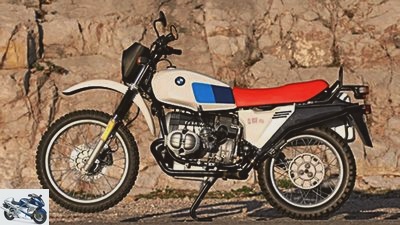 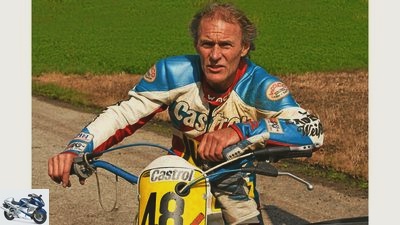 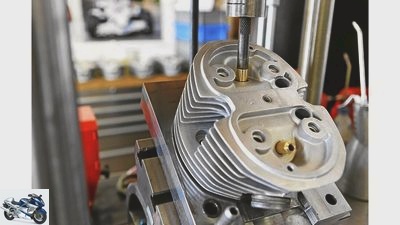 2/25
Pressing: After a bath in liquid nitrogen, the valve guides are pressed in. 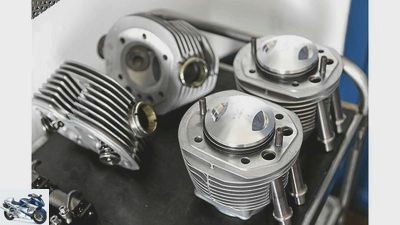 3/25
Installation: the machined cylinders and heads – including forged pistons ready for installation. 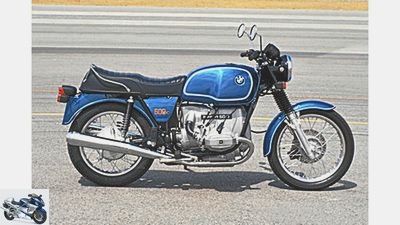 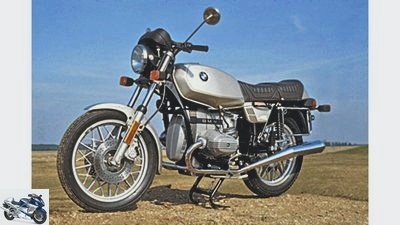 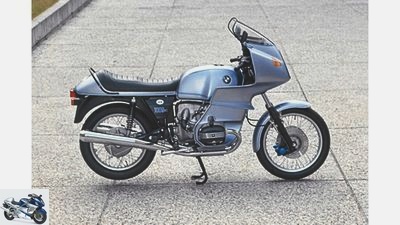 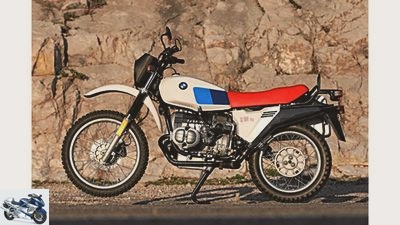 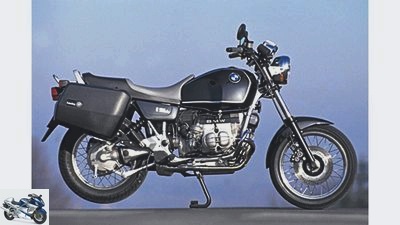 8/25
The late ones: From 1987 a double-articulated swing arm (“Paralever”) took care of the rear wheel guidance, and from 1991 the R 100 R was finally a pure street boxer again. The R 80 GS special model “Basic” was the last two-valve engine. 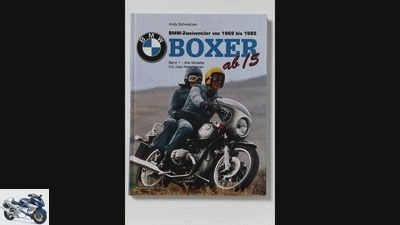 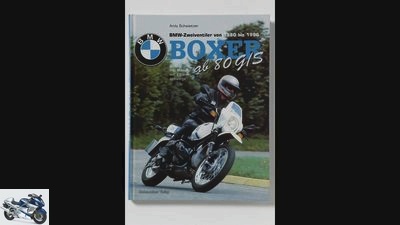 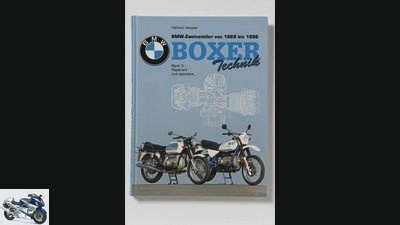 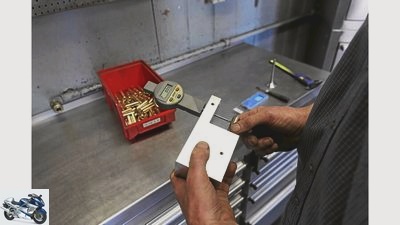 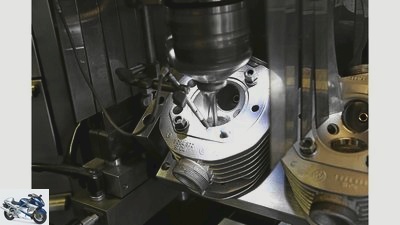 13/25
Milling: The valve seats are machined with a modern CNC milling machine. 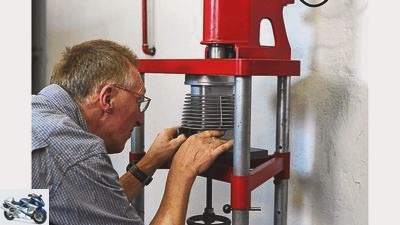 14/25
Drilling and honing: depending on customer requirements, from simple oversize to 1070 cm³. 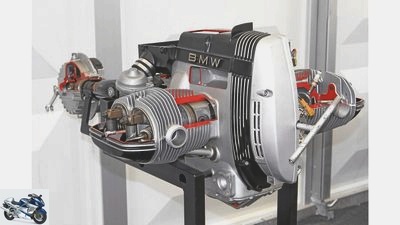 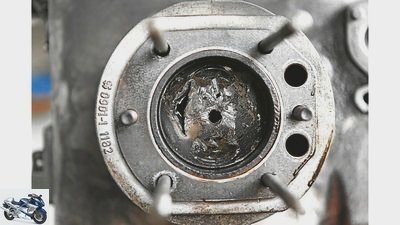 16/25
The classic before picture: This is what it looks like when a valve ruptures causes trouble. 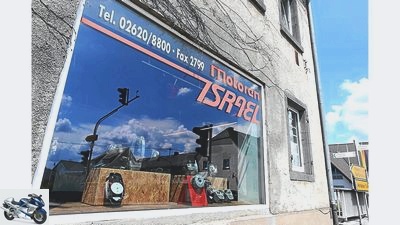 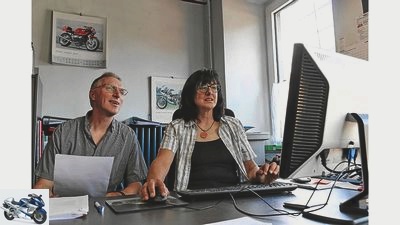 18/25
Incoming orders: In the office, Gert and Silvia Israel discuss the receipt of an order. 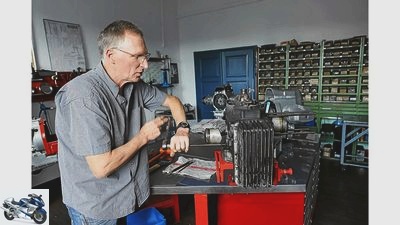 19/25
Dismantling: Every move is seated here, every tool has its own place. 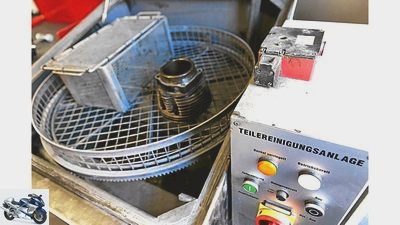 20/25
Cleaning: The components are freed from dirt and oil in the cleaning system. 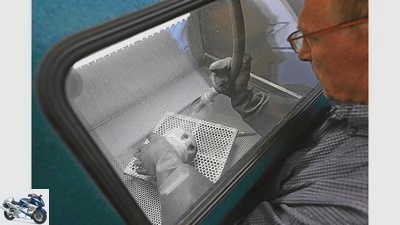 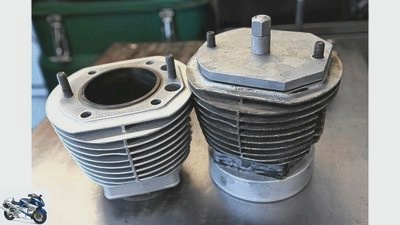 22/25
Like new: right before, left after the blasting – the result speaks for itself. 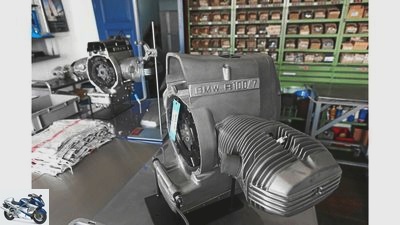 23/25
And done: after three to four weeks, an old-fashioned two-valve engine has become a real prize boxer. More power, smoother running and longer durability are the reward for the effort. 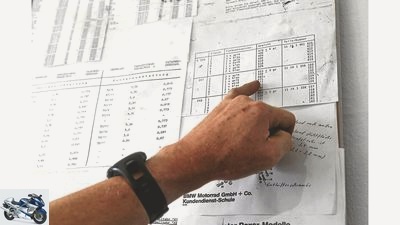 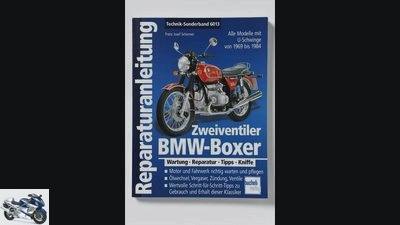 In Neuhausel, Rhineland-Palatinate, Gert Israel helps BMW boxer engines achieve their second spring at the end of their lives. With his striving for perfection, the two-valve expert has earned an excellent reputation. One round.

Germany, Rhineland-Palatinate, southern Westerwaldkreis. We are in the center of Neuhausel, directly opposite the Kreissparkasse. Welcome to the site of Motoren Israel GmbH. Here, in a former cigar factory, Gert Israel has been rebuilding two-valve boxers for over 30 years and helping them to get more smoke. Sometimes a lot more smoke, that depends entirely on the wishes of the customers.

From a simple overhaul with optimized components and the construction of sporty engines with different characteristics to racing engines, everything is possible. “More than 100 HP are possible,” says the trained machine fitter. How it works? A small example from the catalog: Big Bore-Kit with 1070 cm³, lightening and fine balancing of the crankshaft, race-line connecting rod, 344 degree sport camshaft, cylinder head tuning including optimized channels and larger valves, lightened valve train, racing rocker arm, etc …

So naturally aspirated engine tuning of the old school, according to the rules of the art. But mostly the unconditional search for top performance is not the reason why boxer fans give their engine to Neuhausel. “Boxer drivers are frequent drivers,” says Israel, “and they value quality and durability.” Word has long since got around that it is precisely these that are offered here. Orders come in from all over the world. Together with his wife Silvia, head of online parts dispatch and office, as well as two employees, Gert Israel renews an engine per week on average with a throughput time of three to four weeks.

And it usually works like this: The customer brings the removed engine or has it delivered by post. After taking stock of the old engine, Israel will prepare a cost estimate based on the workload and the customer’s expectations. Then the maestro gets to work. If you look over his shoulder, you will receive a lesson in terms of routine, care, precision and attention down to the smallest detail.

In addition to an already completed R 100/7 engine, the just arrived drive of an R 75/7 rests on the assembly bench. These engines have often had a long, hard life behind them: “We have already seen a mileage of 350,000 kilometers,” says the company founder. At some point, however, it will end, be it due to general wear and tear or because a single component has stopped working. In this case, valve rupture caused severe engine damage. The consequences can be seen on the battered butt. But no problem for Gert Israel, who dismantles the boxer with trained hand movements. The heads and valve train are already dismantled, and the cylinder and piston quickly follow before the crankshaft can be removed. He has done this so often that every move is perfect, every tool has its own place.

How did you come to earn a living restoring engines? “In the beginning there was fun in hobby racing.” This led Israel to build its own engines in the early 1980s. “First Honda Fours and Moto Guzzis. Soon we specialized in boxer BMWs. That was the result of the demand. “


Legal situation for tuning measures on the motorcycle

Valve guides are turned off outside and inside

Here and now, the further work steps follow after dismantling. From cleaning to blasting, drilling and honing the cylinders as well as renewing and optimizing the cylinder heads – everything is done by the boss himself and with the same precision as during dismantling. Once all the required components have been refurbished or replaced with new or used parts, the rebuilding can begin.

Israel takes the utmost care, weighs pistons and connecting rods, balances rotating and oscillating masses, liters combustion chambers, measures tolerances and uses specially designed parts to bring the two-valve boxer to its absolute top shape. The valve guides are just one example: “Even when new, the tolerances of original BMW parts are often close to the wear limit. Our valve guides are turned on the outside and inside and therefore have defined, smooth surfaces. That improves the durability. ”It goes without saying that, given such attention to detail, only high-end parts such as light Wossner forged pistons find their way into an Israel engine.

“We have practically no complaints”

It is also clear that such quality has its price. The price list starts at around 2000 euros for a complete engine overhaul. Depending on the previous damage and the effort involved in tuning, this can also result in significantly more – also clearly. “Our customers are interested in technology and appreciate the value of the structure,” explains Israel, “and we have practically no complaints.” The investment pays off, because such an accurately constructed engine is the series engine in terms of smoothness, performance and, last but not least, longevity way ahead. “Building a two-valve unit perfectly is like renovating a half-timbered house,” says Israel over a cup of coffee in the office. “It costs as much as a normal house, and you still have low ceilings and small windows. But the result corresponds completely to your own ideas, has character and soul. “

If you are now toying with lending a hand on your BMW half-timbered boxer, you will find it in the Motoren Israel shop (Tel. 02620/8800, www.motoren-israel.com) a comprehensive range of parts. This has developed into the company’s second mainstay since 2005, and almost half of its sales today come from the worldwide shipping of individual parts. The Neuhauselers’ own designs can also be found here. These include, for example, milled gearshift levers with rollers, one-piece rocker arms that minimize axial play, an oil sump with an extended oil volume or an electronic double ignition. Everything for boxer wellness. 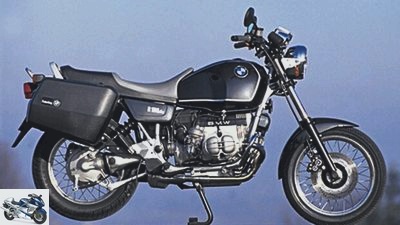 From 1987 a double-jointed swing arm (“Paralever”) took care of the rear wheel guidance, and from 1991 the R 100 R was finally a pure street boxer again. The R 80 GS special model “Basic” was the last two-valve engine.

BMW motorcycles with two-valve boxer engines have of course been around since the 20s of the last century, but this is about the “two-valve modern era”, and it doubtless only began in 1969 with the introduction of the dash five series. In 1996 the two-valve glory was finally over.

The little ones: Driving schools and 27 HP insurance savers were able to make friends with the R 45 (1978–1985, open 35 HP), also known as the “rolling sand dune”. The short-stroke engine with 50 hp in the R 65 worked much more dynamically.

The late ones: From 1987 a double-articulated swing arm (“Paralever”) took care of the rear wheel guidance, and from 1991 the R 100 R was finally a pure street boxer again. The R 80 GS special model “Basic” was the last two-valve engine. 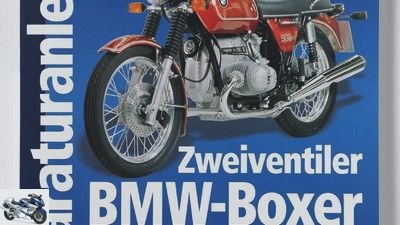 BMW two-valve owners are well supplied with reading forage. Pretty much everything that has ever been published in terms of operating instructions and workshop manuals can be found online (for example about www.2-ventiler.de). But sometimes the good old print shop is still in demand, and there are four books that MOTORRAD particularly recommends:

Andy Schwietzer’s Boxer Volumes 1 to 3 are probably the most detailed and best that has ever been packed between two book covers on the subject of two-valve engines. Volume 1 describes the models with two struts built from 1969 to 1985. Volume 2 is dedicated to one-armed people from 1980 to 1996. Each on 176 pages and for 29.90 euros. Volume 3 (author Helmut Heusler) is the 240-page manual for all models and is worth gold instead of just 34 euros.

The Bucheli technology special volume 6013 (222 pages, 29.90 euros) is a good help in “normal” everyday screwdrivers and closes the gap between the logbook and hardcore screwdriver reading. 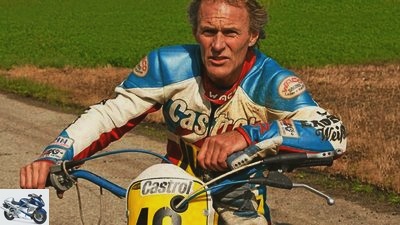 Karl Maier (57) is a four-time long track world champion and has been an authorized BMW dealer in Neufinsing near Munich for over 30 years.

Yes, madness, that is thought transference. The BMW employees have just given me a sign saying “Certified BMW Classic
Dealer “sent. There’s not even a hole to hang it on. You have to do everything yourself …

So BMW has actually discovered the old and youngtimer customers?

Brand new since September 1st. This year BMW brought together the dealers who have an affinity in Garmisch
to have older models. And so on my new sign it says “Parts sales, repair instructions, repair service
for classic BMW motorcycles “.

What is it primarily about – the supply of parts?

More likely to show the customer that there are also official BMW dealers who not only have electric scooters in the front of the showroom and are familiar with water boxers, but who also have two-valve units. And then probably also about networking the whole thing, i.e. being able to tell the customer where they can be helped, even if BMW itself may no longer be able to deliver parts.

How does the workshop business differ between older and current boxers??

You just have to spend a little more time with the older babies. Dismantling and replacing a part here is often not enough. Then one thing leads to another and does not necessarily always work straight away.

What is your buying tip for two-valve beginners? What does the newbie have to pay attention to??

From 1980 onwards, the brakes are simply better, and there are no more interruptions. From 1987 onwards, all tolerate lead-free. And as a specific model, the R 100 GS is my favorite. You can bring them under 200 kilos relatively easily, and then with the Big Bore Kit, something works …