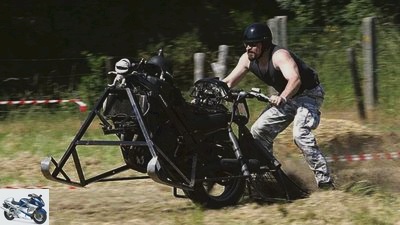 Conventional motorcycle races are too boring? No budget for outrageously expensive dragsters? We have something for you: Simply remove the front wheel of your used vehicle and start the unicycles! MOTORRAD was at a race in Belgium.

The tattooed guy in a robe and jeans is pulling the gas like crazy, and the four-cylinder engine roars as if it’s for his life. Silencer? Unnecessary frills. Then the pilot and bike shoot up and away as if from a catapult, hurling a meter-high torrent of dirt and dust behind them. Exactly 33.48 meters further, the ghost is over again. The record for this sprint in one field is currently 2.45 seconds ?? with a vehicle without a front wheel!

Wait a moment ?? without a front wheel? Exactly! So-called unicycles come without a conventional front structure, and logically there is no handlebar either, just a handle. The driver is somehow hanging over or behind the rear wheel, which is now the center of the vehicle, and his task is clearly defined? In addition to powerful acceleration, somehow keeping the load on course through daring physical exertion: Everything that is in front of the rear wheel must never touch the ground during the sprint. Sounds like a children’s birthday party, but anyone who experiences these frenzied seesaw structures in free flight quickly takes off their hats. A desirable side effect of this type of drag racing: an immensely high fun factor. This relatively young sport comes from ?? How could it be any different ?? from the USA. The man from the very beginning is called William “Sidecar Willy” Nassau, comes from Florida and is a fixture in the American biker scene. In his eyes, the annual mammoth event “Daytona Bike Week” had long since degenerated into a show that was as harmless as it was boring. No real street races, no more acceleration orgies from traffic light to traffic light, none of the tests of courage for real guys. Only rules and prohibitions. And almost exclusively outrageously expensive bikes that travel from show to show on a trailer and are at best suitable for strolling. Time for a change!
Sidecar Willy had the brilliant idea sometime in the late eighties over a beer in his local pub. A drag race on single-wheel bikes. That’s it! The set of rules was created on the way home. One of the ten commandments (see box) only permits the use of engines that are at least five years old for reasons of cost. Willy is convinced that unicycle drag racing should be feasible for everyone and without a large budget. The only requirements: an old carrot and some tools.

For days, Willy tinkered with the original unicycle version in his kitchen that had been converted into a workshop. The first »exit«, however, ended with the pilot crash-landing. Willy’s design suffered from an imbalance between the weight of the engine and that of the driver. And then the thing with the gas. Not enough steam? and the buck goes down in front. Too much pull on the tap, on the other hand, causes the load to lurch back and forth uncontrollably. But giving up was out of the question for the racer.

991 finally the first official appearance during Daytona Bike Week. 100 feet (33.48 meters) in 5.2 seconds. Quite a few spectators were enthusiastic, finally something was going on again! In the same year Willy founded the American National Unimotorcyclists Society (A.N.U.S.). A new racing series was born? even if the whole thing seems much more like gross nonsense than serious sport. Does not matter. In March 2000, the now 57-year-old Willy finally cracked the three-second mark with the help of a 900cc Honda engine, documented in the Guinness Book of Records.

Meanwhile, these races also inspire the old world. Switzerland in particular turns out to be unicycle infected? the fun event there, like in Holland or Belgium, is firmly in the hands of the cowl-wearing motorcycle club scene: the official unicycle world championship has been held every two years by the MC Dead Rider in Sumiswald near Bern since 2002. And since 2006, in the open-top class from 750 cm3 with the “G.7” team, a federal participant has been at the top of the podium: 2.5 seconds was the measure of all things last summer. Up to this point, two German teams had mixed up the scene: The »Friesenfighter« and above all the »Hessische Kampfsau« regularly ironed everything into the ground. But this year’s defeat calls for revenge, no question. So again graze the scrap yards after front damage, screw and weld all night long, do test drives in some fields. Everything is still in the spirit of the inventor.