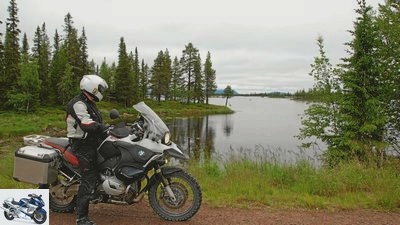 With the motorcycle in Sweden – Lapland

The gravel paradise for enduros
With the motorcycle in Sweden – Lapland

Sweden is a sparsely populated country with an extremely large amount of wilderness, forests and lakes. Here you can also become one with nature on a motorcycle. Jan Leek and Fredrik Lundgren looked for and found the gravel paradise in the north.

The wilderness reigns here. There is an abundance of clear air and pure water. There is no limit to what you can do with a motorcycle. Something like that has to be found in the rest of Europe first. Traffic? The streets are swept empty. A traffic jam occurs when two vehicles happen to stop at Frasses Grillimbiss in Arjeplog at the same time. From Sorsele it is only 73 kilometers to Arjeplog on Inlandsvagen, today E45. But there is a detour, and it consists almost entirely of gravel for 294 kilometers. Sorsele-Arvidsjaur, the hard way.

Jan Leek and his son Bjorn drive with me. On our hunt for the best gravel roads in Sweden we are now in the province of Sodra Norrbotten – Southern Norrbotten. The term “south” so far north seems strange, because shortly before Måskenåive and Fjallnas the frost stings us in the nose.

The gravel paradise for enduros
With the motorcycle in Sweden – Lapland

A gravel straight several kilometers long may not sound exciting, but here it has its own charm. These impressive straights appear again and again between the curves, running up and down in gentle waves. What feels like surfing in slow motion while driving! Sometimes the waves are also steep. Then the handlebars hit the chest violently and suddenly strains the arm muscles. On the top of the hill the motorcycle rebounds completely and we enjoy this weightless moment of free flight. Breathtaking, as are the views.

After 20 kilometers of gravel, we warmed up, the morning fog dissipates, and we switch up. Even if there is almost no traffic, we have to be careful, because reindeer wear camouflage and have a preference for walks on the slopes. Here, near Ammarnas with the two seed villages Gran and Ran within reach, the reindeer density in Sweden is highest. In Gargjaur we turn right and drive past Mjolkberg – Milchberg. The place-name signs change constantly between Sami and Swedish. At Maskaur we continue on the south-western beach of the large lake Uddjaure. Did you know that there are as many islands in this lake as there are days in the year??

After 62 kilometers of entertaining and naturally beautiful gravel stretches, we are at the southern tip of the Uddjaure, where we turn right to Mellanstrom. Four to five gray houses, two of them abandoned and maybe even forgotten. Nevertheless, it is listed as the “correct” town on the map. It is said that Stockholm is one of the most beautiful cities in the world, surrounded by sparkling water. Nothing there, it’s Mellanstrom. This little gem is located here under Mount Gaika, where the two deep bays Valbma and Dvaljan meet. No other place in the world sparkles as beautifully as Mellanstrom. But the range of petrol, restaurants and culture is very limited, which is why we quickly turn right again towards Arjeplog. 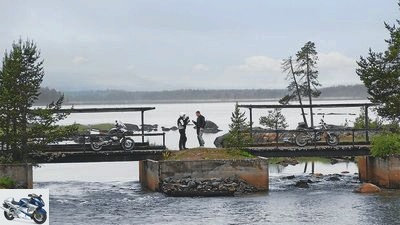 Unlimited freedom in the area around Arjeplog: many more reindeer than people and on hundreds of kilometers of slopes no other vehicles than three motorbikes with happy drivers.

Arjeplog or Árjepluovve, as it is called here in Sápmi (Swedish for Lapland), is the center of silver mining. Not just the center, by the way, but the only town in the area up here. We have now driven 120 kilometers since Sorsele. One could stay here for a day or two to explore the attractive area, which offers breathtaking snowmobile tours during the winter. We could also dare to take a detour on the Silberstrasse towards Norway.

Unfortunately we cannot stay here overnight, the group wants to eat more kilometers today and definitely continue to drive. We eat, refuel the motorbikes and take a look at the city with the silver museum (www.silvermuseet.arjeplog.se) and the lovely pink wooden church. Incidentally, Arjeplog has the only petrol station on our Sorsele-Arjeplog route, which you should take into account when planning. The fuel consumption on the slopes is higher with an active driving style with the rear wheel spinning frequently than with normal enduro hiking, and a few liters of reserve for unplanned detours doesn’t hurt either.

Reichsstrabe 95, the so-called Silver Road, cuts diagonally through the municipality, 350 kilometers away from Skellefteå on the east coast to the Norwegian border. But we only follow it for three kilometers and leave it at the sign “Stenudden 65”. A sign that says a lot about the distances here. Stenudden at the end of the 65 kilometer long, curvy gravel road has just six houses!

But we don’t want to go to Stenudden, because that would be a dead end, but instead set out on a 180-kilometer loop to our destination for the day: Arvidsjaur. The first five kilometers are asphalt. The road balances on narrow headlands between the 70 kilometer long Lake Hornavan and the smaller Kakel Lake. Then there are tons of gravel in front of us. 120 kilometers of piste without crossings or branches make the look at GPS or maps superfluous. What remains is pure off-road enjoyment: curves, hills, and no traffic is to be expected.

The long loop is not only worth the trip because of the driving pleasure. Only here are we really in the wilderness, in true Lapland with its great nature. Initially, the piste runs between countless lakes of all sizes, from tarn the size of a dancefloor to large, azure blue oceans with white cloud reflections on the surface of the water. Then the path curves around the exactly 700 meter high mountain Kartevare, but continues to follow the south side of the lakes Saddajaure and Vuolvojaure. 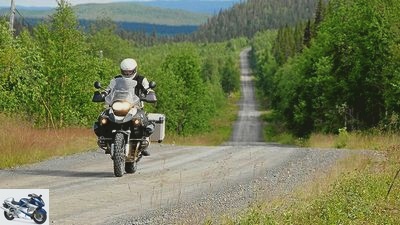 As soon as we have these two lakes behind us, we are already driving through dark forests again. The landscape becomes even more hilly, which again puts more strain on the suspension of our motorcycles. Pitealv flows past on the left, on the right – who would have thought that? – small lakes appear with regularity. Ten kilometers after the crossroads in Suddesjaur we take a longer break. Here lies one of the cultural highlights of our entire tour in the form of a very serious museum: the unique Stromnas Snowmobile Museum. Stromnas is nothing more than a handful of houses. In an old stables, a fantastic collection of snowmobiles awaits visitors, ranging from the early days to well into the 1980s. The history of snowmobiles is not as old as you might think. After a few attempts in the 1950s, the actual development did not take place until the 1960s. In the 1970s the scene exploded, and by the 1980s the modern snowmobile was roughly up to current standards. There are more snowmobiles than motorcycles in Sweden these days.

The collection also includes tools for tough operations in a snowy environment, such as primitive chainsaws and motorized ice drills. Only ten kilometers further we are in the Reivo nature reserve, almost ten square kilometers in size. After a devastating fire in 1966, the forest was left alone and has largely recovered since then. Such fires occur regularly even without human intervention. As a result, however, they can mean that some tree varieties recover faster than others and that an undesirable monoculture is created. A part of the reserve has therefore been declared a World Heritage Site as a real primeval forest.

After Reivo, we only have 30 kilometers of gravel entertainment left until we reach Arvidsjaur. With a population of 5000 people, the place is almost a metropolis for this area with a wide range of outdoor activities, shops, restaurants, cinemas and hotels. The “Hotel Laponia” entices with overnight stays in a luxurious ambience, but we choose a hut at the Camp Gielas campsite.

In summer Arvidsjaur is a stop for North Cape tourists and in winter it is a large test center for the car industry. We are now 110 kilometers south of the Arctic Circle again, but a short time ago we approached the magic circle in Vuolvojaure to 15 kilometers. The name Arvidsjaur is derived from the Sami “Árviesjávrrie”, which simply means that the local lake contains an incredible amount of fish.

We spray the motorbikes, hang the clothes in the drying cupboard, eat reindeer on dough, treat ourselves to two pils and take stock: the shortest route between Sorsele and Arvidsjaur would be quickly unwound on 73 kilometers of asphalt road. We have extended the distance between the locations to 294 kilometers, most of it on gravel through pristine wilderness. We will live on that for a long time now. 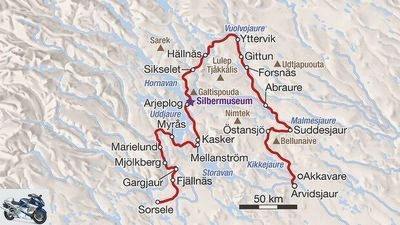 Around the northern Swedish municipality of Arjeplog in the Silberland there is only wilderness, water and endless paths. Nature-loving motorcycle hikers are spot on here.

General:
3100 people live in the Arjeplog district, which corresponds to a population density of only 0.24 people per square kilometer. For comparison: In the federal state of North Rhine-Westphalia, 523 people live in one square kilometer! Silver was discovered on the Nasafjell in Norway in the 17th century and mined between 1635 and 1659 and from 1779 to 1810. Traces of silver mining can also be found everywhere in Arjeplog. From the 800 meter high Galtispuoda you can enjoy a magnificent view of Sorsele, Jokkmokk, Arvidsjaur and Saltdal (Norway). Most of Sweden’s reindeer roam around Ammarnas. The region’s economic prosperity is not only due to the intact nature and tourism, but above all to the activities of the German automotive industry, which researches and tests here in winter and requires infrastructure.

surface:
Arjeplog is in fourth place in the ranking of the districts in all of Sweden with 12,945 square kilometers behind the districts Kiruna, Gallivare and Jokkmokk.

Waters:
There are 8,727 lakes in Arjeplog County, i.e. 2.5 lakes and three kilometers of beach per inhabitant! Hornavan is the deepest lake in Sweden with a water depth of 226 meters, has 400 islands and stretches over 70 kilometers. The water in nature is drinkable everywhere here, and the taste of the abundant fish population is unique.

Nature parks:
A national park and 13 nature reserves including an animal protection area cover around eleven percent of the municipal area or 150,210 hectares.