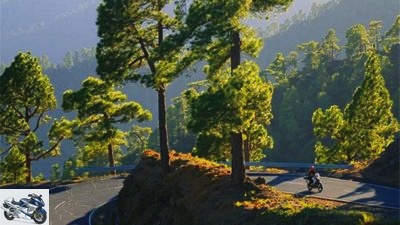 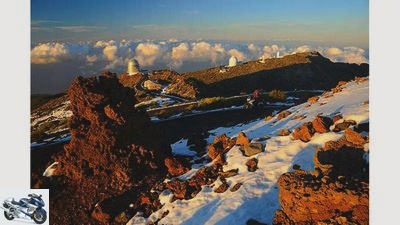 1/23
A motorcycle trip across the Canary Islands: La Palma. Everything you miss in the German winter. 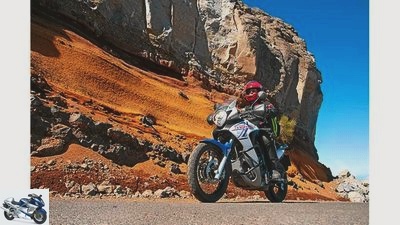 2/23
The island is explored on rough ground. 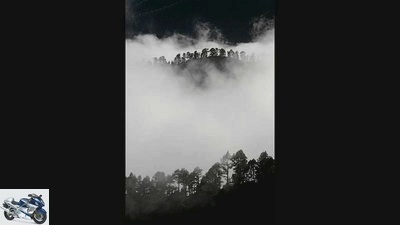 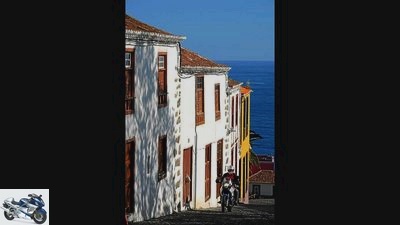 4/23
Historic, picturesque and quiet: The small town of San Adres is located directly on the sea in the middle of the “Banana Republic” on the northeast coast. 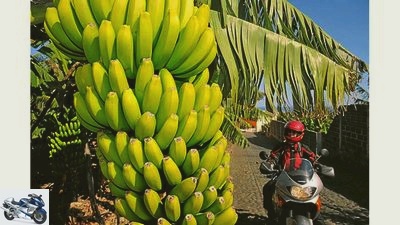 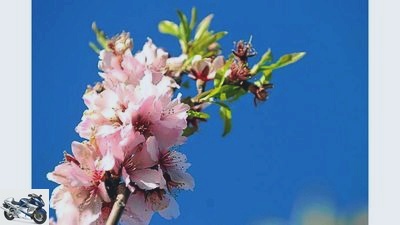 6/23
Beautiful flowers under a blue sky. 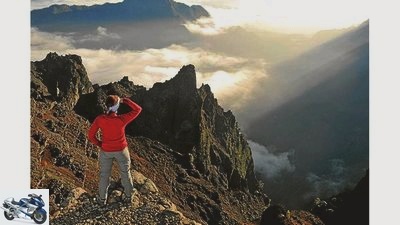 7/23
The view from the crater rim at Roque de los Muchachos down to the Caldera de Taburiente is breathtaking. 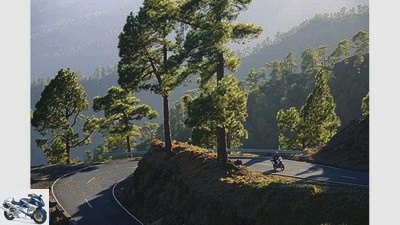 8/23
Streets with maximum potential for addiction. 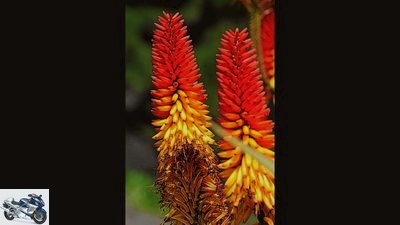 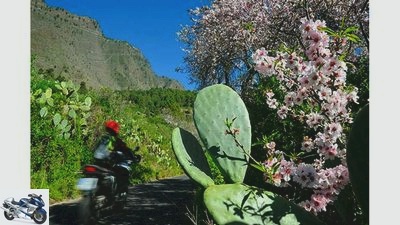 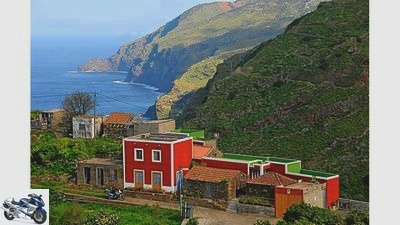 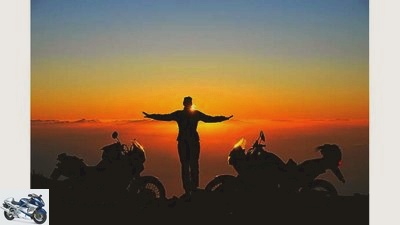 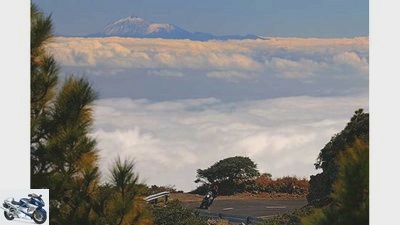 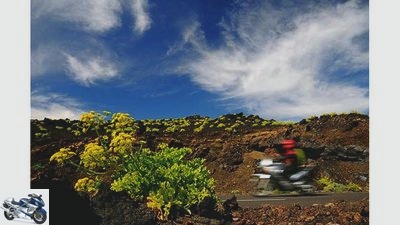 14/23
In the far south the island is geologically very young. The first pioneering plants are taking root on the rough lava surfaces, which are probably not much older than 200 years. The wind blows the smell of sulfur from the nearby Teneguia volcano. 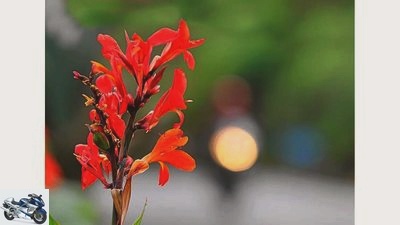 15/23
The wonderful nature can be admired along the way. 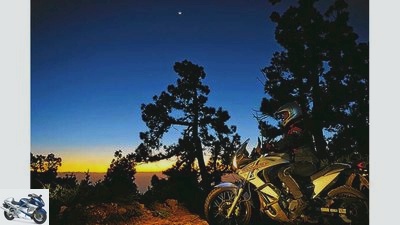 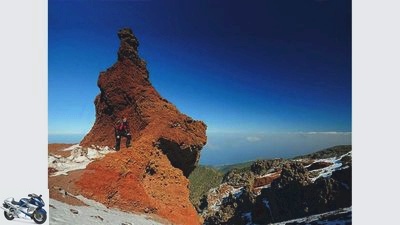 17/23
La Palma’s volcanoes have created a fantastic world. In winter, snow fields decorate the bizarre lava sculptures on the roof of the island. 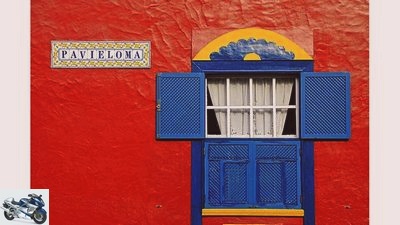 18/23
Picturesque towns are to be explored. 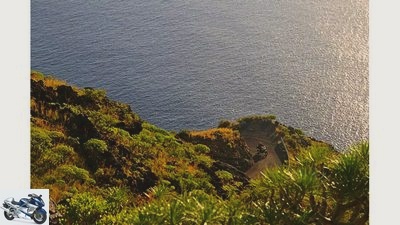 19/23
The finest comfortable temperatures prevail down by the sea. 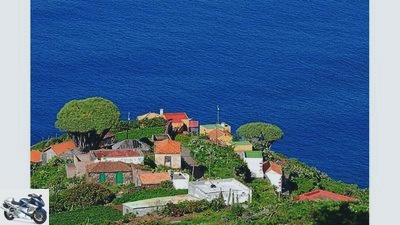 20/23
Maybe we should just burn our return tickets. 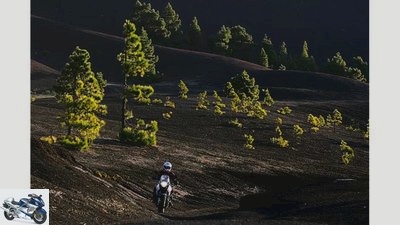 21/23
The studded tires of the Transalp crunch in the coarse ashes: a piste in the strange landscape of the Llano del Jable. 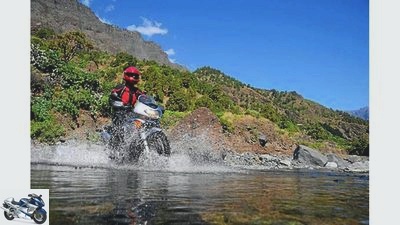 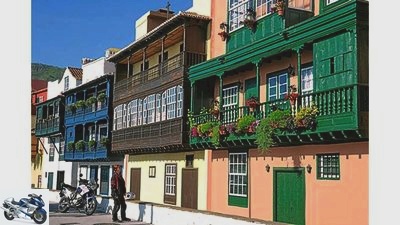 Not in the mood for winter, rain, cold and darkness? Then the little winter escape to the Canaries is ideal. La Palma – the beautiful island – has everything you missed in German February.

What distinguishes a motorcycle paradise? Temperatures in the comfort sector beyond 20 degrees, sun, grandiose landscapes, exciting mountain roads where the proportion of boring straights fails to pass the five percent hurdle, little traffic and an infrastructure that enables relaxed travel. Utopia in Central European February? Sure, but only a four-hour flight away, the winter world is different. Yesterday morning I was still shoving snow, now I can see mine in the rearview mirror Transalp three more Hondas dancing with the mountain road. We pilots – Andrea, Birgit, Nico and Jo – have one thing in common: the wide, permanent grin on our face, the enthusiasm to finally drive again under optimal conditions.

The topography of La Palma is a promise in itself. A long and almost 2000 meter high mountain ridge with innumerable volcanic craters rises from the Atlantic Ocean at the southern cape, divides the island on its way north and finally swings into a huge semicircle, the Caldera de Taburiente, guarded from the highest point of the island the 2426 meter high Roque de los Muchachos. Wind, weather and volcanic eruptions have cut deep gorges, barrancos, into the flanks of the mountains, forcing the road builders to take adventurous routes.

As an aperitif for our cruise, we set course for the southern tip of the island, young country, born only 41 years ago. At that time, the brand new volcano Teneguia was created, spitting fire, ash and lava for 26 days, which flowed down into the sea. This new piece of earth still looks like the volcano only went out a few weeks ago. Red, yellow and brown chunks of lava form a desolate labyrinth. The earth breathes its stinking breath from crevices in the porous soil, hot enough to burn its fingers.

A narrow slope climbs from Teneguia through a sparse pine forest up to Las Indias. The coarse-grained black ash crunches under the tires of the Transalp until the rubbers find reasonable grip again on the well-paved LP 1 ring road. The LP 1 circles the island, needs about 180 kilometers and what feels like 5000 curves. Only the section around the capital Santa Cruz is annoying, the rest is pure enjoyment. The east side of the island is garnished with small colorful houses, pretty towns, palm trees and fields. The lush vegetation is sub-tropical green after the winter rains. Trade wind clouds crash against the mountains from the northeast.

Only occasionally does one of the brown peaks float far above the clouds, appearing immensely high and inaccessible. We want to go up there, to the highest mountain in La Palma. After Santa Cruz we turn off and head for the dark wall of the mountains. 2400 meters of altitude lie ahead of us, a dream road that can easily compete with the best alpine passes. Like a ball of wool that a cat has played with for hours, the tar ribbon curls uphill through the forest of old, gnarled pines. Until suddenly the clouds swallow us up.

Zero visibility, it’s cold and wet. Wasn’t it still spring? We slowly feel our way through the laundry room. So this is what trade wind clouds look like from the inside. Now what should we turn back? Or poke a few curves further in the fog according to the principle of hope? Isn’t it getting brighter over there? And whether, suddenly we rush out of the gray damp mush, are blinded by the warm evening light. Below us the clouds lie like a huge sea of ​​soft, white cotton wool, crash against the mountains and enchant the mighty pines in the backlight into fabulous creatures. 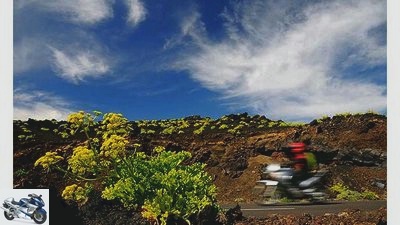 In the far south the island is geologically very young. The first pioneering plants are taking root on the rough lava surfaces, which are probably not much older than 200 years. The wind blows the smell of sulfur from the nearby Teneguia volcano.

Patches of snow line the last few meters of the road up to the summit plateau. A few more curves, then we park the Transalps directly on the vertical edge of the Caldera de Taburiente. Complete silence, no one far and wide apart from us. The wet jackets steam in the sun. The semicircle of the crater spreads out in front of us. Jagged rocks plunge almost two kilometers into the depth. Down there, protected by the huge mountain basin, a lush flora thrives. But nothing of that can be seen now. The clouds just block out the world down there. Only the highest mountains protrude from the fluffy white sea. Far. In the southeast we can even see the snow-covered peak of Spain’s highest mountain, the 3718 meter high volcano Pico del Teide on the neighboring island of Tenerife. An unearthly beautiful panorama.

The summit plateau of the Roque de los Muchachos also seems out of this world. A pack of UFOs has chosen the barren landscape as a landing site. What looks like the invasion from space is much more used for exploration. Star explorers search for black holes and distant galaxies in the silver domes of the observatories. The extremely clear air ensures optimal conditions. To keep it that way, the island’s government has passed a unique law against light pollution, stipulating the places in La Palmas which street lamps and neon signs are allowed.

The closer the sun gets to the horizon, the colder it gets up here. Nevertheless, we wait until it is completely dark on the moonless night and let ourselves be fascinated by the silent, heavenly star spectacle. The noise almost hurts when we finally start the Hondas to wag through the labyrinth of curves down into the spring on the west coast, where we find a small restaurant so late in the evening. Lukewarm wind rustles through the palm trees, accompanied by the gentle rustling of the waves on the black beach. Cicadas start their evening concert, disturbed by the croaking of the frogs. Kitschy but true. Winter nights can be something nice …

The next day we take on the north coast. Do I have to mention that there are also curves here? Normality on La Palma and perfect terrain for the new Transalp, which is noticeably and audibly more fun than its 650 predecessor. The north is well watered thanks to the trade wind clouds. Lush mosses, trees, flowers and ferns. Small waterfalls plunge into deep gorges from the dense laurel forest. Every now and then we come across ancient dragon trees, strange plants that were sacred to the indigenous people, the Guanches. The Guanches would certainly have shown less respect for the monotonous banana plantations on the northeast coast. 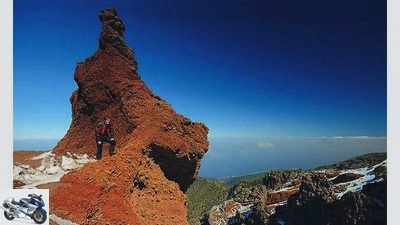 La Palma’s volcanoes have created a fantastic world. In winter, snow fields decorate the bizarre lava sculptures on the roof of the island.

Standard-compliant bananas are grown here in huge and ugly greenhouses. After seeing the roof of the island and experiencing the ground floor on the coastal road, it’s time to take a look at the first floor: the interior of the Caldera de Taburiente. A narrow tar track leaves Los Llanos, first crosses another banana republic, then a crystal clear river and climbs steeply up the edge of the Los Angustias gorge. Pines, almond trees and cacti narrow the path, which ends after 15 kilometers at the Los Brecitos viewpoint, which floats like a balcony halfway up the gigantic amphitheater of the caldera. Streams babble 1000 meters below us, and snow remains stuck in the rocks 1000 meters above us. Every steep wall is covered with ferns, bushes and flowers. Again such a little paradise, a world of its own, closed off and protected by the three-quarter round of the crater walls. Speaking of paradise, it’s February, the thermometer shows 23 degrees, and the Hondas are just waiting for the next mountain road. Maybe we should burn our return flight tickets and just stay here – on Isla Bonita. 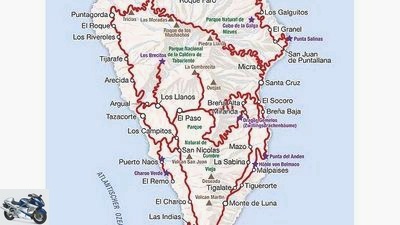 From the larger German airports, various charter planes jet almost daily directly to La Palma. Tickets are available from around 300 euros, as a special offer even from 200 euros. The flight time is about four hours.

La Palma is one of the rainiest islands in the Canaries, but that doesn’t take away from the charm of the perfect winter escape. The high mountains form an insurmountable barrier for the trade winds approaching from the northeast. Short and heavy showers are therefore possible, especially on the north and east coast, in winter. Along the coast it gets about 20 to 22 degrees warm in winter, in summer the mercury can reach up to 30 degrees.

In most places you can find simple rooms from around 20 euros. There are also numerous apartments that can be booked on a weekly basis through travel agencies. Those who rent motorcycles from Autos Soyka can also reserve inexpensive apartments in Los Llanos here. Los Llanos or Santa Cruz are suitable as a base camp because all points on the island can be easily reached from here.

La Palma is a paradise for trekking enthusiasts. A variety of exciting hiking trails run through the island. The most impressive route runs from the southern tip of the island along the ridge of the Cumbre Vieja (Ruta de los Volcánes) and then circles the Caldera de Taburiente. When the weather is nice, a terrific experience for which four to five days should be planned. On day trips you can explore the mountains inside the Caldera de Taburiente.