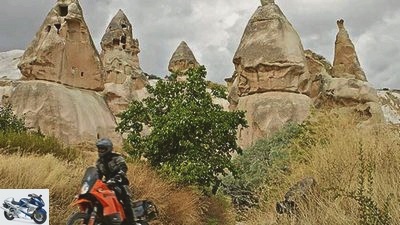 Across Turkey by motorcycle

Once across Turkey. Almost a trip around the world, because the country is a world of its own: Idyllic coastlines, bold roads, scenic diversity, ancient cultural assets and extremely hospitable people spice up the tour.

We’re almost there, almost. If it weren’t for this metal barrier in front of us, the toll station machine next to us and a mile-long line of cars behind us. An extremely inconvenient place for all those who do not have the appropriate magnetic card. We actually wanted to end up at one of the cash booths, but the heavy traffic on the Istanbul city motorway and especially our ignorance have now put us in this awkward position. A resourceful magnetic card seller, surely noticed by the horn that got louder and louder, smells his business. The occupants of the following cars are terribly upset. Before I even understand it, the barrier suddenly opens and the man in the smart suit, who suddenly appeared, starts to run the hurdles over several barriers back to his car. Another quick wave, then he’s gone. He recognized our situation and spontaneously paid our toll debts. Our way is clear and now leads right into the middle of the twelve million metropolis. We swap enduro boots for street shoes and mix in with the life of the city on the Bosphorus. The Narrow Sea is a major artery of Istanbul. A multitude of large and small ships constantly cross the current, bringing commuters back home or sailing tourists along the banks. Before we go to the big visitor magnets such as Hagia Sophia or the Blue Mosque, we use the waterway to get a better impression of the city divided between Europe and Asia.

After a few days of city life, we clear the motorcycles from a thick layer of dust and line up on the congested arterial roads to the east. At Sapanca we leave the wide belt of asphalt. It goes to the southwest, into the western Anatolian interior. The landscape becomes hilly, partly mountainous. Little is going on on the street. We pass individual tractor teams that bring in the last harvest from the sun-scorched fields. White signs with the names of small towns caught our attention. If you follow them, you can zap your way through the whole repertoire of Turkish road construction. At some point only gravel roads connect the individual settlements. Children wave enthusiastically to us. A shepherd gives a friendly greeting as we pass his flock. His dog, a huge kangal, doesn’t let us out of sight. With his collar studded with iron spikes as long as a finger, he looks really terrifying. As the shadows grow longer, we settle into a harvested field. Far and wide not a soul. Only a few dogs bark at the full moon in the distance. I have to think of the Kangal and find it difficult to sleep.

In Eskisehir we want to replenish our supplies and are looking for a bigger supermarket. Right, then left again. Suddenly there is a red light on the curve. I brake hard, trying to keep to the right to make room for Ellen, who was just behind me. An engine roars and Ellen slides, half lying under her machine, into the curb. She is unlucky that a number of small oil droplets have settled exactly in her track. I expect various broken bones, but we are very lucky. A cracked front fender, various scratches on the machine and a rapidly developing play of colors on the right thigh seem to be the only consequences of the departure. 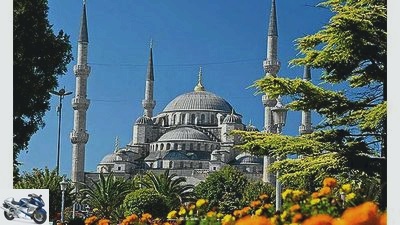 At Pamukkale, the mercury column has almost reached the 40-degree mark. But we don’t want to miss the natural spectacle of the white limestone terraces and trudge barefoot up the wet slopes together with hundreds of other tourists. Finally we succumb to the longing for cooling and set off towards the sea to the south. We’ll find it on the Lycian coast. Just as we reach the accommodation, it is raining heavily. We landed at Patara, a quiet place with a wonderful beach, 16 kilometers long and 400 meters wide. The section of coast owes the prohibition of any building to the Caretta Caretta, a species of sea turtle that values ​​the area’s sand dunes as an egg-laying site.

From the coast we head roughly eastwards. If you look at the dimensions of Turkey on the map, there are still almost 2000 kilometers between us and the eastern border with Iran. We are making rapid progress across Lake Egirdir and Konya. Only refueling always takes a little more time. “Cay?” Is always the motto. For us, the sweet black tea is a welcome change and an expression of the warm hospitality of the Turks. The interest is great, the linguistic commonality is very limited. Sometimes the English-speaking sister is consulted on the mobile phone, sometimes the son’s textbook is dragged along or the matter is simply illustrated on the back of the bus timetable.

On the long way to Aksaray, the silhouette of the Hasan Dagi volcano soon appears in the distance. Together with his two brothers, he is made responsible for the creation of the fascinating, almost surreal tuff landscape of Cappadocia. Violent eruptions, the ravages of time and various weather influences created a bizarre world of tuff pyramids and other rock formations. The narrow gorges are wonderful to hike through, and again and again you come across dwellings and cave churches carved into the rock. Before sunrise I am awakened from sleep by an irregular hissing sound. When you look out of the tent, the sky is covered with a multitude of colorful balloons. At the lower end there is a basket with 20 passengers. I watch for a while and am amazed at how skillfully the balloons are maneuvered through the narrow gorges.

The path up to Nemrut Dagi, the throne of the gods, offers a stark contrast to the endless asphalt belts of the Central Anatolian inland. The cobblestone street winds up in tight bends. Perfect motorcycle conditions, actually. If it weren’t for these small imperfections. I’m freezing, I’m still dog-tired and can barely see the road through the fogged visor. A clean line is out of the question. Fortunately, nobody sees it. The host of the inn had woken us up before five o’clock so that we could experience the sunrise on the summit. We are still late and have to hurry. The last few meters we stumble through the rock in our cross boots and reach the east terrace on the summit just in time. The cool blue on the horizon quickly gives way to the warm orange of the first rays of the sun. The foothills of the huge Ataturk reservoir can be seen deep down in the plain. The view takes away the last bit of tiredness. 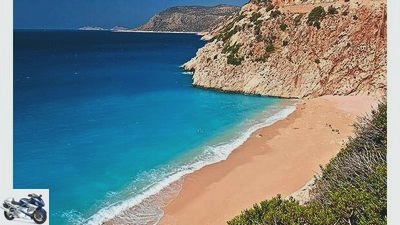 The descent is worlds better. With warm limbs, it is clearly a runaway. We take the momentum with us into the valley and are only slowed down by the ferry boat that operates here at the water. The loadmaster places us in the first row on the loading ramp of the barge. Less than 15 minutes later we roll off the ferry again. Via Siverek and Diyabakir it goes quickly through the Harran plain. There is currently massive investment in road construction.

A two-lane route is a must. At Silvan’s we are already so dusty as if someone had covered us with powdered sugar. Gradually the eastern foothills of the Taurus Mountains appear on the horizon and bring us back up again. The wide grassy areas are repeatedly speckled white by small nomad tents, as if a painter was in a hurry here. At some point the Nemrut Dagi comes into view in the distance. Not that we drove in circles.

The namesake of the divine throne rises above the soapy, soda-rich water in the southeast of Lake Van. The road follows the course of the south bank for a few more kilometers, then it climbs up into the middle of the rugged mountains. Strong gusts of wind grab us at the Kuskunkiran Pass, shaking our fully packed machines. Now and again we pass military checkpoints, constant companions in this region. The posts reinforced with sandbags are fully occupied, and under the steel helmets young soldiers’ eyes are watching us attentively. At Bahcesaray, the gravel road runs like a roller coaster through deeply cut green valleys and over bare passes. Driving fun, almost a rally feeling in its purest form. Just as the sun disappears behind the horizon, we reach the crater rim of Nemrut Dagi and look into the caldera with its lake of melted ice. We want to pitch our tent down there. We’re almost there – and this time no metal barrier is guaranteed to block our way. 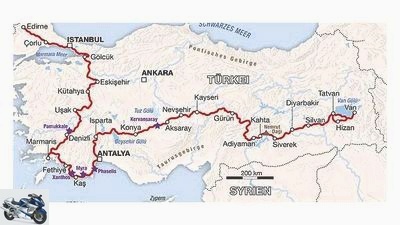 Turkey is more than just a country: From Istanbul, the pulsating gateway to the Orient, over the Mediterranean coast to the bizarre tuff landscape of Cappadocia to the lonely highlands of Southeast Anatolia, there is a whole world to discover.

Getting there:
There are currently two ways to travel to Turkey from Germany with your own vehicle: overland (approx. Three to four days from southern Germany) or with the “Optima-Express” Villach-Edirne motorail train. The train ride takes 30 hours. Timetable and online booking at www.optimatours.de. The cost of the trip (one way, per person and motorcycle) is approx. 250 euros in a six-person compartment. The shipping company Marmara Lines discontinued the Ancona-Cesme-Ancona route in 2011. According to the shipping company, it is currently not foreseeable whether the service will be resumed in 2012.

Travel time:
If you want to travel all over Turkey, you should do so in spring or autumn, when the climate conditions throughout the country are pleasant for motorcycle travelers. It is not too hot on the coast and in the western or southern Anatolian inland, and the mountain passes of the central and northeastern Anatolian inland are free of snow. In May and October, however, it can still be or be quite fresh there.

Documents:
A passport that is still valid for at least six months is required, in which the vehicle is entered upon entry, as well as a green insurance card. Since most insurers do not include the Asian part of Turkey, it is best to take out temporary additional insurance (around ten euros per week) at home. International driver’s license and vehicle license are not required.

Motorcycling:
The conditions on Turkish roads are sometimes a bit chaotic, but the roads themselves are often better than in many EU countries. In Central and Eastern Anatolia there are few curves, while on the coasts and in the mountains you can enjoy the curve robbing. Road closures are completely unknown, so off-road fans get their money’s worth: a seemingly endless labyrinth of nature trails in the Taurus Mountains up to an altitude of 2500 meters, in Central Anatolia long, fast passable and in the east again very curvy, reaching up to 3000 meters Slopes. The fuel prices are tough: a liter of gasoline costs over 1.80 euros.

Stay:
There are numerous campsites, guest houses and hotels of all price ranges on the Turkish Mediterranean coast and near the main attractions. The further you go inland and to the east, the smaller the choice. Free camping is possible away from private property and national parks and especially in the lonely inland.

Money:
The currency is the New Turkish Lira YTL (current rate: 1 Euro = 2.45 YTL). Cash can be withdrawn with credit and mostly also EC cards in all major locations. As a direct means of payment, credit cards are only accepted without problems in large hotels and tourist strongholds.