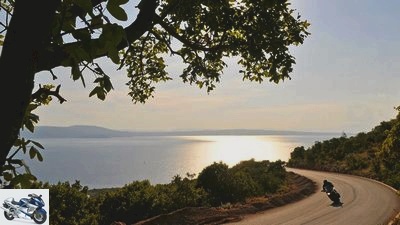 Around Rijeka Croatia by motorcycle

Out and about with a motorcycle in Croatia
Sun, water, hot curves

Some know it as a cheap holiday paradise on the Adriatic, others come because of the racetrack with endless grip: Either way, northern Croatia around Rijeka promises a hot trip.

Sometimes history overtakes even the fastest motorcycle. Between 1978 and 1990, races for the motorcycle world championship took place 13 times on the Rijeka race track – official name: Automotodrom Grobnik. The Grand Prix planned for June 16, 1991 was canceled because of the outbreak of the Yugoslav Wars. The rest is known. And shouldn’t be chewed on for the umpteenth time. Nevertheless, Marcus and I have to swallow for a moment and sort out a few years when, on our first visit to a restaurant on this tour of Croatia, the friendly wait staff casually said: “I was in Germany during the war.” Emina was 23, was born in Bosnia, grew up in Stuttgart and is now shortly before graduation as a Master of Economy. The job in the hotel is used to finance their studies.

Our comfortable main quarters for the next few days is the one from the k. u. k. “Hotel Bristol” in Opatija from the era. Croatia’s oldest seaside resort is brimming with stucco-adorned buildings, even more so than neighboring Rijeka. In addition, lush, subtropical vegetation, in whose green tones our Kawasaki Z 1000 SX, shimmering like an exotic lizard, blends in harmoniously.

Get out of the city and head to the Brestova ferry port. Cypresses poke into the blue sky with their tips, yachts set sail, and as if that were contagious, the oats can quickly sting you on the winding, well-developed coastal road. Especially when the ferry to the island of Cres is about to leave. On board the ship there were also some colleagues in cross gear, an unmistakable indication of the region’s suitability for off-roading. 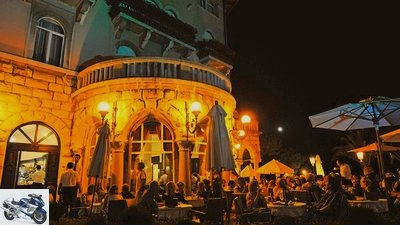 They have surely discovered us long ago, the griffon vultures native to Cres. They scan the landscape for kilometers in search of carrion, as a welcome greeting a pair of feathered journeymen circles over the newcomers who have come off the ferry in Porozina. Anyone who would like to look into the sharp eyes of representatives of the flying waste disposal command will find the opportunity to do so in the eco-center in Beli, which is run by environmentalists. Once the vultures and tin snakes have disappeared, it is easy to feel as though you are alone on the barren island. What a deceptive idea. As soon as the motorbikes fall silent and park somewhere on the shoulder next to thorny maquis, the monotonous staccato of the south sounds thousands of times from tiny drum organs. What is the quivering chatter in a cold Germany against this clatter of perfectly camouflaged cicadas? But who goes to the sea just to listen? Idyllic bathing bays beckon, the water shines from bottle green to turquoise to ink blue. 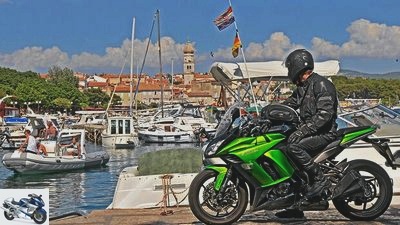 Intense sensory impressions: the picturesque harbor basin on Cres in the main town of the same name on the island.

Wherever the odyssey finally takes you: on Cres there is no way past the main town of the same name on the island. Cafes and restaurants frame the picturesque harbor basin, but we shouldn’t miss the last ferry back to the mainland, where in Opatija the “Pizzeria Roko” leaves nothing to be desired or stomachs empty until one at night.

Krk, the largest of the Croatian islands, can be reached either via an imposing, 1,300-meter-long bridge or by ferry from Cres. The same procedure as yesterday: Bathing bay casting and inspection of the island’s capital, with sports touring in between. Life can be so simple. And how good that the sweaty motorcycle clothes are opaque, in contrast to some dresses. On the beach of Glavotok, an old freak invites us to a boat trip with a picnic in a secret bay, supplemented by the request to be able to take a ride on the beautiful moped. Since that would probably have been the end of the day, it is time to see you and leave for the port of Krk. 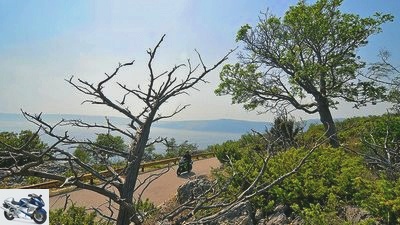 Instead of pondering why there is already a similarity of names between the city and the island, we study the hustle and bustle at the boat gas station. The gas pump on the quay wall is a real challenge. Some recreational skippers can’t get the line to moor up on land and turn off on the fourth unsuccessful attempt to throw, while others get stuck with the shrouds on the anchor of the fishing cutter “Virginia” while navigating in the harbor basin. If you charter a boat on vacation, you won’t become a captain on a long voyage any more than the pilot of a rental scooter doesn’t mutate into Valentino Rossi. Speaking of prominent contemporaries: 49 BC. The fleets of Caesar and Pompeius fought a sea battle in front of Krk. A stroll through the old fortress town might be steeped in history: Sometimes you prefer to sink into the armchairs of the “Casa del Patrone” bar, enjoy chilled music, a panoramic view of the marina and old town and great apple pie.

Sports touring is still missing. Past wakeboarders and water polo players, who have their blue playing fields in the Bay of Punat, we burn through the mountains to Stara Baška. A five-star route, roller coaster ride between glowing stone desert and promising cooling waters.

“Tunja, Tunja” – that’s what it used to be said when schools of tuna got lost in the bay of Bakar. As soon as the fish were sighted from specially built observation towers, the tuneras, the bay was sealed with nets and the great halali began. Today the wooden ladders protruding diagonally over the water are nothing more than a folkloric relic, the Adriatic has long been as empty of tuna as the four-in-nothing Marshall exhaust system of a local hero who pops through the nightly Rijeka with the motto “shorts and sounds”.

Saturday morning. Weekend wherever you look. The coast road jam-packed down to Senj. So that it doesn’t crash too often on the once adventurous autoput, there are plenty of prophylactic race directors on the road, mostly on a BMW R 1150 RT. So cruising mode is the order of the day. Our chance to at least give the synapses some steam. So: Large parts of the coast and islands are karst, because humans were quite nasty to nature, cut down all the beautiful trees and built ships from them; not to mention the pillars for Venice. As if it were blowing directly from Italy, Gianna Nannini’s “Bello e impossibile” will melt hearts in any open beach bar. The infamous bora is anything but a mild breeze, a treacherous wind in the northern Mediterranean that can clear entire campsites out of the blue.

We flee on the serpentine 23, up to the Vratnik pass and on towards Plitvice Lakes. Then course correction to the northwest and at Prokive off to Krivi Put. The cracked road is super narrow and introduces us to as many chickens as the Kawa has horses. The culmination point of rural life is in Nicona: a prehistoric tractor, two pigs, three haystacks, not a handful of houses and Snježana, which means Snow White. Waving wildly, she stops us, introduces us to her family and invites us to a slivovitz. Before Marcus or I are forcibly married, we flee again to the mountains and later to the Autodrom Grobni, where superbikes fight for lap times in front of an imposing mountain backdrop.

PS: Sometimes the story overtakes even the fastest editorial team. When this report is printed, Croatia is almost part of the EU. The only question left is: which hotel will Emina manage then? 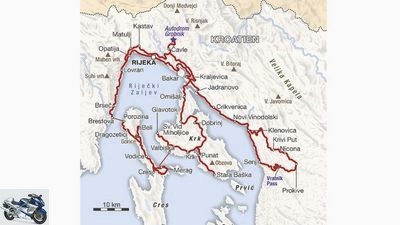 A visit to the race track, island hopping, a beach holiday – northern Croatia around the Kvarner Bay near Rijeka offers just the right mix for varied days. Sometimes as early as spring.

getting there: From Munich it is about 520 kilometers to Rijeka via Salzburg, Villach and Ljubljana via toll highways and various toll tunnels. For those traveling further from the north, the motorail train (www.dbautozug.de) to Villach may be worthwhile, from where it is still 210 kilometers to the destination.

accommodation: A good 20 years after the outbreak of the Yugoslav Wars, Croatia is what it was before. A popular holiday destination on the Mediterranean with a correspondingly diverse tourist infrastructure. The accommodation options range from campsites in beautiful bays to a large number of private rooms and hotels of various standards. Early reservation is recommended in the main season. Depending on your taste, you can choose between an idyllic island location on Cres or Krk or urban nightlife, as guaranteed by the port city of Rijeka and the old seaside resort of Opatija. Very princely there: “Hotel Bristol”, phone 0 03 85/51 70 63 00, www.hotel-bristol.hr, double rooms from 108 euros. Cheaper: “Hotel Opatija”, phone 0 03 85/51 27 13 88, www.hotel-opatija.hr, from 48 euros.

Travel time: The Mediterranean climate brings warm summers (on average 30 degrees) and little rainfall. If you don’t necessarily want to swim, you can enjoy the off-season from March to November. 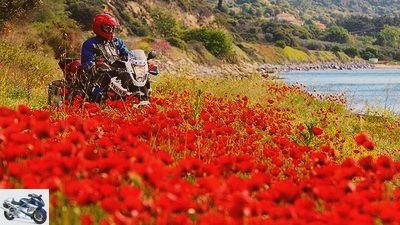 A little paradise: a sea of ​​flowers on the Greek coast.

Motorcycle tour through Croatia
To discover Croatia means above all to see water in all colors. When island hopping over the limestone islands of Cres and Krk, glowing white in the dark blue waves of the Adriatic, the intensity of the impressive play of colors becomes clear. On their coasts, the bathing bays vie for the title of “most beautiful in the whole country”, while on the mainland the smallest streets are waiting to be rediscovered by motorcycle travelers. You spiral up to fabulous views of the beautiful coastline – and lead to many a hidden waterfall, the green water of which plunges into the depths over mossy tracks. The MOTORRAD action team offers four seven-day travel dates, see the dates box below, more information at www.actionteam.de.

Curving fun with a view of the sea
The action team tour Panadria-tica, which leads from Italy along the Adriatic to Greece, is rich in contrasts. Hidden streets lead through the partly green, partly karst landscapes of Slovenia and Croatia and repeatedly reveal magnificent views of the dreamy coastline. We continue south-east through regions of Montenegro, Albania and Macedonia that have almost been forgotten by progress. Soon you will reach the north of Greece, rich in evidence from several millennia of cultural history. And in the evening, motorcyclists can look forward to picturesque coastal towns, mild sea air and a refreshing dip in the waves of the Adriatic.