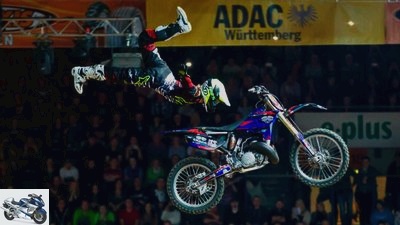 Four internationally renowned freestylers and one newcomer followed the ADAC’s call this year. Frenchman Nicolas Texier is at the event for the first time after being forced to cancel several times. The show can be a stepping stone for him to take off internationally. Although he should master the highest levels of difficulty, the fame of his person is currently limited to his homeland, France.

The Dane Alex Porsing has already developed into a real crowd-pleaser. He traveled to Australia specifically for training in order to prepare intensively for Stuttgart. From the point of view of the organizer Dennis Garhammer, Porsing knows how to bend like no other and show extreme extensions.

A true artist in the air is the 25 year old Italian Davide Rossi. Among other things, he has mastered the tsunami backflip, in which a handstand is performed on the handlebars during the backflip. The second Frenchman in the field is probably the most experienced freestyler in Europe, Romain Izzo, who, while others jumped higher and higher, ran at walking pace to a 50 cm high jump edge and showed a backflip just a few centimeters from the ground. A German is also part of the game: Christian Kleiner is competing for the second time in a row and is regarded as the German hope for young talent in the freestyle sector.