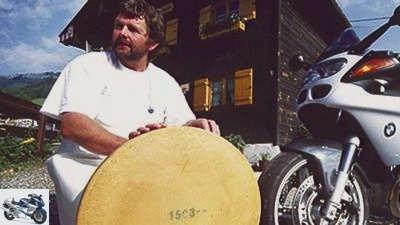 Cows, cheese and curves are the constant companions between the Lechtal and Allgau. Whether as a round trip or as a threading track to the south? the route is one of the best that the German-Austrian Alpine region has to offer.

?? Danger from a free-roaming cow on the A 96 between Landsberg and Buchloe. ?? 10.15 am, the traffic announcement from Bavaria 3 comes in from the off. I have another coffee at the Lechwiesen service station, then start the BMW R 1100 S again and drive almost two kilometers further off the autobahn at Landsberg West. On the way I almost look my eyes out of my head, but cows only appear in the shop windows of the Landsberg souvenir shops, in the variants plush or wood.

The BMW and I disappear in the alley labyrinth of the upper and lower town, bumpy on cobblestones past medieval towers and gates as well as house facades from Gothic, Classicism and Rococo. And here it is already raging, right behind the main square, the Lech ?? the companion of my planned trip. First ?? and even translated into Japanese ?? Signpost to the Romantic Road, which threads its way south into the Alps and which I am now following. But it is still quite pragmatic as the B 17. Broad, straightforward and curvilinear, it rolls from Landsberg to Schongau. From the Lech, according to the map right next to it, nothing can be seen anymore. Boring! I prefer to feel my way south via neighboring small streets. And it immediately becomes really romantic. Here a village, there a pilgrimage church, there a cow dung on the asphalt. 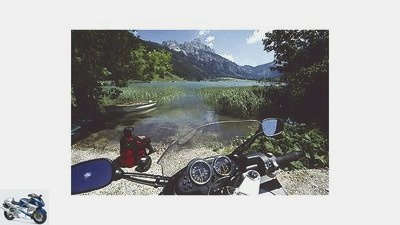 Calm after the storm on the banks of the Lech.

At Reichling, finally, the first view of the snow-capped Alps. Again and again the road crosses the winding course of the Lech, which, however, eludes closer inspection due to the thick undergrowth. Kinsau, Apfeldorf, Hofen. The gentle curves through the foothills of the Alps, which are characterized by moraine hills, are the ideal warmers for the Alpine passes further south. Suddenly you know what it was good for that the Ice Age glaciers once plowed this landscape apart, graveled it and, in principle, completely remodeled it.

At the end of the cul-de-sac to the almost 1000-meter-high Peibenberg summit, the time has come: the Limestone Alps, so far only seen in sections, show themselves in all their glory. I pull the thermos flask and pretzels out of the tank bag and look at the jagged line on the horizon while dining with relish. To see everything, from the Karwendel in the east to the Allgau Alps in the west. In between there are a dozen or so lakes. My finger slowly wanders over the map. In the north, the Lech is sometimes drawn as thick as a thumb, in the south it is just more than a wafer-thin thread that begins somewhere behind the Allgau Alps.

Curvy stretches without end? Just looking at the map could make you dizzy. This part of Germany and Austria is an ideal introduction to the weird world of the Alps.

getting there
The quickest way to get there is via the A 8 to Augsburg. From there it goes on the B 17 (»Romantic Road«) to Landsberg. If you want to start the tour in the Allgau, take the A 7 from Ulm to Kempten and the A 980 and B 19 to Immenstadt. Since there are many other wonderfully beautiful routes in this region, the route described can of course be extended as desired. Attention: The toll road from Zug to the Lechquellen Mountains is closed to private traffic from 8 a.m. to 4.30 p.m. During this time, only hiking groups and buses are on the way there.

Stay
There is really no shortage of hotels and pensions in this region. The following accommodations are particularly recommended: »Gasthof-Hotel Zur Tanne«, Family Dressel, Immenstadt-Thanners, phone 08379/829; www.hotelzurtanne.de. For an overnight stay including breakfast you pay from 25 euros per person. Holiday apartments (for two to four people) are also available for longer stays, prices range between 30 and 50 euros per night. The landlord drives his motorcycle and gives tour tips. In Warth am Arlberg, Austria, you can sleep very well in the »Hotel Walserberg«, phone 0043/5583/3502; www.walserberg.at. An overnight stay with breakfast is charged from 30 euros per person. Here, too, the landlord provides his guests with tour tips.

Worth seeing
Two-wheeler and technology fans should definitely take a look at the light motorcycles of the Imme brand up close ?? namely in the Museum Hofmuhle, An der Ach 14 in Immenstadt (Wednesday to Sunday, 2 p.m. to 5 p.m.). Further information about this vehicle is available on the website of the club »Der Imme Schwarm e. V. «at www.imme-schwarm.de. The club, founded in 1997, holds an Immetag every year in Immenstadt, where you can marvel at the historic motorcycles in action. Information on phone 08323/95080. In the old Emmental dairy in Freibrechts there is a private collection of historic motorcycles that is well worth seeing. If you ask politely, you are welcome to take a look. Winfried Mischler, phone 08379/631. The “compulsory program” includes ?? logo ?? a visit to some castles and churches along the Romantic Road between Landsberg and Fussen. A detailed list of the sights (Neuschwanstein, Hohenschwangau, Wieskirche et cetera) is available from the Allgau / Bavarian Swabian Tourist Office, phone 0821/4504010; www.allgaeu.de. On weekends and during the holiday weeks, however, there is a lot of rush.

Information about Immenstadt can be obtained from Guest Information Immenstadt, Marienplatz 3, 87509 Immenstadt, phone 08323/914176; www.immenstadt.de. You can find out interesting facts about the respective regions from Tirol-Werbung in Innsbruck, phone 0043/512 / 5320-350; www.tirol.at, as well as from Vorarlberg Tourism in Bregenz, phone 0043/5574/425250; www.vorarlberg-tourism.at.

literature
The HB picture atlas of the same name (No. 93) provides a good overview on the subject of »Allgau« for 8.50 euros. The volume “Allgau” from Michael Muller Verlag offers compact information for the tank bag for 15.90 euros. The HB picture atlases “Upper Bavaria between Lech and Inn” (No. 196), “Vorarlberg” (No. 47) and “Tirol” (No. 174) each cost EUR 8.50. Further tour tips, which lead through the neighboring regions, can be found in the on-the-way volumes by the team of authors, »Austria« and »German Alps«, from Motorbuch Verlag for 16 euros each. Mayrs offers the most detailed maps with the general map sheet “Austria 3”, which shows the Lech from the source to Schongau and thus almost the entire route, as well as the German general map sheet “Bayern Sud” for the last northern tip to Landsberg. The entire tour can be seen on the Falk state map “Bavaria” (No. 12), but on a less detailed scale of 1: 300,000. 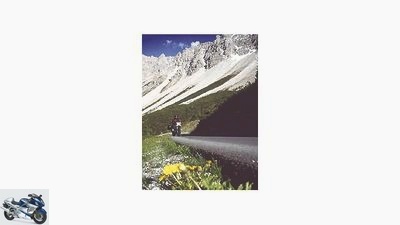 Happy who finds such roads.

Impatiently, I direct the BMW along the Romantic Road across the Pfaffenwinkel. The route, which at times coincides with the German Alpine Road, is now much more curvy, and the landscape is extremely picturesque. I’m excited to see how the Lech has developed in the meantime.
Behind Steingaden I cross the bridge to Lechbruck.

The view of my companion is okay, but the ultimate view of the Lech only comes from the almost Caribbean-green Forggensee ?? certainly one of the high points in the course of the river, which temporarily stores the glacier water it has brought with it from the Alps. In the distance you can see jagged mountain peaks and underneath the dream castle of Bavaria’s model king Ludwig II: Neuschwanstein. However, the detour turns into a nightmare. As in the sales, hundreds of tourists rummage through the souvenir shops for King Ludwig bath towels and Neuschwanstein T-shirts. Even before the actual tour of the castle, I flee from Germany’s top tourist attraction and continue to the neighboring Fussen. A distinctive medieval town in the lee of the castle, everywhere perfectly restored town houses, cozy street cafes and facades with luftlmalerei. And the Lech in the middle, but calmed down and wedged into an unworthy canal corset. 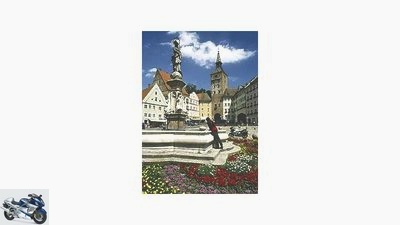 But two corners further, it plunges down into a narrow gorge as a waterfall, in which it disappears for a short time. One last rebellion before it is increasingly domesticated in canals and barrages on its north course to the Danube. The south course towards the source mountains seems more promising. Soon it goes over the Austrian border to Tyrol. And behind Reutte, only a good ten kilometers further, the Lech is barely recognizable. It flows in exuberant loops through its wide gravel bed, graveling up small dams, evidently shifting its course according to desire and water level. The landscape has also changed. All around the mountains are now higher and more jagged, the first real pass appears. As if it could be the last one, I hurry up the mountain with the sports tourer from serpentine to serpentine. At almost 1000 meters, the Gaichtpass does not break a record in altitude, but rock faces, gorges and the opposite peaks of the Lechtal Alps are suddenly within reach. From the top of the pass I take a quick look back into the Lechtal, then I speed towards the mountains in the Tannheimer Tal. The brook can wait, a round through the Tyrolean-Allgau border area is a must.