Ten years after successfully entering the world of heavy-duty vehicles with the RSV 1000, Aprilia renews the offensive with a sharper-than-ever RSV4. 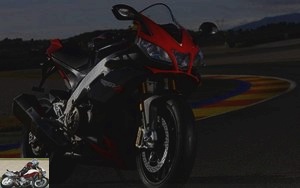 It starts off like a VFR. Almost hollow in R mode for "road / road", the handlebar selection of "ride by wire" allows you to familiarize yourself with the all new Aprilia V4. 11 years after the RSV 100 and its twin Rotax open at 60 °, the new diva has bet on a house V4 open at 65 ° which is reassuring from the outset. Smooth engine, it is on velvet that one evolves, perched on a short machine like a 600 cm3, and that one learns the curves of the Alès circuit while breaking in the tires. We familiarize ourselves with the ergonomics of the notches of the tank, quiet. 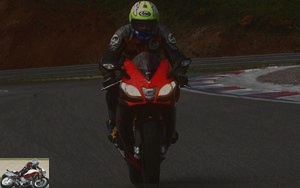 Smoothly from 4,000 rpm, this V4 is Aprilia’s latest ultra compact gem. Noale’s firm has spent lavishly on developing this entire machine. It has gone, we are told, with a blank sheet of paper. "This is a project dear to Aprilia", assures Alain Roger, communications manager for France. And that is to say the least. The three-year envelope is 25 million euros thick. We will have to sell a few machines and / or win the title to amortize such an investment.. 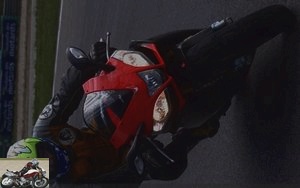 From May, this jewel dedicated to winning, ultimately, in Superbike, will be available to customers in its Factory livery (customer competition), offered at € 19,990. From September, an R version will lower the bill by around 5,000 €. Difficult to wait for some. Ten machines out of the hundred promised to France have already been reserved in February on the Internet. "We’re going to have to deal with the shortage," says Alain Roger at the same time as he smiles. And to think that it is the crisis. 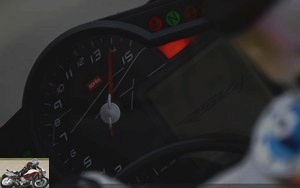 Force-feeding on all floors

At its handlebars, in any case, we quickly forget this financial crisis. Like the price of fuel, the instantaneous consumption of which is known on the dashboard. Thanks to its ride by wire device, you can now navigate, in neutral and with the engine running, from one mode to another. This electronic device that connects the accelerator cable to an electronic box actually manages the power curve of the motorcycle according to the gear engaged, the engine speed and the incline of the machine. Real race assistance. There are three modes. R for road which limits the machine’s cavalry to 140 hp, S for sport with already 180 hp, and T for Track with the same horses made wild by force-feeding on all stages of the combustion chambers. Very quickly, the 180 hp announced on paper for 189 kg dry call to be released. 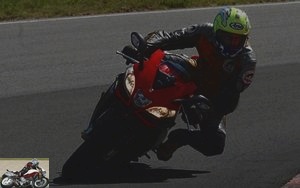 The S mode is imposed, humbly, in view of the performances that one almost apprehends. Immediately, the torque of 115 Nm at 10,000 rpm, jumps in the face of the driver as a warning. Slightly smoothed out on the first gear in S, the presence of the engine is overwhelming in T mode. It is on this selection that the machine is the most explosive, even if one cannot say so brutal the throttle grip is progressive and flexible. 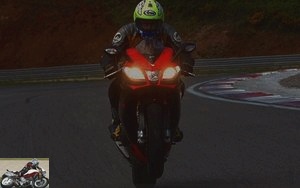 The tires are now hot. Ideal for revealing the excellence of the cycle part of which Emmanuel Obiegly, technical referent of the RSV4 for France, assured us "that it comes straight from the achievements of the GP". 10.1 kg for the frame and 5.1 kg for the swingarm. The weight of two bicycle frames. Sharp, the chassis does not suffer any criticism. Balanced in Ohlins, it owes in part its agility to an engine placed high enough to allow easier changes of angles, and at the same time to an engine whose center of gravity has been tried to lower, in particular by opening the V at 65 °, "to lower the injector bodies there," explained Mr. Obiegly. What he didn’t say was that the engine, while this machine’s biggest asset, is also the biggest concern for the rider. Now it remains, if not to tame it, to try to live with a few laps of the track. That’s the paradox of this machine with incredible potential, which few riders can claim to have seen the limits of. A certitude. 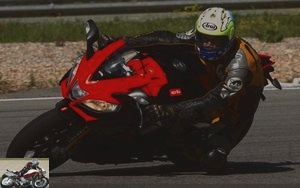 In dynamics, we find ourselves behind the handlebars of a racing motorcycle which a factory rider has given us the keys to. Rare moment. Over the curves and other tight turns, on the restart, this racing machine rears up under acceleration, as on TV. In one of course, but also in two, it relieves the slightest favorable relief. Caution. Concentrated, eyes widened by a first session, it is time to revise the precepts inculcated in the driving courses. And do not forget that the pilot is the parasite necessary to take a motorcycle. So, we break down so as not to get carried away. And do not upset the bike, whether when approaching a turn or when re-accelerating. Obviously intimidated. Beware of fatigue, the slightest laziness pays off in cash. Arms a little too hooked to the handlebars because the legs are tired of repositioning the rider and the machine will tend to start steering under acceleration. 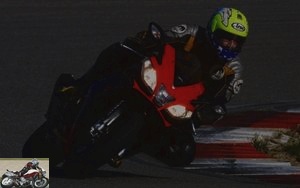 To get around all these effects, there is only one remedy: become a pilot and enroll in a fitness room or run a report above. The V4 allows it, and sets off again without complaining above 4,000 rpm, very vigorously at the approach of 7,000 rpm to enrage even more at 10,000 rpm. Quick, the ignition failure. Another 4,000 rpm indicates the breaker. Little by little, we still get used to the exceptional cavalry, his hand of course. So we adapt to this exuberance. Rather than bothering to want to ride the laps, we play with the terrain of the track to shift into gear before a break. It’s less spectacular than making the V4 howl, but you keep your wheels on the ground and your trajectory in line. It is actually more efficient and the start of driving. At the end of the straight line, as we were trying to downshift to enter a corner, very quickly we see that the machine can shift much harder. So we just brake and jump into the curve with less engine braking. The radial calipers on the narrow tracks of the 320 mm discs are anyway largely dimensioned to contain the vitality of the machine, like the tires, of the Pirelli Diablo Supercorsa SC (sport competition) for our test, these are the SPs which will equip the beautiful series. 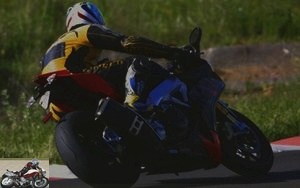 Exhausted at the end of the test, the rider relished the luck he had to get on such a machine. And hasten to call his physiotherapist. On the other hand, it is difficult to know what such a machine, apart from road mode, could give on the roads. Surely a lot of cold sweat considering the liveliness of the chassis, the vitality of the engine, in short, the performance and the attention needed to bring such a crew. Certainly, the RSV4 is a racing machine that it will be risky in the 180 hp version to want to operate on asphalt. The question obviously does not arise on the roads of France where the new Aprilia diva will be castrated at 106 hp. His life is elsewhere, without indicators or mirrors. With a good pair of sliders.

Availability mid-April for the Factory, September for the R.