The RSV series appeared in 1999. Aprilia, a Piaggio group, took care of the cycle part, but the engine was then designed and manufactured by the Austrian Rotax. These are the first successes of the 60 ° V-twin. The power is then 128 horsepower at 9,250 rpm and the torque of 10.3 mkg at 8,000 rpm. There is already a pneumatic downshift assistance system, limiting rear wheel lockouts.
The sports car changed regularly thereafter, both in terms of mechanics and aesthetics, and was then available in R and RSV4 Factory versions. These names distinguish the "basic" versions, already superbly equipped, from the homologated road racing series, which are even better equipped..

In 2009, to fight on equal terms with the four cylinders, Aprilia launched the RSV4 Factory. An ever more efficient variation of its sports car, it is powered by a new and explosive 4-cylinder block in V open at 65 °, developing 180 horsepower at 12,500 rpm and 115 Nm of torque at 10,000 rpm. A less expensive model, the R version, is also available. 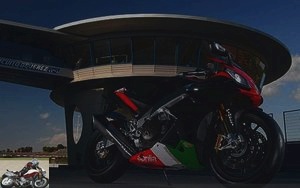 For 2011, the firm of Noale presents on the circuit of Jerez, in Spain, the new version of its very high-end hypersport now RSV4 APRC. A framework at the height of the success of this opus in the V4 and its results in Super Bike this year, driven by Max Biaggi: World champion … no less. 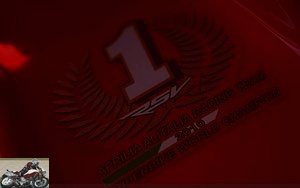 This event is also proudly noted on the tank and the rear shell of this RSV4 Factory APRC (Aprilia Performance Ride Control). Still as racy, the design hardly changes, except for slightly retouched graphic effects and the appearance of the three Italian colors on the fairing shoe.. 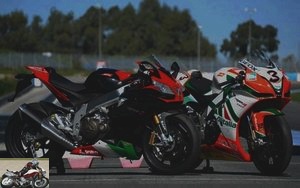 There is an LCD counter block with an orange background, next to a large tachometer. In circuit mode, ergonomics give pride of place to the chrono and gear engaged, then are indicated, engine map chosen, traction control level, engine temperature and, at the bottom left, the tachometer.

However, if you want to move on public asphalt, the RSV4 APRC offers a display of its LCD window more road: around the large central tachometer indicator, are arranged the engine temperature information, gear engaged and clock at the top, type of cartography and traction control level on the left and odometer at the bottom. 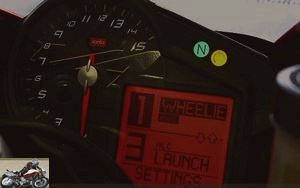 This race finish is also distinguished from the R version by the profusion of carbon parts (mudguards, side trim), by the forged aluminum wheels and the cycle part equipment signed Ohlins: fork, rear suspension and steering damper. There is also a less angular, longer and lighter 2 kilogram exhaust silencer. The whole is really top-notch. 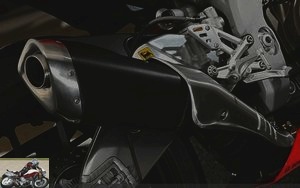 But, just as much as mechanically, it is also at the level of electronics that the 2011 model takes off. Indeed, in order to counter the competition, Aprilia draws the racing electronics. 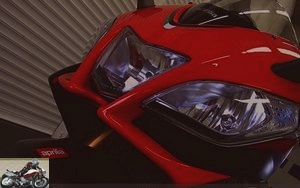 Very compact, the size of this hyper sport makes believe in a 600 cc. However, my eighty-four meter fits easily on the monster’s backbone. It’s hard to believe that you are sitting on a machine of 180 horsepower for so many kilograms dry. However, on start-up, the exhaust mimics the powerful, violent melody of a GP motorcycle quite well.. 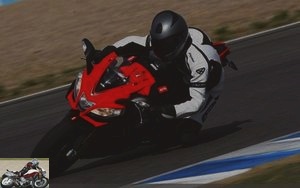 Yet it’s calmly that I set off on the Jerez track. First of all by the euphoria of piloting a pure replica and then above all by the presence of high-performance electronic assistance. These are designed by Aprilia and produced by Magneti Marelli. The Ride by Wire injection mapping, much smoother than on the previous model, offers 3 modes: T (track), S (sport) and R (rain): track, sport and rain, actuated by successive pressure on the starter once the motorcycle is running. In this last mode, "only" 140 horsepower are then available..

The controls are soft and precise, their ergonomics conform to sporting standards. 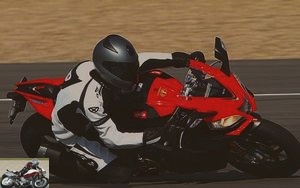 The new on-board APRC system includes a set of fully configurable assistance, crossed or not.
To sum up, we distinguish between ATC (traction control or anti-skid control, AWC (anti-wheeling), ALC (starting assistance) and AQS (upshift without clutch). 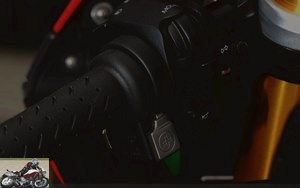 The most impressive is undoubtedly the ATC, configurable on eight levels, from the most controlled (8) to the least effective (1) or even completely deactivated, for the best. The system is even capable of self-adjusting to different tire mounts! On the left handle are two mini-paddles, + and -, which can be actuated at any time, allowing the desired level of traction to be adjusted: the lower the level, the greater the available torque and therefore the sensitive sliding . The on-board computer takes into account the speed of each wheel via front and rear ABS type sensors, but also the inclination of the motorcycle (dynamic position)…! 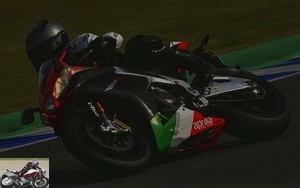 Up to setting 6, you can clearly feel the limit in dynamics. Ideal for the start of the race, in cold weather or days without …). Transparent, the system transcends piloting. In position 5 then 4, the rear axle drifts are more sensitive but in total control … electronic. And it was then that the right grip tightened further, in defiance, in disbelief as well. And each time the "magic" operates, allowing everyone, according to their level, to push their limits. We can thus concentrate on driving and take advantage of the demonic engine availability, from 4 to 13,000 revs, only called to order by the shift light. All the more pleasant on this circuit of Jerez, with long curves taken on an angle, as the first 3 gears have been brought closer to favor speed at the exit of the curve. Enjoyable and addictive !

In position 3 and below, it will of course be necessary to justify an increasing technical background or a more pronounced ease. But whatever the driving, ATC intervention is clearly better than that of the Ducati and BMW S 1000 RR due to its remarkable progressiveness..

Likewise, we can only praise the efficiency of AQS, an onomatopoeia synonymous with upshifting on the fly, under full acceleration. It’s still time to save, all in a chiseled operation. The system appears better than its German or Bolognese counterpart. When downshifting, you will have to use the left lever and then note that the anti-rebound of the clutch allows the gears to be brought up close to the pins without the slightest locking of the rear wheel. Precise and efficient. 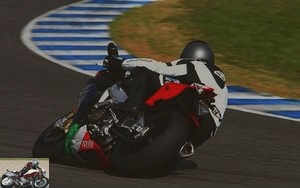 This ease of welding the accelerator therefore calls for another control: anti-wheeling (ALC). Pressing the "mode" selector allows you to configure its action on three decreasing levels until deactivation. The engine architecture and performance of the RSV4 Factory APRC are conducive to unwanted load shedding. Desirable figures for some, others will prefer to stick to the ground to scavenge the hundredths of a second. At 3 ° and more assisted modes, nothing moves. In position 2, the front wheel leaves the ground briefly to rest, thanks to the computer, always gently without your driving having changed. Control and serenity.

By dint of taking themselves for a pilot, the most passionate will want to make gun starts. Wouldn’t it be nice to imitate Biaggi? Chick? Because that is also possible. Return to the dashboard screen and selection of the ALC, or assistance at the start, again, adjustable on 3 decreasing levels. Tested on the first two, this is the setting that I was least excited about, by far. With the engine revving at 9,000 rpm, you gradually let go of the clutch and … the RSV4 takes off sluggishly. A shame! Obviously, Max is much more talented and his electronics on this point surely finer. This mode probably requires a little experience as well. Not enough to hold it against Noale’s hyper sport. There had to be a "defect", a lower quality. So it will be this one. 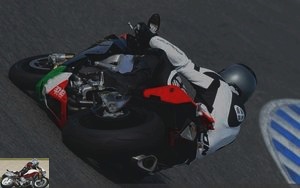 Since you also have to slow down sometimes, and even really hard, the four-piston Brembo radial braking is just as powerful as it is controllable. The 43mm Ohlins inverted fork can handle the strongest decelerations at will, just like the shock absorber handles the most violent climbs. The V4 missile then follows precisely the desired trajectory, plunges into curves and also allows corrections to imperfect piloting. Docile, easy ! 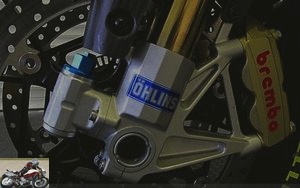 The 2011 RSV4 is also extremely lively, although it is fitted with a new Pirelli Super Corsa (SP) tire fitting whose rear flange displays the respectable dimensions of 200/55 … Specifically developed for the Factory APRC version, the front tire is monogum, the rear two-component. Their pronounced ribbed shape is due to an increase in diameter of 8 mm for the rear and 2 mm for the front without changing their section. The grip is flawless and durable. 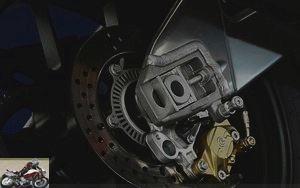 This competition version, Factory, also receives the possibilities of advanced frame adjustments: column angle, height of the engine in the frame, height of the swinging arm. Everything is planned for the demanding competitor.

This frame is made up of 8 elements, 6 of which are made of cast aluminum for a more rigid and lighter assembly. The motor is fixed on 5 points and its lubrication has been improved. 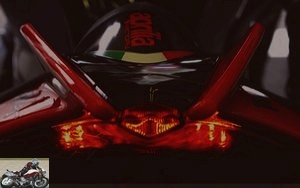 You don’t become world champion by chance. It is a set of extreme qualities that dictate the racing success of this machine, at world level. Aprilia offers for sale a synthesis of the best of current mechanics, cycle parts and electronics. Because the astonishing efficiency of the RSV4 Factory APRC 2011 lies in the obvious symbiosis between these three parameters. It is this permanent alchemy that allows everyone to fly beyond their real level and this in effective safety that is rarely achieved. Evolving through its multiple settings, the "electronic" Factory seems to be a real tool for progress. Moreover, there is no loss on these press days, proof of the level of quality of the technologies and on-board mechanics.

Here it is now available to "common pilots", wealthy or passionate. Because admittedly, its price of € 21,990 puts it out of reach of many of us. More affordable, the R version still requires € 15,000 but does not really offer the same advantages. Despite everything, the Factory model already represents a third of RSV4 sales …! At the time of choosing the ideal ultra sporty, the diva of Noale is likely to once again take the first place. And given its ease of being taken, the title will seem within the reach of many…. at each lap.
And this is the most important.