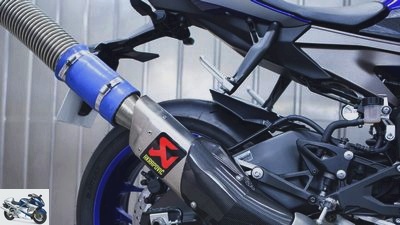 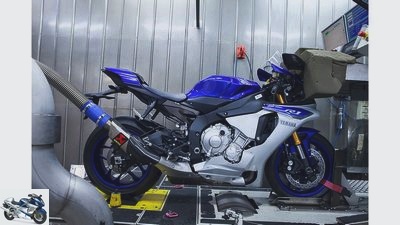 1/6
Akrapovic has its own exhaust gas laboratory and its own titanium foundry for the direct implementation of new concepts. 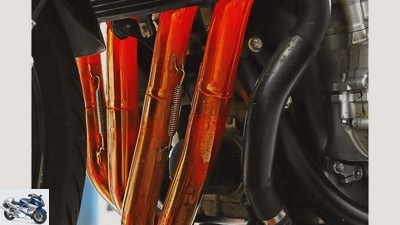 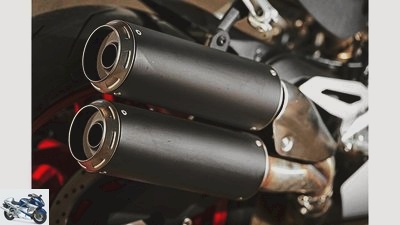 3/6
As a newly homologated motorcycle, the Ducati 959 Panigale falls under the Euro 4 standard. In order to be able to comply with the noise and exhaust gas values, the characteristic “bull’s egg exhaust” had to give way to a more conventional side construction. 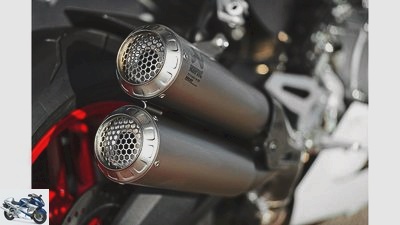 4/6
Good to see: The db killers may no longer be removable from the accessories (here the Akrapovic for the 959 Panigale) and are firmly welded in. Instead of a circled “9” for the noise and a circled “5” for the exhaust gas, Euro 4 accessory pots have a printed “G”, an “H” (noise and exhaust gas) and an “S” for the catalytic converter. 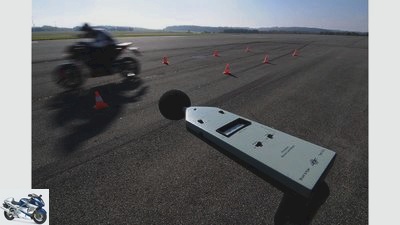 5/6
Euro 4 defines, among other things, stricter limits for noise values, which are checked using a more complex measurement process. However, a Euro 4 motorcycle does not necessarily have a lower level of noise than a Euro 3 motorcycle. 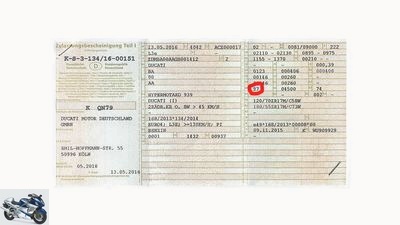 Accessory exhaust systems are among the most popular tuning ever, and the new Euro 4 standard does not change anything. However, due to the more restrictive legal situation, manufacturers face major challenges.

Some industry representatives are not very enthusiastic about the new regulations. Sometimes there seems to be a need, which is evidenced by one or the other jagged phone call. TuV and authorities talk to us more calmly about the supposed bugbear and are less emotional. After all, that much is no different. Because Euro 4 or not, an accessory exhaust must not be louder than the original part, and the performance must be in a window between plus and minus five percent compared to the series. Basta.

Ever since the presentation of the new Ducati 959 Panigale with its voluminous, laterally guided original exhaust, everyone has known that Euro 4 does mean cuts – especially visually. If Ducati had not been legally forced to make a change, they would definitely not have castrated the silencer, imaginatively referred to by fans as “bull eggs”, as it has so far been used in the entire Panigale series. In any case, the standard exhaust of the 959 Panigale sounds quite cautious. Even the Akrapovic bag from the accessories, which roughly imitates the shape of the new standard silencer, sounds suitable for the neighborhood. Because the dB killer is now firmly welded in according to regulations, manipulations are difficult.

Roaring bags have a hard time

The EU regulation 168/2013, better known as Euro 4, is responsible for all of this. Among other things, it defines the exhaust gas limits for newly homologated motorcycles with a displacement of over 150 cm³. Specifically: instead of two grams of carbon monoxide, 1.14 grams may be emitted per kilometer, 0.17 grams instead of 0.33 grams of unburned hydrocarbons and 0.09 grams of nitrogen oxide instead of 0.22 grams.

Furthermore, the guideline prescribes the presence of an OBD connector on new machines (onboard diagnosis) and places a durability requirement of 35,000 kilometers (is simulated on the test bench) on components relevant to exhaust emissions, which also applies to accessory systems. All motorcycles must also be equipped with an activated carbon filter, which returns the gasoline vapors to the combustion when the engine is running. 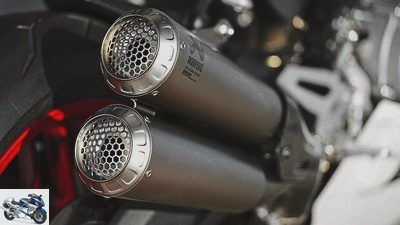 The db killers must no longer be removable from the accessories (here the Akrapovic for the 959 Panigale) and are firmly welded in.

We have already mentioned the firmly welded dB killer for accessory systems based on the Panigale Akras, but now it gets interesting: What remains are the new noise regulations with completely different measurement methods than before. According to the Euro 3 regulations, measurements were taken in second and third gear. Once when driving past at 50 km / h and once at full throttle at the height of the measuring system, whereby 80 dB were not allowed to be exceeded.

Euro 4 works with a more complex measurement method, according to which the maximum permissible volume is 77 dB. The noise level is determined in several gears in a range between 20 and 80 km / h. Weather conditions and asphalt properties are precisely specified for the measurements. Thus, the process leaves even intelligently programmed exhaust systems with flap control little room for a “free interpretation” of the maximum values ​​to be adhered to.

Two extreme examples for original systems emerge as possible consequences. The current MV Agusta Brutale 800 again has a filigree, beautiful flute exhaust, but has significantly less top performance than the previous model. Suzuki’s eagerly awaited new GSX-R 1000 will probably come up with a lot of power, but will carry a huge stovepipe on the side.

The challenge is to bring performance and optics under one roof. Sound is a completely different topic. A manufacturer like Akrapovic has the necessary know-how and the resources to be able to offer Euro 4 accessory systems for the new models practically immediately.

The Slovenes take Euro 4 very seriously. Abroad, the costs would be cheaper and dealing with the legal provisions would be more lax, according to research. It is a quality feature that Akrapovic is currently the only manufacturer in Germany to have certified. In order to be able to comply with the EU regulations, the Slovenes are working on new, complex chamber systems. Roughly speaking, the techniques of reflection and absorption dampers are combined with one another. Getting the systems to work with the now much larger catalytic converters means enormous additional effort in development.

“We have to test and try a lot more in order to achieve a performance plus in the end,” says Jaka Klemenc, Research & Testing manager at Akrapovic. Due to the many restrictive factors, it is of course more difficult to design a distinctive sound. Smaller manufacturers find it even more difficult to deal with the complex development, which explains the certification outside of Germany and is still reflected in the sales price. On January 1, 2020, the game will be repeated again, then Euro 5 will apply.