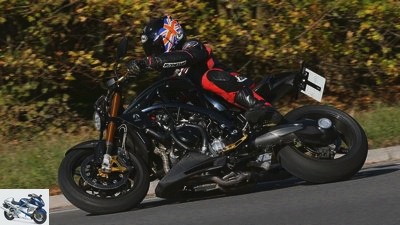 1/12
With this Ariel, of course, it is not the washing power that is convincing, but the overall concept 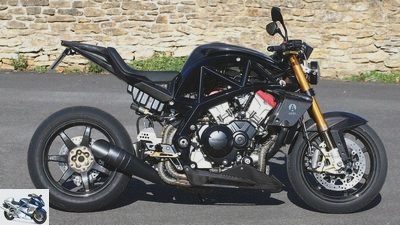 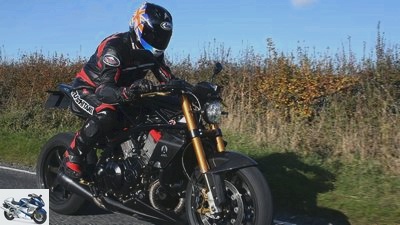 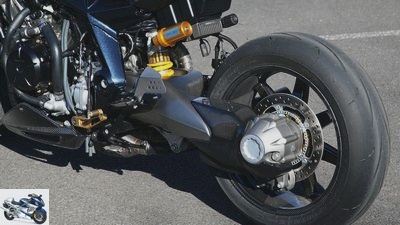 4/12
Almost free-standing rear wheel. The Honda VFR 1200 F can best be recognized by the cardan drive. 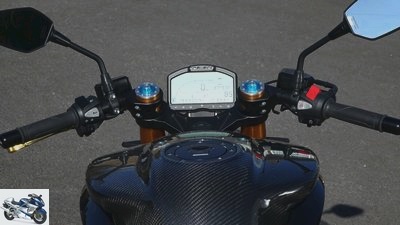 5/12
The two handlebar fittings are original Honda, the accessory cockpit racing and the 15-liter tank made of carbon fiber. 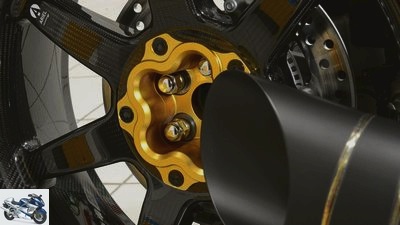 6/12
The BST carbon fiber wheels weigh only half of the original ones. You don’t even want to know the price. 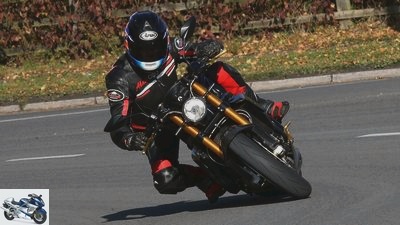 7/12
As pious as the tuned V4 is at low speeds, it blatantly kicks you in the back when you call up full power. 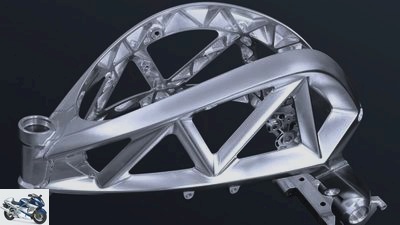 8/12
The aluminum frame is just as beautiful as it is elaborate. 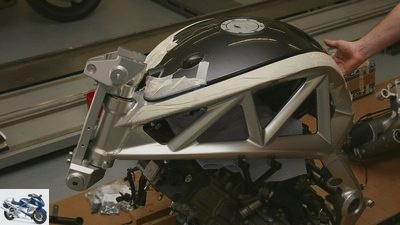 9/12
Its production alone devours around 70 man-hours. 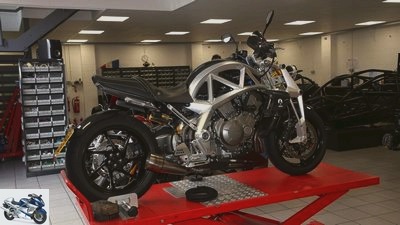 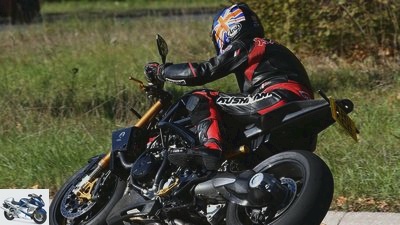 11/12
The chassis and brakes handle the forces of the engine well. 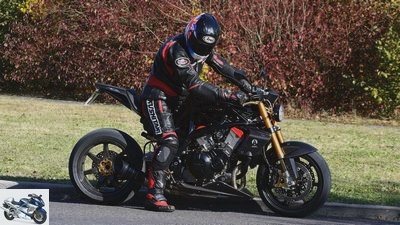 12/12
Despite its tremendous performance, the R is not a real sports bike, but rather a high-performance sports tourer.

With this Ariel, of course, it is not the washing power that is convincing, but the overall concept. Because this black chunk shows what can become of a Honda VFR 1200 F. And the result is cool down to the pores.

As early as 1847 the company was Ariel Founded in Birmingham and initially manufactured tires for carriages and later bicycles. Ariel was also one of the first manufacturers whose bikes had the same wheel size front and rear. From 1900 cars and two years later also motorcycles enriched the product range. In the inaugural race at the very first circuit – Brooklands – Ariel raced a V8 Grand Prix car. In general, Ariel was an innovative company, so company founder James Starling patented the spoked wheel for pneumatic tires and sold the first British motorcycle that was equipped with a multi-stage transmission. 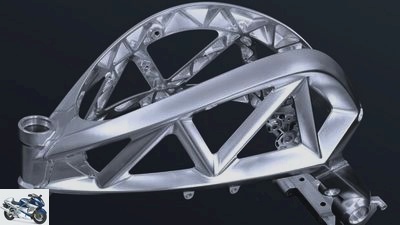 The aluminum frame is just as beautiful as it is elaborate.

In Germany, Ariel is primarily known as a laundry detergent brand. Outside of the two-wheeler scene, only a few people know that motorcycles were also produced under the same name from 1902 to 1967. And here too, Ariel is most likely to be associated with the idiosyncratic four-cylinder concept, the pistons of which were arranged in a square and acted on two crankshafts. This drive called Square-Four was produced in several variants and displacements of 500, 600 and later 1,000 cm³ from 1930 to 1958. From 1959 only simple two-stroke engines were built. But you couldn’t compete with the Japanese, and things slowly but surely went downhill. In 1967 the two-wheeler production was stopped. Until 2014.

Simon Saunders (64), owner of the naming rights of Ariel and head of the small series manufacturer of the same name, founded in 2001, saw around 100 buggy-like four-wheelers powered by supercharged Honda engines from the Civic Type R, in 2009 the Honda VFR 1200 and its V4 engine for the first time. This was the ideal basis for realizing the Ariel motorcycle project. Under project manager Tom Siebert (38), the Ace was created in just under three years, a bike that rightly bears the name Ariel. The number one was finished in 2014, and over 100 more copies have been made since then. Most of them, 95 percent to be precise, wear powerful Springer forks. She explains why Ace also called angry ant. And it goes perfectly with the eye-catching and elaborate lattice frame that is welded from countless individual parts. The production of the aluminum strand, which is reminiscent of an exoskeleton, takes around 70 man-hours. Incidentally, every single machine is completely manufactured and assembled by a three-man team, whose names are immortalized on a badge on the bike. Each bike is individually configurable, as the homepage www.arielmotor.co.uk shows. No two ace have been identical to date, and it is unlikely to ever come to that. If the normal Ace does not seem sufficiently exclusive or not powerful enough with the 173 horses of the standard engine, you can or could be helped. Production of the Ace R shown here started in 2018 because the entire production of ten copies has already been sold at a net price of 50,000 British pounds or more. Alan Cathcart had the opportunity to drive number six the day before it left for its owner overseas. 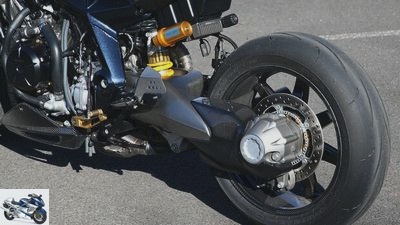 Almost free-standing rear wheel. The Honda VFR 1200 F can best be recognized by the cardan drive.

The R differs significantly from the “normal” Ace. The steering head angle, which is steeper overall, can be individually adjusted again using eccentric inserts. In addition, with the R, the finest, of course fully adjustable goods from Ohlins ensure the best road contact and feedback. The Dunlop Sportmax rubbers, in the 190 dimension at the back, are stretched on fine carbon fiber wheels from BST. The weight saving compared to standard aluminum rims is around 50 percent. With correspondingly positive consequences for handling and steering behavior. The combination brake system with Nissin six-piston calipers including ABS is standard, with the exception of steel-flex cables from Goodridge, but both ABS and traction control can be switched off. In addition to the wheels, the self-supporting rear frame and the few body parts including the tank are made of carbon fiber. This makes the R, weighing 219 kilograms dry, a whopping 20 pounds lighter than the standard Ace. The standard seat height is 825 millimeters, but there are options 745 or 784 millimeters. The footrests are also available in three different heights and positions.

Extensive work on the V4

The work on the V4, which now develops 203 hp at 10,000 rpm and 143 Nm at 8,750 rpm, was significantly more complex than on the chassis. That is 30 HP and 14 Nm more than the standard engine. This was made possible, among other things, by the bore that was enlarged by one millimeter to 82. The inlet and outlet valves also grew by this amount. They are operated by sharper camshafts, the crankshaft lightened by 500 grams. The new pistons run on lightened steel connecting rods in Nikasil-coated cylinders. In addition, the shape of the combustion chamber was redesigned using a milling cutter and the compression was also increased from 12.0: 1 to 12.8: 1. The injection with the 44 throttle valve remained unchanged except for the installation of a power commander. The exhaust gases are disposed of by a self-made stainless steel exhaust without a catalytic converter – and without soundproofing. It was clear from the start that the R would not be a politically correct bike, and it sounds like a very angry ant. The stated time of 2.7 seconds for the sprint from zero to 60 mph, corresponding to 96 km / h, seems quite feasible, while the stated Vmax of 185 mph, corresponding to 300 km / h, is more the wish of the father of the thought was. 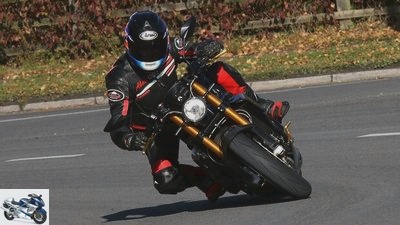 As pious as the tuned V4 is at low speeds, it blatantly kicks you in the back when you call up full power.

But at the latest when you swing your leg over the seat, these values ​​are completely irrelevant. Thanks to the higher bench and the stub strapped to the upside-down fork, the seat geometry is significantly more active than the one on the standard Ace previously ridden. You sit more in the bike than on the bike and you are comfortable enough to spend a long time in the saddle. Because the two rear cylinders are offset inwards, the waist of the Ace is very slim and allows smaller riders to stand securely. It’s just a shame that the pretty footpegs are so smooth that the boots slip off easily. Despite its tremendous performance, the R is not a real sports bike, but rather a high-performance sports tourer.

A kick in the cross

Basically, this Ariel shows very nicely what could have become of the very well thought-out V4, if one had only dared. Somehow it seems like the Japanese forgot about him in the undervalued Crosstourer. Because as pious as the tuned V4 is at low speeds, it blatantly kicks you in the back when you call up full power. Thankfully, the HM-Quickshifter saves you having to pull the clutch, and the long wheelbase of 1,541 millimeters eliminates the risk of unwanted wheelies. The spectacle is accompanied by the hellish sound of the undamped exhaust system. The chassis and brakes handle the forces of the engine well.

Not exactly super handy, but the R can be controlled with agility. As I said, it is not a sports bike, but a sports tourer. It’s a shame that there will only be ten bikes.