Everything about BMW Motorrad 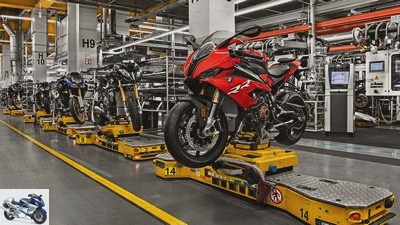 The BMW company spokesman Julian Friedrich, who is responsible for the area, confirmed this on Wednesday afternoon (March 18, 2020) when asked by MOTORRAD.

The reason is to protect employees on the production lines from an increased risk of infection by the corona virus. But there are probably also bottlenecks in the parts supply, which could bring production to a standstill anyway. Another consideration should be that the demand for new BMW motorcycles will be correspondingly low in the immediate period during and shortly after the current crisis.

The car belts are also at a standstill

On Wednesday morning it became known that BMW will initially stop car production in its plants in Europe and South Africa until at least April 19. BMW spokesman Julian Friedrich said that motorcycle production should also be suspended for this time. BMW motorcycle production in Berlin will end on Friday, March 20, with the late shift. When asked about the further employment and wage situation of BMW employees, Friedrich said: “We are currently checking the operational and individual requirements for short-time work and then decide which instrument – home office, time and vacation account or short-time work – is to be used.”

BMW has been building motorcycles at the Berlin-Spandau plant since 1969. Around three million machines have been built there to date. Berlin is the only BMW motorcycle location in Germany. In Thailand and Brazil, the Bavarian group still operates plants that assemble motorcycles from Germany for the local markets.