Bad ! The S 1000 R is nothing less. When BMW comes to join in the brawl of the hyperfighters, it does so with the same will as when it entered the hypersports segment: knock out everyone, right away, and give a slap when the others want to get up.. The target: the Tuono V4R, Brutale 1090 RR and the orbit of the SuperDuke 1190 R. Like the most violent roadsters on the market, the S 1000 R is a close relative of a sports car. In this case, it is the brother of the S 1000 RR.

Same family, same face? Almost, enough anyway to instantly recognize the affiliation between the German streetfighter and superbike. With its fork head unit filled with asymmetrical headlights, its side panels with a different design depending on the side, its thorny rear and its large technical part, the S 1000 R defends the singularity of the Bavarian clan and immediately affirms its identity. A pencil stroke allows you to redraw the plastoc covers of the air box and the tank. Look at it, and you go from the circuit to a road full of the scent of burnt tires and pig’s angles. Climb on it, there are no more bracelets, and the handlebars which are reaching out to you announces high tension fighting.

So yes, for the surname, we did not sprain at BM. We remove an R and basta. Let’s not swear … As long as we keep most of the qualities and performance of the S 1000 RR, the adrenaline will not stop in front of a name. It will first be distributed by the large 4-cylinder 999 cm3. Significantly retouched, with shortened impulses of 2000 rpm, the block still sends plenty of sauce, or 160 horsepower. Huge cavalry for road use, requiring quite a bit of composure to operate it. But has the BMW hot water tank left only a few canassons when going from the sporty RR to the roadster R? ?
The deal went like this: the S 1000 R’s engine agreed to lose 33 horsepower in exchange for a stronger torque curve. A little bit of mechanical scalpel (profile of the cams revised and pipes in the cylinder head redesigned), a new engine management BMS-X, and here is this mill which breaks at 12,000 revs while its torque curve gains 1 mkg up to 7,500 very. A minimum of lost extension against more punch at low and mid-range for cannon revivals, it’s worth it. Still on the subject of torque, its maximum value is unchanged, 11.4 mkg, but reached 500 rpm earlier, at 9250 rpm.

Firepower for a high pressure roadster, it just asks you to twist a chassis. But here, it does not fear anything. So to speak, between the S 1000 RR and the R, only the trim changes. From the end of the fork to the last link in the chain, the chassis is designed to collect a very large nag and be violated by the worst brutes of the circuit. The S 1000 R therefore retains the perimeter aluminum frame accusing only 12 kilos, the inverted fork of 46 mm, the mono-shock absorber, the swinging arm worthy of the SBK and the braking maousse of his brother RR.
Barely heavier than her, Behème has altered its geometry a little to offer traction, stability and precision more in line with the road landscape. Thus, the fork angle is reduced from 0.8 ° to 65.4 °, the caster increases to 68.5 mm and the wheelbase increases by 22 mm. The suspensions have fewer adjustments than the sporty one: rebound and compression at the front, only rebound at the rear.
The pack to slow this hyperfighter is at the top: 320 mm discs, Brembo 4-piston radial calipers, and the partially integral RACE-ABS fitted as standard. The brake lever on the handlebars acts on the front and rear brakes, while the foot pedal acts only on the rear brake. By simply pressing a button, the rider can call up three different laws for Race-ABS, linked with the different riding modes, to conform his bike to different conditions of use. These laws are individually combined with the different piloting modes.

Which are two in number, acting in concert with the ASC traction control. The “Road” delivers all the power and the RACE-ABS / ASC duo are calibrated for dry roads. The “Rain” calms the stud at 136 horsepower, with a hint of less torque (10.4 mkg). Acceleration is smoother while electronic crutches react sooner.
By checking the options box, the S 1000 R opens up even more dynamic horizons. For example, that of “Pro piloting modes”. Two modes are added and ASC is replaced with DTC dynamic traction control. Engage “Dynamic” for direct engine response to the right grip, later responsive ABS and DCT, and rear wheel lift-off sensor shutdown. Want a lot of fun, muscular driving and controlled thrill? Crack the “Dynamic Pro” by plugging in the encoder plug. Compared to “Dynamic”, the ABS is not activated when using the rear brake, allowing entry into a curve while skidding. The DTC is pushed into sport mode and the front wheel detachment detector allows wheelies.
Still in the options catalog? Take a look (and prepare a big purple bill) at the DDC amortization. This dynamic damping control, introduced on the HP4, automatically adjusts rebound and compression according to a host of parameters. Supple in “Road” and “Rain”, it becomes firmer in “Dynamic” then sporty in “Dynamic Pro”. In addition, it adapts in real time the settings according to the profile of the road and the movements of the motorcycle (acceleration, braking, angle).

One of the big advantages of a streetfighter is to offer a lot of the fiery spirit of a sportswoman without ending up broken at the end of the day. The installation of a handlebar is there for a lot in the adoption of a new ergonomics. BMW wanted it less restrictive but still sporty. The saddle is lowered to 814mm (6mm lower than the S 1000 RR), the footrests drop 23mm while moving forward 14mm. Thus, the pilot is in a pure attitude of fight without having paralyzed arms 10 km further.

207 kg. Lighter than a GSR 750, with 54 hp more in the boiler room. Driving sensations and agility will be there, and a certain level of safety with all the on-board electronics. However, with such passion in the hands, no chip will be able to catch up with the bike if you push it beyond the laws of physics. Open wide and play c .., OK, but only if you have the technical background to go with it. You are not on a Gladius or a CB 500; you are on a cannon ball which asks only to go very fast and very hard. Fortunately, the wick is digital, and can be consumed in different ways..

The on-board layout recalls the spirit of the S 1000 RR, with a similar instrument cluster. We twisted the piece of plastic that separated the digital window into two parts and revised the layout of the info. To improve everyday life, the options allow you to afford heated grips, cruise control or saddlebags. But the smell of performance has invaded the list of accessories offered: carbon parts, adjustable footrests, full titanium HP exhaust system lightening the 4.5 kg machine, shifter, folding control lever, data logger , forged wheels …. The list is not exhaustive. Basically, there is everything you need to create an S 1000 R Cup..

BMW’s first foray into the world of the overpowered roadster, the K 1300 R, could not appease the cravings for a wild machine. The S 1000 R meets this expectation. It is quite simply a hypersport which tore its clothes by smashing the exit grid of the circuit. Even calmed, the breath of its engine is able to orbit you after having stretched your arms over 50 cm. BMW has created a road monster; more intended for pilots than defenestated scoundrels. 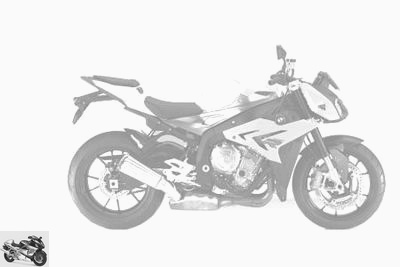 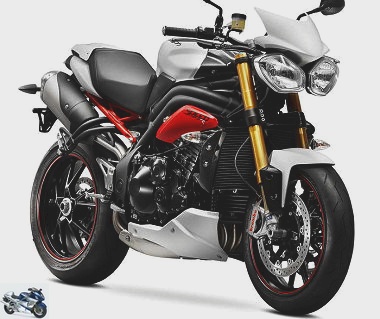 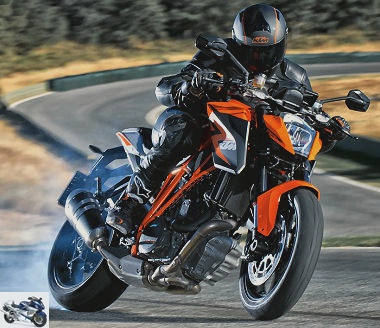 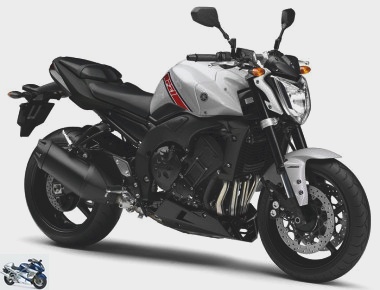 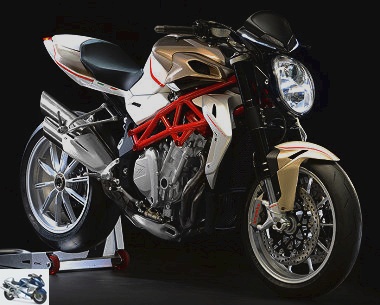 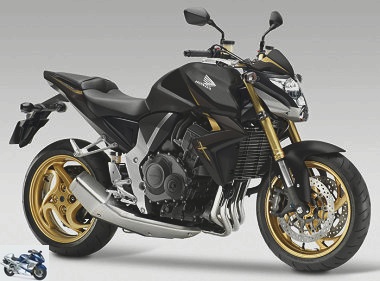 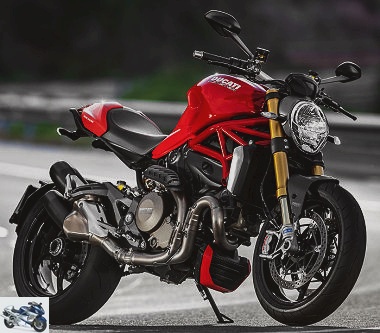 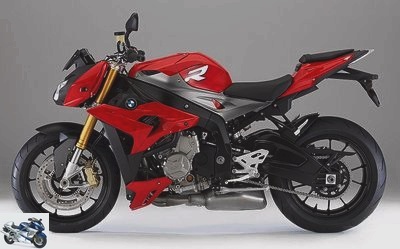 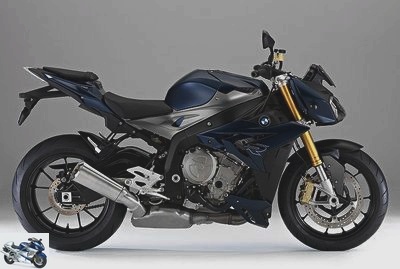 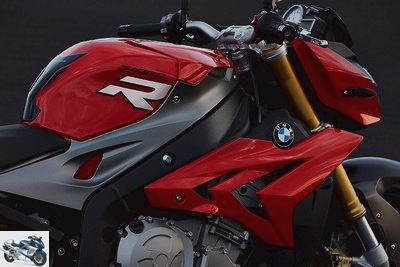 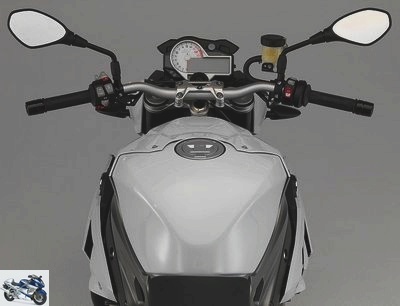 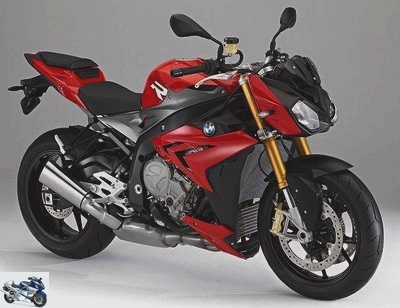 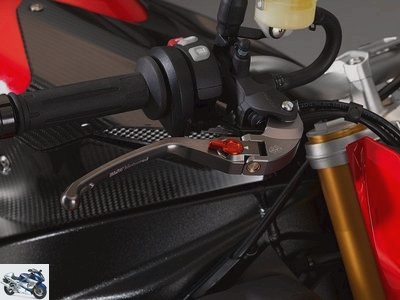 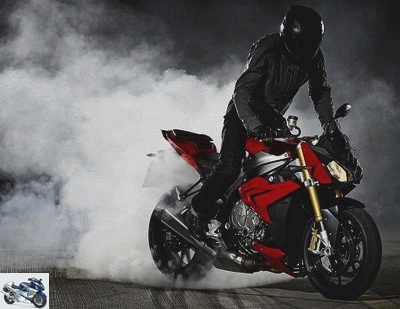 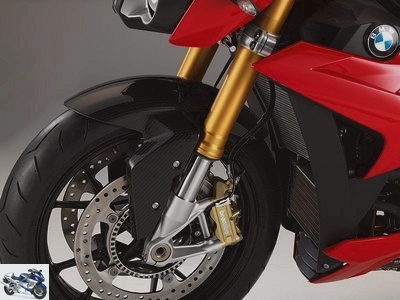 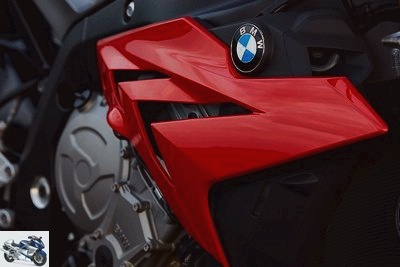 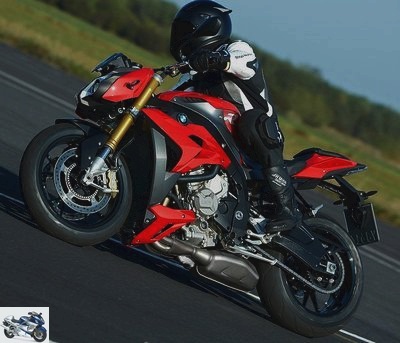 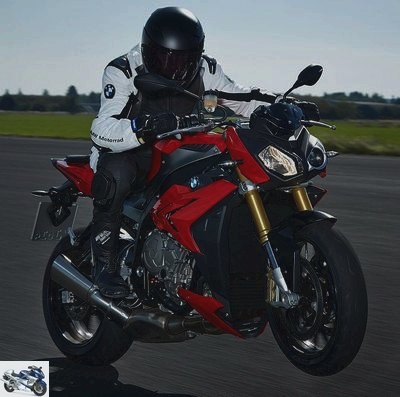 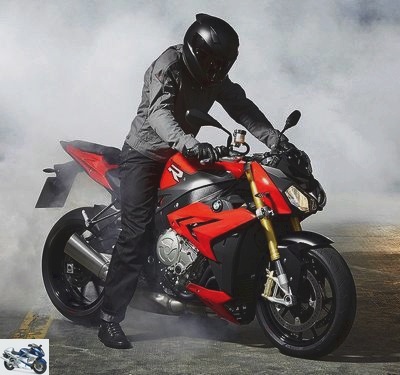 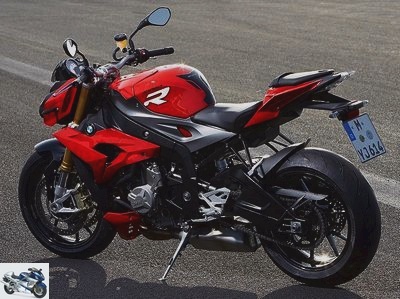 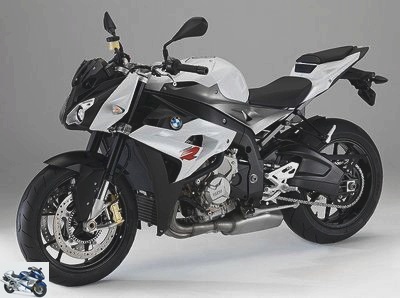 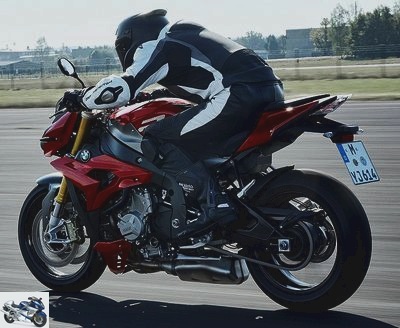 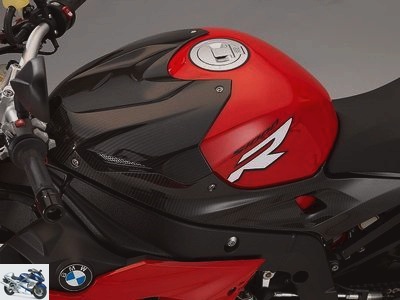 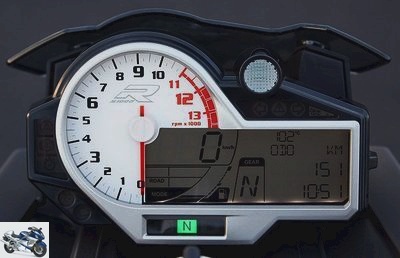 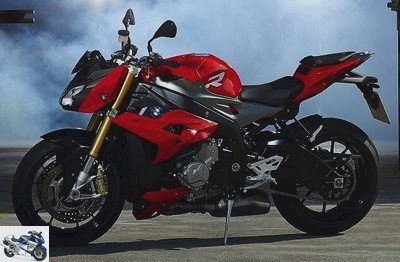 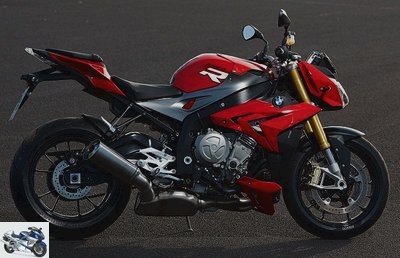 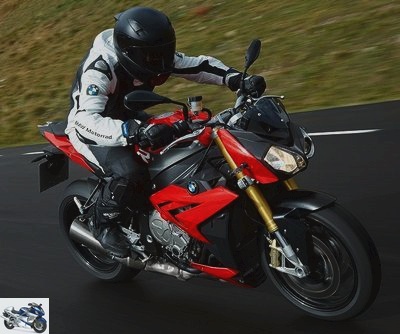 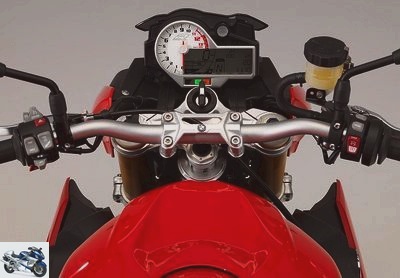 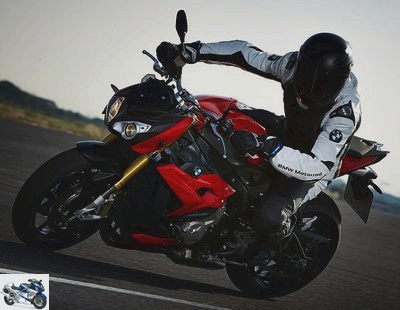 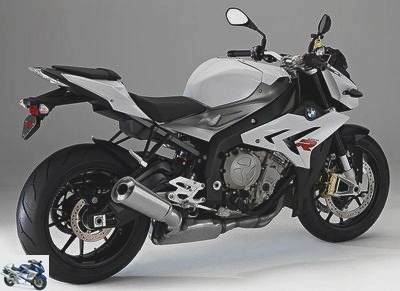