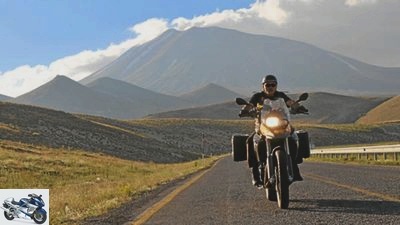 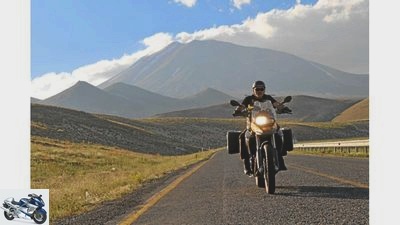 1/23
With Mehmet Colak, called Mokka, we went on a tour from Viersen to Istanbul and then across Turkey. Mocha we get to know interesting people and fascinating landscapes. 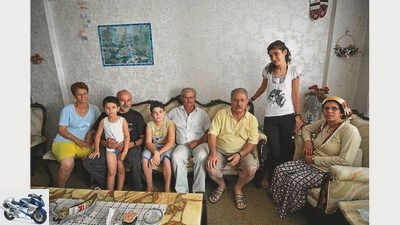 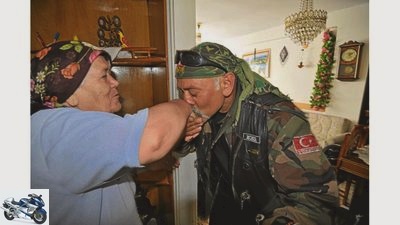 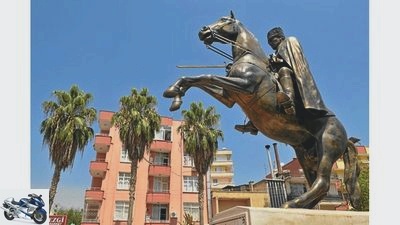 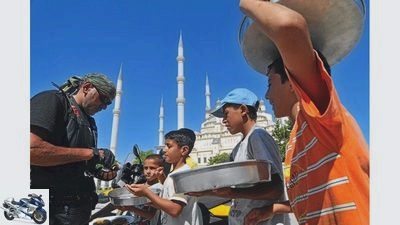 5/23
young pastry sellers in front of the Sabanci Central Mosque in Adana. 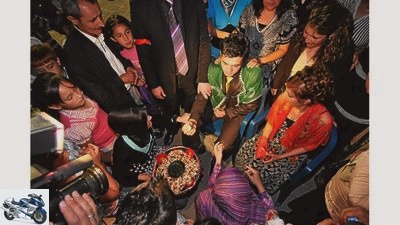 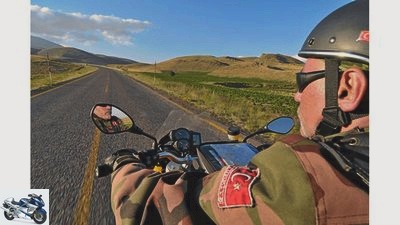 7/23
Road at the foot of the extinct volcano Erciyes Dagi. 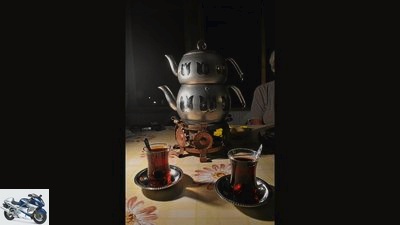 8/23
The invitation to black tea is typical of Turkish hospitality. 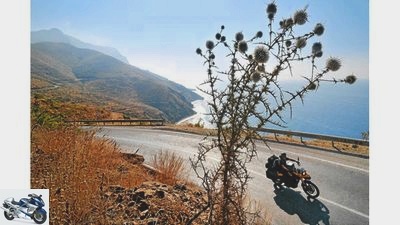 9/23
The coastal road from Silifke to Gazipasa. 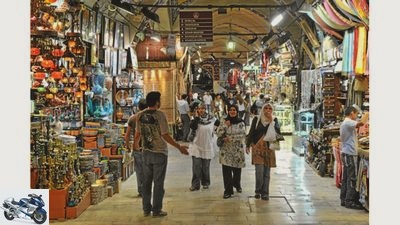 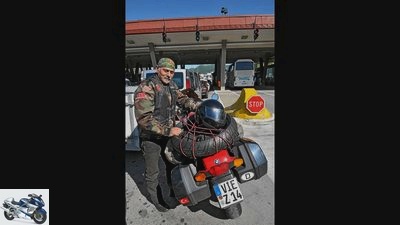 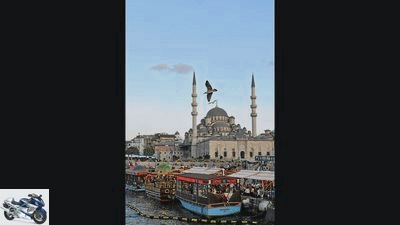 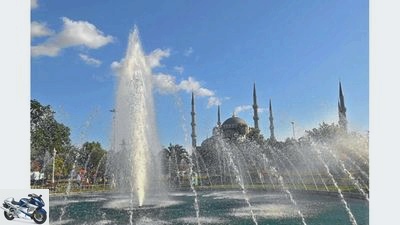 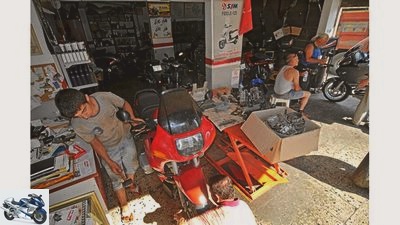 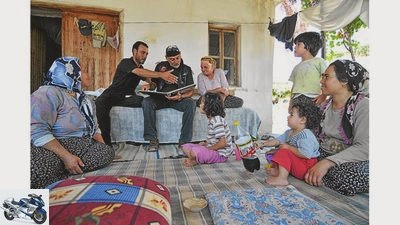 15/23
Mokka’s visit is an island in everyday life and a reason to celebrate. 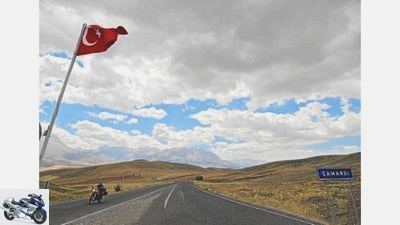 16/23
Country road romance on the way from Mersin to Cappadocia. 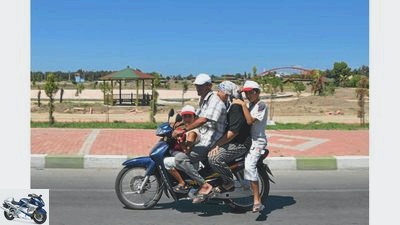 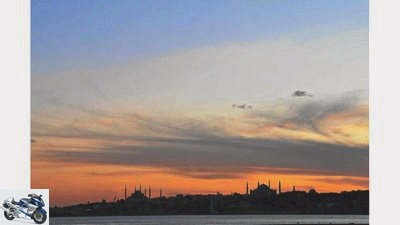 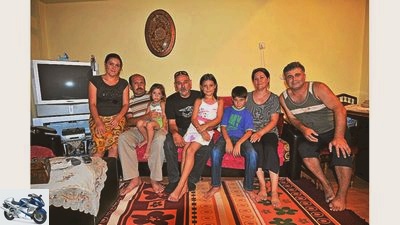 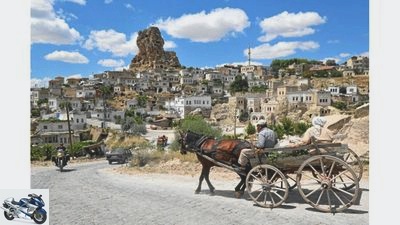 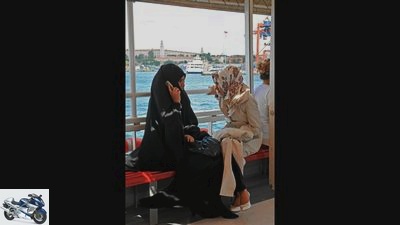 21/23
Ladies with burqas and cell phones in Istanbul. 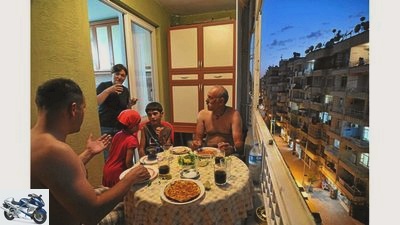 22/23
Family happiness on balconies: Mocha with the in-laws in Mersin. 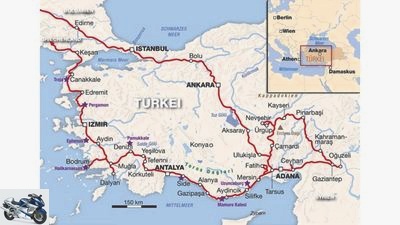 Round trip: by motorcycle through Turkey

From Viersen to the Turkish Riviera: a round trip
Through Turkey by motorcycle

Mokka, a Turkish motorcyclist from the Lower Rhine, visits his many relatives back home: Viersen, Istanbul, Cappadocia, Mersin, Turkish Riviera – our author accompanies him on a 10,000-kilometer trip to interesting people and through fascinating landscapes.

Mehmet Colak, also known as Mocha, is undoubtedly Turkish: Mongolian mustache, pirate scarf (headscarves are worn by women) and a camouflage jacket, as if he were in the military. At the same time, the 44-year-old is typically German: flip-up helmet, BMW and a spare tire in his luggage, as if it were going to the end of civilization. Exactly the right thing for a tour of Turkey with plenty of kilometers to scrub. And to shake hands: those of the in-laws in Mersin and those of an extensive family.

Viersen, Zagreb, Istanbul. 2600 kilometers in 52 hours. Then finally time for the old town Sultanahmet with the whirlpool of the bazaars, for the Blue Mosque and Hagia Sophia, for the decoupling visit to the barber and for a picnic on the rocky shore of the Bosphorus with Oktay, Saniye and Batuhan. After the prologue, it goes across Turkey. Somewhere along the way, Mokka’s flip-up helmet disappears in the system case, instead an airy braincap now protects against sunburn.

From Viersen to the Turkish Riviera: a round trip
Through Turkey by motorcycle

Mersin. House canyon, Ozdemir, sixth floor. A kiss on the hand for Ana, as a mother-in-law, deeply adored by the toughest guys like her own mother. I get to know nice people right away. Durdane, Songul and Hamit, owners of a motorcycle workshop and Mokka’s friend. A new torque wrench is presented as a gift, for which the boss promptly reciprocates with an inspection and a replacement battery for Mokkas RS, thereby helping the failed ABS get going again.

First visit to Mokka’s sister Adalet and then departure to “Aunty day”. Three kilograms of soft, sticky Lokum are bought as a sweet souvenir, shortly afterwards a head protection disappears in the suitcase. “You no longer need to wear a helmet here”, says Mocha in all seriousness.

The graves in the cemetery in Nacarli have withered from the heat, including those of Mokka’s parents. They are far apart, because even Allah does not guarantee lifelong love. On to Taskoy to aunt ulkye. Her husband recently died, and in the pain of this, the stranger is deeply depressed, even if he has never had close contact with you before “Plaintiff”. 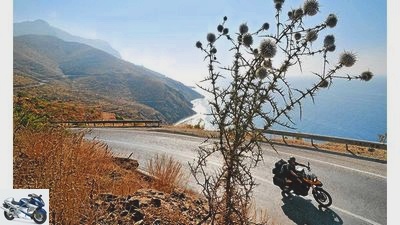 The coastal road from Silifke to Gazipasa.

Back in Mersin, Ana’s youngest son rings the bell from his brother-in-law “Murat, the killer” called. The 30-year-old bodyguard in the service of politicians has a career in a special command against the PKK and reports things that should not be passed on. But positive things also come to mind, for example an invitation to a wedding in Kayseri. Lets go. And, as soon as you arrive, start straight away for the round around the Erciyes Dagi.

The extinct volcano is 3,917 meters high, the eruptions of which once created the ludicrous tufa landscapes of Cappadocia with space for cave dwellings and entire underground cities.

The 90 meter high castle rock of Ortahisar is one of the highlights, but the culmination point of Cappadocia is Goreme. No doubt, a journey of 3300 kilometers wasn’t too far for this landscape. Not even if 120 minutes later we have to go to the wedding in Kayseri in our host Jusuf’s Ford Transit. Well, sometimes the family also makes sacrifices.

Pinarbasi, not to be confused with Pina Colada, is the next destination. 100 kilometers course east. Almost endless mountains and steppes, probably as far as Mongolia. Sharp right and then, after a surprise visit to Rabiye, once wet nurse of Mokka’s wife Servet, another 300 kilometers to Gaziantep. The asphalt shimmers damp from the heat, awakening the longing for a Norwegian fjord. The tree-speckled flanks of the mountains look like a man’s back with thick hair.

Gaziantep. At the mosque we meet Kadir, another friend of mochas. The energetic 65-year-old was a dispatcher for a textile machine factory and always likes to tell the following story: Kadir vom understood that he came to Germany as a guest worker in May 1969 and was sent to have bread by colleagues “Good Morning” in the bakery only half, turned on his heel and came back the next day in the hope of getting bread today, as promised. This was repeated three times until the black-haired silence clerk got scary and she called the police. She then laughed, together with the interpreter called in, whether the solution to the riddle was almost broken. 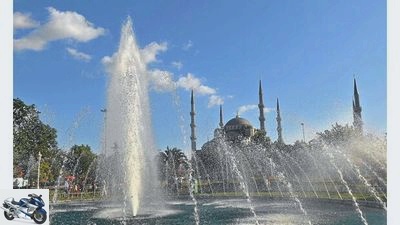 The blue mosque in Istanbul.

Last evening at Ozdemir’s in Mersin. While grandson Mercan raps through the booth, fidgeting after his idol 50 Cent, the 17-year-old Gizem shows me the cell phone photo of a young boy, for whom she finds the term boyfriend in her rudimentary English vocabulary. “Bomb”, Uncle Murat comments as if shot from the gun on the apparently sensitive topic.

“Yes Mediterranean, now it’s your turn”, Mocha gets in the mood for the return trip. In Susanoglu, we are waiting for Sahin, den “king” the Turkish Sultan. Instead of going on the Fireblade, the President of the Hamburg Motorcycle Club went on vacation in the E-Class. He wants to persuade us to stay, but has no chance against the prospect of 200 curves on the coastal road from Silifke to Gazipasa.

The road cuts through the mountainsides like a Kilic, a Turkish curved sword. Then we rashly decide to eat at Tekeli on the terrace of the Erciyes restaurant: head soup with cheekbones. To get full, another 100 kilometers to Gazipasa. On the way beautiful beaches with turquoise water, then a lot of concrete leaves us speechless in Alanya. Where’s Ylmaz? It’s best to ask the police, because Mokka’s brother-in-law works there. In front of the straw widower’s balcony, uniform shirts hang on the line to dry, with traces of blood from the last assignment on them.

Late performance of “Unicycle arif”, most prominent motorcycle stunt rider in Turkey. Years ago, Mokka competed in drag races with him on the drag strip. Today Arif makes a successful stoppie with mocha on the pillion, then we set off towards Side and Antalya. 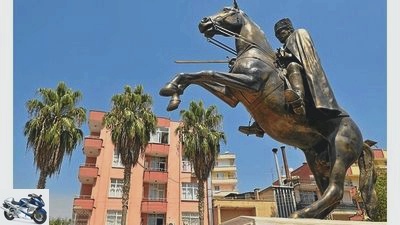 Even if the rear tire of the red BMW had done something – the skin is coming off now. After all, why do you know Ahmet, who used to be a mechanic at Hamit in Mersin and now runs his own motorcycle shop in Antalya? He is not our only address there. Mokka’s sister-in-law Zeynep, who earned her flatbread as a bailiff after studying law, and husband Hamit, also a police officer in the civil service, are our hosts for two nights.

“You’re going to get mad on the beach”, moans Mocha and lures me into the cooler mountains. 24 degrees only at Comaklibeli, 1560 meters high. The road is rough but inviting to keep the throttle cables under tension. Mevlit is waiting for us in Yesilova. He has a house there by the Salda Golu excursion lake. The 37-year-old was born in the Sauerland and now works as an IT specialist in Nettetal. He visits his parents’ hometown almost every year. As the former owner of a TL 1000 R (Suzi had to give way to marital peace), he is immediately enthusiastic about a moped ride around the lake.

From the lake we romp back to the sea. In a gentle descent, it goes briskly through the mountains to the finish line in Bodrum, the nightlife Mecca of the southern Aegean. “The air is beautiful. You really notice how the oxygen flows into the lungs”, notices Mocha. We are sitting high above the bay of Karaincir on the roof terrace of Ahmet and Tulin. It could go on like this for ages, Mokka still knows enough people here, but 72 hours later and 3400 kilometers further, the police stop in front of my garage in the Ruhr area right behind me: “We got a call that there was a motorcycle with a defective taillight on the way.” Welcome to Germany. 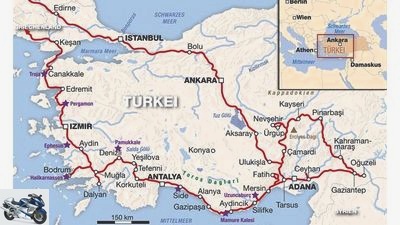 Turkey’s spectrum ranges from the Mediterranean seaside resorts to archaic villages in the Anatolian highlands. Even if you don’t go to Ararat: curves and mountains predominate.

Getting there:
By land, it is a good 1900 kilometers from Munich via Zagreb, Belgrade and Sofia to Istanbul. With the exception of the section from the Serbian Nis to Sofia, the route consists of (toll) highways. You should plan two days of travel time for this. In addition: the waiting times at the borders are difficult to calculate. Alternatives: ferry passage from Ancona or Brindisi to Cesme near Izmir, one person with a motorcycle from 265 euros, 56 hours at sea, www.marmaralines.com. Or the car train from Villach to Edirne for 283 euros per person and motorcycle, information at www.optimatours.de.

Documents / foreign exchange:
An identity card is officially sufficient to enter Turkey; it is better to take your passport and the green insurance card with you for all eventualities. The means of payment is the Turkish Lira (TL), the conversion is easy: One Turkish Lira is roughly equivalent to 50 euro cents. There is cash at machines. There is often a huge selection of credit card readers at gas stations.

Stay:
If you don’t like temperatures around 40 degrees, it is best to visit Turkey in spring or autumn. The bathing season on the beaches of the Aegean Sea extends into October.

Accommodation:
The offer in the tourist resorts is on a western level. Apart from that, the standards are drastically lower, but the friendliness of the people increases.

Motorcycling:
The roads along the coast are well paved, the further you get into the hinterland or highlands, the more compromises you have to make. Anyone who drives a road machine can largely avoid gravel. If you choose the right route, Turkey offers enduro owners enough terrain to dust off. It is difficult to understand that in Turkey there are lower speed limits for motorcycles than for cars: 70 km / h on country roads, 80 km / h on the (mostly toll) highways. Comforting: Violations are rarely punished.

Motorbike rental company:
Those who prefer to travel by plane can find details on motorcycle rental in Turkey online, for example at www.gs-sportreisen.de, www.martintuerkay.com or www.worldrentalanya.com. A recommendation from Ahmet Ozugurlu, head of Olimpiyat Motor in Antalya, is www.motoaslanko.com.