Sport according to Bridgestone.

Just a year after the arrival of a BT 16 Pro which performs particularly well on wet roads, Bridgestone is driving the point home with its new S20 tire to re-position itself in the hypersport category. Presentation on the fabulous Portuguese route of Portimao. 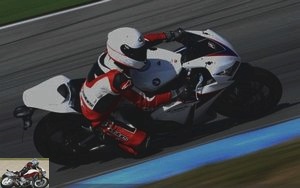 As the name suggests, the S20 is part of the new generation of Bridgestones tires that debuted in 2011 with the arrival of the R10. New names which will simplify the ranges: R for Racing, S for Sport and probably in the short term a new “T… ..” for tourism which will eventually replace the BT 023. It will therefore be easier to navigate from now on. find in the Bridgestone range …. 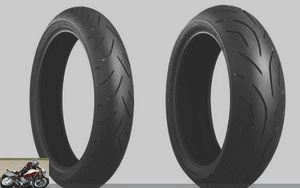 To put it in context, let’s go back to 2008, the year of arrival of the BT016, which was then distinguished by its trigum technology, called "5 LC", since around the central band, we had two types of soft rubber on both sides. other, thus delimiting 5 different zones. A very high-end technology, a little expensive to produce which pushed the Japanese manufacturer to present the BT 16 pro in 2011. The objective was twofold: to relaunch a product that the innovations of the competition had somewhat made forget and put back to level of performance, judged to be behind in wet conditions. Progress helping, the BT 16 pro could also be satisfied with a bigomme technology, (3LC) while showing clear progress on wet track. Having thus demonstrated its know-how, Bridgestone could come up with a new product, the S20, which takes full advantage of the technological improvements and the image of the BT016 pro.

With the S20, bridgestone wanted to reconnect with the versatility of a BT 14 (which is no longer in the range)
while reconciling the performance of the BT 16 pro on wet roads.

The idea this time was to also achieve a noticeable improvement in handling on dry track, up to the gap between the 16 and the 16 pro in the wet. Best of all, Bridg has made a point of maintaining performance throughout the life of the tire. To achieve the result, the rear S20 retains the bigomme technology (3 LC), but adapts it by reducing the width of the soft rubber so that it is only present in the extreme areas, used during strong angles. In fact, the so-called "hard" rubber zone is widened, which ensures more even wear of the part most commonly used. Longevity therefore gains, without the performance, and in particular the full-angle grip, suffering. Besides this aspect, the engineers improved the footprint which, unlike the 16 pro, steadily increases with the incline of the bike, improving the rider’s confidence. They also worked on the position and shape of the sculptures..

In contrast to efforts to homogenize and slow rear wear, the S20 front sees a reduced share of "hard" rubber. A paradox which can be explained by the manufacturer’s desire to improve the rider’s confidence in the front tire, thanks to a high level of grip regardless of the angle. They also increased the floor space, regardless of the tilt. As the front tire wears less quickly than the rear, this development does not affect the overall longevity of the S20 train..

It was therefore on the superb and very technical track of Portimao that we had the pleasure of testing the S20, which we had discovered during the presentation of the Kawasaki 1400 ZZR to Nardo. Indeed, the S20 was chosen as the original equipment for this particularly fast motorcycle. Before hitting the track, ex-GP driver Jeremy Mc Williams tells us about the track with an emphasis as developed as his innate sense of attack. Among the words entered, we will retain the following expressions: Blind turns, "too late", bumps and dangerous.

It’s pretty clear, the Portimao route has several blind bends and areas where you should not go sightseeing, because those behind you are swooping down on you without seeing you…. Learning the track is therefore tricky, as much as it is true to tradition, our opener of the day "opens"…. on a large scale, which inevitably provokes the dropout of the last of the group. In short, we saw the diagram, we had bits and pieces of explanation and once on the track, we got by. We are unfortunately used to being rotten by this kind of enigumènes having a strong sense of unstable balance on 2 wheels…

For my first session, I opt for a 600 GSXR, easy bike par excellence. The experience is all the more interesting as I find a known machine that I was able to test with Metzeler sportec M5s, a direct competitor of the S20. 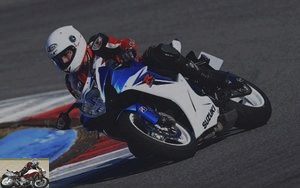 The pilot’s learning and "derusting" in the early morning is therefore very smooth. The bike is easy to position, it’s both stable and manoeuvrable, that’s all I could see on this first test run. Then I move on with a more "typical" mechanic since I get on a Triumph Daytona 675 R. Both more demanding and more efficient, the Daytona amazes me here with its ease. On its handlebars I found the 675 which had won me over so much during the presentation of the Bridgestone BT 003 RS. Clearly the Bridges suit him well. It’s a fabulous bike and on a lap despite the long straight, not much can resist it. Delayed braking thanks to its featherweight, rapid sequences, the S 20 pass it all without flinching. A real treat ! A colleague who has opted for the S 1000 RR dislocates me in the straight line. He will pay the price for the English woman’s agility in the winding portion and will admit not having been able to hang on afterwards, tired by the violence of the Teutonic mechanics.. 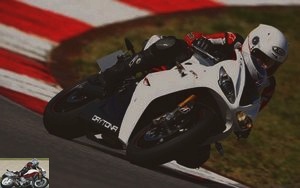 I end the morning with a "softness" in 600 CBR, which confirms the goodwill of the s20. The grip is satisfactory, the front gives the pilot great confidence and does not straighten under braking. Stability in a straight line and under braking is excellent. After the meal break, it will be time to get down to business, now that I have more or less assimilated the layout of the track. 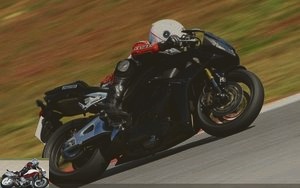 From 2 p.m. I rush to the Aprilia RSV4 …. which is already taken. So I get on the S 1000 RR 2012. Mom, I’m scared, and I’m right! The beast is incredibly powerful! Suddenly I understand all the better how I taxed my colleague with the 675, because I am being dropped off in my turn by the 3 English cylinders. Having horses is good, but you still need to be able to control them. Admittedly the traction control does its job perfectly in full transparency, but I do not manage to keep sufficient contact of the front wheel with the ground. In fact, the bumps at the exit of the parabolic, which conditions the straight line, prevent me from opening wide, because they seriously undermine the stability of the machine. It’s really too messy for me, this engine is not human! Yet on the rest of the route, the bike is disconcertingly easy, as long as you say "you" to the throttle … Over the laps I gain confidence, but the S 1000 RR does not let go. easily tame ! 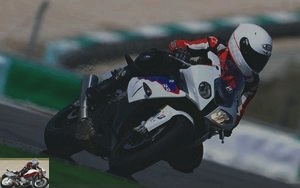 For my final session, I would not be entitled to the Aprilia RSV4, but to an “easy” CBR 1000 R in full with an “Akra” line. Next to the BMW, it’s relaxing, yet at the end of the straight line I take the brakes at 285! (Impossible to take a look at the odometer on the BMW, in miles moreover). But, in addition to its greater docility (180 hp anyway), and its ease, the CBR is characterized by the absence of traction control. In fact, when exiting bends, the machine should be properly straightened out before accelerating, otherwise drifts are regularly felt. We are touching here the limit of the rear tire which, let us remember, is not a tracker, but a simple hypersport which will still be able to occasionally track. However, its very progressive drifts from the rear confirm the very considerate character of the S20, whose front envelope never stalls. It’s rather reassuring ! 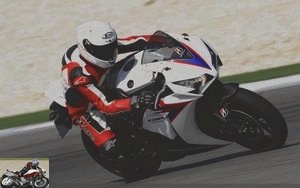 To equip your hypersport with sport / road tires, you therefore have the choice between the BT 16, the BT 16 pro and the S 20.

Despite its expensive trigum technology, the BT 16, largely amortized, will be offered at the floor price of 200 €! It is an excellent alternative to equip a used sports car, as long as you do not pay too much attention to the performance when the asphalt is wet.. 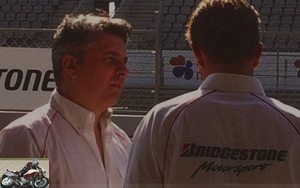 Le Repaire: You made comparisons with the tires of the competition. We can know a little more ?

Yann Le Ny: yes, these tests were carried out by the independent laboratory "Motorrad Test Center", an offshoot of the famous German magazine, created by former journalists. We had mandated them and we made our “EU.P.G. (European Proving Ground) in Italy for them to carry out their test. They are the ones who bought the competing tires in the network and for the S 20, they went to use themselves directly by drawing randomly from our depot since the distribution of the stock had not yet started..

LR: Who were the competitors and what were the results ?

YLN: The S20 was opposed to the BT 16 Pro, its predecessor, still at the price, to the Dunlop Sportsmart, to the Michelin Power Pure and Pilot Power 2 CT, then finally to the Pirelli Diablo Rosso II. In the dry, the S 20 comes out gagan with 161 points out of 180. It is ahead of Sportsmart and the diablo which are in a handkerchief (respectively 154 and 153 in that order), then come the 16 pro and the 2 CT (139 and 133 pts) while power pure brings up the rear with 119 points. On the braking tests, the classification is identical.

LR: nice score, what conclusions do you draw ?

YLN: We can clearly see that we have achieved our objectives of improving performance in the dry compared to the BT 16 and that we have risen to the level of the best and even ahead of them..

YLN: Yes, we have achieved the feat of bringing it to the level of the BT 16 Pro, which remains the winner by a small point, and to equalize the Dunlop Sportsmart, another benchmark in the wet in this segment. I am talking about an exploit because it is difficult to improve the grip on a dry track, without degrading the behavior on the wet ground. So we are very proud of our S20.

LR: Typically in this kind of tests, it is often the agent who wins, all the more easily as his tires play at home while driving on the track where they were not developed. ?

YLN: Certainly, but EUPG is not a motorcycle development track. It is an auto tourism validation track, it is not comparable to the Mireval center for Dunlop or to that of Ladoux for Michelin. To be precise, the motorcycles used were S 1000 RRs with the traction control disabled and two riders used them to cross the results.