The street racing tire according to Bridgestone

The successor of the S21, the new hypersport road tire from Bridgestone is called S22. We discovered him on the Jerez track, riding a very wide range of sports cars. Between rain and sun, we benefited from the mix of ideal conditions to gauge it…

The competition between the five big manufacturers never stops. Every three years, Bridgestone renews its hypersport road tire. The S21 therefore abandons the role of headliner in favor of the S22 and now moves to the second line. Its competitors are the Michelin Power RS, the Pirelli Diablo Rosso 3, the Metzeler M7 RR, the Conti Sport Attack 3 and the Dunlop Sportsmart MK3 which we have just tested as well. To defend its chances in this hotly contested category, the Japanese manufacturer has stepped up to the plate and called on its best chefs to develop the recipe for its new road sport…. 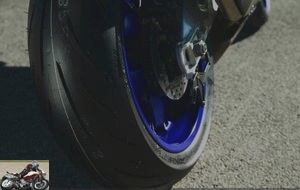 Discovery of the hypersport tire

Visually, the newcomer stands out from its predecessor, with a more open design with a higher notching rate. A trend that could surprise, but that Fabian François, the technical director, explains by the desire of the designers to improve both the feeling of the pilot and the feedback. This reduction in the contact surface, associated with a reduction in rigidity, promotes very slight deformations which allow the rider to feel the road better.. 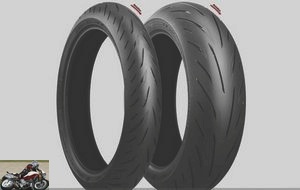 To compensate for this compromise, which could generate additional wear, Bridgestone has worked on the shape of the footprint and the quality of the rubber mixes. Thus, the mechanical slip rate on the contact surface is greatly reduced, which reduces natural wear over the miles. The objective was indeed to do as well as the S21, which marked a clear increase in endurance mileage, while improving performance on dry tracks and on wet roads. On this second point, the contribution of the design promotes drainage. But the quality of the mixture is just as important. Thus, the silica reinforcement benefits from a more intimate mixture thanks to smaller molecules which are in fact 25% more likely to be in contact with the road. This improves the behavior of the tire at low and medium temperatures.. 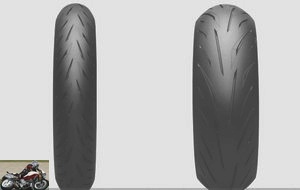 Faithful to its dogmas, Bridgestone opts for a front bigomme, rear trigum solution. The rear central band is surrounded by two bands which have the same mixture as the front central band. This blend incorporates a new, more adherent resin filler that increases mechanical grip. Thanks to this work, the S 22 claims a 5% increase in lap times on a wet track and a corner speed 15% faster compared to the S 21. A significant development that we will not be able to verify ourselves with the chrono in hand. , but that we could not wait to feel on the handlebars…

The vagaries of the weather are now part of our daily lives. Our Andalusian awakening took place in the pouring rain. Fortunately, by the time we got to the circuit the rain has calmed down, but it is on a wet track that we will discover the S22 during our first sessions. To start with an "easy" bike, I get on the KTM 1290 Super Duke R. Widely provided with electronic assistance, relatively light, well suspended, well braked, it has all the qualities for a first track experience. Its large handlebars and its relaxed position make it easy to catch up with any escape if necessary. In short, despite its 185 horsepower and the coolness of the wet track, I am in relative confidence. A confidence that will not undermine the S22, which works wonders in these delicate conditions. The guidance is good, the handling is excellent and the announced very good feedback is effective. You can clearly feel the track in the handlebars and the grip is definitely there, whether under braking or accelerating. Certainly, no question of tempting the devil for this first discovery session in the early morning, but the sensations are excellent.. 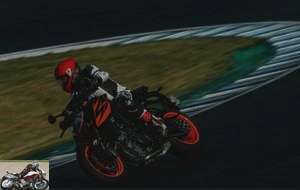 The Jerez circuit was wet for the first runs

Note that the surface of the circuit has just been redone and in addition to being very smooth, it offers an excellent level of grip. The conditions are therefore ideal for reaching the limits, your own or those of the tire, depending on your level of handling. As the morning progresses, the small showers will follow one another and we will be able to test the S22 on damp then drying ground, before enjoying a magnificent sun in the afternoon. The morning will therefore confirm the excellent behavior of the S22 at low and above all medium temperatures, as we had been told. In the end, in the absence of road driving, these conditions give an idea of ​​the potential of this tire when you take your motorcycle to go to work on a wet spring morning. Because let’s not forget that this tire is intended for road sport use and that you can mount it on your roadster. A priori, even if the asphalt of your daily journeys will never be as perfect as that of Jerez, you can count on it, it will do the job.. 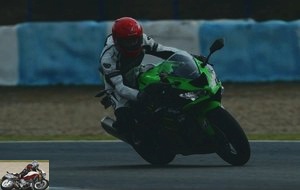 Dry tire test – The sun looks good on it too

The concern with sport / road tires is their hot behavior. It is indeed difficult to be good everywhere! However, as for the Dunlop MK3, this is what we were told. So let’s go to the music, this afternoon, we’re on the gas! In order to check the intrinsic qualities of the S22, I decide to resume driving on the KTM, just to see if the sensations are as good in cold as in hot and at high speed. No doubt, in these new conditions, the S22 confirms all the good that we already thought of him in the morning. The torque and power of the large Austrian twin do not scare him. However, our rider, which already has around 9 sessions of a quarter of an hour in the tires, is starting to show signs of wear. But this does not translate into brutally degraded behavior. In the exits of fast curves with the throttle wide open, we notice a slight very gradual drift from the rear. The front for its part, remains unperturbed. It is only on the most extreme loads that we feel the two wheels slip, very gradually there too.. 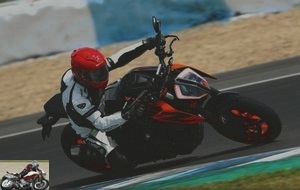 The KTM 1290 Super Duke R with the Battlax Hypersport S22

On the handlebars of the Austrian roadster, I rediscover the magic of the behavior that I had felt during our test of the Pirelli Diablo Rosso Corsa II. Maneuverability, precision, ease. On a dry track, the S22 fully exploits the potential of the nasty roadster … A sacred reference! 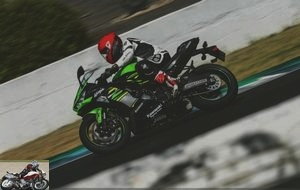 Battlax S22 test at Jerez on the Kawasaki Ninja ZX-6R

During a new stint, I jump on a Honda CBR 650 R … In my haste, I took it for a 1000 in the middle of the other machines. At the first acceleration, I see my mistake! However, the experience is interesting. In the morning I had already tested a ZX-6R 636 in the wet and returning to a "small displacement" confirms the easy and natural sides of the S22 whatever the grip conditions. I end the day with a CBR 1000 RR, which I had also been able to use in the morning, on wet greasy ground. For this last run, I have new tires. Less turbulent than the KTM, the Honda moves less, but on its handlebars I appreciate the precision of the S22, its ability to enter turns on the brakes and change lane when cornering. So many qualities that will be useful on the road. 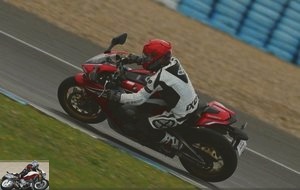 The S22 in a curve on the Honda Fireblade

Conclusion of the test

Very efficient on the track, the S22 should also be on the road, in lower temperatures. Very convincing on wet ground as on dry ground, it claims a great longevity specific to a daily use. However, we were unable to verify it over several days. Qualities that make it a direct competitor to the Dunlop Sportsmart MK3 that we tested a few days earlier, under very different conditions. Impossible to establish a hierarchy, but these two live up to their category. The level of performance achieved by these "road" tires really should impress the most jaded. ! 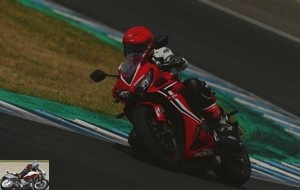