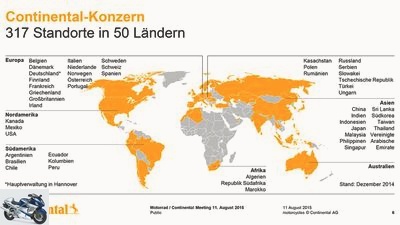 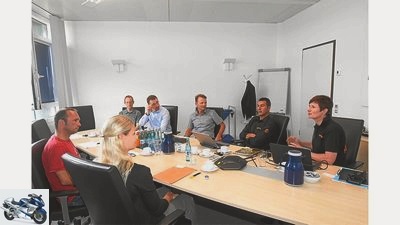 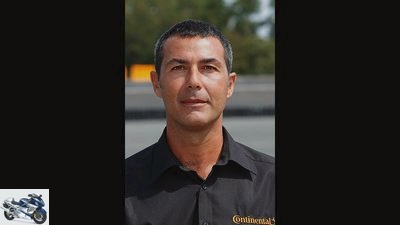 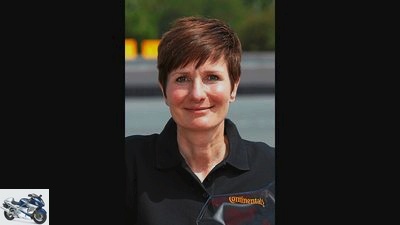 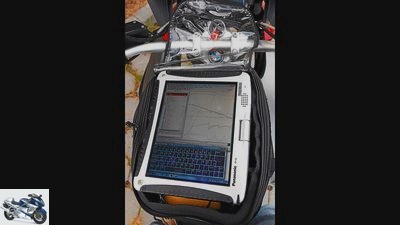 4/18
Measurement electronics: On the Frankfurt Conti test track, values ​​are recorded and parameters are adjusted immediately. 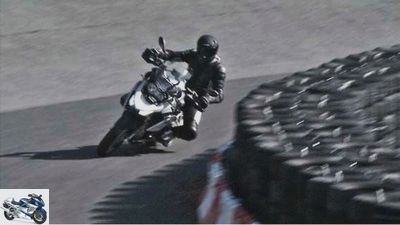 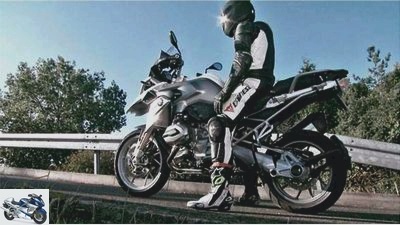 6/18
The hill start aid prevents rolling back when stopping on an incline. 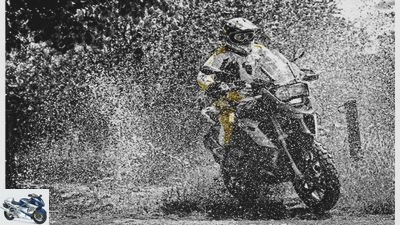 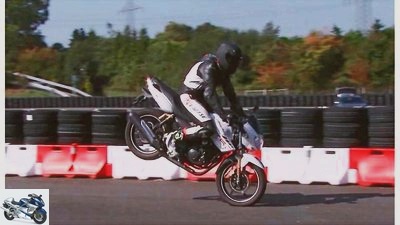 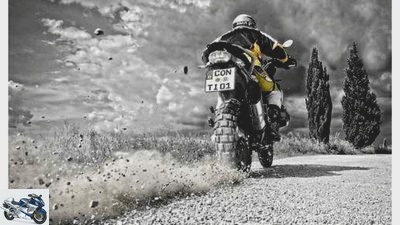 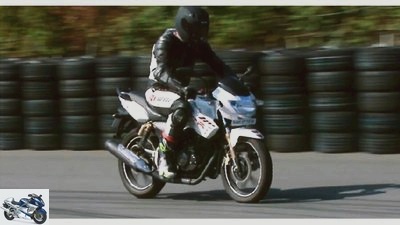 10/18
What ABS can do: The core competence is to prevent blocking. 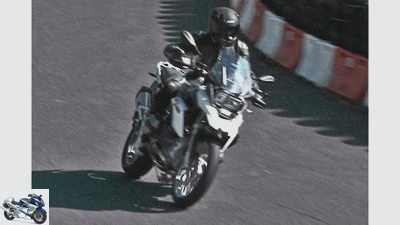 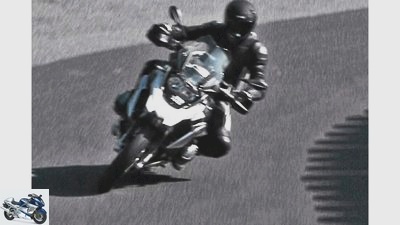 12/18
With ABS cornering: the motorcycle decelerates but does not give way … 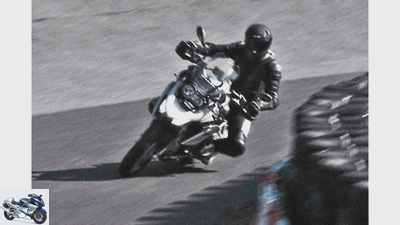 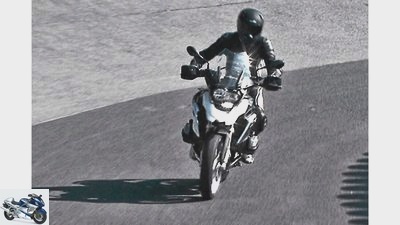 14/18
Without cornering ABS (III): It straightens up and wants to go straight instead of around the bend. 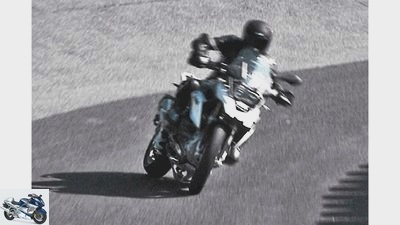 15/18
Without cornering ABS (II): The motorcycle can lean sideways. 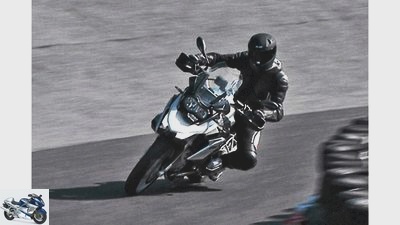 16/18
Without cornering ABS (I): emergency braking in an inclined position. 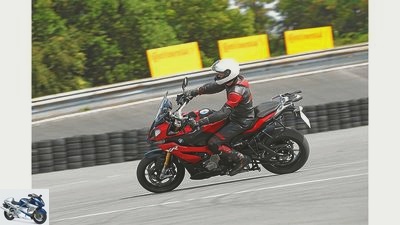 17/18
Is it safe to hit the brakes fully despite the lean angle? Special software makes it possible with the current Continental ABS. 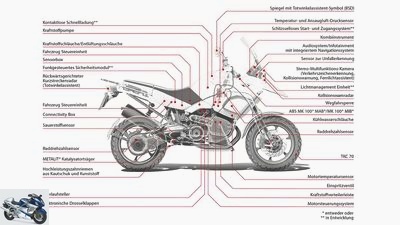 18/18
Boxer engine with belt drive? No, not a model of the future, but a diagram for all motorcycle features that various areas of Continental AG can develop or deliver for every type of motorized two-wheeler.

Continental? Power in tires. But also in the most modern ABS, in two-stroke injection and even in talking oil stains – a visit to the Frankfurt “Chassis & Safety Division “.

The red BMW rolls lively up the steep ramp of the test track. Halfway up, the driver brakes and the machine comes to a standstill. Hans-Georg Ihrig grins almost mischievously at the audience, puts both feet on the ground and loosely takes his hands off the handlebars, demonstratively holding them up. Actually, the 228 kilogram BMW S 1000 XR should now roll back uncontrollably and fall over under the Continental vehicle tester. But it doesn’t. It stands on the slope as if welded.

We have just seen the demonstration of an “extended control function” of the latest Continental ABS: MHG, which means “motorcycle hold” in the inevitable industrial Denglish & Go ”stands, also known from the car and from the BMW K 1600 models as“ rollback lock ”or“ hill start aid ”.

When you hear “Continental” as a motorcyclist, you first think of tires. After all, the group started out as the “Caoutchouc-Compagnie” in Hanover in 1871. “That is still our core segment to this day,” confirms Sascha Till as Product Manager Motorcycle Tires. Conti has just presented the TKC 70 as a more roadworthy addition to the almost legendary Grobstoller TKC 80, and it actually covers the whole range of possible two-wheeled rubbers – from scooters to super sports bikes. “In the tire sector, the technology transfer also takes place from the motorcycle to the car,” adds tire specialist Till.

As an example, Till cites the “Black Chili Compound” mixture, which was developed by Conti technicians especially for the two-wheeler sector, but is now also used in some car tires. Usually, however, the path of technical development goes the other way around: from cars to motorcycles. In addition to ABS and its constant further development, the adaptive headlights are a nice example. “Basically, one can say that such techniques are first developed for cars and then transferred to motorcycles as required. That was clearly the case with adaptive headlights, although the hardware, i.e. the headlights and lamps, did not come from us, but from other manufacturers, ”explains Lothar Kienle, at Continental Head of Development for Motorcycle ABS.

Cars and motorcycles are closely interwoven

How many of the 4,000 employees at Conti’s “Chassis and Safety” technology site in Frankfurt are concerned with the motorcycle issue? Well, you couldn’t say that because of these overlaps. “Both vehicle areas, ie cars and motorcycles, are closely interwoven. We definitely have to change personnel between the areas here, and that’s wanted, ”says ABS developer Kienle, who himself switched from the automotive sector to motorcycles, but has always been a motorcyclist in his private life.

One of the most important innovations in Kienle’s division is cornering ABS, which Continental is called oCB (Optimized Curve Braking) and which is offered as an optional extra for some new BMWs. The prerequisites for the optimized and as safe cornering as possible are a lean angle sensor and modern Can-Bus electronics. If both are on board, the cornering ABS can in principle be retrofitted as a software update.

Also software, but still a long way off, is the “e-Horizon” that several Conti teams are currently developing. This “electronic horizon” knows exact map and topography data and connects it with information that is transmitted by other vehicles. In an interview, Contis “Motorcycle Key Account Executive” Bettina Lehmann explains how such networking can also make motorcycling safer in the future.

But Continental is not only looking at the future of high-tech bikes. The other end of the scale is also worthwhile: the millions of small motorcycles. Currently, the number of small bikes with ABS is still less than one percent worldwide. But one thing is certain: it will grow. Conti wants that too. Back to the Conti hill start aid shown at the beginning with the BMW S 1000 XR. Except for the BMW K 1600 and R 1200 RT it is nowhere to be found – does it come from many models? “You have to ask the manufacturer.” We have seen that Conti also tests them in other machines. 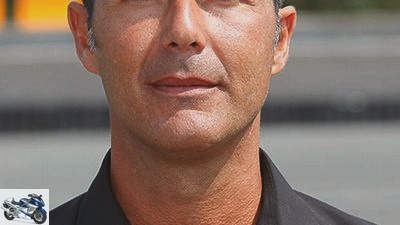 MOTORCYCLE: In 2016, the new Euro4 emissions standard for motorcycles will be introduced. What changes are to be expected as a result?

Alessandro Cataldi: You have to differentiate between two- and four-stroke engines. As far as the four-stroke engine is concerned, our developments have long since reached the level of Euro4. The only change that an end customer (meaning the buyer of a new machine from 2016, ed.) Will actually notice is the mandatory control lamp of the on-board OBD diagnosis. We have long been working on meeting the Euro5 standard, which will come in 2020.

Alessandro Cataldi: Let’s go back a little for now. So far, suppliers and vehicle manufacturers have still found ways of making the two-stroke carburettor comply with emissions regulations. With Euro4 this will no longer work without loss of performance – and the high specific performance is precisely the advantage of the two-stroke engine. One thing is clear: the two-stroke engine will die without injection. But Continental offers many different solutions here. We are the world market leader in the field of two-stroke injection, and Euro4 is no problem for us. Our systems comply with the limit values, even without any loss of performance.

MOTORCYCLE: Will two-stroke injectors be more expensive than carburettor models?

Alessandro Cataldi: Well, the question should be asked directly to the manufacturers. But I think the effort is comparable to that of the last generation of electronic carburettors. They were also necessary to comply with limit values ​​- and of course have made motorcycles more expensive. On the other hand, we will be able to use components for two-stroke injection that are also used in four-stroke engines. That makes the production cheaper again. In addition, fuel consumption will decrease with the injection and start-up behavior will improve.

MOTORCYCLE: What will the Euro5 standard mean for the two-stroke from 2020?

Alessandro Cataldi: We don’t know that either. As I said, it is not a problem for four-stroke engines. With the two-stroke engine, we’re still waiting for the limit values ​​to be set. The bottom line is that we are confident that we will master this hurdle too. 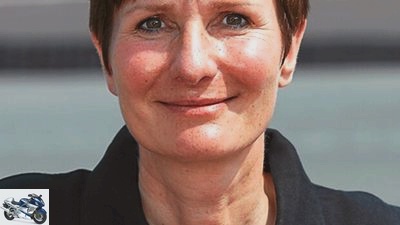 MOTORCYCLE: Take a look into the future: Where do you see opportunities to further improve motorcycle technology and safety technology?

Dr. Bettina Lehmann: If we are only talking about premium motorcycles and not about the global mass market, then the requirements focus on three areas: safety in the form of the best possible braking system and optimal tires, but also comfort and information. And in some cases these areas are very closely linked. For example via e-Horizon, a system that provides the motorcycle and the driver with information about the route ahead, which in turn also serves to improve driving safety. The question here is how we can enable the driver to look into the future. It’s going to be very, very exciting. Techniques that we are already working on today will help avoid accidents, for example caused by an oil spill on the road ahead, even if it is not in our field of vision.

MOTORCYCLE: How should an oil stain signal to me as an approaching driver: “Watch out, otherwise you will slide away on me within 100 meters!”?

Dr. Bettina Lehmann: The oil stain cannot do this, but other vehicles can. The same applies, for example, to an accident that has just occurred or a thunderstorm cell. We will soon be able to use a vehicle as a sensor via e-Horizon and pass on important information to other vehicles.

MOTORCYCLE: Is that based on so-called car-to-car technology?

Dr. Bettina Lehmann: Yes, that’s right. More precisely, it is then a matter of car-to-server-to-bike communication. But the technology not only informs the following vehicles about what is happening. The e-Horizon uses high-precision digital map data and also informs the driver, for example, if he does not approach the curve correctly and it closes, just like a good co-pilot in a rally. That could well be an issue for motorcyclists.

MOTORRAD: So another assistance system. What else is conceivable?

Dr. Bettina Lehmann: The motorcycle as a wireless power supplier. The devices that we carry around with us are becoming more and more compact and versatile, but they also need more and more electricity.

MOTORCYCLE: That means my cell phone is charged in my pocket as soon as I am on the motorcycle?

Dr. Bettina Lehmann: That depends on the bag. With “Wireless Power Charging” technology, which we already have in cars today, you could easily charge a cell phone in the tank bag if the backpack offers this technology. The contact surface required for charging would be very easy to integrate into the motorcycle. That would be about convenience.

MOTORCYCLE: That leaves the point of information.

Dr. Bettina Lehmann: Right. The question is, how do we share information with friends on the go? How do we get news?

MOTORCYCLE: But not “social media” on the motorcycle?

Dr. Bettina Lehmann: But. Maybe that’s not an issue from a German point of view, which we like to drive in a sporty way. But in other countries it is. People like to drive in groups and they want to be networked. Or adaptive cruise control …

MOTORRAD: … which then automatically adapts my pace to that of Erich, who is driving ahead?

MOTORCYCLE: Is Continental already working on the self-driving motorcycle??

Dr. Bettina Lehmann: We really don’t do that today. But when the self-driving car becomes a reality, the subject of self-driving motorcycles will also be so topical that we can imagine it a few years later.

MOTORRAD: But I want to drive myself in the future too!

Dr. Bettina Lehmann: But we want the motorcycle to intervene in a critical situation, for example. Today many people ride motorcycles that are stronger than their abilities. In contrast to a car, the driver of a motorcycle must be informed before an automated emergency braking operation, otherwise he may go over the handlebars. This information could come via the handles so that the driver can get into an active body tension. A lot is imaginable.