Exactly 50 years ago, in 1968, Mario Agrati and Henry Keppel, former managers of Garelli, founded Fantic Motor in northern Italy, south of Lake Como, with the aim of producing mini-motorcycles, go-karts and enduros mainly intended for the American market. The following year, at the Milan show, the urban scrambler Fantic Caballero debuted, taking the name of Keppel’s favorite cigarette brand, then powered by a 50cc Minarelli two-stroke engine.

This adorable and affordable little Italian girl was able to attract the attention of teenagers to reach the charts and quickly become a world bestseller, quickly joined by versions of 100 cm3, then 125 cm3 also powered by Minarelli engines, but now specifically built for Fantic. 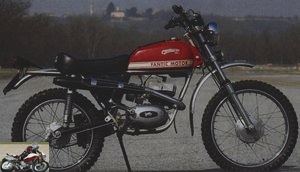 If you turned 14 within the next quarter of a century, before Fantic ceased production in 1995, chances are you’ve joined the thousands of fantichisti who dream of one day riding your own. Caballero for sunset riding wherever the trails lead. Either that or adopt a cool and relaxed ride with the Fantic Chopper (50 and 125) with its handlebars raised and its fork extended, production of which began in 1973..

But all good things come to an end and, although Fantic was relaunched in 2003 by Federico Fregnan, a former owner of Caballero, at a small factory in his hometown of Treviso north of Venice, the brand never really did. took off as Fregnan had other projects in mind, leading the family business making Elektra coffee machines, one of Italy’s most famous brands. So, when at the end of 2014 Fregnan was approached by a consortium of local entrepreneurs led by Mariano Roman, former head of product development at Aprilia for 23 years, to see if he would be ready to sell them Fantic Motor, a transaction quickly took hold. was concluded in exchange for an amount estimated at two million euros and accompanied by royalties on future sales.

In the three and a half years since, Roman, now CEO of Fantic Motor, has overseen a major comeback campaign for the historic brand. One of the key elements of this comeback was the arrival at dealerships of the two new versions of the Caballero, or rather four since the 250 and 500 are available in Flat-track and Scrambler versions, as well as for the 125 version released a little earlier and powered by a 4-stroke Minarelli engine that Fantic was already using on its off-road range. 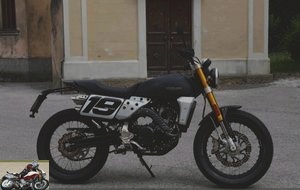 It was in the foothills of the Dolomites, north of the Fantic factory, that we were able to get our hands on the two Scrambler sisters for a test drive..

The 250 and 500 are powered by liquid-cooled 4-stroke single-cylinder engines with single overhead camshaft distribution designed in Italy by Piaggio, but produced in China by the partner of the transalpine manufacturer, Zongshen. These elements were sent to Fantic to be installed in an identical chassis shared by the Scrambler and Flat-track models. The difference is essentially a different styling of the same platform, with identical powertrains fitted with the same Arrow exhaust design.. 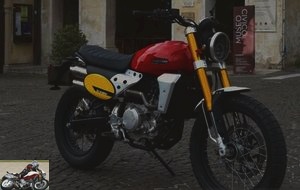 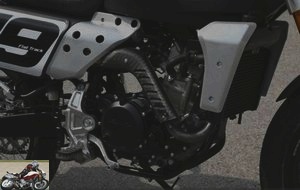 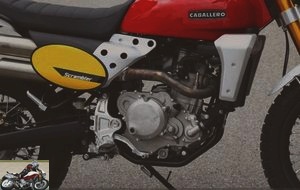 The price for the two 250 versions is 5,790 € while the Caballero 500 are displayed at 6,790 euros. But one only has to look at the components used for either Scrambler to understand where the money has been put. It is evident that no limits have been placed in the construction of these motorcycles, each having its own distinctive style thus reminiscent of the original Caballero of the 1970s.. 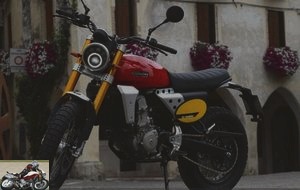 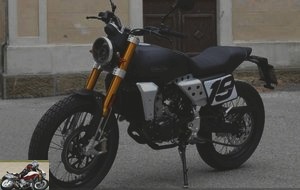 Next to the Arrow side exhaust, the tubular steel frame carries a 41mm Fantic FRS inverted fork, non-adjustable, but offering 150mm of travel. The footrests are cut in aluminum, as is the triple tee that holds the fork. Like the latter, the rear shock absorber is an FRS model mounted on the aluminum swingarm and offering 150 mm of travel, while being adjustable in rebound.. 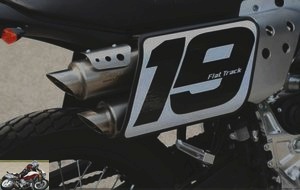 Muffler of the Fantic Caballero 250 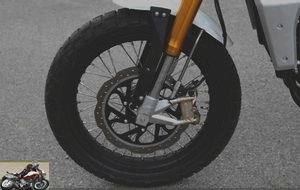 Front brake of the Fantic Caballero 500

Front and rear lighting is LED. The 19- and 17-inch spoked black rims are shod with Pirelli Scorpion Rally STR tires which, unlike models from competing brands, are not too felt when accelerating on the asphalt.. 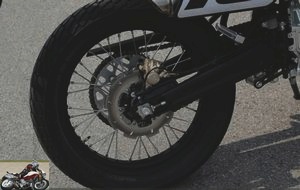 Rear rim of the Fantic Caballero 250

Basically, the saddle peaks at 820 mm, but on our test version we benefited from the saddle high option at 840 mm. There, the smallest riders will find it difficult to touch the ground. Fortunately the reduced weight of the two machines greatly facilitates maneuvers.. 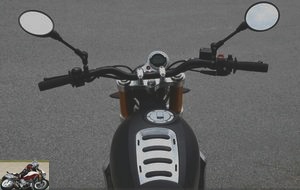 The wide Tommaselli handlebars, equipped with Domino grips, are fairly high and thus provide an upright and natural riding position. On the other hand, if the instrumentation opts for an LCD screen, it is not the most intuitive and readable that we have known, nothing to do for example with that of a KTM 390 Duke. 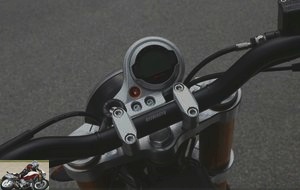 And that’s what you will do, because even the small engine of the Fantic 250 has a real appetite for revs with good distribution of power and torque from low revs. It’s worth turning the grip hard enough if you want maximum torque when accelerating, but once in the last two gears the engine offers surprisingly a fair amount of extension and, thanks to the shaft of balancing, is shown to be rather smooth, although you start to feel the vibrations through the footrests when you go up the towers. 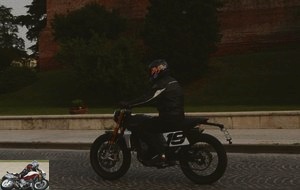 The Fantic Caballero 250 in town

The gearbox is smooth, both ways. The light clutch and the controllable power dosage, but resolutely enthusiastic (it accelerates quite hard compared to the usual quarters) make it an excellent bike to use in the city where the saddle raised to 840 mm allows to have a good vision once in city traffic.

Get on the handlebars of the 500 and we discover an identical motorcycle, but different, with much more presence at the bottom compared to its little sister, which results in better acceleration and an irresistible tendency to part wheelie as a greeting to pedestrians. waiting at the traffic light. Sorry mister agent, I couldn’t help myself and it’s a very nice Alfa Romeo that you drive with such nice blue lights on the roof… 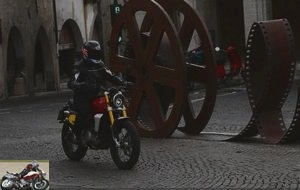 The Fantic Caballero 500 in town

There’s plenty of torque at low revs, but despite that, the same clutch as the 250 makes it enjoyable in town and in traffic..

Fast lanes are clearly not the Caballero Scramblers’ favorite playground. Between the lack of wind protection and the studded tires, we cannot say that we are well off. Nothing prevents you from going to put your wheels there and certainly not the engine which will allow you to reach legal speeds without hindrance, but you would be wrong to deprive yourself of the small roads which pass nearby. Come on, let’s take the next exit… 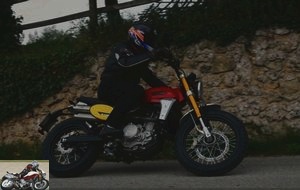 The fairly long 1.425mm wheelbase provides good stability on fast descents, while the relatively wide Tommaselli handlebars provide excellent leverage on twisty roads. This is where it is also the most fun to drive the 250 Caballero. 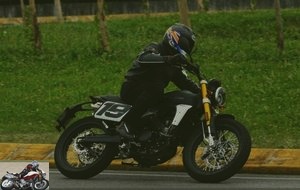 It must be said that the dry weight of the 250 is only 140 kg, its big sister displaying 150 kg. It’s funny to see how much bigger valves can weigh, because that’s the only difference between these two motorcycles…. 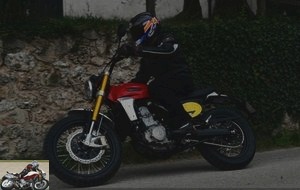 The Fantic Caballero 500 on a curve

The Caballero 500 is a model that leads to even more dependency. With that extra punch available when you see space opening up in front and down one or two gears to have fun gaining ground. 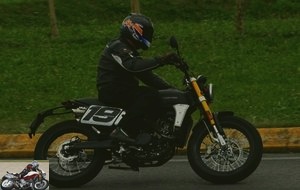 This expressive engine is really the strong point of this bike. By the way, expect to see this excellent 450cc Zongshen SOHC engine powering many models from other manufacturers in the years to come.. 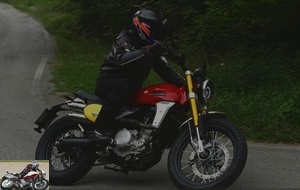 The Fantic Caballero 500 on a curve

Nothing to say on this point, the equipment of the cycle part is up to the claims of the two Italians. Offering a fairly healthy behavior on the road, Pirelli compounds will allow you to go out on the tracks on occasion. We may regret the absence of an engine guard which could add a welcome protection in this type of outings.. 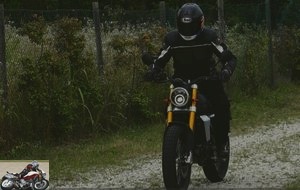 The Fantic Caballero 250 on the track

Braking is shown to be quite effective given the low weight of the machines and the available power. No bad surprises on this point and we appreciate being able to deactivate the Continental ABS, a point that will probably prove to be invaluable on the tracks that we have not had the opportunity to walk.. 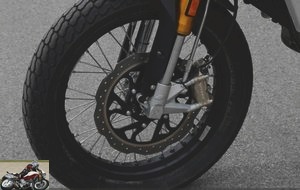 Brake of the Fantic Caballero 250

Essentially intended for short trips, Fantic Caballero saddles do the job for this kind of outing. At the rear, the possible passenger has enough space on the scrambler, but will be less comfortable on the flat track version.. 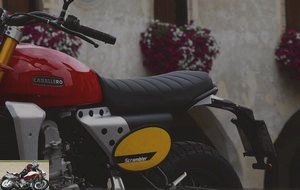 The saddle of the Caballero 500 Scrambler

This well-equipped, well-developed and well-designed single-cylinder Caballero duo, along with their Flat-Track sisters who all display excellent build quality and outstanding performance, proves without a doubt that Fantic is back and with products to match. of its history. 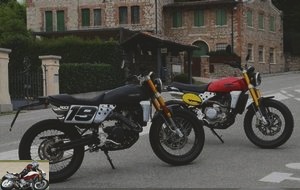 The fact remains that European buyers will have to be convinced with a limited network in France and prices commensurate with the equipment. Prices which are therefore not particularly attractive vis-à-vis the competition when we know that a KTM 390 Duke (made in India) costs 5,899 euros for comparable performance on paper. This perhaps reflects the fact that the motorcycles are produced at the Fantic factory in Treviso and not in China or India, with only the engine and transmission produced in China and then shipped to Italy. But you won’t see many like yours in your neighborhood.

The technical sheet of the Fantic Caballero 250

The technical sheet of the Fantic Caballero 500

One thought on “Comparative motorcycle test Fantic Caballero 250 and 500”