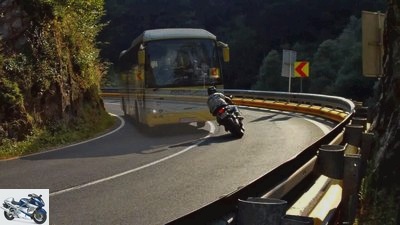 If the basic skills of cornering, namely gaze guidance and steering impulse, have become second nature, you can start fine-tuning the curve line.

Steering impulses and gaze guidance are the essential basic skills that one should have. Because with a targeted steering impulse, the stubbornest goat can go around the corner, and with good eye guidance at the end also out again.

It can also be practiced while biking, paddling, skiing, or skating, even while serving. Waiters know this: when they stare spellbound at their full glasses on the tray, the liquid inevitably spills over. If, on the other hand, you direct your gaze to the guest’s table, everything will work by itself. We warmly recommend trying it yourself – you will see that it is correct.

ORDER IN THE SHOP

But which is the right line? On racetracks, the shortest possible line is driven with the lowest possible incline and the highest possible speed, the so-called ideal line, using the entire lane. On the road we follow the so-called safety line. Sometimes it requires a more inclined position, but it makes it easier to get an optimal view and keeps us away from oncoming traffic. Logical: the earlier we can see, the sooner we can turn in and hit the gas on a flat line. Ideally, the speed at the exit of the curve is higher than at the entrance.

In order to master rapid changes in lean angle, as required, for example, quickly changing curves, we use the steering impulse already described. Because these maneuvers do not succeed either through well-intentioned weight shifts or the ominous thigh pressure, but only through powerful and targeted steering impulses. Ideally, this is done by exerting pressure on the inside handlebar end.

For example, to maneuver a Honda CBF 600 through a curve course at 100 km / h, the driver has to push the handlebars with up to 300 Newtons, i.e. a weight of around 30 kilograms, when changing lean angles.

The rule of thumb “press right – drive right” and “press left – drive left” Of course, it gets stuck more easily and should become the mantra for everyday driving.

How easy it is to take turns depends not only on the riding technique but also on the type of motorcycle. A long wheelbase, like high weight, is a hindrance when cornering easily. The tires also have a lot of influence on driving behavior; Tire tests, such as those regularly published by MOTORRAD, for example, provide clarity about the steering and cornering properties. 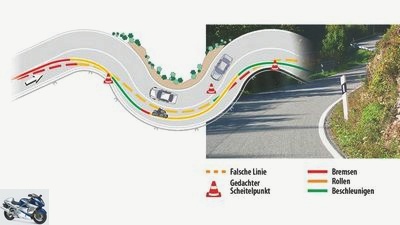 If I approach a curve too tightly, so I turn in too early, I not only see the further course and possible oncoming traffic unnecessarily late, the too flat line in combination with high speed can also bring me dangerously close to oncoming traffic.

Getting your head over the line in left-hand bends because the wagon becomes as wide as a car when tilted, at best leads to unattractive dangling, and at worst to evasive falls or a collision. The continuation of this wrong choice of line leads straight to the opposite lane in the next right-hand bend.

To the right, of course, we are just as wide, so we have to keep a distance from the rock face or the delineator post. On narrow, confusing bends, however, we often have no choice but to stay far to the right and drive slowly.

On the left in the picture an almost classic problem curve: The course of the road cannot be seen for the most part, which is why a car or motorcycle can appear unexpectedly – uncomfortable to dangerous when you cut the curves.

The so-called undercutting of the curves is therefore better, especially since you always have to expect that a driver in oncoming traffic will cut the S-curve and, in the worst case, come along on the wrong side of the road. If we have then cut the curve ourselves, our chances are extremely slim. 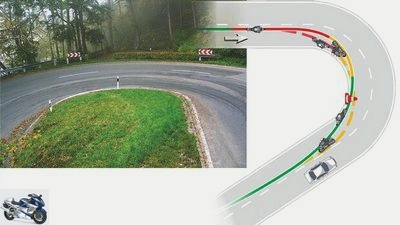 Even a seemingly ordinary curve harbors sources of error.

Here is an almost classic curve which, thanks to its clarity, allows a finely arranged ideal line and corresponding inclines. However, if you cut into the curve (dashed line), the motorcycle must drive the greatest incline at the exit of the curve, if you do not want to go on a collision course with possible oncoming traffic.

In the case of undercutting (solid line), on the other hand, the apex is later (pylons). You can see better around the bend and can therefore accelerate much earlier on the flatter line, which more than makes up for the slightly slower cornering speed. 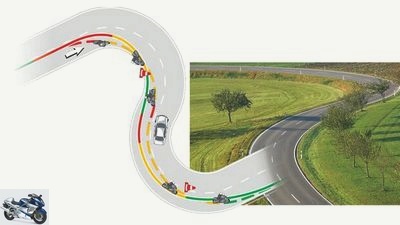 In alternating curves, the advantage of undercutting comes into play even more, because the apex, which is set late in the right-hand bend, allows the following left-hand bend to be approached from far outside.

The driver on the wrong line (dashed) is pushed in the direction of the opposite lane, and he has to turn hard from an extremely unfavorable position for the following left-hand bend. A liquid, round line cannot be made with it. 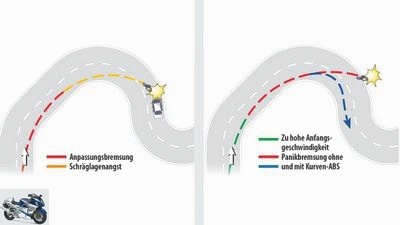 Too fast and / or not sloping enough into the curve? It can end in pain.

Fear of leaning. The result: the curve radius ends on the opposite lane. Most frequent cause: insufficient training in tilting and incorrect gaze guidance. Tip: If it gets really tight, force the motorcycle through the bend using the “push” driving style, and look at the road in the direction of the exit of the bend.

Freezing on the brakes. The problem: too late, panic-like braking into a corner from high speed, the brake is not released at the turn-in point, the motorcycle refuses to turn and drives off the lane. Intensive training under professional guidance helps here. And cornering ABS, which always allows just enough brake pressure that the grip is still sufficient and the motorcycle remains largely on track.

Rushed overtaking attacks. It is very dangerous to squeeze past a car on the last groove before the next meandering curve. The better solution: pull over to the right, take a little break, then relax and surf the curve slope.

Insufficient tire grip. Only tires with good grip allow crisp lean angles. In addition, the tread depth and air pressure must be correct.

Insufficient ground clearance due to slack spring elements. Solid components such as the frame, engine housing and manifold system can mercilessly lever out the bike. Possible remedy: Change the chassis setting (increase the spring base and possibly the compression damping).

Not only when it gets tight, but at the latest then everyone should remember the mantra of guiding their eyes: look in the direction of the exit of the curve, steering impulse, push down! In principle, the following applies: wherever we look, we go. Look far ahead and focus on where you want to go, i.e. on the right lane, not on the forest or possibly on the guardrail. With the right eye there are the best chances of getting around the corner unscathed.

And what if we do have to brake in full banking in the middle of the curve? Is it because we have misjudged ourselves, are too far inside or outside, an obstacle blocks the planned path or dirt on our track necessitates a different line? Then everything has to happen very quickly. The footbrake is taboo, the dynamic shifting of the wheel load would cause the rear wheel to break away too quickly. The means of choice is the handbrake, which we apply sensitively, never jerkily, but with great force. Now it depends on whether we have room straight ahead and want or have to stop completely, then we can straighten the motorcycle with a brief steering impulse and come to an upright stand.

If, on the other hand, we want to or have to stay in lane, perhaps not even braking to a standstill, then a strong pressure on the inside of the handlebars keeps the bike on track and thus on the road. The focus is again on guiding the eyes. If we want to straighten up and come to a standstill straight on as in the first example, then our gaze must be directed straight out of the curve. If we want to stay in lane, logically our gaze remains in the direction of the exit of the bend.

Assuming good grip, you can decelerate properly when braking in an inclined position. However, we have to apply the brakes very sensitively, which is best practiced during safety training. The dosage, depending on the incline, could be done by a modern cornering ABS.

There is yet another opportunity that we can really use simultaneous braking and steering, depending on the situation: when swerving during emergency braking. The latest investigations by the Institute for Two-Wheeler Safety (ifz) with 100 volunteer test drivers have clearly shown that a lane offset – perhaps saving – can be achieved even during emergency braking with a powerful steering impulse. Here, too, good visual guidance helps, as does an experienced use of steering impulse technology.