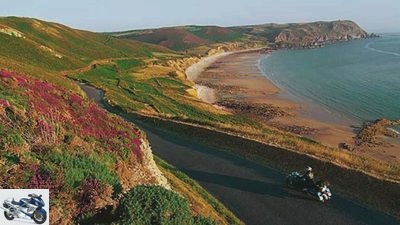 Daring combinations of curves, grandiose landscapes, goose bumps; There are stretches that drive you completely crazy. MOTORRAD names 20 of the most brilliant destinations.

Bold combinations of bends, grandiose landscapes, goose bumps – there are routes that completely drive you crazy. MOTORRAD names 20 of the most ingenious destinations on the European continent for uncompromising driving pleasure. 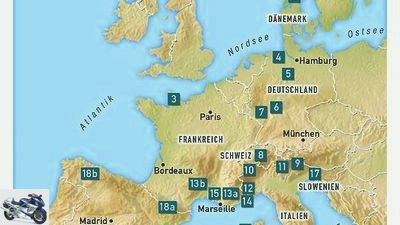 An overview of Europe’s dream routes. 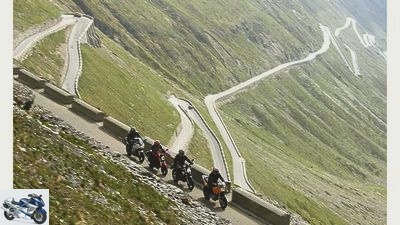 No question about it, the Stilfser Joch in South Tyrol is one of the highest, most difficult and most varied alpine roads of all. The 2758 meter high “Queen of all passes” lures on its steep east ramp with no less than 48 hairpin bends. If you add up all the curves, you get 150. In return, you gladly accept that the asphalt has had its best years for a long time. Or that traffic jams here, especially on weekends. All trifles. This route is a must for every motorcyclist. No more and no less. 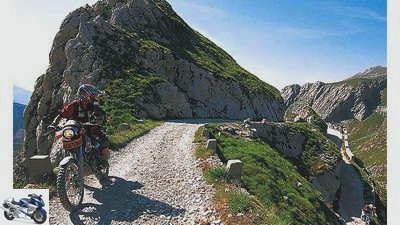 Do you fancy loneliness and gravel? The Ligurian border ridge road offers both. The sometimes quite demanding route begins at the Col de Tende and leads 85 kilometers through unpopulated area – making it the longest of all former military roads in the Alps. As an insider tip, however, this spectacular path, which is up to 2000 meters high along the Italian-French border, has long since ceased to exist. So avoid the weekends if you really want to enjoy solitude. 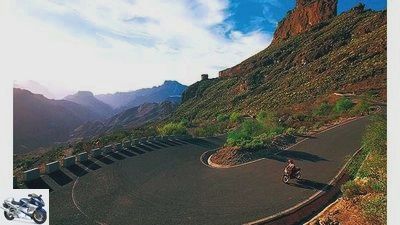 the “GC 60” in Gran Canaria – one of the most spectacular routes ever! Endless curves, perfectly paved through the mountains “Los Cumbres” in which huge pinnacles protrude into the sky like gigantic fingers. A wonder world. Just like the rest of the island, whose wild topography offers a perfect mix of grandiose landscape and fun motorcycle area. In addition, the eternal spring sun – this is what ideal conditions for a little winter escape look like. 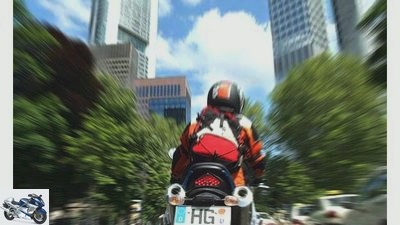 Anyone looking for genuine American feelings in this country will be served most sustainably in Frankfurt am Main. A cruising trip through the urban canyons of the banking metropolis is unparalleled in Germany. For the optimal Mainhatten city tour in the south (Sachsenhausen) get in and stay in the middle via Untermainbrucke and Neue Mainzerstrabe. Turn west at the Eschenheimer Turm to the Alte Oper and board on Mainzer Landstrasse to the trade fair and past the magnificent turn-of-the-century train station back to the Main. Works with and without a Harley, just not in rush hour traffic. 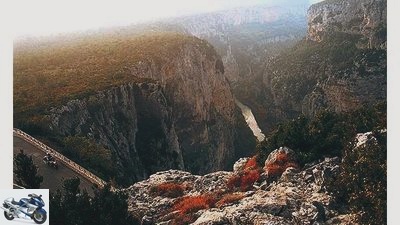 “Corniche Sublime” – please note this name. Because we’re talking about the queen of all panoramic roads, which casually climbs around 80 kilometers along the edge of the Grand Canyon du Verdon – sometimes 700 meters above the river. The most brilliant viewpoints: “Balcons de la Mescla” (250 meters high rock terraces), “Tunnels de Fayet” as “Cirque de Vaumale”, the highest point on the street. Unfortunately there is a lot of hustle and bustle there in summer. Therefore another tip as an alternative: George du Tarn in the Cevennes, which extends south of Sainte Enimie. Despite the unrestrained routing, things are much quieter there. 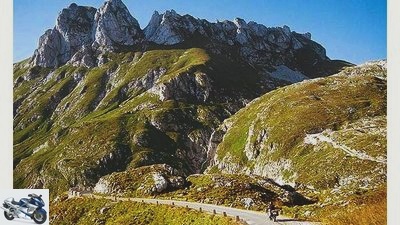 The Mangart driveway in Slovenia – still one of the most attractive routes in the Eastern Alps and, until a few years ago, a paradise for the off-road group. But despite asphalt and tolls, the former military road has lost none of its charm. As before, the end point of the twelve kilometer long driveway: the 2,100 meter high Mangart saddle with a mega view of the gray rocks of the Julian Alps. The Triglav National Park, which spans almost the entire part of the Alps in Slovenia, is already a highly attractive travel destination for motorcyclists. 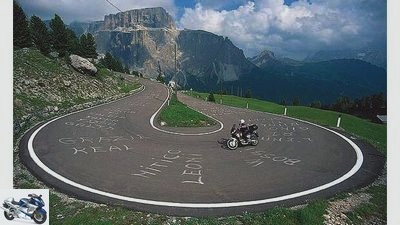 Hardly any other area in the Alps has such bizarre rocks, pinnacles and peaks as the Dolomites. The heart of the region: the imposing Sella Group. An angular fortress made of granite that deserves the name of a work of art. All around, the road builders spat into their hands and carved a magical pass round in the stone that regularly brings tears to the eyes of even the most demanding drivers: Passo Gardena, Passo Pordoi and Passo di Campolongo. The Sella circuit – a total of around 10,000 meters in altitude! – is unreservedly considered to be the greatest jester in the eastern half of the Alps. Basta.

The north German plain does not have the best reputation among motorcyclists. Hardly any curves, no passes. Regardless, because this area attracts with other advantages. For example the route between Grasberg, Worphausen and Worpswede, which leads through the once inaccessible Teufelsmoor. Straight as a bolt, but still a dream. Why? It is the grandiose expanse of the country. And it is these unique avenues. Kilometer long. 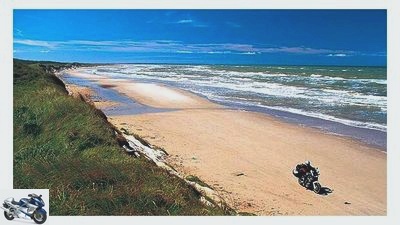 Skiveren Beach is the Nordic answer to Daytona Beach. Except that it’s much more relaxed there. On the one hand the roaring water, on the other meter-high sand dunes and under the profile a surprisingly solid surface to cruise calmly against the wind and enjoy the vastness of the country. Where exactly? The village of Skiveren is located near Hirtshalts in northern Denmark. Anyone who is already here should definitely not miss the neighboring sand dune areas of Rubjerg Knude and Rabjerg Mile – one hundred percent Saharan atmosphere in northern Europe. 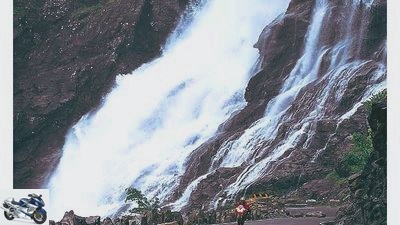 Trollstigen – Geiranger – Dalsnibba: These 100 kilometers are among the most spectacular in Norway. The famous Trollstigen as an aperitif, then steadily downhill through a lonely valley to the Norddalsfjord, where the ferry is waiting. On the other bank, the RV63 winds its way uphill until a viewpoint high above the Geiranger fjord forces you to brake hard. But the highlight is still ahead: the 23-kilometer ensemble of curves up to Dalsnibba. The panoramic view from the 1494 meter high summit of the Geiranger is breathtaking. 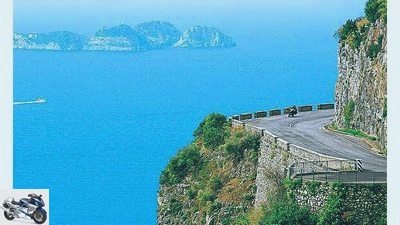 There is certainly no shortage of attractive coastal roads in Italy. But one thing beats them all: that “Amalfitana”, that around 40 kilometers long orgy of curves between Salerno and Positano, which alternately leads along the sea or in the rocks of the Lattari Mountains. Turquoise shimmering water, beautiful bays, terraces with wine and lemons – a landscape couldn’t be more picturesque. The towns, especially Amalfi, are in a class of their own. More Italy? Not possible. Unfortunately, the rest of the world knows that too. Nothing works here in the holiday months or on weekends because coaches are stuck in the convoy. Those in the know come in spring or autumn.

If there were a list of particularly important historical passes – the Col de Turini would be a candidate for the top places. The route in the French Maritime Alps was considered the most spectacular stage of the Monte Carlo Rally for many years. Here – always in the dark – the fight for positions was so intense that only the “Night of long knifes” was talked about. Curve fanatics should only take this climb between St. Martin-Vesubie and Monaco under their wheels during the day. The west ramp of the 1604 meter high pass attracts with 19 tight bends, countless S-curves and what is probably the most grippy asphalt in the entire Alpine region. 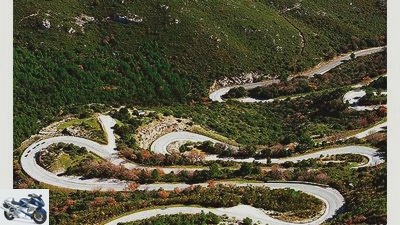 the “only” The 900 meter high Col de l’Espigoulier near the former Paul Ricard GP track east of Marseille is the cornering blast in Provence. Just the sight of the route in the photo should cause a racing heart. And if you are already there, you should definitely turn onto the wild, winding roads around Collobrières in the Moorish Mountains. Or take the crisp Route de Crêtes between Cassis and La Ciotat under the wheels. The best time to do this: autumn and spring. 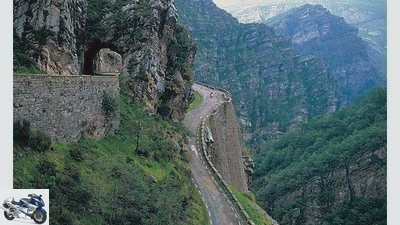 Have you ever heard of Puerto de San Isidro? Probably not, because this pass (large picture) does not wind through the Alps, but through the Cantabrian Cordillera in northwestern Spain – a wild, rugged mountain landscape in the rock bastion “Picos de Europa” peaked between Santander and Oviedo. It’s just a shame that you have to accept an extremely long journey for this great terrain. For this reason, there is another route tip for Spain: The driveway to the monastery of Mare de Deu del Mont in the south of the Pyrenees, which branches off halfway between Figueras and Besalu in a northerly direction. An even more winding path? Difficult to imagine in this part of Europe. In addition, the route rewards at the end with a fantastically located vantage point. The best time to get stranded here: shortly after sunset, when the mountains of the Pyrenees spread out in front of you in a wild, jagged silhouette. 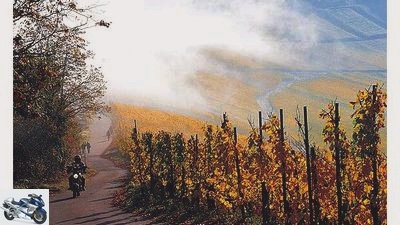 Big cinema – there is no other way to call the late autumn play of colors of nature along the Moselle, when the vineyards and beech forests show off red, yellow and orange fireworks. The best views are between Cochem and Bernkastel-Kues (great old town!). The fortresses Burg Eltz and the Reichsburg (above Cochem) should not be missed either.

Unfortunately, there are no curves and hairpin bends in Bremerhaven. But the city on the North Sea lures with a highly ingenious route through the overseas port: Franziusstrabe. Huge steamers, locks, shipyards and cranes – everything you can touch. An observation tower made of stacked containers offers the best overview. The place for a break: “Meeting point at Kaiserhafen – the last bar before New York”, probably the strangest sailor’s pinball ever. 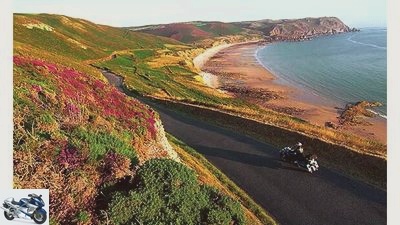 Great beaches, fantastic cliff formations and a coastal road that has what it takes to become a classic: the route along the Baie d‘Ecalgrain on the extreme western tip of the Contentin Peninsula in Normandy. The maritime atmosphere is definitely hard to beat. The way there leads from Le Havre to the sites of the Allied invasion of 1944. Also particularly worth seeing: Honfleur, one of the most beautiful places and berths in Normandy.

Susten, Grimsel and Furka passes – hardly more is possible. 6825 (toll-free!) Vertical meters and what feels like 10,000 curves and hairpin bends around the mighty Dammastock massif and the Rhone glacier. This combination of passes, with its awesome route, offers perfect alpine impressions. 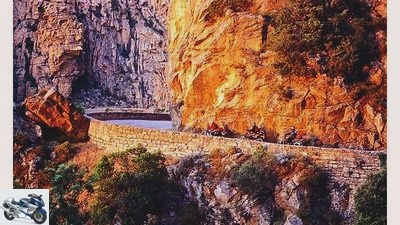 Corsica’s most beautiful route? Not an easy question. The wild west coast route between Calvi and Porto? The magical Bavella Pass in the deep south? Or the circumnavigation of Cap Corse? All driving dreams, but our tip is Les Calanches, a cliff between Porto and Piana, which is only a few kilometers long but glowing in flaming orange in the evening. The coastal road is barely the width of a towel, carved into the rock high above the deep blue sea. Mega beautiful and sundowner scenario every evening. Except for the moment when a crazy coach driver comes on the same trip. Then there is an apocalyptic mood in Corsica’s midwest. 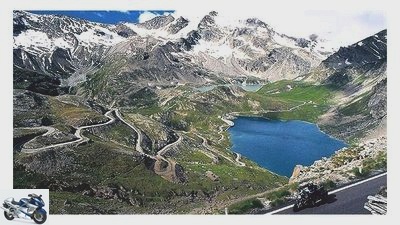 South of the Gran Paradiso (4061 meters), the road construction workers blasted a route into the rock that would certainly be as overcrowded as the Stilfser Joch if it did not end as a dead end: The Colle del Nivolet leads so daringly up to a height of 2612 meters that you ask yourself upstairs where you have been wasting your time so far. The fact that you have to go back the same way – the asphalt ends at the border to the Gran Paradiso National Park – is really not a disadvantage. the “Downhill perspectives” Even experienced alpinists can knock off the saddle on the dark blue Lago Agnel and the jade green Lago Serrù. The pass is accessed via Ivrea on the A5 between Aosta and Turin.