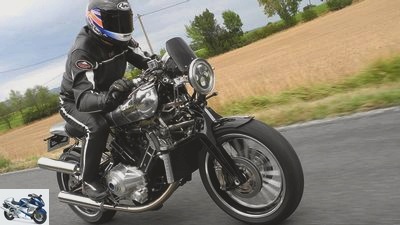 A legend has resurrected: the famous Brough Superior S.S.100. Stylistically based on the model from the 1920s, the modern Brough also has extraordinary technology.

MOTORRAD employee Alan Cathcart was able to drive the 1000cc V-Twin as a world exclusive.

They were called the “Rolls-Royce of Motorcycles”, they were the first superbikes: It was not for nothing that company founder George Brough added the addition Superior, his machines should be superior to all others. Only about 3000 copies were made in Nottingham between 1919 and 1940 in a relatively short period between the world wars. Many Brough models broke speed records and drove race victories. Dazzling personalities like Lawrence of Arabia, who ordered a total of seven new machines, increased the fame. Today the around 1000 remaining oldtimers are coveted and accordingly dearly traded rarities, attractions at auctions and in museums.

The S.S.100 was the most famous Brough model, the abbreviation stood for Super Sports even back then. The Brough was powered by JAP engines with one liter displacement, which at the end of their development had an output of up to 74 hp. Every single vehicle was sold with a certificate that it could break the 100 mph sound barrier (161 km / h), from 1934 even 110 mph were guaranteed. Of 283 S.S.100 built, 131 are supposedly still preserved today.

But with the Second World War the end of production came. And after the war there were simply no more suitable engine suppliers, and there was no demand for such exclusives. George Brough manufactured precision parts for the aviation industry in his company until his death in 1970. Incidentally, ironically, also for Rolls-Royce, with which his motorcycles have so often been compared.

In 2008, the Englishman and veteran specialist Mark Upham, who lives in Austria, acquired the naming rights and initially built replicas of the old Brough models. Alan Cathcart, author of this story, brought him together with the French Thierry Henriette, head of Boxer Design in Toulouse. Together the two developed the idea of ​​a modern brough interpretation.

The modern one-liter engine with an 88 degree cylinder angle is manufactured by Akira Engineering in Bayonne, France. In 2013 the first prototype was presented at the EICMA in Milan (see MOTORRAD 1/2014). When the first ten models are produced by the end of this year, engine production is to be relocated to Boxer Design. 125 machines are planned for the coming year and 250 machines in 2017. As in the past, each Brough will be a one-off piece that will be built individually according to customer requirements.

The S.S.100 looks elegant and slim, with its extraordinary design and interesting technical solutions. The first thing that catches the eye is the complex front suspension with double wishbones and powerful wheel carriers. It is similar to the BMW Duolever, but was invented by Frenchman Claude Fior, who competed in the endurance world championship with it in the 80s and later built some machines for boxer design. Unfortunately, Fior had failed to get a patent for this construction. The eye-catching four-disc brake, like many titanium parts – such as the frame and wishbones – contribute to the low total weight of 186 kilograms (dry).

So there is a lot of French influence, but the weather at the drive to the plant in Toulouse is English: It is pouring rain. Thank goodness not non-stop, so that short driving impressions on dry roads are possible in between.

In contrast to modern machines, the Brough is extremely slim; it offers the driver a lot of space thanks to the low footrests and the long tank. However, the seat height of 830 mm, which is not least due to the traditional 18-inch tires, is quite high for a 1.80-meter test driver. Henriette would like to cut around 25 mm here in the series.

Anyone who has finally outsmarted the fiddly starter button will hear a muffled, not particularly voluminous sound from the two silencers. Therefore, the mechanics are clearly audible, the rattling and clattering is perhaps a little reminiscent of the JAP bumper motor of the historical model.

Nowadays, when 200 HP is nothing special, a good 130 HP certainly doesn’t knock anyone off their feet. But the modern Brough is not built to break speed records, but to provide driving fun on the country road. If you want to enjoy the maximum driving dynamics, you have to keep the dohc four-valve engine over 5500 revolutions and stir accordingly in the six-speed gearbox. That shifts exactly and easily while driving, only the idling can hardly be found when stationary.

The engine hangs predictably and smoothly on the gas, which certainly speaks for a successful set-up, but is partly due to the indirect translation between the throttle grip and throttle valve. If you want full throttle, you have to crank vigorously. A short-stroke throttle will be tested soon.

The water cooling is a necessary concession to modern emission hurdles, even if Mark Upham initially dreamed of a filigree air-cooled engine. But he would have no chance of survival today, at least not with this level of performance. A good comparison is provided by the air-cooled, around 90 hp, 1000 Desmodue Twin from Ducati, which incidentally had an almost identical stroke-bore ratio. But that too is history.

The “non-round” cylinder angle of the brough of 88 degrees is due to the fact that 30 millimeters can be saved compared to the right-angled arrangement between the heads, but good mass balancing is still possible without a balance shaft.

While the engine appears quite conventional in a positive sense, the driving behavior is incomparable. From the driver’s point of view, it starts with the dancing up and down lamp mask, which, along with the lamp, does not hang on the spring-loaded parts as usual, but on the unsprung wheel carrier. It is an interesting spectacle how every bump in the ground becomes visible to the driver. Both wheel suspensions work with fully adjustable and perfectly matched Ohlins shock absorbers. As with the BMW counterparts, the geometry of the Fior front suspension results in an anti-dive effect, so that the suspension works well on the brakes and the front is kept stable at the top.

The Brough initially got large and narrow tires for aesthetic reasons. Ultra-wide 17-inchers would have made a completely different visual impression, the 18-inchers go well with the filigree, slim appearance of the S.S.100 and the retro look. Therefore, the choice fell on the graceful multi-spoke wheels, which are supposed to be reminiscent of classic wire spokes.

The four-disc brake at the front also looks quite unusual. It is a development by the French specialist Beringer. The four smaller 230 mm discs should be a little lighter than two large 320 mm discs, but above all generate considerably smaller gyro torques and thus less influence on the steering behavior. That may well be the case, because the S.S.100 drives extremely light-footed in bends and steers effortlessly. The Beringer system works with a saddle on each side which, by means of an additional middle covering, comprises two discs. The manual force for strong deceleration is relatively low, the braking effect as well as the controllability in the limit range is excellent. No ABS is currently available. However, this has to be developed very quickly, because it will be mandatory for new registrations as early as 2017.

So there is still a lot to be done, but everything is going according to plan at the moment. Experience is available, Boxer Design built the VB1 Superbike a good ten years ago, but production had to be discontinued after 36 units because the engine supplier Voxan went bankrupt. That shouldn’t happen a second time, which is why one wants to become independent from suppliers. An S.S.100 should cost from 50,000 euros, Brough motorcycles have always been characterized by exclusivity. Today it is based on the same idea: to build motorcycles that set standards in terms of quality, perfection and precision. And in the medium term, Mark Upham wants to bring the Brough brand back to Nottingham.