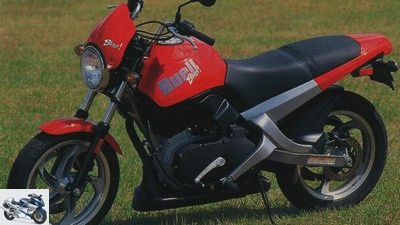 With just one cylinder and a price of $ 4,395, the Buell Blast is half the battle when entering the world of the big V2 from Milwaukee.

The gust of wind, so the translation of Blast, should set the fire on beginners for the two-wheeler in general as well as for a bike of the brand Buell in particular, and at the same time lay the foundation for the later switch to a two-cylinder from Harley-Davidson or Buell. The marketing strategists have come up with a clever trick for this: If the Blast customer decides after a year for a Harley-Davidson or Buell two-cylinder, the Blast will be traded in at a new price of 4395 dollars. For the fact that the single cylinder is primarily intended as a stepping stone to the large V-twin cylinders, the 100 percent Harley offshoot Buell went to great lengths. Even if some parts come from the Harley-Davidson shelf, it is a completely new design. With the 500 cm3 single cylinder bumper, the Blast ranks below the existing model range in order to requisition beginners who are looking for a means of transport or leisure equipment.

The preferred target group is the female gender, for whom Harley President Jeff Bleustein wants to offer a light, inexpensive single instead of the big V2. In fact, the new Buell turned out to be extremely compact. When it comes to the chassis, the unusual 16-inch wheels are particularly noticeable and contribute to the low seat height of just 70 centimeters. This can even be reduced by another five centimeters; Buell has another bench available for an extra charge. The comfortable upholstery of the standard bench supports the comfortable seating position. The high handlebars and the footrests positioned far forward ensure an extremely relaxed, upright posture. After pressing the starter button, the engine goes into increased idle speed. An automatic cold start enrichment on the 40 mm Keihin carburetor replaces the manual choke. Hearty vibrations then massage the driver’s seat and feet. The engagement of the first gear is accompanied by a rich clone. Only once in motion, the single loses its gruff expressions of life as the engine speed increases and runs in higher ranges – unfortunately there is no tachometer – almost as cultivated as the large V-twin with balancer shaft. The Showa fork and the suspension strut hinged directly to the swing arm also ensure well-groomed manners. Thanks to its responsive spring elements, the Blast hovers comfortably over even the worst of roads. The single cylinder feels most comfortable at a speed of around 100 km / h. In the upper speed range, however, the engine works hard. The two-valve single-cylinder with dry sump lubrication should produce 34 hp at 6500 rpm and 41 Newton meters at 5800 rpm. The valve train with hydraulic valve lifters, bumpers and rocker arms is based on the engine of the 1200 Sportster. Harley-Davidson attaches great importance to the fact that it is not an amputated V2, even if the processing takes place on the production lines of the large engines. With a diameter of 88.8 millimeters, the bore corresponds to the 1200 Sportster engine, but the similarities end at the 79.4 millimeter stroke. Instead of a balancer shaft, the elastic mounting of the engine largely protects the driver from annoying vibrations. The power is transmitted via a five-speed gearbox via a toothed belt to the rear wheel, which should get by for 25,000 kilometers without retensioning. A type of rear-wheel drive that is sure to suit beginners. No annoying chain tensioning and lubrication.

In the past, Harley left motorcycle novices to the Japanese without a fight. Obviously, the marketing experts have now recognized the effect of brand loyalty when they entered the motorcycle world. In order to avoid problems with the association of the plastic-coated blast with the brand identity of Harley-Davidson, the single operates under the Buell logo. With its cost price of almost 9,000 marks, the Blast can compete with Japanese entry-level machines such as a Suzuki GS 500 E or Kawasaki ER-5, but technically it has significantly less to offer. In terms of driving behavior, the Blast delivers a convincing performance. Completely effortlessly, it reacts to the slightest steering impulses from the driver, is extremely maneuverable when cornering and changes lean angles are almost playful. That’s why she feels in her element even in city traffic. Only the loud changes in the two lower courses are then annoying.

Due to its easy handling and the low seat height, the American single-cylinder is indeed recommended for children on the road. The fact that the motor does not tend to explode in performance – another translation of Blast – is more convenient for beginners. With her good manners, she rakes in half the battle and should persuade many customers to switch to a two-cylinder from Buell or Harley. Which works out not only for the customer, but above all for Buell and Harley-Davidson. According to the importer, interested German buyers will wait in vain for the blast, unless it exceeds all sales forecasts in the USA.