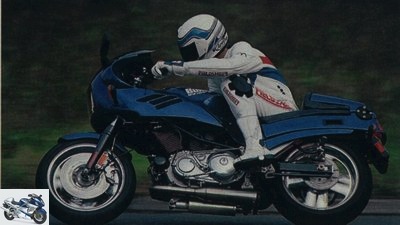 Harley-Davidson – it’s as American as the hamburger or the stars and stripes. And like Erik Buell: Because Erik Buell builds America’s only, true and real sports motorcycle – on a Harley-Davidson basis. That is, there are now two.

After Buell’s first model – that of one Harley-Davidson XR 1000 Flat Trak engine powered RR 1000 from 1987, from which the RR 1200 with Evolution Sportster engine became – now follows the RS 1200. The RR 1000 and RR 1200 suffered from one problem: You could not see from the outside that they were Harley-Davidson engines were hidden under the completely closed fairing of the two single-seater athletes. Therefore, and in order to add a two-seater touring sports model to the one-seater extreme version, Buell created the two-seater RS ​​1200, which is now only half-clad.

Erik Buell worked for Harley-Davidson for many years. Thanks to his good relationship with the factory, he is the only one who receives factory-fresh, standard 1200 Evolution Sportster engines and, with the blessing of Harley-Davidsons, is allowed to install them in their tubular chassis.

The workmanship of the RS 1200 is good. The production of the fairing parts is of the same high quality as the fine mesh tube, which with its own Buell engine mount, the strut underneath the engine and the intertwined Supertrapp exhaust system can finally be seen just as well as the engine.

The seating position on the RS is a little more upright and far more comfortable than on the RR, which forces the rider into an extreme crouching position and does not suit everyone by far. The speedometer and tachometer are original Harley-Davidson. The starting procedure is also typical Harley. The ignition lock is to the right of the tank and the choke is to the left in the angle of the cylinder. Pressing the starter button on the standard Harley fittings brings the mighty V2 rumbling into life.

At low speeds it shakes itself in its suspensions to become more and more calm with increasing revs, which is atypical for Harley. At the same time, it practically delivers enormous power from idling speed, almost a straight line in the diagram.

Despite the enormously long engine, the RS 1200 is a fairly short motorcycle with a 1410 millimeter wheelbase. Nevertheless, it feels like a significantly larger motorcycle compared to the extremely low-profile series Sportster. Due to the low center of gravity and the steering geometry designed for maneuverability – the steering head angle is 65 degrees and the caster just 91 millimeters – it is very easy to handle and agile. With one exception: the tight steering angle can quickly become a problem at low speeds.

At country road speeds, however, this difficulty is soon forgotten, and the engine, which takes a deep breath, drives the RS 1200 forward very emphatically. The wind protection behind the high-arched window proves to be quite good, as soon as you make yourself small behind it, even excellent. On the autobahn, however, it is over at around 190 km / h. The pushrod engine, equipped with just a 40 millimeter Keihin carburetor, is given an optimistic 70 hp maximum output. But with that 200 km / h should be possible. Around 60 hp, on the other hand, are far more realistic. After all, a whole branch of industry lives from the production of tuning parts for Harleys.

On the other hand, the cornering speeds can be very high as standard, because the Buell chassis works excellently. The meshwork of the trellis should include the engine as a load-bearing element, although it is mounted in vibration-reducing silentblocs. Similar to the Norton Isolastic suspension system of the 750 and 850 Commando engines, the engine and frame are made of rubber elements and – in contrast to the Norton system – four short ones that are installed across the direction of travel. Push rods with ball heads screwed together. The motor can swing back and forth, up and down and vibrate without passing this on to the frame.

The fork is a Marzocchi-M 1 R with 41.7-millimeter pole tubes and works quite well. Erik Buell has also installed an electrically operated Anti Dive: solenoid valves operated via a switch on the handbrake lever reduce the air volume in the fork legs when braking and thus increase the spring rate during compression due to the brakes. The spring rate of the rear shock absorber is quite high, but still acceptable. However, the damping of the mono-spring strut, which is located under the engine and operated via two tie rods, is far too weak. The stern swings violently at the slightest stimulus. But since nothing else can be regulated apart from the spring base adjustment, the only remedy is to look for a better functioning spring strut on the market. This is all the more sad as the very first Buell RR 1100 suffered from the same spring struts, which were completely underdamped in the rebound stage. Apart from this weak point, the RS 1200 is remembered as a very handy, stable and active motorcycle.

The fact that the RS 1200 runs on 17-inch wheels at the front and rear also contributes to this. And in order to give the impression of a modern motorcycle in terms of chassis, the two floating 310-millimeter brake discs with four-piston brake calipers in the front wheel do their job very effectively. With a full tank of only 210 kilograms of vehicle weight, this is hardly surprising.

A special gimmick is hidden in the hump on the pillion seat: the cover is not removed for two-man operation, but simply folded back and functions as a backrest for the passenger – a kind of sissy bar for street athletes. So Erik Buell couldn’t quite forget his roots after all. Whether the “Screaming Eagle” is emblazoned on the cushion of the hump?