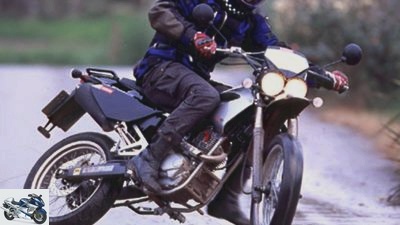 Senda comes from Spanish and means way or path. Can the new Derbi models show the mainly young target group the way?

The northern Spanish manufacturer Derbi took over four high-ranking positions within less than a year
Aprilia Manager. You are supposed to
Strengthen and expand the market position of the traditional company and lead the group into a secure future.
First decision of the new top management: The internationally important 125cc segment is to be expanded. So far, the Spaniards have only offered one scooter there. Too little to inspire sporty youngsters. New had to come? real small motorcycles with manual transmission. But Derbi does not have its own unit in this area. To save time and money, the developers went shopping at Honda. They acquired a 125cc engine that had debuted in the late seventies. So old material? Not at all. The single cylinder is also proving its worth in Hondas
XR 125 L, bubbles in accordance with Euro 2 standards and is considered to be very reliable. Another one
Argument in favor of the Japanese drive: With the development costs saved, Derbi, as the largest European manufacturer of mopeds and light motorcycles, will ensure that its vehicles will continue to have a good price-performance ratio in the future. 3295 euros for the new Enduro and 3345 for the street model are perfectly fine.
And what about the performance? To find out, followed
MOTORRAD an invitation from Derbi to test drive the new Senda versions, R 125 4T and SM 125 4T. The abbreviation »R« stands for Enduro, »SM« for Supermoto. They initially differ in the size of their wheels and theirs
Tire. In addition, the Supermoto version got a larger brake disc and the front fenders are shaped differently. Everything else is the same.
This also applies to the engine. With its twelve horsepower, the two-valve engine doesn’t tear tracks deep into the ground, nor does it set the asphalt on fire. Nevertheless, the brave machine makes it, both off-road and on-road the comfortable ones
Drive Sendas nicely. Nice because
for example the 125cc MZ engine
gets to the point more lively. But good. The Senda digs in easy terrain
R bravely and, thanks to her good-natured character, ensures steady propulsion. The four-stroke engine looks a bit tougher on the road. No wonder, because the low power output is naturally more noticeable on a well-developed surface. After all, the “SM” climbs up to 95 km / h according to the speedometer and holds it reliably.
The spring elements are pleasing. Not too softly laid out, make sure you do
on firm ground for a good roadholding and a direct driving experience. In the field, the »R« impresses with an acceptable level
Responsiveness of the fork and shock absorber, which only reach their limits when accelerated. They hit
relatively late.
The performance of the brakes, on the other hand, was not entirely convincing, neither with the large nor with the
small brake disc. This is of no consequence off-road, as the wheels lock up faster on loose surfaces. On the street you have to pull the lever really hard to catch the two Sendas. Despite the high hand strength, the stoppers feel toothless.
The two Derbi can reconcile through their handling. Easily, Enduro and Supermoto follow orders
of the driver, who thanks to the wide handlebar keeps it under control. Even in the most angular terrain you can think of
can imagine.
Both versions will be on sale in Germany from the end of December.

Klaus Nennewitz, 37, Product Manager at Derbi, about the parent company
Piaggio and the future of the Spaniards.

Mr. Nennewitz, Derbi is part of the Piaggio Group. To what extent do the two companies work together? Piaggio leaves us almost completely free. We can also fall back on their know-how in engine development. What will the Derbi product range look like in the future? We want to position ourselves more broadly. In the past, Derbi built almost exclusively small two-stroke engines. We want to change that. The Senda four-stroke engines are the beginning of this new path. Are there also plans for larger-displacement models? We can well imagine offering models with a little more displacement in the future. Derbi is able to react very quickly. We believe that a successful mix of Streetfighter, Enduro and Supermoto could enrich the market. Derbi also has a great off-road tradition. I can’t tell you more at this point.