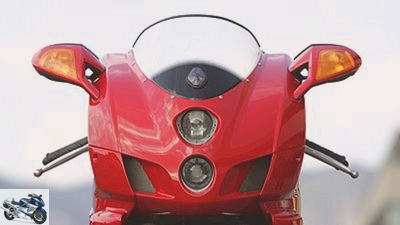 The Ducati 999 has so far not been spoiled by sales success, mainly because of its controversial design. A fairing with a new face, but also a new swing arm and a more powerful engine should change that.

The speed increases by leaps and bounds in the third, with a click. 10600 revolutions, fourth gear, fifth. Beyond the 240, the Duc is still relentlessly gaining ground. Despite strong headwinds. Sixth gear, the crest, 262, 263, the front wheel becomes light. A short stretch downhill, for a hundredth of a second, the driver sees the 270, then only the fat, rubberized braking zone, makes sure that he decelerates with everything that the vicious brembos give and finds in the bend. The humming of the engine after the last downshift sounds like a relieved exhalation.
270 things on the home straight at Mugello are a great achievement for a production motorcycle in headwinds. Can only be achieved with good aerodynamics and plenty of steam in the engine. And that’s exactly where the engineers from Ducati when revising the 999. Widened the upper part of the fairing, chose a more curved pane and thus ensured that the driver could at least fit behind the red dome in a lying position. As a welcome side effect, the mirrors moved further apart, now and then you can actually see something in them
see. And of course Ducati wants with the redesigned front? noticeable are the modified air inlets ?? also the controversial design of the 999 something
make it more pleasing. The icon 916/996/998 is still clearly visible to many, which stimulates mocking comparisons.
The qualities of the Testastretta engine have always been undisputed. In its latest evolutionary stage, it has added 16 hp, and is supposed to produce 140 hp in a legal version. That is even three horsepower more than the 2004 S and R engines. The power boost was made possible by new camshafts that provide more valve lift and longer valve opening angles. The compression increased to 11.4
to one. The gain in power in the upper half of the speed range has to be paid for by a small loss of torque in the region of 5000 revolutions. It did not turn into a real break-in; even in the upper gears the engine turns over it without getting stuck. Performance characteristics and running smoothness of the
Testastretta remain at the highest level, the load changes in the corners were hardly noticeable. To what extent the draft is impaired, however, can only show an exact measurement.
In addition, the standard engine was given the housing with the funnel-shaped tapered oil pan, which was previously reserved for the S-engines. The position of the suction bell in the deepest area of ​​the funnel ensures reliable lubrication even at full acceleration, when braking hard or when driving a wheelie.
Only the swing arm on the chassis is new; it was adopted by the two most expensive Ducatis, the 999 R and the 749 R. Although it is supposed to be significantly stiffer than the cast swingarm of the previous 999 with a slightly lower weight, one can assume that it was chosen mainly because of its better appearance. Because the old 999 did not have any stability problems either. But well, the swing arm contributes to a higher quality impression, as do the welded seams on the
Frames that are more carefully executed
than in the first series. At least with the
22 machines that could be seen at the presentation.
In view of the proven chassis, it is not surprising that the 999 on
plays a good match on Mugello’s selective GP course. First of all with the
Standard tires Michelin Pilot Power and
despite the inevitable 190 rear tire that ?? it was written for the thousandth time ?? really doesn’t work optimally on the 5.5-inch rim. Nevertheless, full grip, high straight-line stability and
create good comfort on the slope garnished with pronounced bumps
Trust. The lean changes in the wide curved chicanes work smoothly, only when accelerating does the Ducati pull into the wide line.
But this is only really noticeable when the mechanics have put each machine on the Michelin Pilot Race in M2 mix. A 180 was even chosen at the back. One of the qualities of such racing tires is that they not only offer more grip on the slopes with the right chassis and in the right temperature range, but also convey a much better feeling for the motorcycle, easier handling and guarantee impressive steering precision even when accelerating or braking wildly . The 999, set up relatively comfortably by MotoGP test driver Vittoriano Guareschi, has increased from a good to a grandiose performance. Climbs through the chicanes, darts elegantly down the terrifying downhill section and finds its way through the two “Arrabiata” uphill bends, where it is constantly accelerating beyond the 150 in full incline over rough bumps. In short, the 999 was a strong reminder of what it still is despite the hyper-powerful 1000s from Japan and despite all the mockery of its appearance: a perfect race track motorcycle.