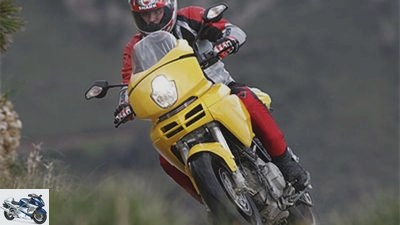 As inexpressible as the pizza is presented, which wants to offer something to everyone, Ducati wants to adapt the small 620 Multistrada to different road conditions. Buon appetito!

The ingredients were fresh. With the Multistrada 1000 continued Ducati two years ago finally switched to healthy mixed food. Bittersweet and still digestible? for new customers. Those who want to live upright and like to be with you as a couple
Luggage. Whose mouths water even on rough roads, if only they are twisted enough. So far, the Bolognese kitchen has served a multistrada to around 7,000 guests. Now it is also available as a smaller portion
for 8,645 euros, a whopping 2900 euros cheaper.
Based on the tried and tested modular principle, Ducati is adding a 620 variation.
For passes and country roads, urban gorges and dirt roads. In two new lacquer inserts, bright yellow and mandarin orange, as well as Ducati red and black like the 1000. Of
that’s where the basic recipe comes from. So you take: a cladding with bulbous curves on beads and edges? Antipasti from Ducati’s design chef Terblanche, seasoned with Cyclops headlights. A projection lens for the low beam, including high beam in a multi-reflector jacket. There is also an upper part of the fairing that swivels, and is mounted on the handlebar like the instruments. Looks like a carving knife went through the plastic bell.
From now on, all Multistrada will be served with a curved, five centimeter higher disc. The windshield is perfect, the hull is effectively shielded without turbulence or high volume. As a garnish there is, as usual, mirrors with integrated turn signals, the arms of which are four centimeters longer to enhance visibility. At the rear, two huge tailpipes of the silencer placed under the pillion seat peek out. The seat support and the tank, which only holds 15 liters, form a 1.10 meter
long unit. The almost straight driver’s seat with a tenderly indicated seat recess is narrow at the front and very wide at the rear. And long. Therefore you can adopt a touristy or combative attitude with a lot of feeling for the front wheel, depending on your taste.
Compared to the 1000, the front and rear suspension travel and thus the seat height have been cut by 20 millimeters. Better traction, finally,
the newly designed, stable pages-
stand of both models. The Mini-Multi should weigh 13 kilograms less, that would be
207 kilograms with a full tank. Light fare: The flea hopper is as easy to maneuver as it is to drive. The wide and high handlebars ensure good control even in difficult situations. For example with light off-road inserts on the way to the sea. Light weight and fashion-
rate seat height make the 620 easy to control in the sand.
The Pirelli only stick to asphalt-
Diablo tires full. And it’s great, as a full-fledged touring sport tire. They predictably announce the limit area. The delicious German gums create a lot of trust in the Sicilian rain. A narrow 160/60 rotates at the rear in the simple steel box rocker to facilitate handling. For comparison: The 1000 is a wide 180 with a noble single-sided swing arm, namely a Pirelli Scorpion Sync developed especially for the Multistrada at the time. At the front, Ducati relies on an unconventional 60s cross-section for the 620. This means that the small Multistrada is very agile around the corner.
The air-cooled Desmo-V2 bravely struggles to satisfy forward hunger, turns and pushes. When fully squeezed, there are 63 hp at 9500 tours. It’s not underpowered. In MOTORRAD 13/2004, the 618 cm3 engine in the Monster turned out to be the best European entry-level engine. Yummy. Has character
he, the only Ducati “L” without oil or
Water cooler. Fine the sound, robust
V2 staccato, the dressing is throaty
Suction snorkeling. In order to quickly drive the digital speedometer over 180, you have to savor every single stage of the perfectly shiftable six-speed gearbox down to the last bit of speed.
For a smooth run, especially in the sixth, there should be over 4000 tours. Between 3000 and 4000 rpm, the instruments and the upper part of the fairing shake like crazy when you apply the gas. The »APTC clutch« requires little manual force thanks to the servo effect, but it is difficult to dose. In terms of brakes, home-style cooking is served, double-piston floating calipers bite on 300 mm discs. Typically Ducati operated via steel braided lines, but unusually with a muddy pressure point. The pliers in the rear can be dosed nicely.
The chassis cuts a fine figure not only on gourmet asphalt. The non-adjustable 43 mm upside-down fork from Marzocchi is quite sensitive for Ducati conditions. Quite al dente, the damping is tight, the springs
rather soft. According to the brand, the shock absorber is operated via a rocker and
works inconspicuously. The adjusting screw for the rebound stage damping is easily accessible, but unfortunately the rear suspension is
At the mercy of dirt attacks, defenseless. One
Cover is only available as an accessory.
Ducati recommends good for dessert
Integrated 34 liter suitcase with lacquered lids, plus a main stand, heated grips and a Bolognese navigation system-
nese enough. The standard immobilizer is on the house. If you are on a diet, you should order the matt black dark version. It has a single disc brake at the front, at least a Brembo four-piston caliper with a 320 disc, and costs
600 euros less. Pasta, uh, that’s it.