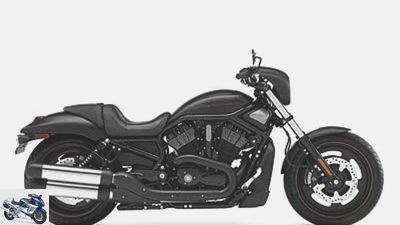 Harley-Davidson is retiring the Twin Cam 88. In 2007 the Americans ignited a new evolutionary stage of the original 45-degree engine, the Twin Cam 96. It powers all Dynas, Softails and Touring models. With more displacement, more pressure and a much better sound.

As in the new Softail Custom.

In 2007, all Dynas, Softails and Touring models received the »Twin Cam 96« -V2 with 1584 cc. New pistons, which should be ten percent lighter including bolts, now cover a stroke of 111.1 instead of 101.6 millimeters. The bore remained unchanged at 95.3 millimeters. The compression of the unit with an even longer stroke increased from 8.9 to 9.2 to one. New camshafts should be more durable and run more quietly thanks to new drive chains and roller bearings. They also have changed inlet valve timing. The torque grew over the entire speed range. Maximum values: 122.6 Newton meters at 3000 rpm in the Dyna series (plus 17 percent), 117 Nm for the Softails (plus
15 percent) and 122.3 Nm in the touring family (plus 13 percent). Despite lambda sensors in both manifolds, Harley-Davidson speaks of “uncontrolled catalytic converters”: the new ignition / injection software is designed for efficient engine operation, not for the lowest possible emissions. Nevertheless, the air-cooled Big Twins now just about meet the Euro 3 emissions standard.
The “active inlet and outlet system” works with flaps in the exhaust and intake tract, which connect or disconnect additional volume depending on the specifications of the electronic engine control and the position of the throttle valve sensor. With certain combinations of engine speed and throttle valve position, the valves close to reduce intake volume and exhaust noise. This minimizes driving noise at low speeds, for example in city traffic. On the other hand, on the country road, the valves open to »maximize the power output and optimize the sound«. The transmission now has six claw-shift gears after the Dynas were test vehicles this year. The “Cruise Drive” christened cassette gearbox with helical gear wheels can be removed without dismantling the engine, is supposed to be quieter and offer greater shift comfort. The gear ratios are the same in all models: the sixth gear lowers the engine speed and saves fuel, 11.4 percent longer than the previous fifth. At 120 km / h there are only 2860 instead of 3230 tours.
The power connection to the rear wheel is provided by the toothed belt narrowed to an inch (2.54 centimeters), which is said to be 30 percent more durable thanks to new carbon fibers. A new pull reduces the manual force required on the clutch by seven percent; softer compression springs and a progressive deflection were already introduced this season. Because of this, the manual clutch force dropped by a total of 40 percent from model year 2005 to 2007.
There is now an automatic timing chain tensioner on the duplex chain in the primary drive, and the service flap in the primary box cover has disappeared. The lubrication system has been modified and the oil pump more powerful. Innovative: The electronic immobilizer is activated automatically as soon as the key leaves a radius of around five meters around the motorcycle.

There is also news in 2007 in the liquid-cooled V-Rod family. The V-Rod, Street Rod and Night Rod are joined by the Night Rod Special (VRSCDX) and the VRSCX. What they all have in common: the pillion footpegs, which are now fixed to the frame, but are mounted quite high. Or the fully automatic, radio-activated immobilizer. In favor of a practical range, Harley donated the entire V-Rod family a significantly more voluminous, 18.9 liter tank.
And for friends of a martial appearance the Night Rod Special. Because Black is known to be beautiful, this muscle bike comes completely black, including a 121 hp engine, frame and swing arm. Only the brake discs, brake pedal and hand lever and the fork tubes still have a metallic sheen. The solid black disc wheels with orange rim rings match. The beefy appearance is topped by the cannon barrel-like black silencers with aluminum covers,
called by Harley “straight-shot dual exhaust”. The 240 mm rear roller ensures a strong finish on the drag bike, which costs € 18,345. Shorter struts and a newly contoured cushion lower the seat height of the Special to 640 millimeters.
Technically more spectacular is the VRSCX, which is limited to 400 copies for Europe. Here the “Revolution Engine” was drilled out from 1130 cm3 to 1250 cm3 using the “Screaming Eagle Big Bore Kit”. This should result in 125 horses and 116 Newton meters of torque. Visually, the “nameless” creation, for which no price has yet been set, is based on the Dragster Destroyer Cup (see a report on this in the next issue of MOTORRAD). The 19-inch wire-spoke wheel at the front appears filigree. At the rear, an 18-inch disc wheel made of light metal rotates, on which, as with the Night Rod Special, a 240 mm silt is drawn
is. Another common feature of both new models: the straight drag bar handlebar. Further information at www.harley-davidson.de.