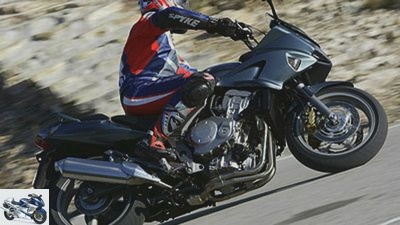 Germany has been waiting for him. Honda’s new all-rounder CBF 1000 is one of the top candidates for the motorcycle sales charts in 2006. One that keeps its promises.

The CBF 600 was Germany’s best-selling Honda last year with around 5000 machines. There is no risk that the 1000s sold will now be at the expense of the 600s?
When designing the CBF 1000, we mainly focused on the wishes of mid-range motorcyclists who are now looking for something stronger. Because of the large difference in performance, the CBF 1000 will not have too much of an impact on sales of the CBF 600 in Germany.
With the Bandit 1200 S, Suzuki in particular will not leave this attractive market segment to Honda without a fight. The Bandit will oppose the CBF with more displacement and most likely a much cheaper price. What speaks for the Honda?
German customers reward the best possible price-performance ratio. That is why you will definitely prefer our service package, consisting of our modern and powerful engine, our advanced braking systems and the individual adjustment options, over an outdated design.
The CBF 1000 is specially designed for the German market. What is the difference between Germans and the rest of the world??
Since motorcyclists on Germany’s autobahns can largely enjoy driving without speed limits, they have unique requirements for high engine performance and wind protection. In addition, aspects relevant to the environment and safety are of comparatively high relevance.