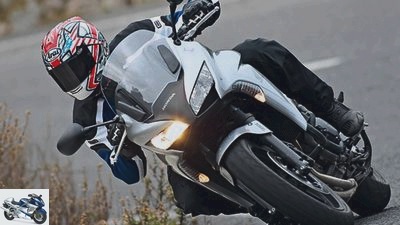 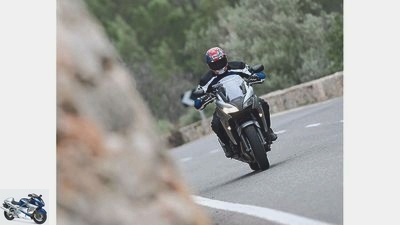 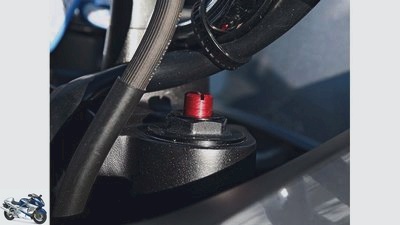 2/10
Now adjustable: the spring preload of the fork. 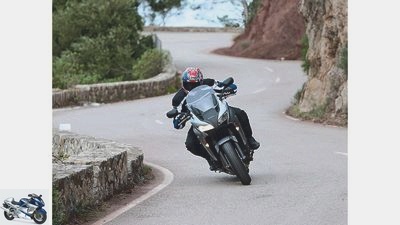 3/10
In contrast to its predecessor, the 1000 F is much easier to adapt to any surface. 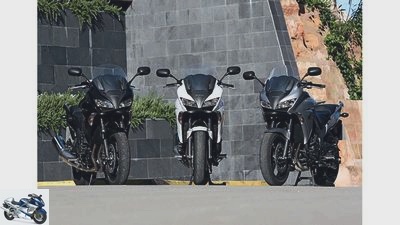 4/10
Mostly muted: Honda does not experiment with the colors. Deep black, silver gray and white are available. 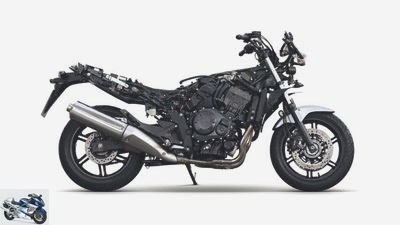 5/10
Now made of aluminum: Frame of the CBF 1000 F, which does not differ significantly in the basic layout from the steel part of the standard CBF. 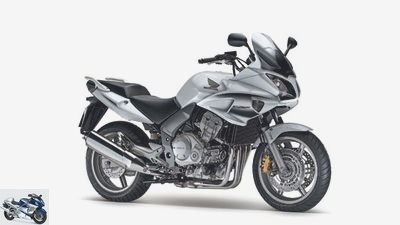 6/10
In contrast to the CBF 1000 shown here, the 1000 F has a single instead of a double silencer and a few more horsepower on the clock. 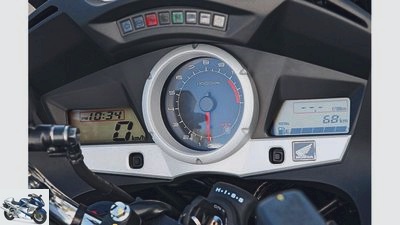 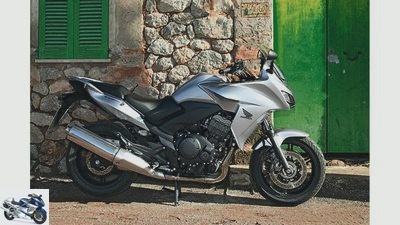 8/10
Redesigned fairing with pulled down side panels and CBR 600 RR headlights. 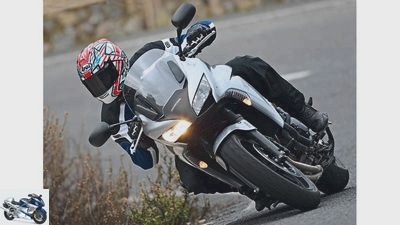 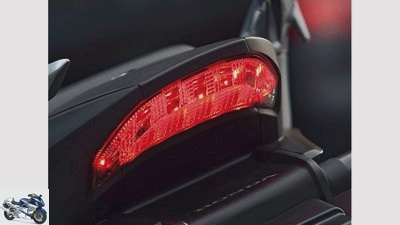 Honda has found that CBF drivers and those who want to become one also appreciate a little more sportiness. And developed a corresponding plan. The new Honda CBF 1000 F in the driving report.

Sapperlot, things can be confusing. The big F behind the displacement designation: Insider brought the English word with it “Fairing” (Cladding) in connection. And thought they were well informed. So far this has also been the case. With the new CBF 1000 F, however, things get complicated. But not because she didn’t have a disguise. It’s undoubtedly there, and it’s actually pretty quick. Rather, it is confusing that the previous CBF 1000 also has one. Also a half shell, also an all-rounder of the best shot and grain, with not significantly different key data. But without the additional F.

And – now it’s getting really thick – the CBF without F is still in the range. We summarize: Two CBF 1000, one with and one without an additional F Both very similar, both with disguise? Where is the plan??

You already notice that there is a lot to clear up on the winding streets in the north of Mallorca, which despite the Mediterranean 15 degrees in the early, wet January morning hours have the grip level of an artificial ice rink. Every bet: Even if precious items like the Honda Fireblade and VFR were ready for a test drive – at least professionals would unanimously choose the new CB-Double-F.

Why? Very easily. Because in view of the fact that the facts have hardly changed (only aluminum instead of steel frame, a little less weight, with 107 instead of the previous 98 hp, slightly more power) it can be assumed that the qualities of the old model can also be found in the new model. Their unconditional neutrality, for example, the gripping, linear power delivery, the smooth throttle response, their relaxed seating position, the reliable ABS. All things that look unspectacular under ideal conditions, but are very welcome under these circumstances. A CBF does not need to get used to, it does not require any attention, it does almost everything by itself.

Fortunately, an F has not changed that. As usual, the comfortably cranked handlebar ends are well at hand, your feet rest in the right place on footrests, and long legs can also relax thanks to the three-way adjustable seat height (795 millimeters plus / minus 15 millimeters). Just like in the past, the four-in-a-row purrs to itself in the basement and takes on the gas cleanly even when the engine is cold. And even the expressions of life are not significantly different despite the four-in-one system with exhaust flap and filigree curved manifold system, which is more sporty than its model sister. Quite calmly and without a riot, the CBF takes the difficult, unknown terrain of its pitfalls, leaves space for the view on this and the other side of the path, where a breath of spring already blows despite the turbulent Mediterranean Sea and snowy treetops. 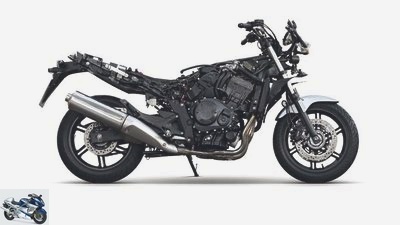 Now made of aluminum: Frame of the CBF 1000 F, which does not differ significantly in the basic layout from the steel part of the standard CBF.

So where is the news now? Clearly, the realms in which Honda saw optimization potential will never be reached at a relaxed country road pace. Regardless of whether it is a handling advantage thanks to five kilograms less weight or a performance advantage beyond 7500 rpm – Mallorca in January is not suitable for promoting new talents in the double-F variant. If you have any doubts in this regard, you have to wait for the direct comparison (MOTORRAD 6/2010). However, initially nothing speaks against a plus in driving dynamics. Example weight: Minus five kilograms less should not be rocket science in view of the tight 250 kilograms of the standard CBF, especially since not only the central tube aluminum frame is lighter than its steel counterpart, but also the exhaust system with only one silencer. In addition, there is no need to redirect the strut, because the rear strut is now directly linked and achieves the necessary progression via appropriately wound springs.

Example engine: Eliciting more than the previous 98 HP from a 1000 cubic centimeter inline four-cylinder with this pedigree (Fireblade 2006/2007) (Attention, Plan F: This is also available on request at no extra charge) should not be possible even for mechanical engineers in the first semester Be a problem. Especially not when the parts have long been on the shelf. Simply insert the slightly tamer camshafts into the cylinder head of the naked bike CB 1000 R, and the slightly sharper CBF drive is ready.

However, in the good old tradition, beyond the 5000 rpm it also clearly shows that it is now adding coal. There is a tingling sensation in the hands, feet and the ass, in such a way that it is considerably annoying. And if you already enumerate what has not gotten better: if you put the windshield all the way up in an effort to provide optimal wind protection, you will take pressure off your upper body, but you will also reap the juicy turbulence in the helmet area, which especially affects your ears.

In case of doubt and at the latest on the country road, put the windshield down, especially since the first practically verifiable advantage of the new CBF manifests itself in this regard. In contrast to its sister, the plexiglass can be easily locked in four different positions by hand and, above all, without tools. Push or pull vigorously with both hands – which makes the adjustment while driving an acrobatic, not recommended exercise – and you’re done. 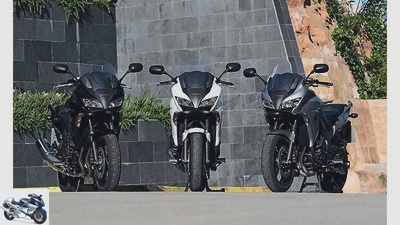 Mostly muted: Honda does not experiment with the colors. Deep black, silver gray and white are available.

The information content provided by the digital display fields to the right and left of the central rev counter is also demonstrably more extensive. In addition to the mandatory information such as mileage, trip counter (twice), fuel gauge and time, it is above all the current consumption, the average consumption and the amount of fuel burned so far that are often called up. The fact that a vile warning lamp still lights up when refueling does not bother, as Honda has given the tank one liter more capacity (20 instead of 19 liters) and the overall consumption should also be seven percent lower thanks to the longer gear ratio.

Will this update be enough for Sister F? Who knows. The crux of the matter: There are at least 900 euros between the two similar sisters. But also an obvious difference in terms of appearance. In view of the flirtatiousness with which the new CBF blinks from its pair of headlights, the sister does indeed look perfectly good. Seen in this way, Plan F could work.

Technical data of the Honda 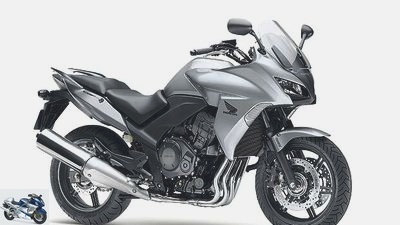 Interview with the Honda product manager 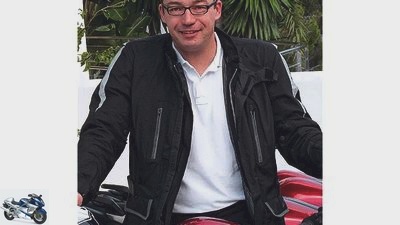 MOTORCYCLE: Mr. Klein, Honda brings with the new CBF 1000 F a motorcycle that does not differ significantly from the previous model. What shoud that?

Small: Our ideas for the new CBF 1000 were exactly those that have now been implemented in the model. This corresponds almost exactly to our approach with the little sister CBF 600. A little sportier, a little stronger, a brisk appearance. But still the old CBF virtues, because the customers are very happy with the motorcycle.

MOTORCYCLE: Okay, at the small CBF, the whole thing was under facelift. But they didn’t leave the old model in their range there either?

Small: We are of course in a price-sensitive segment here. The overall economic situation has not improved that. The new CBF 1000 F is priced 900 euros above the old CBF. We have therefore decided to keep the previous CBF 1000 in the range.

MOTORCYCLE: But the new CBF 600, which is equipped with features similar to the aluminum frame, was not more expensive either, but remained exactly at the same level as its predecessor.

Small: In the case of the CBF 600, we deliberately decided not to adjust the price. The CBF 600 is a typical entry-level motorcycle and we want to keep the entry barrier as low as possible.

MOTORCYCLE: What distribution between the old and the new CBF 1000 do you expect?

Small: We have planned around two thirds for the new CBF 1000 F.. 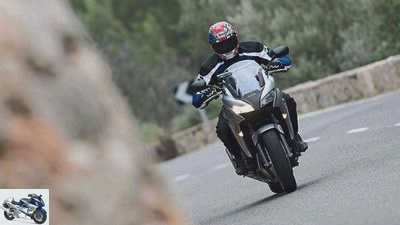 go to Article
To home page 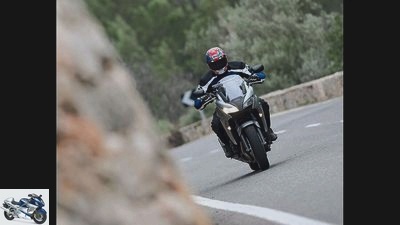 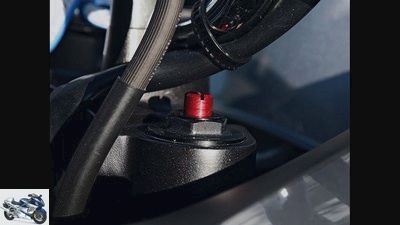 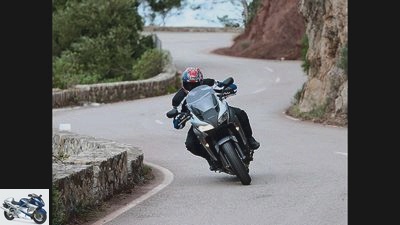 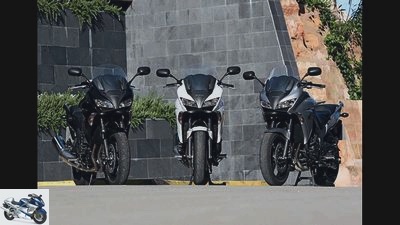 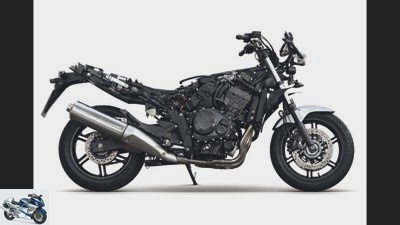 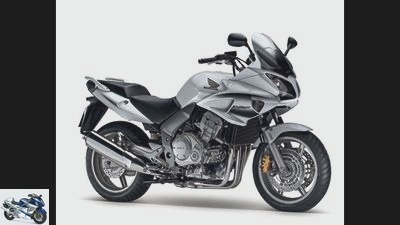 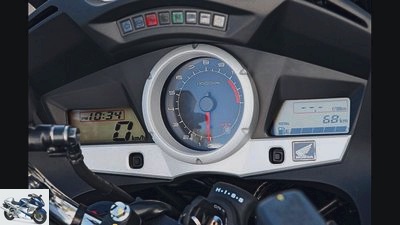 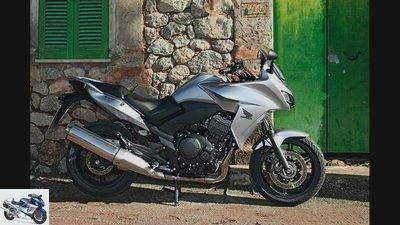 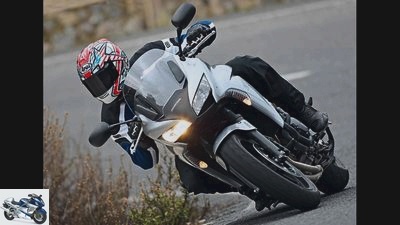 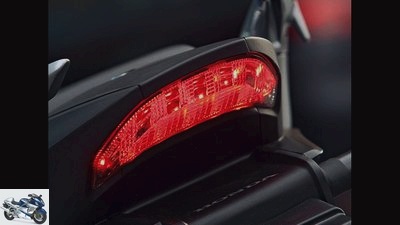