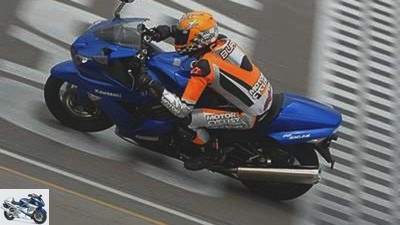 “America, you’re better off. ?? This is what Goethe wrote, and we add: “At least you got it earlier.” The most powerful production motorcycle in the world, the Kawasaki ZZR 1400. Colleagues from the USA have already been allowed to drive it and report for MOTORRAD.

Everything is larger than life in Las Vegas. And as long as there is enough money, the dividing lines between fantasy and reality can be drawn again and again. An ideal place to introduce Kawasaki’s completely new two-wheeled bullet, the ZX-14, to the European market ZZR 1400 called. With 190 HP the most powerful production motorcycle in the world, can it also erase the boundaries between fantasy and reality? as long as the driver stays on the gas. However, the 1400 rarely has to play to its full potential, it is usually driven normally. The seating position is between supersport and sport touring
settled. More upright than on the ZX-10R, not quite as upright as on the BMW K 1200 S. With a seat height of 80 centimeters, short-legged drivers find a secure footing. On the other hand, the tall guys lack a bit of space. As soon as you press the starter button, Kawasaki’s largest injection engine is wonderfully cooperative. The power output is very gentle below 3000 rpm, and the clutch is easy to operate thanks to the radial pump. And the Kawasaki engineers apparently didn’t want to hear any more nagging about sluggish gearshifts. The new six-speed gearbox is their best so far.
The largest of all ninjas glides through the viscous Vegas city traffic more easily than one would expect a cracker weighing 255 kilograms to do. She swings agile between taxis and hotel shuttles. More agile than its 1200 predecessor. Although the values ​​for the steering head angle and caster are only slightly different, the wheelbase has even been extended. The difference is that the new monocoque chassis houses the engine and other heavy parts further up and down, bringing the masses closer to the center of gravity. Roads that reveal hidden handling weaknesses were missing from the first test drive, but a sprint over a winding road told a lot about the ZZR. Back and forth might be too strong an expression, in any case this ninja rolls more willingly through fast corners than her ancestors or the highly acclaimed Hayabusa. The fork and shock absorber also work without the harshness of earlier parts.
Two balance shafts give the Big Block great smoothness. At 120 km / h in the sixth, no vibrations can be felt. The windshield is excellent for sport touring with an emphasis on sport, and the mirrors allow a useful rear view. If you can believe the trip counter, one tank of fuel is enough for over 320 kilometers. The bench is good for riding this route in one train. The only downer is the tight knee angle that tall people will complain about.
Avoiding such downsides as much as possible is a mature achievement of the ZZR 1400. Since the Z1 from 1973 Kawasaki reputation for super-fast motorcycles too
to build. The speed was often higher than the refinement in detail. It’s over. From the top of the head to the sole, the ZZR makes a sophisticated and well-made impression ?? welcome to brutal performance with no aftertaste.
The more than 190 hp get a run on the 2.4 kilometer Trioval of the Las Vegas Motor Speedway? four very fast corners with a twelve degree superelevation. Kawasaki did a lot of testing there to make sure that there were no problems at high speed. Standard tires, Bridgestone BT 14. Hey, this thing only runs 299, what’s going to go wrong? My colleague Barry Burke isn’t afraid of something quickly, but here … »When I got on the bike, I was nervous, thinking about the spongy steering feel, soft suspension and the production tires. But the rubbers and aerodynamics of the 1400s are great. There were gusts, but even when the speedometer needle was beyond 180 mph, the Kawa cut cleanly through the wind and lay still. “
Soft suspension, abnormal contact pressure in the elevated curves and quite a lot of boundary wall all around ensure that you don’t do anything on the speedway that causes problems for the chassis. Gentle steering is required. The ZZR 1400 seems to be able to cope well with high cornering speeds. At the exit of the fourth corner, Burke put in the sixth and switched back to the fifth for the other three. Eleven kilometers with an average speed of more than 260 km / h leave only a fine line between exuberant joy and the vision of finding yourself in the wall.
No one is surprised that there is more than enough power to spin the rear tire. Different
compared to its predecessor, however, it feels as if it came from an electric rather than an internal combustion engine: from 3000 rpm to the red zone at 11000 rpm in a powerful current without sudden peaks. Above 6000 rpm, the four-cylinder accelerates noticeably again.
According to the best Kawa tradition, founded by the GPZ 900 R, also had to
the ZZR on the acceleration section, the classic quartermile corresponding to 402.33 meters. Some felt uncomfortable at the thought of cocking the tap on this bike. But there is hardly a friendlier monster than the ZZR 1400. Whoever is able, a little water
to cloud, even a ZZR can accelerate beyond 190 in eleven and a half seconds. Look ahead, put 3500 revolutions on the watch, then release the clutch and pull in the gas in one fluid movement. Load three times at 11,000 revs without letting the front wheel rise above head height, avoid rev limiter ?? and that was it. Tearing the quarter mile in less than ten seconds gets more complicated. Andrew Trevitt, expert on acceleration values ​​at MOTORCYCLIST magazine, marked 9.92 seconds and the very best filed down one to three tenths of that. For comparison:
The fastest ZX-12R put at one
MOTORCYCLE measurement back 402 meters in 10.2 seconds; it took her 7.2 seconds to reach the 200 km / h mark.
“The 1400 produces performance in a completely predictable way,” says Burke. “This in combination with the easy-to-dose clutch makes shooting really easy.” Burke had more trouble keeping his 1.83-meter and 89-kilogram figure motionless behind the fairing during three switching operations. 10.04
Seconds are still not bad. Soft, obedient strength and the powerful clutch do a brilliant job.