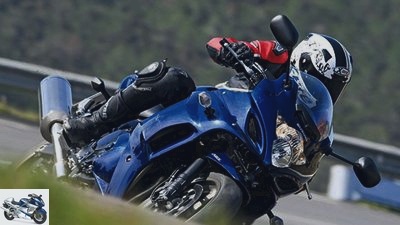 It is based on the Bandit, but the GSX 1250 FA should also appeal to younger drivers with its stylish full fairing. And at the same time mimicking a tourer for little money. Is the?

Mid-March in the hinterland of Barcelona.

Just a week ago, snowstorms were sweeping the hilly landscape here. Broken electricity pylons, uprooted trees and heaps of landslides are the hallmarks of this. In addition, there is plenty of slush left and right of the often damp and wet road, which winds up and down the slopes in tight and tight bends. What do you need now? A motorcycle that you can blindly rely on, that whispers to you: “I’ll get you through this”, and conveyed a lot of trust. A motorcycle like the new Suzuki GSX 1250 FA.

New? Well, the engine, exhaust and ABS brakes come unchanged from the successful big Bandit, just like the entire chassis: frame, wheels, aluminum swingarm, conventional fork as well as tubular steel handlebars and two-part seat – all proven components from the Bandit spare parts shelf. A great opportunity for the traditional Suzuki nomenclature “GSX-F” baptized sports tourers to go on their maiden voyage in the wake of these successful types. Or is it a burden? Because the new one would have been less bulky as well “Bandit 1250 F” can be called.

What is really new about it is essentially only the style-defining full fairing, which completely surrounds the black painted four-cylinder and gives the 1250, together with the double headlights of earlier GSX-R models, an astonishingly fresh, sleek line. The basic character remained balanced. A bandit is a bandit. Even if this shouldn’t be called that here. Sporty attitude or not, this big bike doesn’t stress you. The GSX does not excite, but stimulates. This engine, specially developed for the big bandits, has never lacked in one thing: torque. 108 Newton meters already at 3700 tours, still questions?

Simply strong, the water-cooled four-cylinder, now practically without cooling fins, just keeps pushing. 1000 rpm in third gear when approaching a zebra crossing? That leaves him completely unimpressed. Speed ​​is completely irrelevant here. According to the motto “I’m going to pull my arms out for you now” he answers every gas command very evenly and powerfully. If anything about the 1250 is completely unnecessary, it is the pseudo-sporty gearshift light in the visually and informatively upgraded cockpit – one of the few distinguishing features to the two previous Bandit models. But you don’t have to squeeze this bearish engine all the way to the red area at 9500 tours. Especially since it turns out rather tough after reaching the nominal speed of 7500. Experience has shown that more than the stated 98 thoroughbred horses are gathered. A good number of them are already trotting very low in the rev range. And thus makes the gear indicator, another difference to the naked and half-disguised bandit, dispensable. Simply shift into sixth gear early in the inconspicuous transmission and feel full thrust. 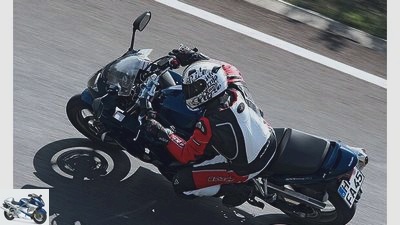 Sporty touring or sporty touring, the GSX can do both. Your handlebars are cranked far back.

Double throttle valves ensure, once under tension, the big block’s responsiveness. But if you take the four-cylinder out of the overrun mode again under load, for example at the apex of bends, this does not work completely smoothly. Probably also because the test machine had a lot of play on the throttle. The mighty muffler in the format of a ship’s chimney tipped under bridges escapes an unexcited four-cylinder grumble. Sonorous and dull. Really valuable, the exhaust system made entirely of stainless steel. The GSX 1250 FA has a larger cooler and a second fan for higher cooling performance. It only switches on when the fan of the first fan is no longer sufficient for cooling.

Despite two balancer shafts, the four-cylinder doesn’t exactly run as smoothly as silk. Therefore, the footrests are weighted with thick counterweights, the handlebar is mounted in rubber. It is not adjustable and is cranked quite far back. By turning four rubber blocks on the underside of the driver’s seat, it can be adjusted to two heights, either 805 or 825 millimeters. Whereby the knee angle is quite sporty and pointed for tall guys. Incidentally, this also applies to the passenger. Otherwise you can stand it for hours in the saddle and enjoy the landscape with your head held high thanks to the almost upright sitting position.

The disc, which is supposed to be narrower but higher than the Bandit S, is cleverly streamed from behind. The wind hits the helmet and shoulders without annoying turbulence. This universal talent leaves you in peace, clears your mind. Easy to drive as long as you keep the pace at socially acceptable levels. The 1250s can circled curves in a predictable, if not highly precise manner. There is little feeling for the front wheel. The GSX is not a racing roll. Of course, the 257-kilo buzzer also works in tight bends. But then you notice the high weight. No, man and machine clearly prefer wider radii in this constellation.

“Cumbersome” would be an exaggeration, but there are motorcycles that accept course corrections in an inclined position more gratefully. If you have miscalculated the curve radius or want to avoid one of the still many filthy, obstacle-riddled places, it feels like a moment of thought before the 1250 finds itself on the new course. The mounted Bridgestone BT 021 in special specifications operate reliably “AA”. They good-naturedly announce when it becomes too much for them. The ABS on the properly adjustable front brake regulates quite late; On the other hand, at the rear stopper, it is more of a trampling-clacking. 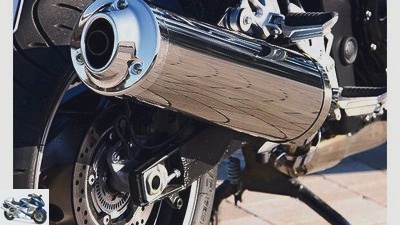 Evening mood by the sea, a last look at fine details and components: both hand levers adjustable, main stand as standard and plenty of lashing options for luggage on board. Hazard warning lights, chain guards made of aluminum and hydraulically operated clutch are also not a matter of course. Suzuki says that nine out of ten buyers of a 1250 bandit in Germany have so far resorted to the half-faired S version and at the same time hopes that the GSX will rank ahead of the bandit in the 2010 season. The new one has what it takes, even if, unlike the Bandit S, it has no two storage compartments and only Ram Air imitations in the panel.

Typically Suzuki, even with the latest model you don’t end up knee-deep in the red. After all, the elegant new 1250 with 9590 euros costs just 200 euros more than the half-clad sister S. And that’s a word. 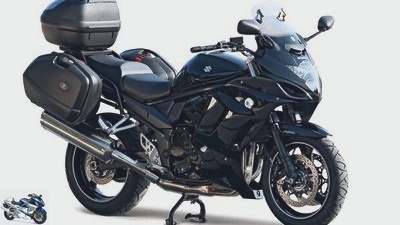 With a case system and a few gimmicks, the GSX 1250 FA becomes a thoroughbred touring bike.

So far, Suzuki has not had a real big bike tourer in its range, no model à la K 1200/1300 GT, Pan European, GTR or FJR. The GSX 1250 FA now fills this gap. It should do everything that the competitors can do with a hundredweight extra weight. Everything except cardan: main stand, comfortable seats in the front and back with a full 218 kilograms payload. Retrofittable side panels and luggage systems already existed for the Bandit S, but the GSX still looks more like one piece.

The support system made of tubular steel for 170 euros appears only moderately elegant, but in any case very solid. The 37-liter top case holds a full-face helmet. However, it sometimes narrows the passenger and costs 91 euros, a cover painted in the vehicle color 47 euros. This beautiful, but scratch-prone bonus is not available for the slim 33-liter suitcase from Givi. The suitcases swallow at most mini helmets and are available in a set for 249 euros. And you need separate keys again.

The completely mutated into a full-fledged low-budget tourer GSX 1250 FA with 22 liter magnet tank bag for 144 euros. The small one, adjustable in various detents, is effective “Vario touring”-Disc. Depending on the angle of inclination, size and posture of the driver, it guides the wind almost over the head. Cost: 117 euros. Also in the range of accessories: alarm system, GPS, tank guards and optical goodies.

Technical data of the Suzuki 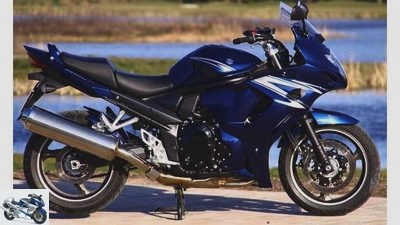 Quite a bandit, but with a pleasantly fresh line. Decorative strips (67 euros) and inner fenders (192 euros) cost extra.

The changes at a glance 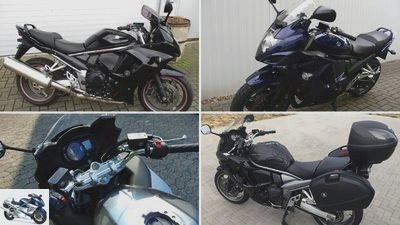 Are you looking for a powerful sports tourer? Then the Suzuki GSX 1250 F could be just right. Availability in the motorcycle market is good and prices start low, so the GSX1250F could be a real touring bargain. Here is the price comparison: used Suzuki GSX1250F in Germany.