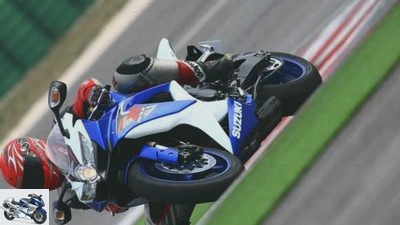 The new GSX-R 600 has not become the all-devouring roar. But it has remained a fine motorcycle that is given new impetus through diligent detailed work. Point.

The view gropes far ahead, while the speed increases steadily. Fourth gear, the shift light in the cockpit is annoying, fifth. The inner curbs in sight, an extremely tense driver reminds himself to be patient, holds the gas tight, waits. Now. Then events roll over. Lift the gas, a short steering movement, the right knee out, the curve and … crash, a bump hits, for a moment the horizon line breaks. The inner curbs push from the right, the gravel bed beckons on the left, disgusting-friendly. You won’t get me, I’ll just arrow right through it, typical for Misano, for the fastest and most ingenious right-hand bend on the course, which initiates a series of three further, increasingly tapering right-hand bends. And although all modern 600s have an extremely high level of chassis technology, Suzuki is the preferred place to drive in this passage. It places the driver low and far back, making it feel long and reassuringly stable. An impression that also contributes to the long tank and the fairing nose that is drawn far forward. It’s a big motorcycle, the GSX-R 600, which shares the chassis and most of the other parts with its 750 sister. A direct comparison must show whether this results in disadvantages compared to other 600s in terms of handiness. Who only the GSX-R 600 drives, you will in any case not find it unwieldy. There are three sections in Misano that fold from right to left, as well as one that calls for a jagged angle change in the other direction. In all fours, the motorcycle could be turned down more agile than the tires can handle without excessive tearing on the handlebars. Even more important is a homogeneous steering behavior, which the Suzuki shows over a wide range of lean angles.

The fact that the front wheel does not lead as steadfastly in very deep lean angles as it does on the way there is more due to the tire than the chassis. The Bridgestone BT 016 in special specification M, specially built for the GSX-R 600, revealed the typical behavior of tires on the racetrack, which are provided with a flexible substructure to suppress chassis unrest, but with rather hard rubber for the purpose of fine-tuning their damping properties: it slips earlier than his brilliantly adherent colleague from the rear wheel. Several times, reproducible and with several drivers. A later test will also have to clarify how this affects the country road in cold and wet conditions. A heretical question is already being asked: Why does an almost unshakably stable motorcycle like the GSX-R 600, which is also equipped with an electronically controlled steering damper for safety, need a special kickback avoidance tire? Since the changes compared to the tried and tested chassis of the previous model are limited to slightly lighter wheels and, according to the press release, a “refined” basic set-up of the same suspension elements, this choice cannot be understood. In addition to the design of the fairing, Suzuki has revised the engine of the GSX-R 600 in particular. She had recently got into trouble by the powerful Honda and Kawasaki as well as the brilliant Yamaha. 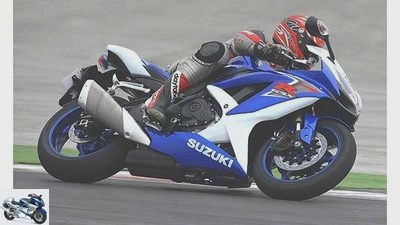 The 600 Gixxer is a large motorcycle that stretches its rider over a fairly long tank.

Not to mention the Triumph Daytona 675. More pressure in the middle without sacrificing top performance ?? That was the specification, and the designers tried to achieve it with a large number of smaller measures: finer atomizing primary injection nozzles, modified throttle valve bodies, different intake camshafts, higher compression, new pistons and rings, larger ventilation holes between the cylinders and more exhaust volume. The success of these measures does not exactly jump in the face with a vehemently rising front wheel, that much can be said after the first driving impression. However, those who appreciate more than just brute power can look forward to linear power development and decent load change behavior that does not get rough even at the high speeds typical of the racetrack. The limiter kicks in at 16,000 revolutions, but the power curve begins to decline much earlier; the adjustable shift light is best activated at 15500. Usually you switch up beforehand and if it gets later in the heat of turning corners, the lamp reminds you in good time.

Like the GSX-R 750 and GSX-R 1000 as well as the Hayabusa, the 600 can also be moved in different speed levels. There is full power in A mode, which is set automatically if the driver does not expressly wish otherwise. B and C cut about 20 to 25 percent of peak power for driving in the rain or in poor road conditions and thus ensure a more moderate increase in engine speed. The difference becomes clear when you switch from C to A with the gas open, but this feature is more of a gimmick than a real necessity. Much more important, especially for the racetrack drivers, is the new front brake system. A fast Austrian European GSX R Cup driver was delighted with the discs, which are now attached to their adapters with twelve instead of eight floaters. This increases the area for heat dissipation, but the surface pressure is lower, so that the adapters no longer work up as quickly. Analogous to each other, the radial pump and the radially screwed four-piston calipers have had smaller brake pistons; it may have something to do with the fact that they took a bite at Misano without the typical Suzuki response delay. Easy to dose and very pleasant. Which also applies without restriction to the whole motorcycle. 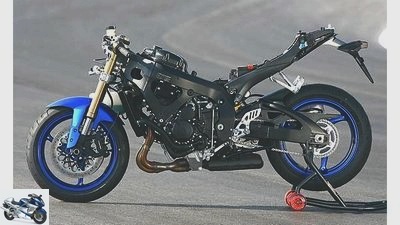 Since the frame and swingarm consist of only a few cast parts, the weld seams and paint quality of the GSX-R are impeccable.