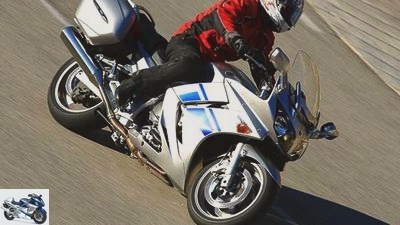 For the eighth model year, the Yamaha technicians came up with a lot to make the popular motorhome competitive again. In addition to the optimization in detail, the criticized ABS should now convince with short braking distances and fine control frequencies.

The has the best touring qualities Yamaha FJR 1300 proven again and again in previous tests. Good wind protection thanks to the electrically adjustable windshield, excellent seating comfort for pilot and passenger, long range and practical storage space make it a first-class long-distance rider. The coherent concept of the extremely strong cardan tourer put the competition in a tight spot. The recently upgraded vigorously, for example with BMW K 1200 GT or Kawasaki 1400 GTR.

But instead of developing forwards as well, went with Yamaha with questionable model updates, one or the other shot backfires. So recently a progressive, stiff throttle grip spoiled the joy of driving for some Yamaha customers who love to travel. Even more criticized because it is questionable in terms of safety: the anti-lock braking system. In the last tourer comparison (MOTORRAD 18/2007) it lagged behind the competition with miserable braking distances and high payloads. Yamaha obviously saw a need for action and is launching a slightly renovated FJR with improved brakes for 2008. 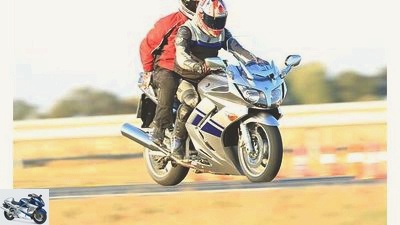 Mild weather and wonderful mountain roads, the French Provence sends its regards. On the tour through the Moorish Mountains around Toulon it becomes clear that the FJR 1300 has lost none of its original qualities. On the contrary. With the new Bridgestone BT 021 touring sports tires, which replace the antiquated BT 020 pair, Yamaha has gained precision and neutrality in terms of steering behavior. In an inclined position it develops less life of its own and less moment of erection. Nothing changes in the handling, as before, the 305 kilogram colossus with a full tank cannot always hide its mass.

Now that the load changes are also smoother, the steamer holds the line with the jerk-free throttle opening at the end of the curve. Whereby the start of the nominally 144 hp four-cylinder engine is a bit tough – more should be possible to do with 1300 cubic centimeters of displacement. It is always amazing how neutral and inconspicuous the cardan drive is, even though it does not have a torque support. Only very dry blows from rough transverse grooves are noticeably introduced into the chassis from time to time by the weighty drive train.

The clutch operation is still a bit stiff. The all-clear is finally given to the throttle, whose sluggishness, which has so far been criticized, does not cause painful forearm muscles due to a new cable control with linear instead of progressive transmission to the throttle valve. The bad news: According to Yamaha, the new components cannot be adapted to the old FJR models.

Changed throttle control with linear instead of progressive mechanics

New handle unit on the left (only with automatic version AS)

The new Yamaha ABS in the brake test

When MOTORRAD determined the deceleration values ​​of the Yamaha FJR 1300 in issue 18/2007 as part of the large touring comparison test, the shock was great. Loaded with a pillion passenger, the Supertourer only came to a stop after 52.7 meters from 100 km / h. The competition from Munich set the bar with 41.3 meters (Honda Pan European 42.4 meters, Kawa 1400 GTR 46.3 meters). With immediate effect, a three-stage instead of two-stage brake pressure control and new wheel speed sensors should eliminate the problem. In fact, the control frequencies, the pulsation in the brake lever and pedal and the maximum deceleration improved significantly in the country road tests. The latter, however, only if the front and back are properly reached. Anyone who relies on the front brake alone in an emergency is left. Which of course also has to do with the fact that due to the rear-wheel-heavy weight distribution of the tourer and the long wheelbase of 1515 millimeters, the rear wheel has to be decelerated considerably in order to bring the maximum braking force to the asphalt.
The final MOTORRAD brake measurements provided objective clarity. The previously critical braking distance with a pillion passenger from 100 km / h was shortened by over seven meters in the 2008 model and by a good four meters in solo mode. This means that the 2008 Yamaha FJR 1300 catches up with the mid-range of the strong touring competition in terms of control quality and delay.