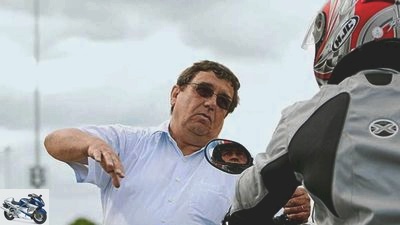 MOTORRAD reporter Michael Schumann (44) has had the three and one driver’s license since 1985. In 2011 he took the theory and practice test again. 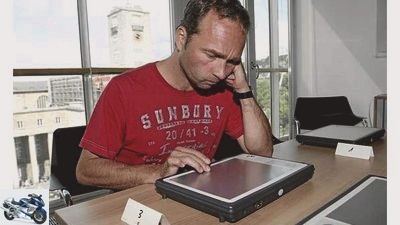 And you are absolutely sure that they will not collect your old bill if you fail ?! Pretty much every colleague who found out about my plan cracked the joke. And I always answered nicely: “Yes i’m absolutely sure.” But why should I fail, fail such a ridiculous 60-minute driving test? Where do I sit in the saddle at least 20,000 kilometers or more every year? Ridiculous! Only my neighbor Jorg, who disagreed: “That can happen very quickly. Already during the driving exercises, if you start wrong, don’t look over the shoulder, it’s over. And in theory, well, I’ll give you 22 points of error – you pass up to ten for the first acquisition, if you already have B, up to six.” Oh thank you for so much trust. On the other hand: Jorg should know. He runs a driving school in Stuttgart-Wangen, is a passionate motorcyclist himself and has already trained several hundred candidates for class A and brought them through the exam. So I wanted to put it to the test: Will I, who have been riding a motorcycle for 25 years, manage the class A driving test again off the cuff? But then the driving instructor answers again: “No chance, you don’t even know what the examiner wants to see.” Okay, so tell me, please ?? So it came about that my only preparation was to have Jorg explain to me in his driving school (Speed, Stuttgart-Wangen, Tel. 07 11/4 20 95 03) for 15 minutes , which six driving exercises are part of the test standard. And, very important, what I mustn’t forget: every time I drive off, a mirror, blinker, shoulder glance! “Every time you have to pretend you’re turning into the lane from the right side of the road.” Well, if that’s all.

The appointment is on a cloudy and warm Monday: at 3 p.m. theoretical test at TuV Stuttgart. I’m coming by motorcycle. To park near the TuV office in the city, I drive three meters over the sidewalk – against a one-way street. Nobody is watching yet. A sign on the door: “TuV Sud, theory test on the fifth floor.” I’m alone in the waiting room. I feel a bit like going to the doctor for an uncertain diagnosis; I actually feel something like nervousness. Gradually, more test items trickle in. Young boys, two apparently with a migrant background, and a girl. Everyone wants class B. When I learned to drive and ride a motorcycle, none of them were born. The girl is playing with his smartphone.

Then finally Erich Schniepp asks us into the test room. Schniepp, a handsome man around 50, is the top driving license examiner for the Stuttgart TuV. He sounds like he knows what he wants, but has an old-fashioned, kind charisma. He will also test me practically afterwards. Before that, I can sit down on the touchpad with the number three (pen and paper have been abolished for years). Schniepp explains how it works: “Just tap on the screen when you think the answer is correct.” The menu navigation is foolproof. I have 20 basic questions in front of me and ten more questions each for class A and B, but everything takes a good 20 minutes. When asked how many meters in front of and behind a stop you are not allowed to park, I can only guess, decide (incorrectly) for five (15 would be correct) and have to think about the factor by which the braking distance increases when the speed is doubled: four – which, thank God, is right. Less than 30 seconds after I got on “End exam” have typed, the evaluation comes and Schniepp grins over at me: “You would have passed class A.”. Eight points of failure. Assuming I had B already, I would have failed here too. And nothing for the car: 14 mistakes. I could swear this newfangled one “One-way supplementary sign” never seen before. Schniepp says: “This has only been around for 20 years.”

For the practical test, I have a Triumph Tiger 800 with me. Driving instructor Jorg gives me instructions from the car via the driving school radio as to where I should go. Inspector Schniepp, who has taken a seat next to Jorg in the car, sets the route. Through a thick traffic jam – do not meander through now! – we push towards the Cannstatter Volksfestplatz. Arrived, Schniepp explains the exercises he wants to see: evasive action from 50 km / h, braking and evasive action, emergency braking from at least 50 km / h, slalom at 30 and slalom at walking pace – sounds like child’s play. Meanwhile, Jorg puts the cones on.
Once I choke off the test tiger, which is still unfamiliar to me, three times I forget to blink when driving off. Schniepp shakes his head sullenly and waves me over: “Always approach from the right edge of the lane!” The exercises themselves are then not a problem, but as we drive on, the feeling of having just embarrassed me remains.

But now: the examiner directs me out to the B 10. I drive it almost every day. How fast can I get here again? 80? 100? Or just under 120, like everyone else? I choose 90. “Take the next exit, then turn left”, the radio croaks. It goes through 30 zones and up into the vineyards. I stop nicely at a stop sign, but then I’m unsure when two junctions come one after the other with a lowered curb: Is this right before left? Slightly taking off the gas, demonstratively looking inside can’t do any harm. The speedometer shows 48 at a permitted 50 km / h, so it should fit. Without further incident, we head back into the city, to the parking lot behind the TuV office. Full of expectation, I take off my helmet and fumble the annoying radio plug from my ear. Examiner Schniepp has got out, has his portfolio in hand and looks serious: “What standard should I apply to you??”, he asks himself more and then explains to me that mine “Traffic observation” was not sufficient during the exercises: look over the shoulder and blink when starting up ?? Yes, I know and I am contrite. Then the two right-before-left, which actually were: “Borderline”, how I rushed through there. “Just looking is not enough”, he says I should have slowed down here. Then he wants mine driver’s license see. “Aha, A, B, C, yes, everything is there, from 1985, well, I can definitely certify that you have vehicle control”, he says with a grin and gives me the card back. We say goodbye in friendship. But when I drive away, the feeling remains that I would have failed a real exam. Incidentally, 25 years ago I passed straight away.