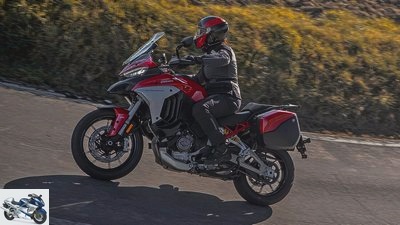 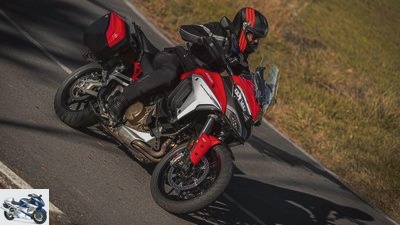 1/20
Ducati has achieved something amazing with the new Multistrada V4: a travel enduro that fuses mild and wild character traits into a harmonious unit. 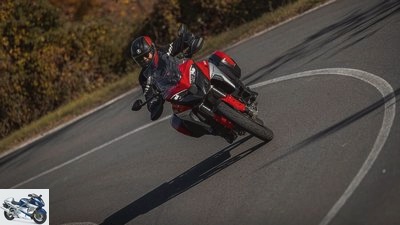 2/20
Even if it looks different here: The cases fit the handlebar width exactly and do not protrude beyond the silhouette. 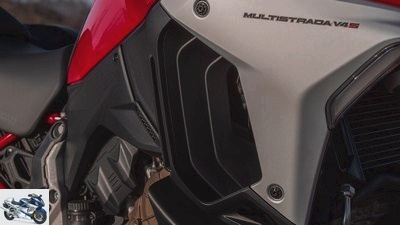 3/20
Side spoilers support the flow of cooling air and the downforce at the front. 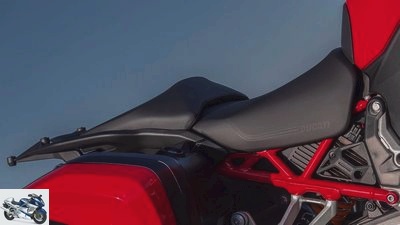 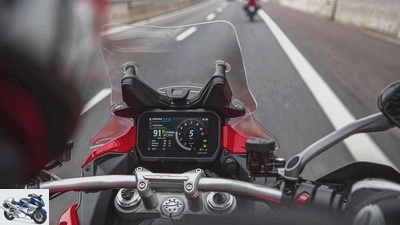 5/20
The cell phone, and thus also a navigation system, can be mirrored on the TFT display. 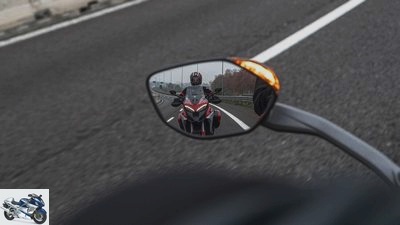 6/20
Blind spot warning: Illuminated signs on the mirror warn of possible danger from behind. 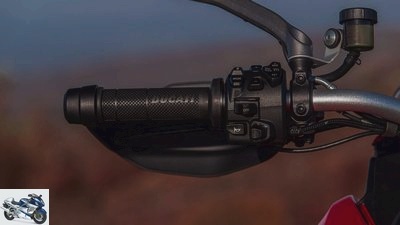 7/20
Only with the S version: To the right of the horn there is a joystick for scrolling through the menu. 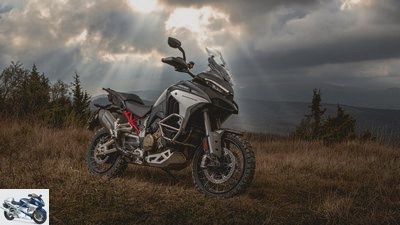 8/20
With the accessory package “Enduro” the multi can be trimmed off-road – and should be a real power off-road. 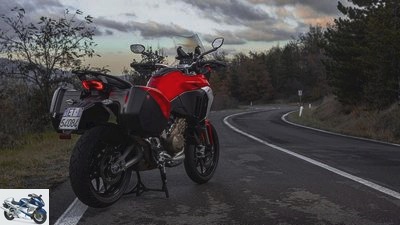 9/20
The radar eye is located under the rear light (S version only). The cases can be assembled in a flash. 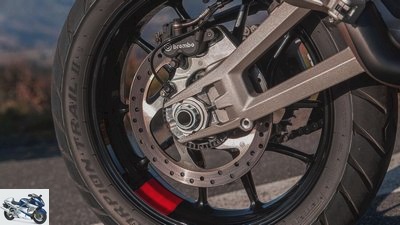 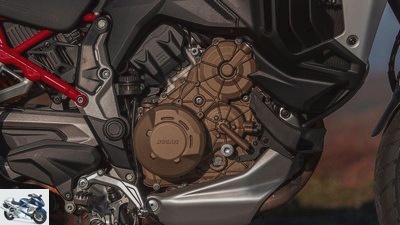 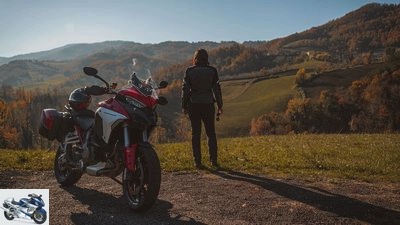 12/20
The new Ducati Multistrada V4 is actually an exciting all-rounder for roads of all kinds. 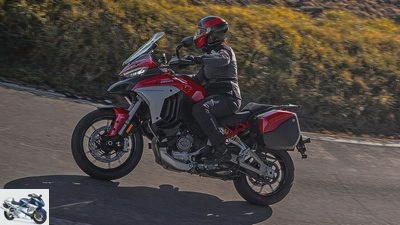 13/20
She masters duty as well as freestyle and brings tingling emotions in the process. 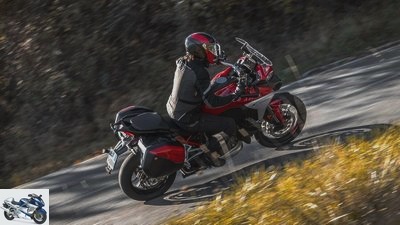 14/20
The tester simply lost her heart to the new engine. 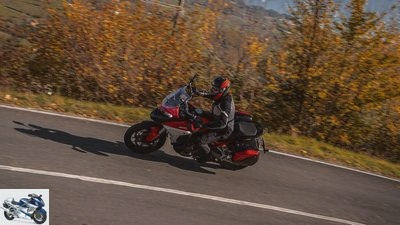 15/20
In and on the new Multistrada, Ducati has packed everything that is good and sometimes even exclusive. 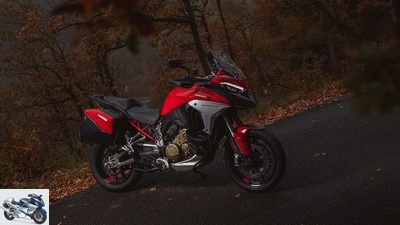 16/20
From the radar system to auto leveling to the joystick for easy scrolling in the menu. 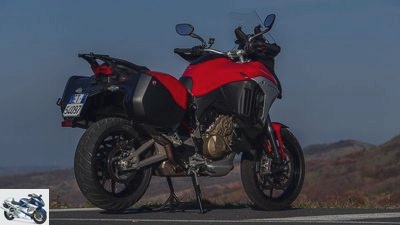 17/20
All new multistradas have cornering ABS, traction and wheelie control. 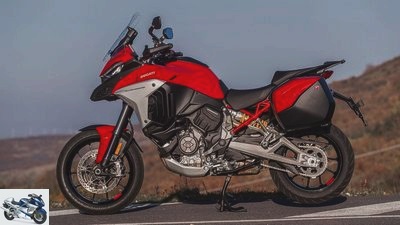 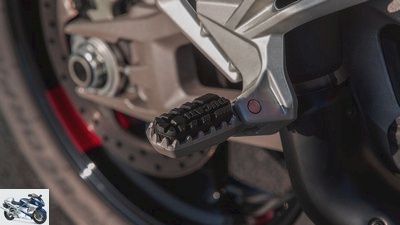 19/20
The Ducati lettering on the footrests. 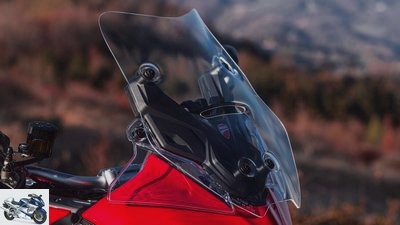 20/20
A single finger is enough to pull the windshield upwards.

That the Ducati Multistrada V4 S is a really big hit, it is clear after just a few test kilometers. Seldom has a large travel enduro been moved so playfully, so lightly and at the same time so powerfully. At the same time, the Multi V4 met with a certain degree of reserve before setting off: After all, Ducatis with a tourist touch had always turned out to be disguised athletes in travel trim. This time, however, the developers did a great job and built a completely new motorcycle: engine, frame, chassis, set-up – everything designed for dynamic touring and equipped with smart solutions.

A few of them can already be seen on the short stretch of motorway that is due at the beginning of the test drive and is used to try out the integrated radar system. Putting both feet on the floor at the toll booth is very easy at a height of just under 1.80 m. If necessary, the bench can be threaded two centimeters lower under the tank, without tools. The small compartment on the tank for the smartphone is super practical, including a USB socket for charging, and there is also space for the motorway ticket. And of course the somewhat unwieldy transponder of the keyless system. Now casually pull the windshield up – a single finger is enough -, accelerate and off you go with an inspiring thrust. The Ducati Multistrada V4 S hovers over the Autostrada as if in a bubble, with little of the annoying airstream arriving in the saddle. Thanks to radar, there is even some leisure time to appreciate the new menu, which can be operated intuitively via a joystick. Six menu languages ​​are available, including German. The 6.5-inch TFT display provides clear information and can even be tilted slightly to maintain legibility even in direct sunlight.

Feels lighter than it is

Motorway trips are a compulsory program that the earlier multinationals also mastered well. The freestyle in the winding course therefore promises more excitement. On the “Whole brine”, a fast mountain and valley railway south of Bologna, applies to the new Ducati Multistrada V4 S. And how! It seems to find the right line almost by itself, so promptly it follows every steering command. But never gets wobbly or nervous, but always remains stable on the line. Ducati certifies 240 kg with a full tank, but it feels much lighter, so lively it whizzes through the curves. The comfortable, active driving position, which, in combination with the 19-inch front wheel, ensures an excellent feeling of control, as well as the balanced semi-active chassis from Marzocchi, which compensates for unevenness in the asphalt, helps. And of course the V4, which hangs perfectly on the gas, is eager to do something and is always present with exactly the right power.

Engine of the new Multistrada V4

Anyway, this engine! Ducati has succeeded in creating a real gem. It comes from the super-sporty drive of the Panigale V4, but for the Multistrada V4 S the developers trained it in more reserved manners and increased it to a torque-enhancing 1,158 cubic meters. With its impressive thrust even at low and medium speeds, it conquers the tester, previously an avowed four-cylinder skeptic, in no time at all. Contrary to what was expected, she doesn’t miss the V2 a bit, because this four-cylinder doesn’t need high revs to develop temperament. He never grudges, he never acts aggressive or even fearful. On the other hand, it is pleasantly aggressive, after all, a hefty 170 hp are available. If you want to know, that from Ducati leads “Granturismo” baptized drive from around 6,500 rpm a powerful muscle game with a lively forward thrust, including a pleasant tingling sensation in the stomach.

Soundscape can make some V2 jealous

That after decades he breaks with Ducati’s Desmo dogma and relies exclusively on disdainful rocker arms – a free gift. An engine that develops such a linear and perfect acceleration from its low rev range is allowed to operate its valves as the engineers deem it to be. Especially since the robust but subtle sound is also right: thanks to the 70 degree crank pin offset on the backward rotating crankshaft, the firing sequence delivers a soundscape that would make some V2 jealous.

But how does Ducati’s new touring wonder work on small and tiny bend lanes? In this respect, the Apennines have a wealth of routes to offer. So on towards the Futa Pass, deep into the area of ​​the Ducati test drivers, where tight turns await as the highlight. When the Ducati Multistrada V4 S also mastered this demanding task in third gear at the lowest engine speeds without complaining or twitching, wobbling or hesitating, the tester was finally over. The combination of refreshing dynamism, lightness of foot and a high level of comfort – great!

For Ducati, the new Multistrada V4 is a real milestone, because it invalidates many prejudices with which the brand is struggling.
Ducs are always trimmed for maximum performance? The Ducati Multistrada V4 S also has an abundance of performance, but delivers it in a highly cultivated and well mannered manner.
Ducs are way too loud? Not the Multistrada V4, its full, but politically correct sound and the standing noise of 92 dB (A) even satisfy the Tyrolean noise monitors.
Ducs are too expensive to maintain? On the Multistrada V4, the valve clearance only needs to be checked every 60,000 km, which is world class.
Ducs are fragile and unreliable? The manufacturer gives a four-year guarantee on the new Ducati Multistrada V4 – a convincing counter-argument.
Ducs are radical? This is actually what the new multi is – namely, radically good.

So no fly in the ointment? Maybe a little one after all. The engine died twice while coasting. According to Ducati, this is probably due to the fact that it was a pre-production model that was not yet perfectly coordinated. A detailed test in MOTORRAD will soon clarify whether this is the case. We are also eagerly awaiting the duel with the BMW R 1250 GS – it could be close for the woman from Munich.

Ducati confidently had one in advance “unique” Motorcycle announced. Typical Italian exaggeration? Are you kidding me? Are you serious when you say that. The new Ducati Multistrada V4 is actually an inspiring all-rounder for roads of all kinds, it masters duty as well as freestyle and brings tingling emotions in the process. We don’t even want to talk about the engine now – the tester simply lost her heart to it.