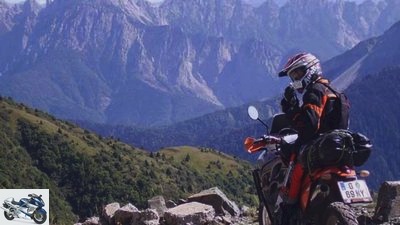 Eastern Alps
Over the peaks to the Adriatic

Without detours from Austria to Croatia ?? With their KTM enduros, father and son wanted to go on a tour that really corresponds to the suffix »Adventure«.

The brake light in front of me grows just as quickly as the hairpin that suddenly appears in front of it.

Now only a decisive pull on the lever helps! Wedged between the tank bag and the pack sack, I stabbed the curve down the curve rather inelegantly with my fork deeply submerged, including the entire width of the street. Fortunately, no one comes across, so the faux pas goes unpunished. Phew! It’s probably the burgeoning travel bug that is making me so inattentive. Just left Graz and the gentle, southern Styrian hills, the »entry« to Carinthia is the first highlight of our still young tour.

Over the B 69, which climbs up to 14 degrees to 1349 meters and offers almost 20 kilometers of wonderful curve pleasure, we swing the last bends down into the Carinthian Lavamund. There we follow the main road via Bleiburg to Ferlach, slowly venturing into more touristy latitudes. Although the cloud cover barely lets in the sun’s rays, the Carinthian cosiness takes hold of us at the latest during the first coffee break. Finally holidays! The feeling becomes even stronger from Hermagor, where the mountains come closer together and the motorbikes thunder towards you at ever shorter intervals.

Eastern Alps
Over the peaks to the Adriatic

Our first stage only ends in the Gailtal valley, at the foot of the Plockenpass in the south and the Gailbergsattel in the north. The ideal starting point for extensive pass tours, machines from all over Europe crowd in the valley, and we are planning an off-road excursion for the next morning. Halfway up we find the entrance to a hiking trail and hopefully to the Joch Alm at 1554 meters. After a few kilometers it’s over, a Murbruch blocks the forest path. Not a good start. Brief advice on the hiking map. There is also a slope on the opposite mountain slope. And indeed, we get to Waidegger Hohe at an impressive 1961 meters via a gravel dairy farm. Happy to finally be back at rest, I rumble uphill and enjoy the view that is becoming more alpine with every meter. Cows graze next to the path, occasionally a day trippers or cyclists come across as dust. For a short time even a historic off-road vehicle cruises in front of us. All kinds of road users like these slopes.

When stopping at the Straniger Alm, the table neighbors point out other legally passable gravel roads on our map. But we want to continue to Italy, which begins just a few kilometers south. Following the Sennerweg, we cross the green border on a steeply sloping, muddy passage. Bon giorno, Italia! The tiny, asphalted Passoa di Lanzo del Cason soon catches us, which leads us a little west towards Monte Paularo and its rough gravel driveway. Apart from a waving family and an oncoming GS rider, we are on our own. Shortly before the 2043 meter high summit, the path ends at a small lake, picturesquely framed by the Carnic Alps. In Paularo we meet the GS rider again, talk shop over the first Italian espresso of the tour.

Since the day is progressing briskly, we roll quickly via Tolmezzo to Moggio. There it is again important to find lonely and higher roads. At Sella Carnizza the altimeter is back to a healthy 1000 meters, and up to the Slovenian border at Uccea it goes through the forest in magnificent, lonely serpentines, almost like a race course. The sun is already sinking when we take the first turn-off to the Stol immediately after the abandoned Slovenian border post. The asphalt soon flows into a freshly graveled path that continuously winds upwards. Now real enduro terrain begins! When we arrive at the highest navigable point at around 1500 meters, the evening sun is just bathing the surrounding peaks in its most beautiful final light. With a heavy heart we start the inevitable descent at some point. With the glowing fireball behind us, we enjoy the challenging descent before we fall into the next best hotel bed in Kobarid, dead tired but happy.

The goal for the next day is clear: we really want to go to the sea. That is why we start early up to Livek, where we follow the curvy border ridge road in the far west of Slovenia in the hope of unpaved sections over Kambresko to the picturesque canal. Unfortunately, only short passages are graveled, but the tiny villages in the middle of the almost untouched nature make up for it, as does the bright green Soa in the further course towards Nova Gorica.

There we briefly switch to the busy main route to Postojna in order to cover kilometers. A little further to Cerknica, then the busy areas are behind us, and we roll through lonely villages with badly furrowed roads towards Croatia. When entering the country, the Croatian border guards concentrate more on the Formula 1 race on television than on our passports, well – it should be fine with us. Behind it, to Delnice, there is a real thrill of curves on a single-lane road that is snuggled against the mountain. Only unexpected gravel passages are tricky. Time flies, with the highlight of the day still ahead of us. At Belo Selo we turn to Mrkopalj and finally arrive in the remote village of Tuk. The nature reserves Bijele and Samarske Stijene begin behind, the highest point of which rises to 1,335 meters. A gravel road leads to the Matic-Poljane plateau, where 28 lined-up lime monoliths are reminiscent of a partisan squad that froze to death here in World War II. At the end of the plain, the slope disappears deep into the dense forests of the nature reserves. Moss-grown blocks of stone are increasingly protruding from between the giant dark trees, and we literally steer the KTMs through small rocky gorges. Side arms branch off constantly into even deeper corners of the reserves, but we follow the main path, which at some point brings solid asphalt under the tires again. Via Jezerane to Krizpolje we let the machines run free and roll into Senj with the last light. We have reached the Adriatic.

The next morning, under the bright sun, we climb the wonderful coastal road up to Sveti Juraj into the hinterland. Soon there will be another 1000 meters of altitude difference, and in Krasno I almost imagine myself in alpine Austria. In front of us lies the Velebit Nature Park, our hoped-for off-road highlight of the trip. With 2000 square kilometers it is the largest mountain range in Croatia. What Olympus is to the Greeks, Velebit is to the Croats. We follow the signpost to Stirovaa into the dense forest and soon the signs to Mount Zavizan. For a small fee we climb the fun gravel road to a refuge at almost 1600 meters. The view is stunning: to the west the karst coast with the islands of Krk and Cres, to the east the dense mountainous area of ​​Velebit.

The further we follow the narrow path to Stirovaa, the deeper we dive into the national park. Extensive forestry work testifies to the abundance of wood in the region, and apart from the occasional log truck, nobody is on the road. The asphalt ends behind a few neglected forest workers’ huts. The lonely forest path captivates us and creates a feeling of being cut off from the rest of the world. As if there was only nature and us. As if euphoric, we dust off towards Kugina kua. A point on the map that ultimately turns out to be a rest house in the middle of nowhere. On increasingly rough slopes, the KTMs slowly bump back into higher regions. Suddenly I see my father’s 950s slip over the front wheel. Fortunately, he has enough speed to just catch the big enduro and avoid the impending fall. On closer inspection, we discover the finest sand under the stones, which triggers these slides.

Ever higher stone spindles suddenly pile up all around, and through a small tunnel we get directly into the interior of such a miniature roundabout. It’s scary and overwhelming at the same time. The slope swings up one last time until it finally falls to the valley, where it finally turns into an asphalt road. A few more kilometers and Plitvika Jezera is reached, the world-famous Plitvika Lakes National Park, the last stop on our journey.

Unfortunately, it is only enough for a short stopover, because we have to quickly return to home. No more gravel, no more slopes, just dreary highways to Zagreb. Only the bypassing of the capital via Samobor leads surprisingly, through a beautiful wine-growing area and a last wonderful Kurvendorado. At Bregana we enter Slovenia, petrol and food are again in euros. Another 100 kilometers to Maribor. We’ll be home soon.

When I go through the trip master in the garage in the evening, there are almost 1,500 kilometers. Of these, zero motorway, but over 180 off-road. The KTMs lean on the side stands, dirty and with noticeable furrows in the tire profile. As if it could go on straight away. Who would have thought that so much adventure begins almost behind the front door?

This little-known route over the main ridge of the Eastern Alps to the Mediterranean is not only exciting for enduro riders. With good cards on board? at least a scale of 1: 200000 ?? There is also an alternative passage for street motorcycles almost everywhere.

getting there
If you want to start the tour in Carinthia, the fastest way is via the A 8 Munich-Salzburg and via the Tauern tunnel on the A 10 to Villach / Spital (toll for the motorway and Tauern tunnel just under 20 euros). From there you can take the federal roads 100 and 87 into the Gailtal, the starting point of the tour. Much more attractive, however, is – if the time is there and the winter closure is lifted – the route over the Tauern instead of underneath. For example, from Salzburg via Saalfelden or Bischofshofen via the Grobglockner High Alpine Road (also subject to a toll: 18 euros) to Lienz.

The distance
All major roads on this tour are in fair condition. Away from the busy routes, however, the asphalt varies a lot. The palette ranges from unexpectedly good to barely available. Especially in the deserted areas of the border regions as well as in the hinterland, sports tourers can sometimes reach their limits. The off-road routes mentioned are no problem for experienced drivers, even with large enduro bikes. Provided the tires have enough profile. Otherwise, these routes are made for all-terrain enduro machines, and all of the routes described are legally passable. That is precisely why one should follow the motto »Travel instead of lawn« so that it stays that way in the future. The network of filling stations is usually dense as usual, but the fuel supply should allow a range of at least 200 kilometers. Motorcycle workshops become rarer the further south you get, in the hinterland you are literally on your own.

Countries and travel time
With the exception of Croatia, all countries are members of the EU and are therefore exempt from border controls. You only need an identity card to enter Croatia, or even better a passport. The official currency of the Croatians is the kuna, the euro is only accepted in larger tourist areas. Accommodation and tent sites can easily be found in all countries outside of the main season. Theoretically you can go on tour from May to October, whereby it is advisable to avoid the heat and holiday months. Although the tour can be chosen over a relatively long period of time, the specific time should primarily be based on a stable overall weather situation over the Eastern Alps.