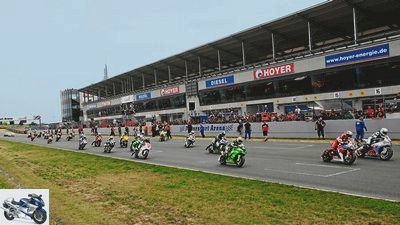 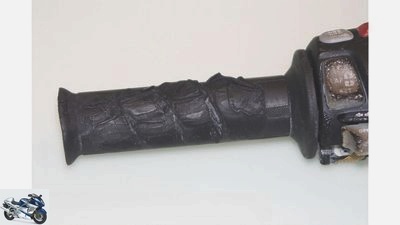 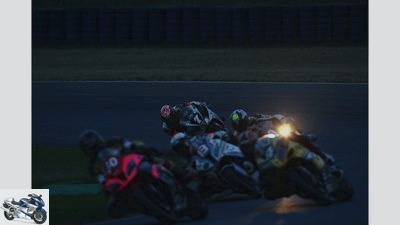 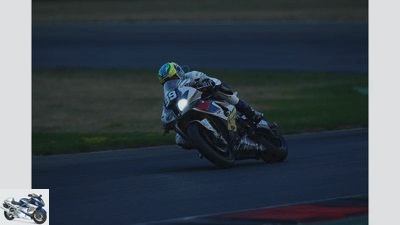 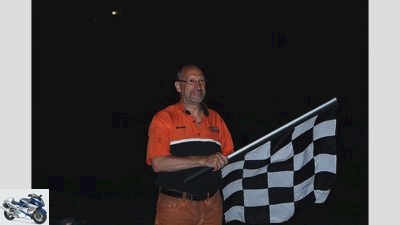 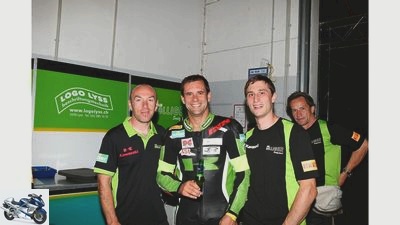 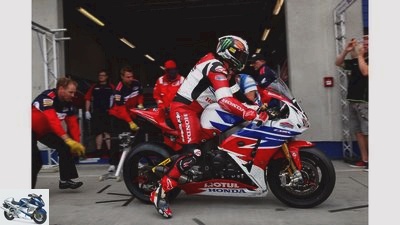 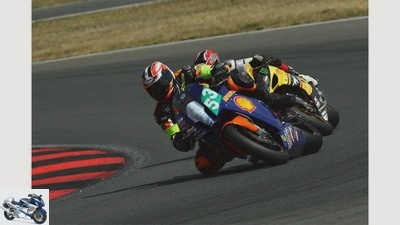 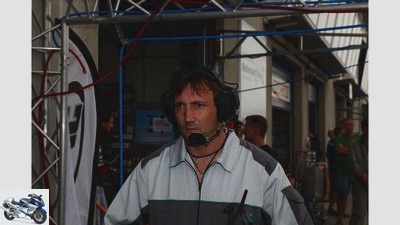 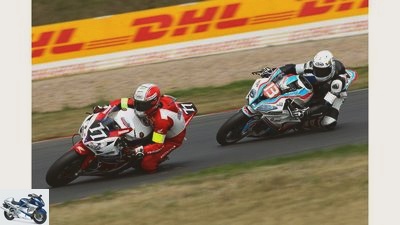 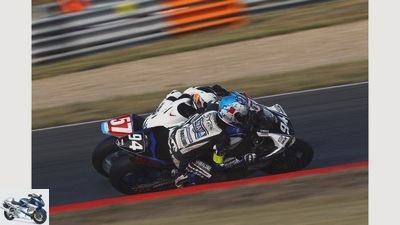 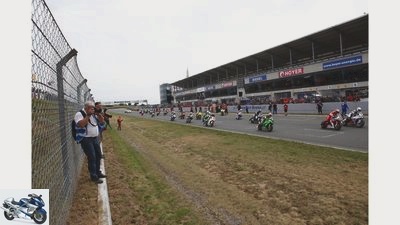 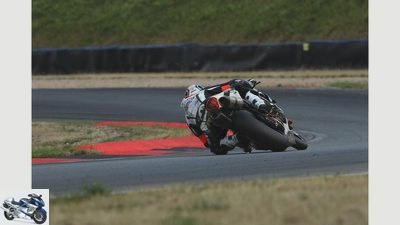 In 2013, the German Speedweek took place in Oschersleben for the 16th time, and the world’s elite of long-distance racers always meet. A real top event that deserves more attention.

Beer coasters are wonderful. Ex-CDU financial thought leader Friedrich Merz once wanted us to be able to calculate our income tax on it. Speedweek race director Ottmar Bange, on the other hand, once scribbled the plan for a long-distance race on such a beer mat in a humorous hour. The result of this scribble took place in Oschersleben for the 16th time. The endurance world elite met there to fight the penultimate round of the Endurance World Championship at Speedweek.

Drivers of various series from all directions

But the Eight Hours of Oschersleben also offer local hobby teams the chance to start at the World Cup. That makes the Speedweek an exciting playground for race-crazy motorcyclists from all directions. Nowhere else can you find so many drivers from the most diverse series in one heap – from SBK World Championship pilots to fast hobby racers from the DLC to TT road racers everything was represented again.

After qualifying, however, the usual suspects were in front. First and foremost the world champions SERT, followed by BMW France, the Austrians from YART, Yamaha GMT 94 France and the Swiss Bolliger Team – all within 1.42 seconds. Places six to ten were occupied by teams from the Superstock category, including the German world champion team of Rico Penzkofer. Only in eleventh place were the road racing cracks around John McGuinness and Michael Rutter from the Honda-TT Legends team.

In order to be able to make optimal use of the lighting conditions and to save the hobby teams unnecessary costs (see interview), the race management decided to bring the start forward by a quarter of an hour. 12.45 p.m. – in front of a cheering backdrop, the participants traditionally sprinted across the track and jumped on their machines.

Vincent Philippe had jumped on the SERT-Suzuki and pulled ahead. After two laps, Florian Marino fell, David Checa couldn’t evade and had to go down. What then followed is what makes a long-distance race so fascinating: Both machines came back into the pits and were able to start the race again. The Yamaha factory team GMT 94 fell far behind due to Checa’s fall and was in 28th place after an hour.

The tension in the face of the former racer Rico “Penz” Penzkofer was clearly visible, especially after a small breakdown when removing the rear wheel had cost the top German team valuable time. Otherwise, things went great for the “13”, and when team boss Penz later stood on the top step of the Superstock podium with Jason Pridmore (USA), the Spaniard Pedro Vallcaneras and the British Steve Mercer, everything was forgotten. If the overall victory had been decided by the volume of the audience, they would have cleared it in front of their home crowd, although the audience numbers were unfortunately rather disappointing.

But SERT had not given up the overall lead after the start and Vincent Philippe, Anthony Delhalle and Julien Da Costa drove the thing confidently home with a two-lap lead after 316 laps.

It was more exciting behind it: For a long time it looked as if second place would go to Manfred “Mandy” Kainz ‘YART team, but when Broc Parkes drove off after a pit stop, the motorcycle caught fire. Quick action could erase everything. Parkes drove the fastest race lap with 1.27.151 minutes, but was unable to catch up with the BMW Motorrad France team and thus the podium was established: SERT ahead of BMW France ahead of YART.

Victory in the Open class and 15th place overall went to the number 56 team from RS Speedbikes with Lars Albrecht, Tobias Kollan and Filip Altendorfer in a BMW with 299 laps driven.

Fireman extinguished with presence of mind

Remarkable things in fast forward: Even the Bolliger firefighter with presence of mind extinguished the burning YART-R1 in the pit lane – and thus made his contribution to the Austro-Swiss love of neighbors. After eight hours, the Swiss were just 19 seconds short of third place and the YART team. PS racer Horst Saiger and IDM cracks Roman Stamm and Daniel Sutter, like the whole Bolliger team, showed a great performance. Saiger drove very aggressively on his last turn and tried everything again, but he could not make up the gap to third place. Quote from a federal team member: “We probably shouldn’t have deleted it so quickly.”

If there had been a prize for perseverance, it would have gone to Konni Schittko’s KTM Endurance. A valve shim was defective in qualifying. So it was time to remove the engine and reinstall it. In the race it got really big. First the clutch had to be changed, then the sprocket broke and finally Hendrik Ladiges had a heavy highsider. The bike literally came back in half. The driver remained intact, to everyone’s delight. The group of Super Duke Battle drivers worked feverishly on the RC 8 for 59 minutes and finished the race 81 laps behind.

The MSD-Steeldesign team was hit just as badly. A highsider from Onno Bitter at the start / finish in qualifying: the BMW landed unhappily, lost a lot of fuel and went up in flames. Bitter tried to pull the motorcycle out of the flames, but the handles were so hot that his fingers were leaving marks. The bike was brought back to life until shortly before three in the morning, but after five laps the number 111 had to give up due to braking problems.

The 20-time TT winner John McGuinness von Oschersleben was disappointed. “I’ve been here a couple of times for testing and so far I’ve done three races. I really like the track, but I’m getting annoyed that it wasn’t enough for the podium again. ”Well, maybe it’ll work out next year. 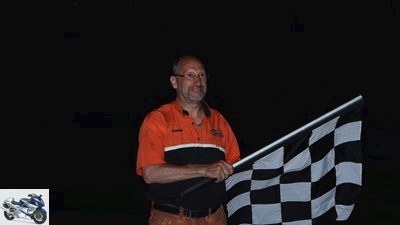 Ottmar Bange, inventor and maker of the Speedweek.

Unfortunately, there were few spectators at the 16th Speedweek, why?

Fear: It is becoming more and more difficult to get spectators to the race track – not only here. The spectators are getting older and older and are no longer willing to endure that long or sleep in the tent.

This time the start has been brought forward. The race ends before it is finally dark. Because of financally reasons?

Bange: Yes. I thought of the national teams. Otherwise you would have had to invest a lot in lighting. Illuminated start numbers are mandatory for the first time this year. They’re not cheap, and they’re hard to come by too. In order to enable the teams to start from the DLC, for example, or to make it cheaper, I brought the start forward.

Will there be another 24-hour race at Speedweek at some point??

Worry: I don’t see that. There are several reasons for this. On the one hand, approval is becoming more and more difficult, both in the area and here in Oschersleben. In addition, it is very difficult to get the necessary number of helpers. In a 24-hour race, that’s more than 250 helpers just for the track – without parking spaces and security. And the costs for the teams are simply enormous.

This year the endurance world championship consists of only four races, Doha is out. The series is in a downward trend?

Bange: There is currently a firm plan for six races in the 2014 season.

Everything went relatively smoothly on the track, and there was nothing serious in the pit lane apart from a small deflagration. Nevertheless, you were very strict about the “one meter distance regulation” when refueling. For this you have allowed stranded machines to be brought back with the trailer for the first time. Actually, on the long haul, the driver always had to manage it to the pit entrance without outside help. Did you turn a blind eye??

Bange: No, this has been a fixed provision in the regulations since this year and has also been implemented. This is also the case at Bol d‘Or and Le Mans. We just want to give the teams the chance to stay in the race longer.

Are there special moments from the 16 years that will be remembered?

Bange: Oh, there are a lot of stories, but there is one I will never forget: The Chinese Zongshen team failed here once, Stephane Mertens fell. The Chinese told me it was their custom that in the event of a failure they either kill a chicken or the person responsible, that is me. We got a live chicken within half an hour and put it in the Chinese box. Then they grilled it and I was off the hook.