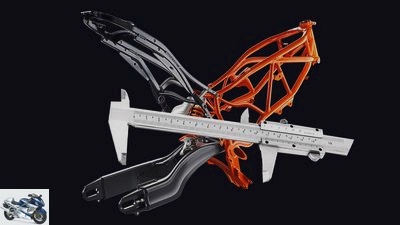 Falling over or accident – accidental damage to the motorcycle

Falling over or accident – accidental damage to the motorcycle
Gone crooked

Accident or Accident? The severity of the damage after a fall depends on many factors. The linchpin for safety and follow-up costs: Is the frame still intact?

Shit happens. At the beginning of August, Rainer Marbach (name changed) rents a Hypermotard 939 from his trusted Ducati dealer in Baden-Wurttemberg. Marbach wants to test drive his dream motorcycle for three days before deciding to buy the Italian cracker.

Falling over or accident – accidental damage to the motorcycle
Gone crooked

It then happens on a country lane on the Swabian Alb near Lenningen: The 27-year-old brakes slightly downhill in front of a sharp left-hand bend at the beginning of an incline – and falls. The front wheel was “folded away in a flash,” says Marbach. The experienced motorcyclist is still wondering whether it was due to the fairly slippery asphalt or the fact that the tires were not yet at operating temperature or there was possibly a trace of oil on the road surface. Fortunately, as he himself says, Marbach gets away with it relatively lightly because he landed on the grassy embankment – the machine is about a meter away from him. The just one month old Hypermotard is – as it turns out after an expert opinion – a de facto total write-off. Reason: The steering stop on the frame on the left is deformed and the rear frame is also damaged.

This type of frame damage has become more and more common since the triumphant advance of the upside-down forks. The reason: Impact energy is no longer dissipated primarily by kinking the stanchions, as is the case with conventional telescopic forks, but is also introduced directly into the frame via the steering head. But even if the motorcycle only falls over without causing a collision, i.e. a traffic accident, frame damage and thus accident damage can occur. According to the legal definition, an accident is “an event that suddenly affects the vehicle from the outside with mechanical force”. Ruprecht Muller from the ADAC technology center in Landsberg makes it clear: “That is why, strictly speaking, a motorcycle is considered to be an accident machine if it falls over.”

Does this mean that a motorcycle after a harmless fall over while standing still has to be declared as an accident motorcycle when it is about to be sold, even though all obvious defects have been professionally removed? Hard to believe, but true: In a country where everything is regulated down to the last icing on the cake, the legislature leaves the assessment of whether the damage is accidental or minor damage primarily up to the owner. A spokesman for the Association of the German Insurance Industry (GDV) said that he does not necessarily have to have expertise, but “use his common sense”. There is no general definition of accident vehicles. However, one thing is clear: the moment the frame is damaged, it is an accident damage, because frame repairs are usually in the area of ​​conflict between prohibited by the manufacturer and so expensive that it is better to replace the frame right away. A typical and obvious damage is, for example, a damaged steering stop. It is less obvious if the frame data is no longer correct due to a fall or a collision or the frame shows cracks. Damage of this kind can usually neither be seen with the naked eye nor detected from the condition of the machine, as our examples above and below show. But because the bottom line, according to GDV, is that every harmless fall over is an accident, it would be advisable to discuss every fall with the buyer. The motor vehicle expert Michael Grob from Fellbach near Stuttgart, who specializes in two-wheeler appraisals, says: “A lightweight super sports car that falls on the exhaust side may end up lying on the road with a warped rear frame.” The possible severity of the damage is also severe depending on the sequence of movements the falling machine takes: “If the vehicle just slips, the consequences are usually less serious,” says the expert. However, when it hits the curb or guardrail, things look very different: “There is then heavy punctual stress on the components at the point of contact, and severe damage is likely.”

And then? Can aluminum bridge frames still be repaired? And how can I be a buyer of a
Protecting a used machine or as a dealer from concealed accident damage when buying or trading in a used bike? Klaus Backhaus, head of an engineering office in Gutersloh, says: “The majority of used motorcycles show slight accident damage.” However, errors in the chassis geometry are quickly identified with a modern measurement process. The expert who specializes in two-wheelers, like many of his colleagues, relies on the mega-m.a.x. system. A frame measurement after an accident serves both as a safeguard when the machine is later sold and for your own safety. “A changed caster or steering head angle can trigger dangerous high-speed commuting,” says Backhaus.

He and his team have carried out numerous motorcycle frame measurements over the past 15 years. “Many measurements show that machines with clearly recognizable accident damage do not necessarily have changes in the chassis geometry.” Conversely, motorcycles that have fallen over from a standstill and look almost intact could have frame damage. “As a rule, all that remains is to replace the component,” says Backhaus.

If swapping the frame cannot be avoided, it will definitely be expensive fun. Depending on the model and manufacturer, you can get spare parts prices from 2000 euros upwards – plus at least around 20 working hours. In view of these prices, one is very close to the economic total loss. And one that, in case of doubt, neither seller nor buyer suspects anything.

Which manufacturers even give repair approvals for motorcycle frames??

As a rule, repairs to the frame are refused. If they are released at all, then only within narrow limits. The tendency is clearly towards a complete exchange.

Why are motorcycle manufacturers so restrictive when it comes to frame repairs?

First, it’s easier to swap the frame. Second, the authorized dealers must also be able to carry out a professional repair.

Can you give typical examples of repair options?

That is not to be said across the board. After all, there is no such thing as a typical accident. That depends on the manufacturer and the materials used or their composition. There are 1000 different options.

What creates clarity there?

A frame measurement and an assessment must be carried out for every accident machine.

If you want to avoid mistakes, you have to put your cards on the table as a seller and, if you are interested in buying, take a close look at the machine.

From a legal point of view, every accident must be stated in the sales talk to protect the previous owner, otherwise the return can be forced. According to the Federal Court of Justice (BGH), the buyer of a used vehicle can in principle expect that it has not had an accident in which more than one minor damage has occurred. In case of doubt, a vehicle is considered to be a vehicle involved in an accident if the damage goes beyond minor paint damage.

One must pay attention to this during the inspection: grinding marks or breaks on the footrests or on the silencer indicate falls. The same applies to the handlebar ends and fittings: If there are scratches visible here, the steering stop must be checked. Deformations or cracks are clear signs of an accident. A repair is usually only possible in the form of replacing the frame, as it is usually not allowed to be welded. Grinding marks on the frame also indicate accidents. The same applies to vertical or lateral runout of the rims and to brake discs with lateral runout.

Be careful with subsequently processed – for example polished – frames or weld seams. They are criticized during the general inspection. If the frame is freely accessible, weld seams in the area of ​​the steering head, strut mount, swing arm mounting and rear rack attachment can be checked. Tip: Experts who specialize in two-wheelers can be found at: www.bdzs.de