California is teeming with talented tuners, all competing to create the ultimate ultrabike or the absolute auto, all of which are the result of a creative mind wondering "why not?" rather than "why?". It is therefore no coincidence that so many major manufacturers of two and four wheels maintain their design studios and engineering workshops in California, because the West Coast is indeed a place where originality reigns, where the improbable becomes reality and where the alternative design of today can become the norm of tomorrow. So much so that we could not imagine that the Feuling W3 cruiser, that its 56-year-old creator, Jim Feuling, launched exactly 20 years ago in February 2001, can be built elsewhere… 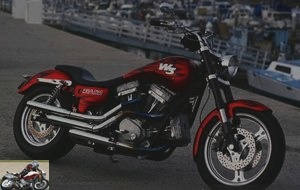 W3 for three cylinders and all in a star! An exception, well almost! Because there was indeed a motorcycle built with a three-cylinder star engine before the creation of Feuling. It was even Moto Guzzi who produced it in 1987. And there were also a handful of special preparations derived from vintage-era aircraft engines. But never had it been possible to buy a motorcycle powered by such an unconventional engine until Jim Feuling decided to shape this idea of ​​the "what ifs" he had while working with Harley-Davidson. on the R&D of their Twin Cam 88 engine launched in 1996. After two years of research and development, the Feuling W3 thus arrived on the market in 2001 at a price of 40,000 dollars (at the time) with the former star of the Dallas series Larry Hagman as one of the first customers of his unlikely, but innovative three-cylinder cruiser. Very unconventional, very cool, in short very Californian.

Feuling’s idea was very simple and was based on converting a Milwaukee engine to provide significantly more straight-line performance, quite profitable. "It would have only needed a dozen new parts," Jim told me when I visited the Feuling Motor Company workshop in Ventura, an hour north of Los Angeles, when I was driving there to test his. creation just a few months before his tragic death at the end of 2002 from pancreatic cancer. One can even wonder why Harley did not take up the idea to expand its range. 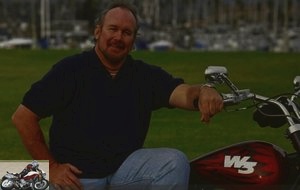 Jim Fueling and his W3

The original W3 prototype mainly used Harley-Davidson engine parts. But Feuling’s production version almost entirely employed components of his own design while avoiding certain compromises to convert this 45 ° Twin Cam to W3 format by cloning a cylinder and its camshaft and rotating them 45. ° downwards on the housings. What the stock W3 had instead was an all-new dedicated engine whose only Harley component still in use was the five-speed gearbox and belt-driven final drive, mated to a reinforced Barnett clutch to handle the extra torque..

The 2.5-liter OHV engine was designed to reach a top speed of 238 km / h when the switch tripped at 5,500 rpm, when the Feuling transmitted its peak power of 154.4 horsepower to the huge Avon 200 rear tire, despite a low 9.5: 1 compression ratio and relatively smooth cams. And after properly riding it, I believed it… 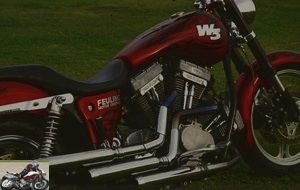 To create his – unmistakably strange – but super-fast acceleration W3 engine, Feuling ditched the cam chain drive in favor of his own gear-driven triple camshafts. This not only made the crankcase design more compact, but also reduced friction to gain 6 horsepower, combined with chrome-molybdenum steel rocker rods. The cylinders and cylinder heads were also Feuling’s own, with a design incorporating 51mm intake valves mated to 38mm exhausts and powered by a trio of 39mm Keihin carburetors. Gill Electronics, UK, supplied the Hellfire electric starter. If he had lived longer, Jim Feuling could have continued the development of his motorcycle with an electronic injection system on which he was working with the Australian company MoTeC. 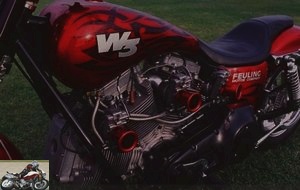 Left side, the red intake horns recall the presence of the carburetors

The Feuling W3’s "square" engine dimensions were 101.6mm in both directions, tripled, for a total capacity of 2,472cc with forged pistons mounted on the three distinctive CrMo steel connecting rods. These carried over to a design common on aircraft star engines, with a massive central rod for the central cylinder which operated alone on the plain bearing main crankpin, but also incorporated two protuberances acting as connecting pins for the cylinders. front and rear. The set was very solid, although it required a redesigned oil pump with 60% more recovery capacity than the Harley, while still maintaining the single-axis format of a Milwaukee crankshaft. It was therefore just as thin, but significantly more powerful. 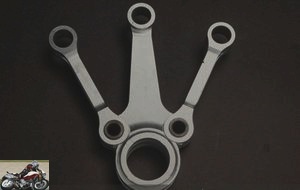 The characteristic connecting rod of the W3

This performance-matched engine was mounted in a dual-cradle frame built by Kraft Tech to Feuling’s design, incorporating solid engine mounts at the rear and a rubber mount at the front. , with a swingarm with double shock absorber specially reinforced to withstand the massive torque forces of the W3 of 236 Nm from 3,000 rpm. 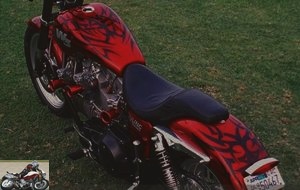 The Fueling W3 remains quite compact

The rest of the bike was ultimately fairly conventional in the California prep world with a beautifully hand-modeled 19-liter aluminum fuel tank by Rob North, a 43mm Storz / Ceirani inverted fork open at 30 °, two progressive shocks at the rear, two 292mm front brake discs clamped by Performance Machine calipers and a pair of aluminum alloy rims from the same manufacturer. 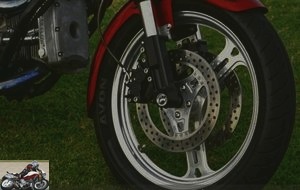 Braking is provided by Performance Machine calipers and 292 mm discs

These were fitted at the front with a 19-inch Avon Venom 110/90 tire and a 200 / 60-16 AM23 rear. This tire mismatch probably explained the Feuling’s hesitant handling in mid-range curves when you’re on the angle and think twice before twisting the grip. The W3 likes to squirm when completing a turn maneuver and the steering is downright heavy due to the cruiser’s very open steering and the 1.753mm long wheelbase, but Jim Feuling’s goal was to ride a much shorter engine in a more compact and sporty chassis:

I want to build a 200 kg three liter roadster with this engine. It would be a nice motorbike that we could get out on and REALLY have fun ! 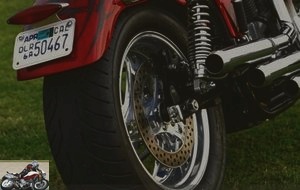 Very fair, because with the W3 that I drove in its final version, it was no longer a question of bypassing this bend, counting 3-1-2 (the order of the cylinders firing) and hanging on !!

Throwing the Feuling W3 2500 on the throttle at a red light or cruising it on last gear while cruising on Freeway 101 as it leaves Ventura converts you immediately as your arms tear with the force of a hurricane and you hang on. frantically on the handlebars, suddenly realizing that the riding position is very extended and the wheelbase so long. Indeed, a 2,500 cm3 engine with 236 Nm of torque, with more than 150 horsepower at the rear wheel and a unique three-cylinder rhythm make the Feuling W3 let all other drivers, on two or four wheels, breathe your dust. as you battle the laws of physics by trying to stay on your mount. The W3 is a motorcycle that stripped down, a true two-wheeled street dragster barely civilized for the highway and which 20 years ago set new standards of acceleration in commercially available Powerbikes.. 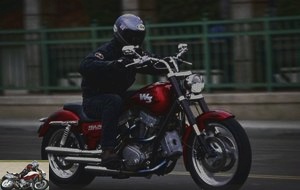 The 236 Nm of torque available from 3,000 revolutions provide lightning-quick acceleration

Because as soon as the throttle is opened from 2,000 revolutions / minute, the Feuling is propelled in the manner of these competitive dragsters which make the rubber smoke at the slightest acceleration. We then find ourselves doing involuntary burns when the big Avon tire begins to turn, then suddenly grabs the asphalt, even managing to raise the front a little despite the wheelbase worthy of a truck. Suddenly, we headed straight for the car that seemed a mile ahead. So you have to slow down using the small brakes which are still effective enough to slow the 268 kg dry at high speed. We pass the car and start the exercise again. Phew, what an explosion !

It is the ultimate motorcycle for standing starts, a machine that a Suzuki Hayabusa or Kawasaki ZX-12R would be unable to follow in a straight line. The W3 delivers truly fierce acceleration, towing up to the 5,500rpm red zone and gaining more power when the CDI launch control commands the engine to stop revs and you need to shift gears. This is done with a reasonable level of effort, the movements of the clutch lever and the shifting are quite heavy, but acceptable. And we start the whole process again. Impressive ! 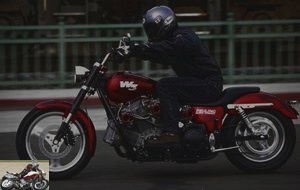 The W3 is a real sensation machine

But don’t think that this is just a smoldering tire hotrod that can only work with an on / off switch. Paradoxically, after starting the W3 engine and admiring the characteristic and singing exhaust note of the three superimposed short silencers, imagine a more sonorous and high-pitched version of a Desmodue, the Feuling turns out to be surprisingly forgiving and behaves of course. Highway. The engine is a bit smoother than a smaller Harley V-Twin thanks to its better primary balance. It idles smoothly without the slightest shake, click or noise that has so far been the hallmark of American motorcycles. Its recovery at low speed after a stop at an intersection is quite clear, but not brutal, hard to believe that these three red cones on the left side are associated with carburettors. Keeping up with the flow of traffic scrupulously within the 40 mph (64 km / h) limit under the watchful eye of a police patrol is no hardship. Real-world driving is thus shown to be complete, as any BMW cruiser adopting the same W-engine format could have been too…. 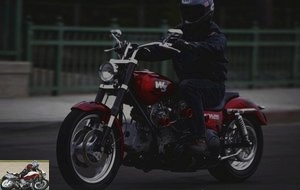 Braking and handling remain behind on this extraordinary cruiser

The Feuling has demonstrated all the advantages of this engine format since you only need to work with your right wrist to transform a motorcycle into a rocket capable of escaping the V8 of police cars, well until you get to a bend where the cars would catch up. The Kraft frame is fairly stable in a straight line, although the handlebars wiggle a bit in the hands as the front wheel becomes lighter under heavy acceleration. The suspension package is still good enough to allow for a few quick cornering attempts, but with such a long wheelbase and inevitably low ground clearance, it clearly cannot be called sporty. Although drag racing is just a different motorsport….

Driving the Feuling W3 makes one imagine that once Jim Feuling had started production of his first series, he would have found the time to work on something identical, but different, always with a W3.

I am currently studying a few other versions on the same theme. What we have here is a 45 ° V-twin with another added to make a full 90 ° angle, but you don’t have to be a genius to figure out that you can also start from there. ” a 90 ° by adding a third cylinder between the two existing ones ! 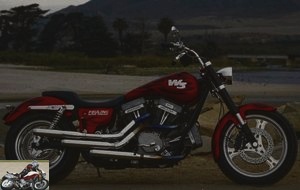 It could have been a desmo W3 with a Bolognese engine, or a Moto Guzzi with a transverse W3 and shaft drive … unfortunately Jim Feuling died before making his decision. And the great manufacturer who could have created this motorcycle finally made the choice not to manufacture it. Pity…

The W3 at BMW Motorrad

In 2014, BMW Motorrad patented two separate variants of the W3 format, both apparently air-cooled, giving a clean and necessary visual appeal to a cruiser. This was in line with market expectations, while allowing a larger capacity engine to be installed in a smaller space. Compared to the Feuling W3’s 90 ° angle between 1st and 3rd cylinder, the BMW layout featured a much tighter 75 ° format for the first patent and 65 ° for the second. These were ultimately much closer to the configuration of a conventional V-Twin. As we now know, BMW chose to use a more classic format for its big comeback to the cruiser market last year with the R18 Big Boxer, but who knows what might happen in the future. ? 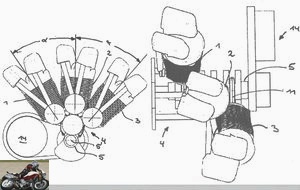