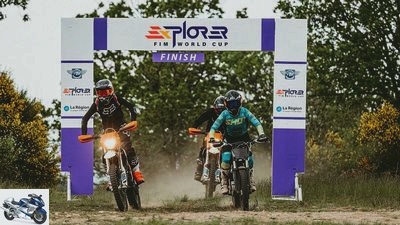 A new off-road series for electrically powered enduro motorcycles is to be launched from 2022 under the patronage of the FIM world motorcycle association.

Under the title E-Xplorer World Cup, according to the plans now presented by the FIM, ten teams with two drivers each are to compete, with teams being obliged to sign one man and one woman each.

According to those responsible for series production, the first racing season could start as early as spring 2022. Five runs per season are planned. Natural slopes or even terrain in urban areas are being considered.

The aim is to ride on purely electrically powered enduros with a maximum weight of 130 kilograms. An extensive test program is currently underway, in the course of which the requirements for possible manufacturer commitments are also being checked.

The organizers also announce that there will already be initial inquiries from well-known manufacturers and well-known off-road drivers. The organizers plan to announce further details in the near future at a global launch event. Then there could possibly be a first draft for a racing calendar. According to the organizers, events in the USA and / or Switzerland are conceivable.

The driving force behind the E-Xplorer World Cup is Valentin Guyonnet, who has more than a decade of experience as part of the World Motorsport Federation and acts as the organization’s CEO. He is supported by Carina Munte, sports marketing and event developer, as COO. Further support comes from Alejandro Agag, CEO of Extreme E and Chairman of Formula E and the E1 series, and Eric Peronnard, promoter and sports advisor for ESPN X-Games and Red Bull Straight Rhythm.

What do you think of electric motorcycles in off-road sports??

I find it exciting.

Doesn’t work at all.

Enduro races with electrically powered machines – that is the plan behind the E-Xplorer World Cup racing series, which could start as early as 2022.