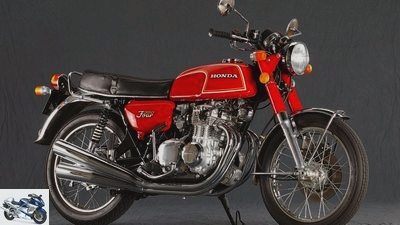 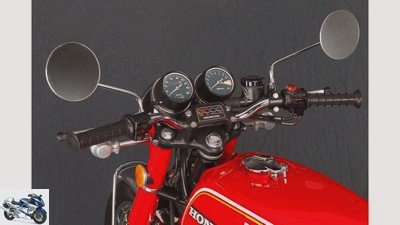 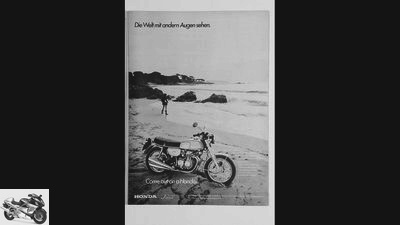 2/19
The Honda advertising was right: Since the CB 350 F, one had to see the four-cylinder world with different eyes. 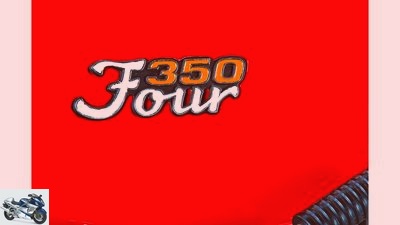 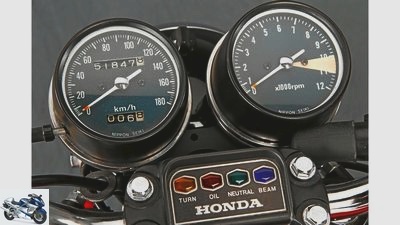 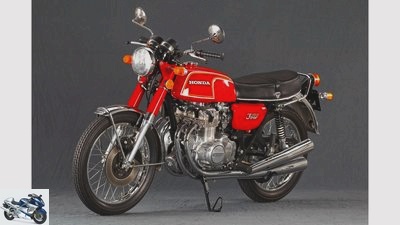 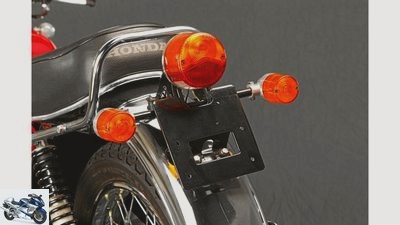 6/19
Well-rounded: the taillights and indicators were not square and square meters in 1972, but the indicator lenses were very deep. 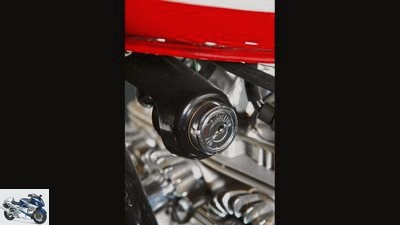 7/19
Banished from the cockpit, the ignition lock ekes out its existence on the left under the tank, mounted on its own small boom. 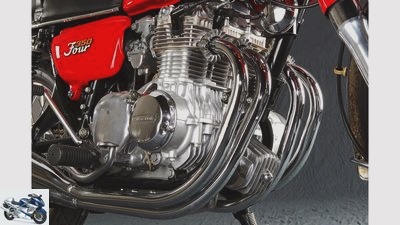 8/19
A four-cylinder straight out of a designer’s picture book – with clever solutions, as evidenced by the oil filter housing that is neatly fitted into the fork of the frame support. 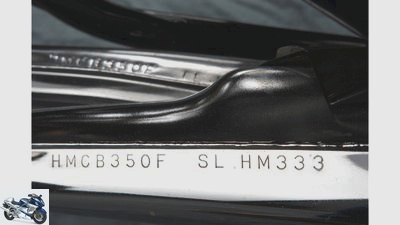 9/19
Everything original and in top condition, as the stamped part number in the beautiful four-in-four exhaust system proves. 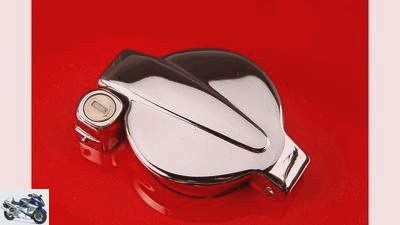 10/19
Completely wrong: the tank lock treats itself to its own spot next to the tank lid instead of being integrated into it. 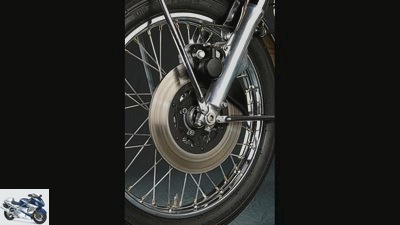 11/19
The cover of the brake disc does not protect against moisture, but the effect of the brake is convincing. 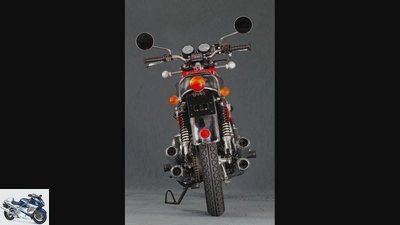 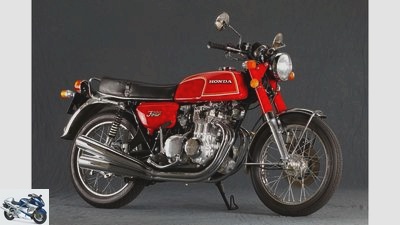 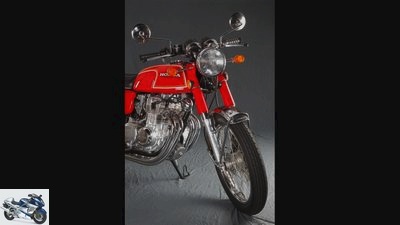 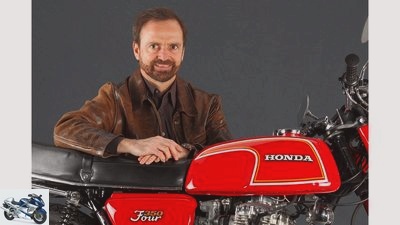 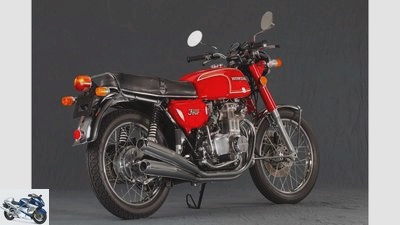 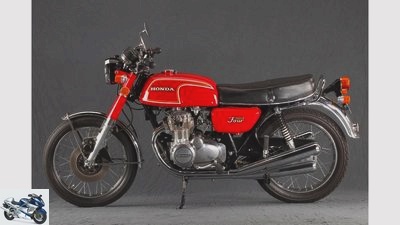 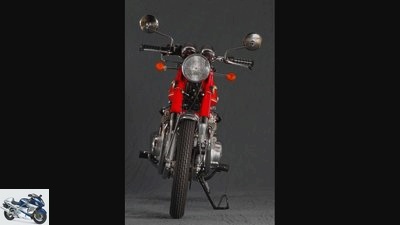 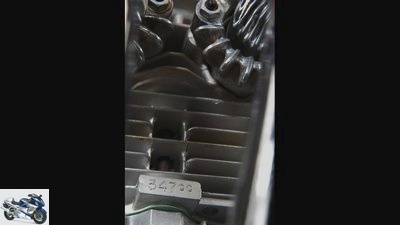 Honda CB 350 Four in the studio

With the Honda CB 350 Four, Honda rounded off its four-cylinder range at the beginning of the 1970s. The smooth-running barrel organ pleased with its charm and handling and has achieved cult status to this day.

Anticipation is the greatest joy, and sometimes the best comes at the end. It remains to be seen whether it is the best among the first Honda four-cylinder engines. But one had to wait the longest for them. After the 750 and 500 cc saw the Honda C.B 350 Four finally came into the world of two-wheelers in 1972 as the last of the trio.

But the Honda CB 350 Four also has a lot to offer. As stated in the first test back then: Honda had “built a motorcycle that some drivers dream of: technically playful, classy, ​​petite, with sporty performance and manageable”. Everything applies. With the dry 170, ready-to-ride 190 kilogram bike, even less powerful pilots got along, the playful handling beguiled practically every rider from the first meter. The always praised stability of the chassis ennobles the design of the frame – a combination of pressed sheet steel parts, connected to the front main tube, which divides into two beams. The too hard rear struts and their poor damping were criticized.

The heart of the Honda CB 350 Four, the four-cylinder, is not simply, as one might assume, a scaled-down version of the well-known 750 or 500 series, but a new design. Only designed with a slightly long stroke, the small four-cylinder may need high speeds to develop power, but it can also cope with it without complaint. Even at speeds in the red range from 10,000 rpm, the piston speed is in the uncritical range. Little goes below 6000 rpm, between 7000 and 9500 tours, if necessary the music also plays in the five-digit range.

The crankshaft has five slide bearings, and the connecting rods also run on slide bearings – the best prerequisites for low-vibration, smooth running. The Honda CB 350 F has a number of technically complex solutions to offer, such as the four 20 mm Keihin carburettors with the same slide control system as the 500. The throttle slide is evenly controlled via a linkage, which is operated desmodromically by two cables. To work on the carburettors or to adjust the valve clearance, you only need to remove the (too small) 12 liter tank above the main frame pipe. This is easier with the 350 because, unlike the 500/750, there is only one fuel line from the fuel tap to a distributor between the central carburetors, with the float chambers all connected to one another.

No zero number: the original odometer reading was not reset.

Helmut Schindler, the owner of the picobello photo bike, will certainly not have to screw or adjust a lot in the near future. The Honda CB 350 Four has undergone many years of extensive restoration by professionals and has only run a good 500 kilometers since it was completed in 2003. You don’t see the total mileage of almost 52,000 kilometers on the Honda – all parts have been revised or renewed.

The overhaul of the four-cylinder was carried out by specialist Roland Eckert, the engine could hardly have come into better hands. In 1979 Schindler acquired the machine (built in 1973) for an affordable 1700 marks, with just over 20,000 kilometers. In the years that followed, the Kelkheim-based driver added around 30,000 more kilometers before he decided in 1994 to have the CB 350 Four completely restored.

The goal was clearly defined: the 350 should be 100 percent as good as new. The costs initially calculated for this were already in the five-digit D-Mark range. At first no one could have guessed that it would last until August 2003, but neither does the 70-year-old bother. There were always enough other motorcycles ready to drive. Helmut Schindler also does not contest the fact that the total costs ultimately accumulated represent the value of a suitably equipped new small car. He wanted his Honda CB 350 F to be perfect – and that’s exactly what it became.