Around its flagship, the legendary GL1800 Gold Wing, Honda has developed a very varied family of road cruisers in just a few years. Last year, a superlative bagger named F6B, devoid of top case and windshield, displays a more stylish and dynamic aesthetic. Greatly appreciated in France, the Gold Wing has indeed sold nearly 600 copies in 2013 while 200 F6B were also sold. Thus, France represents nothing less than the 2nd market in the world for these emblematic machines. Note that 20% of these sales originate from passenger transport. 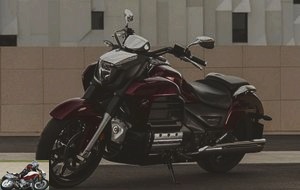 The manufacturer then expanded its offer in the segment with more accessible machines, CTX 700, 700 N and the innovative CTX 1300 at the start of 2014. Finally, the ultimate variation around the monumental 1800 cm3 flat 6-cylinder, Honda is now daring to make a power bike. Called F6C, it is the culmination of the new custom-cruiser from the Hamamatsu firm. We will remember this name, already used in 1996 to evoke a cruiser already based on the Gold Wing of the moment. To take the measure of this extraordinary and bare creation, two days and 400 kilometers of sunny winding roads are not too much. Less would be sin. And for this endurance journey, we are accompanied by Sebastien Gimbert, official Honda rider in the World Endurance Championship.. 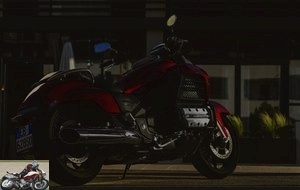 The novelty includes, of course, many elements of the queen of touring, but its powerful clean line would almost make you forget its touring origins. Only the essential is preserved and put forward thanks to a minimal covering, allowing the major advantages of the machine to express itself. To which we will add a major: the custom weighs 341 kg or 80 less than a Gold Wing ….

The whole makes up a power cruiser of great elegance, racy and sporting a certain sportiness. Combining modernity and classicism, the Honda evokes a Jimson locomotive such as the Twentieth Century Limited or the GG1 and S1 dear to the Pensylvania Railroad. The games of contrast are important, combining dark tint and satin metallic platinum or chrome surfaces. 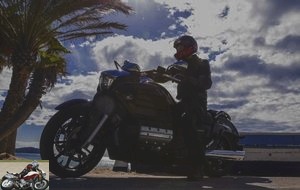 Less outrageous than a confidential NRX 1800 RUNE VALKYRIE of 2004, the F6C imposes a magnetic presence. His Cyclopean gaze, wearing a chrome (plastic) cap, seems to scrutinize the world with an air already superior. This cybernetic eye, made up of LEDs like the entire lighting system, is framed by latticed gills. The whole rests on a massive classic 45 mm fork, sheathing the upper part and seems encrusted in broad shoulders. These massive scoops surmount the imposing side radiators in front of the tank. Adorned with a shiny (plastic) plate incorporating the hatch hiding the filling opening, this tapered 23.5-liter container runs towards the large saddles. The passenger seat, thick and wide, is flanked by massive grab handles. These bend and bend while plunging on the stern that a little sharply concludes a horizontal fire bar. 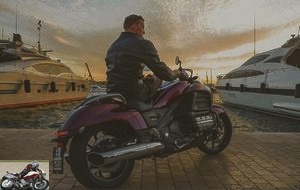 But back to the main thing. Because these volumes only respond to those of the flat-six 1832 cc. True sensation factories, the unit features long satin-finished housings and takes place in a double-beam aluminum frame, also contributing to the rigidity of the whole. Its dantesque breath flows into two long chrome silencers, each sporting a triple outlet. These flutes have been modified to enhance the sound of the Honda boiler. Likewise, the air box is reworked. 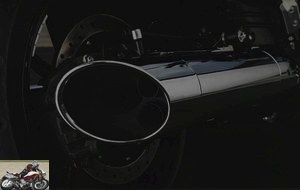 The cycle part does not change much, the F6C stretching slightly more. The caster angle increases by 0.35 units to 29 ° 5. The absence of fairing influencing the stability, the distribution of the masses has changed either front-rear: 48% -52%. Now clearly visible, the single-sided arm integrates the shaft and cardan transmission. Its oscillations are entrusted to a shock absorber adjustable in preload. The suspensions have been recalibrated due to the lower weight, but a more dynamic behavior. The gearbox has five gears, unchanged. 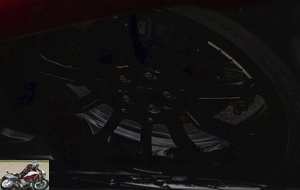 Coated in a black tint, the 10-spoke rims receive Dunlop D 256 and 252 4F wraps. The steer wheel changes to 19 inches, raising the nose of the machine. Their rotation is stopped by two front discs of 310 mm (296 mm for the Gold) pinched by Nissin four-piston calipers, because if the weight is less performance is increased. A 316mm rear element is clamped by three pistons. No combined system, but ABS is present. Finally, crankcases protect the flat six in front of which additional lights can be mounted. We can also mount a sissibar and different windshields. 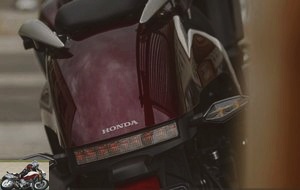 The burgundy color gives a very classy touch, but is a bit dark. It is a pity that electric blue is not imported to us. Remains the black color, efficient and adapted to the brute force released by the F6C.

A new rear frame further lowers the saddle height to 734mm while the leg arch does not exceed 300mm. Something to land without fear on the comfortable pilot seat. These values ​​place it halfway between those of the Goldwing (740 mm) and those of the F6B (725 mm). The legs, reasonably separated by the tank devoid of flatness, naturally find the sheathed footrests and the hands fall on the handles. We notice their unusual diameter, but also a passable finish. Same feeling with the levers, wide, but not adjustable in spacing. Massive, hydraulic jars would also have deserved a less strict profile. More efficient, the commodos adopt generous buttons, with a warning placed on the right.

The V-bar handlebars plunge towards the upper crown, surmounted by a fully digital instrument block. The indications in white on a black background bring a pleasant modernity. Traditional information is available, but we regret the absence of a gear indicator engaged. Tachometer, barograph tachometer, clock, fuel gauge and two partials fill the screen. It’s efficient and readable. 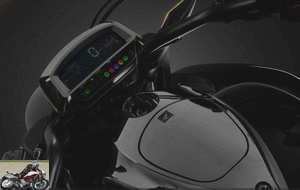 The finish is excellent, although it uses too much plastic. Headlight cap, tank plate, the light hatch of which leaves no doubt as to its composition, instrument paneling…. Sorry about such an achievement. Fortunately, the integration of cables and hoses does not suffer any criticism..

It’s time to bring the Japanese loco to life. A rapid cough launches the horizontal mechanical cathedral. This inimitable sound seems to me more successful than that of the BMW K 1600 GT. A little too discreet, but more velvety, it matches the racy look of the F6 Custom. 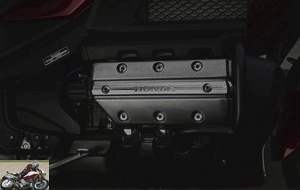 Despite a substantial mass, we quickly take our marks on board. At very low speed, the front axle shows a certain heaviness which disappears after 10 km / h. Like that of her keeled sisters, her balance is impressive. And what about the flexibility of its engine? It is quite possible to keep the last report in town, as elsewhere. The flat resumes at 750 laps, below its idle speed, from 20 km / h! The first, short, however, soon warned the pilot about the capacities of the six-cylinder core and its almost two liters. The city would quickly become narrow for reasons other than the size of the Honda; its 2,473mm long and 942mm wide does not make it an urban queen. However, the machine steers well and is easy to maneuver for such a bulk. Her thing is the other dimension: that of sensations. Designed for large spaces, the F6C is just waiting for an order to project you into the distance. 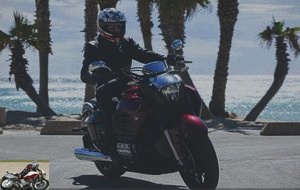 The beast is spinning fast. Springing towards the horizon, the custom takes you with ardor towards the legal limit. See "a little" more. A fiery breath bursts from his bowels as his large chest pushes back the air streams, allowing high-speed forays without much embarrassment. 85 kW (114 hp) at 5500 rpm seems little for this Leviathan, but nevertheless guarantees remarkable performance. The double hecto-kilometer-hour is reached without thinking about it. Whoops…. what if we believed in peace? Not easy when the beauty asks only to slip away. At 130, the protection remains very correct for this type of vehicle, in particular at the level of the legs, perfectly sheltered behind the radiators. An optional windshield should turn the dragster into a muscular traveler. The block purrs, without vibrations, at 3,250 turns, for a red zone at 6,000. And takes 40 km / h per 750 turns. Clearly, if the highway becomes a take-off runway, you will lose your license and machine if you get caught. To ride happy, let’s ride hidden on the secondary network. 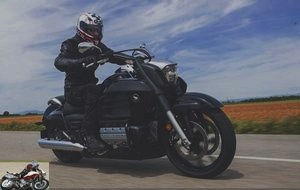 The real strength of the F6C is precisely that of its engine. Much more than its power, its 16.7 da.Nm of torque at 4,000 revolutions-minutes are a permanent delight. The significant weight loss transforms this custom compared to the Gold and F6B. Thus, the gear ratios are unchanged, but on the intermediaries, the Honda is an orbital catapult, seeking to make you leave gravity. In fact, we don’t keep our seriousness for a second and the only attraction is his. 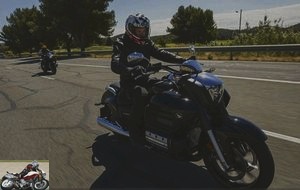 Riding this stylish locomotive, we appreciate a generous enough ground clearance to hinder only moderately the train of your desires. On large curves, the stability is excellent and the custom rocks from one side to the other, showing great rigidity. Pins will be approached with more caution and anticipation. It is only to better spring from it and martyr the gum, put to the test.

The 180/55 rear envelope contributes to the agility of such a monument. It also contributes to comfort on board. The suspensions work together to provide optimal damping in all circumstances, swallowing all the defects of the bitumen. A racing Gold Wing of sorts. 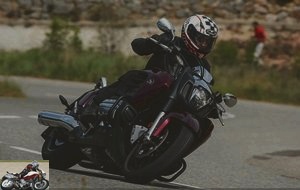 At a very lively pace, it will be necessary to keep in mind the important mass. If the brakes are up to par, the tight ferrule downhill will require a little more hold. This will remind you that it is possible to stroll aboard the F6C. Of course, one would almost forget that the machine is tasted with the landscape. The prodigious softness of its six cylinders then underlines your evolutions with an incomparable smoothness. The absence of a gear indicator is then less painful than at a sustained pace. Sometimes showing a certain inertia, the selection can also lack precision. 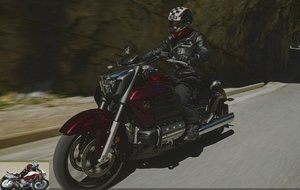 At the limits of reality, the balance of this titan joins that of the other flat six representatives. Rigid, obvious, the F6C benefits above all from a significantly reduced weight. Both in town and on rough roads, the machine requires very little effort to be placed on its path.. 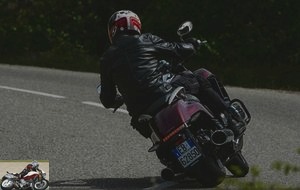 Powerful, enduring, the braking is in phase with the dimensions of the power custom. The front calipers barely lock the steering, and the rear element shows unusual vigor. it ideally serves the Honda when cornering, seating the machine smoothly. 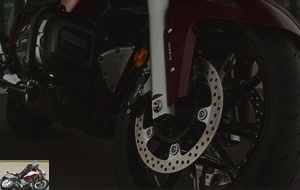 At first glance, we wouldn’t necessarily think of accumulating the kilometers aboard a naked custom. Yes, but the F6C is not just any cruiser. These benchmark touring genes not only give it superlative comfort, but also give it the ability to ride long and far. At least solo. If by chance the duo tempts you, you will have to go through the purchase of a sissibar in order to reach their destination together. Likewise, a front air deflector will optimize your comfort. Honda would probably benefit from offering rigid suitcases for its creature. Also note the existence of different accessory packs (see end of test). 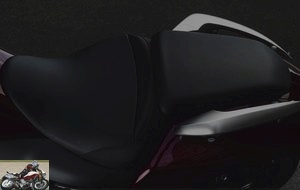 Lighter, but more conducive to muscular acceleration, the F6C should stabilize its thirst at 7 liters per hundred kilometers. Either a range of 300 km. A point to check. 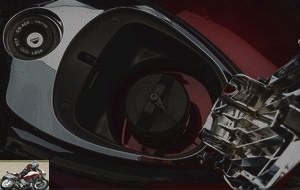 Seductive, the Honda F6C is a sculptural machine, with unparalleled dynamic elegance. Its imposing but fluid stature charms at all times, to the powerful rhythm of its multi-cylinder block with intoxicating melody. We regret all the more the details of raised finishes, unworthy of its status. Although intended for less road use, the custom is at ease off the coast. Without giving it claims that it refutes, the F6C really allows you to go far. 250 kilometers of small roads, chained together, did not appear to us to be trying.

A successful combination of elegance and sensations, comfort and dynamism, the Honda F6C is a seductress to the power of six. Take this train of desire, its charms will take you fast and far.

The technical sheet of the Honda F6C