Appeared forty years ago (already!), The Honda 1000 GoldWing was the first behemoth produced in large series. A limousine on two wheels, targeting a very clientele … Mautaumobile ! 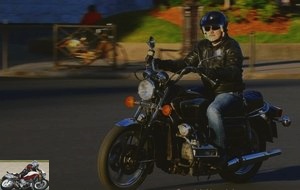 Since 1972, Honda has been working on the development of a very grand touring motorcycle, intended to seduce the American market.. The considerable success of the CB 750 hinted at a bright future, remained to make the object respectable to motorcyclists of the New World. In order to achieve this, nothing better than a machine borrowing a lot from automotive technology. Shoichiro Irimajiri, project manager, after working for a long time on a six-cylinder engine, judged on reflection to be too expensive and bulky, finally opted for a 999cc flat four, water-cooled, single overhead camshaft controlled by toothed belt. 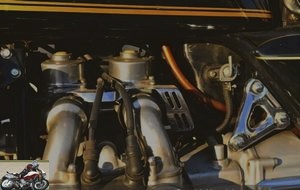 Flat like a Basque beret, gearbox under the engine, timing by toothed belt … The block of the Gold Wing is very automotive inspired! But the affixing of crankcase guards is an essential investment given the vulnerability of the engine….

Other rarities of the time include rear disc brake, fuel tank located under the seat (the "fake" can hiding the expansion tank and a small storage space), an electric fuel gauge and a universal joint. equipped with a transmission damper. And to perfect the appearance of wisdom, a "4 in 2" with particularly pot-bellied endings. 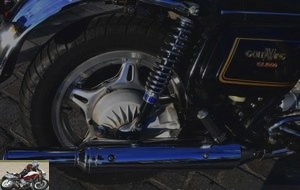 Exhaust as discreet as the gimbal. A real flying lurking miss Gold Wing !

In short, a machine requiring respect

The model tested, type K3 from 1978, has some modifications compared to the first vintage, including aluminum rims on which five steel spokes are riveted (Comstar type). 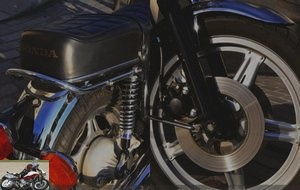 The instrumentation is enriched with a voltmeter and a coolant temperature gauge placed on the dummy tank, the engine has been tamed to be more available at the bottom, the pots are fully chromed and the frame has been reinforced. 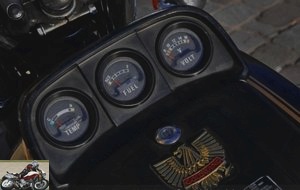 Console on the tank

The console on the tank, a new asset of the Gold Wing released in 1978…

The center of gravity placed very low thanks to the sleight of hand of the tank allows a relative maneuverability given its overweight. However, 300 kilos of metal does not move without the slightest effort. The Gold is not the ideal tool for sneaking around town, but the gimbal knows how to be discreet and the engine does not heat up…. 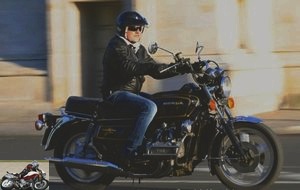 Thus, in town, the Gold, despite its weight, does quite well, thanks to its very low center of gravity….

The Gold sees the road as an ocean liner. Bow forward, nothing stops it. It does not tire its pilot and has enough reach and torque to impose its carcass in all situations. On the other hand, it only appreciates abruptness very moderately and adapts very well to legal speeds. Attacking on his handlebars seemed almost incongruous. This is a limousine and it is best to treat it as such. Between poor ground clearance, undersized fork, rubbery frame and anemic shocks, no need to imagine teasing the stopwatch. The handling of the GL 1000 lacks rigor, even offering its rider a few rodeo tickets, as soon as it begins unpredictable sessions of guidance above 160 km / h…. 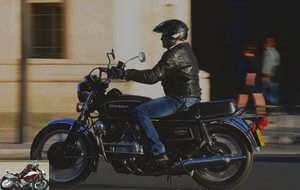 It is not the ideal motorcycle to attack, but what comfort of use…

If the absence of all protection does not make the GoldWing a queen of the highway, it makes up for it by its engine behavior close to Swiss watchmaking. The flat does not vibrate, remains silent and seems tireless. An appreciable comfort if one remains within the framework of the speed limits. At higher speed, the bike breaks up and the large handlebars do not help matters.. 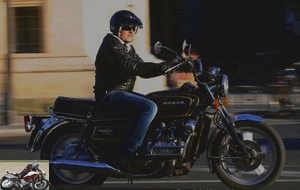 Comfortable, perfectly raised saddle, grab bar, ideally positioned footrests, the passenger is undoubtedly pampered. And to complete the picture, it turns out that the Gold holds its course better with two people on its back! Naturally, the impression of traveling in first class is reinforced by the total absence of vibrations.. 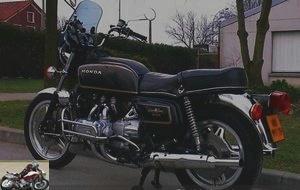 The original grab bar sometimes disappears and yet it is an object that has become rare because in the past it was often sacrificed to make room for a luggage rack..

The good will of the three discs manages to temper the ardor of the pachyderm. On this K3 model, the pancakes have been surfaced with a different alloy from the first vintage. Fortunately, the K1s struggled to stop in the event of rain. This anomaly was, however, very quickly rectified..

In the end, the two front discs are not superfluous to slow down the 300 kilos of the machine !

Maintaining a stable and moderate pace, the 1000cc GoldWing will consume little more than seven liters of gasoline to cover a hundred kilometers. In case of compulsive spinning of the throttle grip, add one more. 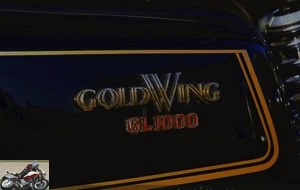 Reminder on the sump. However, we do not risk forgetting the Gold Wing ! 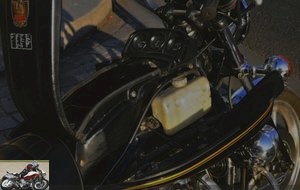 The false tank opens in three parts … But does not become safe, all the space is already taken !

Introduced in 1974 and available in dealerships the following year, the 1000 GoldWing was the first production motorcycle powered by a liquid-cooled four-stroke four-cylinder. His career ended at the end of 1979, proud of his 4723 copies sold. The “GoldWing” concept continues to this day with a six-cylinder 1800cc engine! In France, the Honda GL 1000 will know only a few developments, from the K1 to K2 models, the K2 having a pair of helmet holders and a gimbal grease nipple more than its predecessor. The 78 K3, on the other hand, stands out for its Comstar rims, an instrument console on the tank, a redesigned saddle, an engine with new timing diagrams, a reinforced frame and better shocks. This vintage loses the back-up kick formerly hidden in the false tank. Rarer, a “LTD Jubilee” version, daubed brown / black / gold, was stealthily released in 1976 (300 copies in all). A K4 will show the tip of its headlight in 1979, identifiable by square turn signals, a pair of black levers and a new taillight. It will be the last of the line, very quickly replaced by the Honda GL 1100 D. 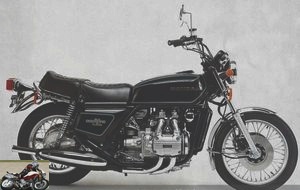 The spoked wheel model does not lack style either. !

The pots, fragile and most often corroded by rust, have become impossible to find. On the other hand, many parts are still available in the network. The exhausts are rebuilt and internet browsing makes it possible to unearth the impossible through clubs, especially American, country in which Gold met its best scores. Overall, the GL 1000 is a reliable motorcycle, don’t worry too much about billowing smoke when starting, chronic flattened engine disease. Beware of carburettors, very susceptible to adjustments and weak in their composition. It is perfectly possible to completely restore a Gold, beware all the same, alu and chrome to be redone quickly increase the price of the work…. 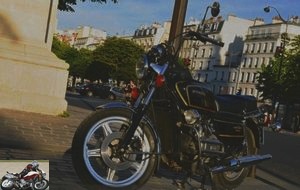 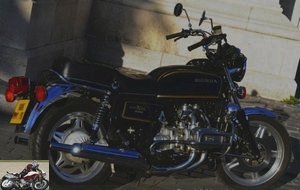 The liner, kept afloat reasonably, brings many satisfactions. First of all, the total absence of vibrations, the silence of operation, the excellent positioning at the controls and the general comfort on board. You just need to break it down to drive it perfectly. A lot of fun if you don’t upset her. A very worthy lady enduring ill-familiarity or saucy jokes from the (double) guardhouse. The beautiful, moreover, meets a great success with the youngest always quick to give her the best place. A first Gold invariably inspires respect and consideration. This motorcycle marked its time and its aura will never weaken. Become queen in collection, she can still proudly show off her crown while riding daily.

The technical sheet of the Honda GL 1000 GoldWing