More than the stop and start equipment of the new Honda PCX 125 scooter, it is the price that we retain of this rewarding scooter and very dynamically developed.

€ 2,390. It is hard to believe it. After asking the press service of the world’s leading manufacturer to be able to test the new 125 equipped with a Stop and Start system, out of curiosity, we quickly skip technological developments on our handlebars. And we only retain the price of the PCX, frankly well placed. 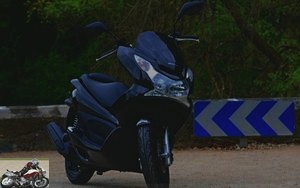 Moreover Honda does not do a lot of handling the machine. You can also switch off the system or activate it by simply pressing the right handlebar switch. "And it only works once the engine is warm" warns the mechanic at Honda Europe headquarters. Paradoxical. You have to wait until the engine is warm to hear it stall at the slightest light or brake a little long: about four seconds. As soon as we put the gas back on, after a very short response time, almost impalpable, the engine snorts again to start again.. 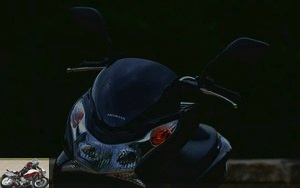 The PCX benefits from a new 4-stroke engine, single overhead camshaft, with liquid cooling integrated into the engine, as well as a brushless starter-alternator, introduced on the Zoomer. This system has two functions: starter then generator to power the ignition and lighting with the advantage of silent operation at start-up. 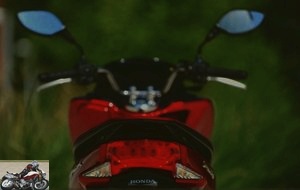 On the look side, the PCX is adorned with a double lens and a tinted screen. The saddle incorporates a backrest for the rider and offers a compartment to accommodate a full face helmet. A glove box completes the whole, integrated into the thickness of the apron.

Left behind the system that should help consume less, Honda promises a little more than 2l / 100 km while we have measured a little more than 3.3 liters thoroughly, we focus on the dynamic qualities of this small scooter. And it’s very nice. The starts are straightforward, the accelerations are voluntary, only the top speed is below an S-Wing, but it must be said that the model of our test only displayed 50 small kilometers at the grip. And gave up arms at 108 km / h, alone or in pairs, on the very readable graduations of the counter. 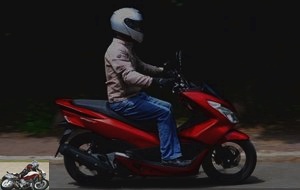 Beyond this detail, we find the whole rather rewarding. Lacquered black or white, the PCX flatters the retina. Its reduced size is only felt at the level of the protection of the helmet. A less cut bubble would break the line of this trendy little scooter a bit but would remedy this pitfall. Because along the way, we do not find much to complain about. The chassis is very efficient, the scoot takes an angle without flinching in a very reassuring feeling of balance. And the braking, in addition to being easily dosed, is as enduring as it is effective. If it doesn’t have ABS, it has front / rear combined braking. This little scooter is incredibly easy to handle. He almost turns his handlebars perpendicular to the road. A treat for U-turns. 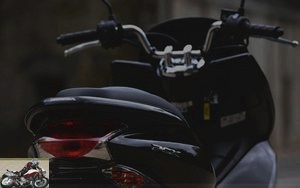 Far from urban centers, it is wedged by a return of the saddle that the pilot is nested in the bulk of the machine, his legs folded by the apron which is not a flat bottom. At this level, we find the gas hatch that is controlled from the neiman by a switch such as the opening of the saddle. Finally a fault. The hinge of the two-seater is not really the best. It nods a little laterally even if you easily place a helmet and a few more trinkets. The regrets are added on the dashboard where there is no trace of a watch on the half-analog half-digital counter. But you have to be choosy because the whole has a small square gauge as well as two totalizers, total and partial. 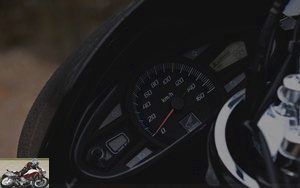 On the handlebars, once again, Honda has made chic from cheap. Without trim, the hangers are simply chrome-plated and let the cables slide live into a perfectly round, chrome-rimmed hole. It is far from shocking because rather successful. Delivered in the eyes of the competition, only a mechanic made a remark from the workshop: "the mechanic who will have to readjust such a scooter after an accident will have to have fun". It is true that the fairing is particularly well integrated in its black lacquered livery. We do not see the joints between the different pieces of fittings. And it is obviously the most impressive for this 125 displayed at the low-cost price of 2.390 €. 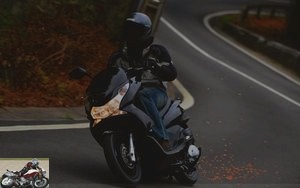 More than a new scooter in the competitive 125 market, Honda brings with its image and know-how a real answer to those who find the 125 too expensive. There, for a very good price, they will have Honda wings and a scooter which is far from being a cheap machine. A real crush which, in addition, prides itself on “green” technology when it stops at traffic lights. But it is in dynamics that it should be preferred.