The first of the Mohicans

Honda offered, in 1988, a pragmatic, well-designed machine powered by a water-cooled single-cylinder, cubing double what was usually encountered in the category at that time. The innovative idea was to provide more driving pleasure and more safety, thanks to vigorous recoveries allowing a good insertion in the traffic.. The first "maxi scooter" was born …. 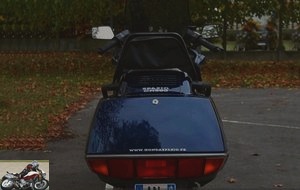 The croup view allows you to understand the low altitude of the whole ! 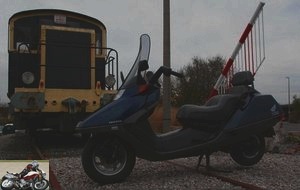 Equipped with two crutches including a central very good, the CN250 also has transparent and smoked side deflectors. 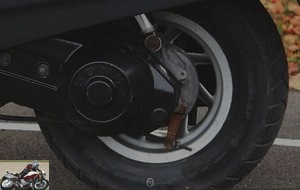 The rear wheel is barely larger than that of a good family wheelbarrow, while the automatic transmission can be customized via a few adaptable parts.. 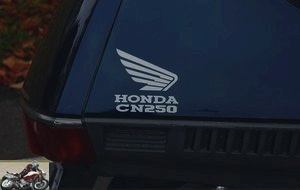 The very good quality of the plastics and their assembly mean that Spazio does not participate in the recycling of sustainable development, it is sustainable in itself..

An exact copy of the on-board instrumentation of all 80’s movie starships, the CN250 displays a host of super handy info, including an oil change indicator light. 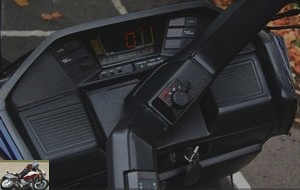 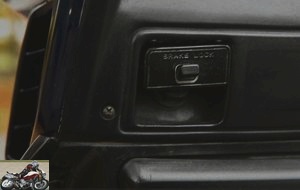 The engine purrs with pleasure in the passenger’s crotch, while the frame is a classic tubular model in the rear part, with conventional double-shock absorbers. 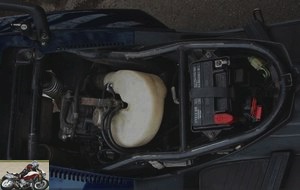 Long as a polar day, low, the Spazio invites its pilot to make his back round the hollows of his large armchair to place his feet far forward. With a very reasonable weight, comparable to that of a 125 scooter, the machine is manoeuvrable and agile. From the start, you feel comfortable in control and a little astronaut thanks to the very futuristic dashboard ….

Stable on its small wheels, capable of squeezing like an eel, the Spazio expresses all of its abilities in the city by playing with traffic jams. Its balance fork has the big advantage of being able to greatly limit the dive in the event of heavy braking. An additional element concerning driving comfort …. 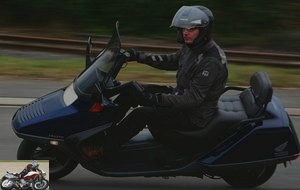 Capable of a top speed approaching 120 km / h, the Spazio has its place on our roads limited to 90 or 110. Its behavior is generally acceptable, even if its shock absorbers bottom out and cause, at the limit, some swaying rather unpleasant …. 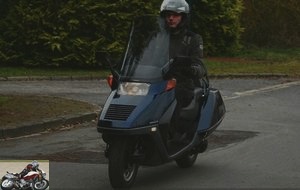 But profiled like a dolphin wearing an Iroquois crest, the Spazio protects rather well ….

The Spazio only reluctantly accepts the motorway. Its windshield is not big enough to protect the rider 100%, its top speed remains too tight to keep up with the horde of motorists and its frame, a bit rubbery, requires serious rodeo sessions in the big curves taken thoroughly ….

The trunk, even if it is not the size of a Mercedes station wagon, has the merit of existing and therefore reassuring the walker. The huge saddle / chair ensures real comfort for the rider / passenger pair. The latter also enough to stand and place his feet comfortably. Undoubtedly, the Spazio appreciates riding two on its back …. 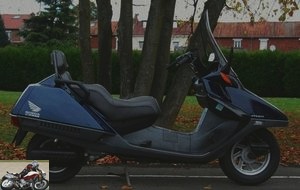 The saddle / chair is commendable, while the wide rear handles make it easy to strap the passenger’s tank top.

Double piston front disc, rear drum actuated by a pedal on the right foot, braking remains quite honorable…. And does not risk causing nausea thanks to the type of fork, akin to an anti-dive system …. 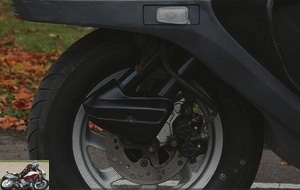 The fork balance locks both dampers when braking, the twelve-inch rim leaving plenty of fingerprints.

3.5 l / 100! And again, without sparing it. The Spazio 250 is really very economical, thanks to its finally quite torquey two-valve engine …. 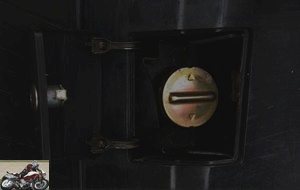 The gas cap is here hidden by a cover, in order to best camouflage this shameless sobriety..

Spazio, spazio … yes, if you do a 49 round head! Because it is difficult to accommodate anything other than a half-jet at the bottom of the trunk. 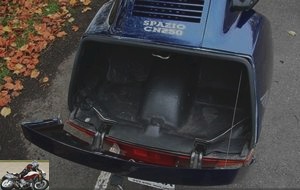 Plastics are omnipresent on the machine, but rather of good quality. The elements are thick and withstand the wear of time, handling and minor incidents well. Although the upholstery of the saddle may end up crying for grace, the foam that covers it remains smooth to the touch and still welcoming to the delicate buttocks. The workmanship of the whole of this scooter is also very good, the assembly of the parts is neat and they remain in good place after a bunch of decades. The windshield and small boomerang-shaped side deflectors do their job perfectly, saving the rider from getting splashed on dull days. The propulsion uses a robust 250cc with automatic timing chain tensioner. A Spazio mill, despite its small capacity, easily reaches hundreds of thousands of kilometers. However, it is necessary to plan to change the engine oil every 3,000 km, due to the small quantity on board, less than a liter and change the rear tire every 6 to 7,000 km. On the other hand, the transmission belt and the clutch rollers easily hold 30,000 km. The clutch itself, which requires regular dusting, lasts 50 to 60,000 km. The front brake caliper also requires frequent dusting, otherwise it becomes unresponsive and hangs. Other recurring concerns on all Spazio 250: the carburetor vibrates during operation and ends up damaging the intake pipe where it is hung. It is then necessary to chock the carburetor after repair; Likewise, the muffler is very easily damaged on entry and it is an expensive part not that easy to find. A good surface treatment is essential both as a preventive measure and after a repair if it is still helpful…

A priori intended for the American market, the CN250 was marketed in the United States and Canada under the name Helix between 1986 and 2001 then, after a small eclipse, again between 2004 and 2007. It is called Fusion in Japan where it is all the rage and is produced for twenty-three years (!), the last vintage being 2009. In France, it only appears in the catalog between 1988 and 1998 because it does not attract as much crowds as in other regions. . 4,131 copies will still be sold during his ten-year career. Despite the different names depending on the year, the only change concerns the adoption of aluminum rims instead of sheet metal ones and there are few, if any, original Honda options. Some accessories from other brands exist, however, such as a higher screen, heated grips, or even a top case ….

Chronology of models available in France 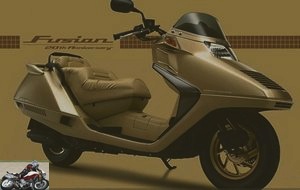 A Japanese model from 2006 in limited series, rather classy ! 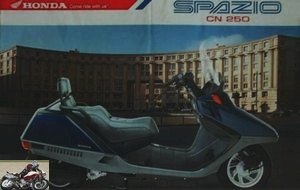 An example of urban traffic, photo taken Place de Catalogne in Paris, one of the least congested places in the capital ! 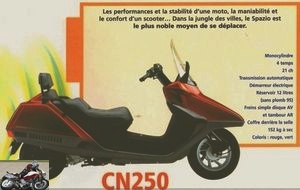 Where Honda tries to promote the motorist who will free himself from traffic jams ….

A model from the end of the 80s that has lived well and requires serious reconditioning is negotiated between 300 and 500 €. For ready-to-drive vehicles from the mid-90s with average mileage and equipped with recent consumables (tires and transmission), prices are around 1,200 to 1,500 €. For very well maintained flawless, we still remain under the bar of 2,000 €.

This practical and pleasant scooter is a treat for regular use. Economical, with irreproachable electricity both in terms of tightness and absence of failure, it also offers the advantage to its rider not to go unnoticed. Its size makes it smaller than it is and its times, as well as its top speed of around 110 to 120 km / h, leave puzzled looks in the audience. Reliable and with a low cost despite the high frequency of return of maintenance operations, it is an endearing machine that never disappoints. All the more reason to reassemble one, especially since the parts of the different vintages are almost all interchangeable with each other, this scooter not having known any noticeable change throughout its years of production…. The very first "maxi scooter" did not usurp its name ! 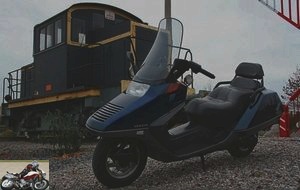