Introduced in 1984, the Honda 500 VF came at the start of the wave that saw Honda bet everything, or almost everything, on this noble and expensive V4 engine. A very interesting model, but little used, which has remained in the shadow of the VFR and its 2-stroke competitors. Essay of an old one that is well worth it… 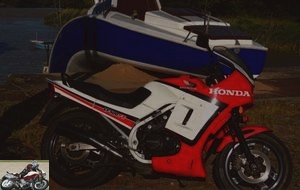 After the “CBX revolution” and its 6-cylinder, the world number one is looking for a second wind to relaunch its range. It is around the V4 engine that this metamorphosis will take place, which revolves around the demonstration of know-how in all directions. The first of this generation, the VF 750 S "Saber" appeared in 1982 as a kind of test run. It is one year ahead of the VF F 400/750 and 1000 which inaugurate the concept of the V4 sport GT. Another year later the VF 500 F arrived, semi-faired, to be followed by the VF 500 FII, the subject of our test, in 1985. Equipped with a full fairing, the FII is more sporty than GT. It’s a small-scale machine that invites more attack than travel, but like any good Honda, it doesn’t go overboard. Well in its time, it displays its modernism by angular lines and a square headlight, very in vogue. Even the Citroën 2 CV got into it, that is to say! The small size of the bike is based on its V4 engine architecture which offers the width of an in-line twin, but the performance of a 4-cylinder, with the ability to rev up very high. Honda is just recovering from the failure of its 500 NR with oval pistons in GP and it’s a bit of a waltz-hesitation between 2 and 4 strokes, witness the 400 NSR unveiled at the same time as the FII. To obtain a power almost equivalent to the 400 NSR (70 against 72 ch), Honda puts the small dishes in the big ones, with a hyper square engine (60X 44 mm), 2X2 ACT, 16 valves and liquid cooling. 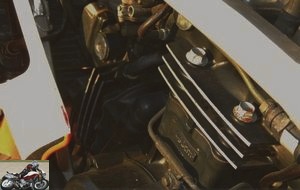 Sophisticated mechanics and therefore more expensive than the competition. A detail that will earn him a relatively short career and mixed commercial success, despite enormous qualities. 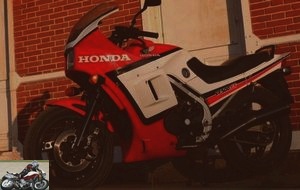 You don’t need a stepladder or straddle your legs to get on this small motorcycle, which is compact, narrow and low in the saddle. The strap handlebars placed above the upper crown offer a less restrictive driving position and the surprise finally comes from the footrests placed a little high and forward, which require you to bend your legs quite a bit to settle down, even if the ‘we are a small size…. unless it’s the habit of trail riding that makes that impression. The dashboard with yellow needles is simple, complete and easy to read. However, it still lacks a gear indicator engaged, which would not be unnecessary. The red zone starts at 12,000 rpm. It’s starting to hurt a lot for a thirty year old motorcycle ! 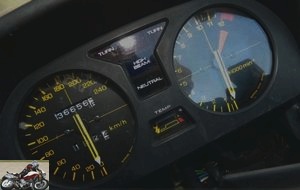 Starter on the handlebars, hydraulically controlled clutch and air-assisted fork. The great luxury ! 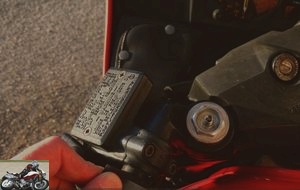 Here no kick, just a starter and a starter on the handlebars. The V4 starts easily and keeps idling after a short warm-up. It climbs briskly in the towers with each rotation of the throttle with a characteristic noise, a little jerky, relative to its particular timing. The gears shift smoothly and thanks to its great flexibility, you take off effortlessly. 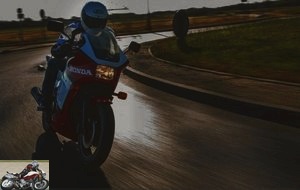 The bust being fairly straight, you fit easily into traffic, without twisting your neck like on a sports car, to see the red lights, when you are stopped a bit. Narrow and extremely manoeuvrable with its 16-inch wheel, the bike sidesteps with ease and the engine is willing to drop to very low revs without complaining, without requiring endless shifting of the selector or clutch. We evolve in a restful universe. At low speed, on the small openings of the throttle, the mechanics are present and to tell the truth, we suffer less than on a modern 600 hypersport. The concept is closer to the current CBR 650 F and in use, its 30 years are not felt. 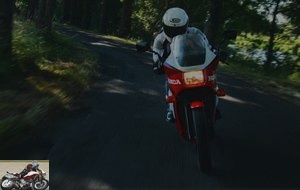 Here no great effusions, the very docile engine climbs endlessly towards the red zone…. and crosses it easily if left unchecked! Sometimes you go over 13,000 rpm unintentionally if you are concentrating on the road. The revs are not spectacular, however, the mechanics are very linear. At the very bottom of the tachometer it is surprisingly full, then after a slight dip, the needle flies off, with a very bearable noise emitted by the 4/2 escapement. It is not sensational, but if we look at the needle of the speedometer, we realize that we very quickly arrive at unsavory speeds nowadays, without realizing it thanks to the good protection offered by the fairing. 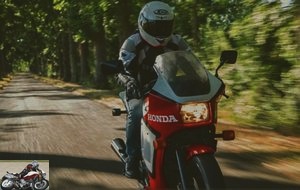 140 km / h are commonplace and despite her age, Miss VF could earn you a few points on your license. Road holding is excellent thanks to the quality of the suspensions which combine comfort and efficiency. The wheel of 16, preceded by its bad reputation, is by no means drooping. On the contrary, thanks to its reduced gyroscopic effect, it allows rapid and daring maneuvers. The front axle behaves very well and if the braking was more biting, we would easily adopt hellish speeds in complete relaxation. In addition, the reasonable weight (201 kg all full) and the good distribution of masses facilitate sharp changes of direction.. 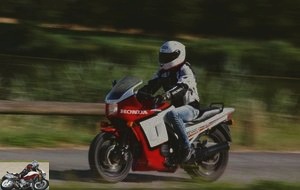 Timed at just over 200 km / h chrono by the written press when it was released, the little 500 has the answer to face the long stages without suffering. Admittedly its V4 runs a little fast, but it is made for that and does not risk anything. The very correct protection of the pilot makes it possible not to suffer, while the good natural balance of the engine does not cause unpleasant vibrations. The 17L fuel tank allows for decent range and ultimately the only downside is the slightly marked sensitivity to crosswinds, undoubtedly exacerbated by the 16-inch front wheel, which is more lively than stable. Sometimes you can feel slight forward movements, which never take on spectacular proportions. 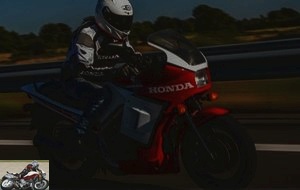 With passenger footrests not too high, easy access and a generous grab handle on the backrest, the VF 500 is relatively welcoming to its passenger. The naturally docile engine will not rush it and the vibrations are contained. When going on vacation, it will be difficult to secure a load for two, but without a real backrest saddle, your companion or traveling companion will not have the feeling of being on an ejection seat. Modern sports can benefit from this! Another pleasant surprise was the quality of the suspensions which have valves to correct the preload pneumatically at the front and at the rear. Honda didn’t have a shit, we tell you. The rear shock absorber is even adjustable in rebound ! 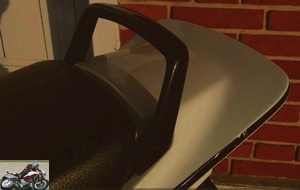 The icing on the cake: the anti-dive…. which is useless, or not much, for the pilot, as for the passenger.

The rear shock absorber pneumatic preload adjustment valve is hidden behind the side cover. 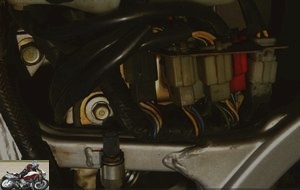 The left calliper mounted on a joint pushes a rod which brakes the hydraulics of the fork as an anti-dive. Notice the wheel of 16.

This is where the shoe pinches. Certainly our test bike would undoubtedly deserve a good bleed, even braided hoses to gain some bite. The control is spongy, due to the lack of old fluid and swelling hoses, but also to the lack of anti-diving which softens the handle / caliper connection, by parasitizing the signal. It is in fact the left mobile caliper which pushes a piston during braking to act on the damping. The 3 position setting should preferably be left at 1, as this is where the negative effects of the device are felt the least, which has hardly any positive effect. Behind on the other hand, everything is fine, the single disc does the job perfectly. 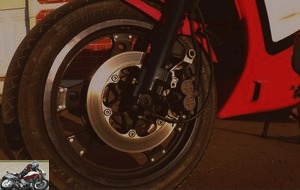 The consumption of the machine remains reasonable if you do not artill too much, count 5/6 liters per hundred. By opening the throttle hard, you will climb to 7 liters. 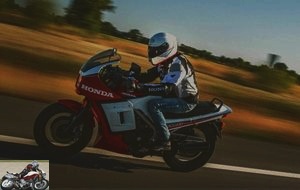 For maintenance, nothing special, it is a robust and undemanding four-stroke. It will still be necessary to reckon with an average mechanical accessibility. This is to be taken into account in your execution times or when paying your invoices. The pawl distribution allows the valve clearances to be adjusted by nuts / locknuts. So there are no tablets to replace or pay for. That’s less. Note the relative weakness of the clutch springs, only 4 in number, which tend to easily slip the discs. A reinforced spring kit seemed to exist at the time. For tires, the choice is limited due to the 16-inch front wheel and the narrow 18-inch rear rim. Our test bike fitted with Bridgestone BT 45 handled it very well ! 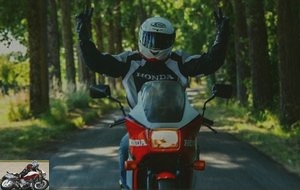 The vee of victory? in the trials of the time yes, but in the dealerships…. much less !

Rare, the VF 500 F2 is not well known enough and did not mark enough people to go uphill. A motorbike in very good condition will rarely trade above € 2,500! An excellent quality / price ratio considering the on-board technology. An incomparable price with an NSR 400, or even the RG 500, contemporary sports machines, much more expensive to buy and maintain today, but Ô how much more media. Yet the VF 500 is much more usable on a daily basis, much more contemporary; but despite her 30 years, she lacks the (bad) character to become a legend. A purist motorcycle, reserved for a few aficionados who know it, but which will pleasantly surprise all those who take the step of going towards it and trying it out.

The technical sheet of the Honda VF 500 F2