When Honda introduced the Fury in 2009, no one believed it … what could have prompted a Japanese brand to create such an extreme motorcycle today? And in fact, Honda is the first Japanese manufacturer to enter the niche … 30 years after the first models appeared in the United States. Because it is there that these motorcycles were born, just after the war when the youth were in search of thrills and speed. Harleys of the day were fast but too heavy. They had to be lightened as much as possible, the young people therefore began to "Chopper", removing all the superfluous to gain weight….

Characterized by their long fork, adapted to the main US straight lines, the Chopper quickly stood out from other productions to become a style in its own right, with great reinforcements of customization, chrome, specific paints and engine parts machined to the hand.
The Honda Fury is in this lineage! Really as extreme or accessible to ordinary people ? 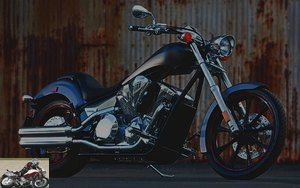 No frills, no central stand, no heated grips, no rev counter and especially no engine speed at 14,500 rpm. No môsieur! That big hairy good with lots of chrome and plastics – rocker openers, filter cover, side casings – that shine. The Fury is easily distinguished by a rather slender line and pleasing to the eye thanks in particular to its water drop-shaped tank which still contains 12.8 liters of fuel. Its big 200 mm rear tire and its fork which go there in front as if to say "-look at the road man, it is there in front of you and me, I’m going to do it easy rider way!" complete the picture of these motorcycles not like the others.

Aesthetics are like fashion, we like it or not! For this VT 1300 CX – we prefer its code name Fury – it is enough to leave it a few moments on the sidewalk to immediately see the onlookers lean over its fuel tank and look for the mark. The effect of surprise is total. "Is it a Honda?" No ?! From a distance it is such a mistake … ». Honda comes to hunt on the segment Big Chopper stripped but with all the technology: electronic injection PGM-FI with automatic choke, digital 3D ignition with electronic advance, ABS, shock absorber adjustable in preload and rebound, coded key … stripped, but it’s the tip below!

The engine is an almost traditional liquid-cooled bycinder, 4T, SOHC, with 6 valves please! No belt here but a gimbal.

On its side crutch, the beautiful imposes by its length. The impression of mass is present. 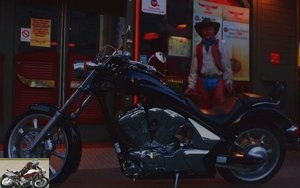 I sit on his handlebars and for my 1.88 cm the ground is found closer than ever, especially given the height of the saddle, which rises to only 678 mm. Even small riders will find the ground easily, despite a wide saddle. The clutch is cable but its lever has no adjustment system, just like the brake lever..

The seat on the motorcycle makes that the legs are found very close to the top engine. In winter, everything is fine. I would be curious to see in summer and in the city moreover, because I fear that in the event of strong heat, the pilot suffers from the rise in temperature of the engine.

I insert the ignition key on the left side of the motorcycle. 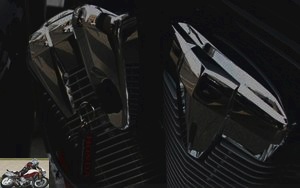 The needle makes a 180 to initialize and give the green light to engage the starter. The two superimposed pots on the right make a deaf and nice sound. There is hardly any vibration.

Ouch! I want to switch on the first one but I forget that the left leg has to unfold to get the selector.

Once the first one has started, I have a little apprehension that squeezes my throat. The driving position and the weight of the beautiful (303 kg fully loaded) are not there to reassure me. An adaptation time is necessary to assimilate the technique and the riding position of the VT 1300 CX. Especially, if like me you have never rested your seat on this kind of machine.

But once started, the magic happens. The initial impression of heaviness disappears to give way to surprising handling. Thanks to its wide handlebars, a simple pressure to the left or to the right allows the bike to be placed where the eye is. Obviously the ground clearance will slow down your enthusiasm quickly, but the philosophy of this bike is not the attack on every small pin! Though…

The 1312 cc engine only delivers 54 horsepower but the torque is there. In second gear, you’re on a cloud and if you turn the grip the right way, the beautiful atomizes a number of two wheels. If the clutch requires grip, the gearbox does not suffer from any criticism … just punctuating the first with a big snap so dear to big customs. 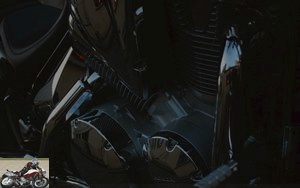 In built-up areas, you will not need to play with the selector because the torque allows you to stay in second or even third gear with complete peace of mind. On the other hand, forget the gymkhana in case of too strong influence. The maneuverability at a standstill or at very low speed is not its strong weight, you risk some problems if you attempt a U-turn without preparation; the operation becomes laborious because it tends to embark with its enormous front fork caster angle. My time, after a few days and experience on the handlebars, the maneuver is finally done almost easily.

Overloaded peripherals in our cities are commonplace. Despite everything, it pulls out of the game by slipping with surprising agility between the lines without too much difficulty despite its wide handlebars. On the other hand, side shows, there’s no better! All eyes converge in your direction as you pass by and the ego sparkles like the chrome of the beautiful.

On the highway, the architecture of a Chopper is not made to drive at high speed for hours. Even if its small bubble (optional) protects somewhat, you will give up control after a few moments … despite the 175 km / h it can theoretically take.

With your back firmly against the saddle reinforcement, you decide to put gas on to overtake? The Fury will respond to your request with a muffled exhaust noise without its engine being very demonstrative. Especially on the last report (gearbox 5), do not count, cut the throttle and restart … it only resumes if you enter a gear. Sports-style covers are not his cup of tea. There, you are far from its niche. Yet the speedometer needle rises well above the limitations provided for by the highway code (but largely eh!) Without one having the impression that the engine is screaming or dying in the towers..

The stability even at high speed is not lacking and the big curves are swallowed without flinching. Long motorway journeys do not scare him. It will be the rider who will be forced to make frequent stops in view of the driving position, despite an acceptable saddle comfort. In fact, it encourages driving and respecting the 130 km / h limit.. 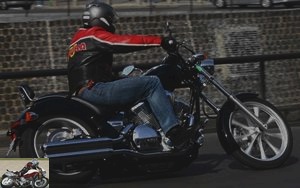 On departmental roads, the Fury is immediately to its advantage and expresses itself fully. The times to overtake another vehicle are straightforward and are done without the slightest worry. The engine torque responds present and the ideal cruising speed fluctuates between 90 and 110 km / h.

One of the strong points that the competition does not have and which at the time of the purchase makes take a position, is its gimbal. I never felt the slightest discomfort or snap from it. He knows how to be completely forgotten, just like the usual maintenance. 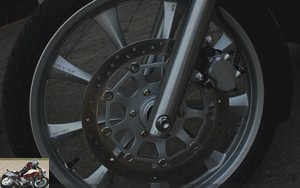 Despite a single 336 mm diameter front disc clamped by a 2-piston caliper, the latter is firm but lacks bite from the attack. The rear brake, 296 mm in diameter, clamped by a single piston caliper, does not only make up the figure, just helping to stop the 303 kg le la belle.

The front fork does not tend to dip when braking hard. Its rear mono shock absorber adjustable in preload and rebound does an excellent job, a bit dry, but on degraded roads it effectively absorbs shocks.

The cycle part is a rail and the whole does not come apart during a rapid change of angle. Details that are important such as the good visibility of the mirrors or more basic but effective, the horn, which gives the impression of coming from a Californian truck. The night counter block is not the most readable. 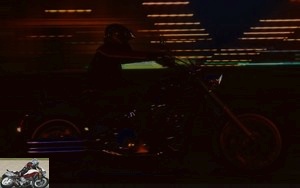 When parking, I wanted to insert the key to block the steering. Just like older models, the Neiman sits between the fork and the tank on the right side of the bike. I have never been able to lock the handlebars … fear of forcing and breaking the tiny key in the lock. According to the chief mechanic at Honda France, the maneuver is done … by looking for the right angle that allows the key to turn. 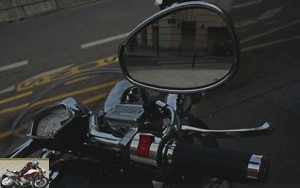 Please note that you will have to carry your anti-theft device because there is no place anywhere.

With a test carried out with a road / motorway / national mix, consumption is around 5.4 liters per 100 km. This makes it possible to cover at least 200 km before refueling. I would have liked to have a fuel gauge, because if driving gets nervous (if you never know !!) it is better to plan and know. 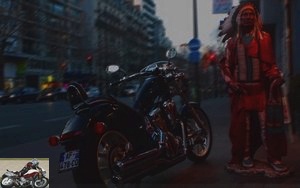 The Fury is a motorcycle made for big nationals but also and above all for rolling on small departmental ones. It will satisfy the lonely; lovers will share just a few kilometers, so as not to get divorced before their time, despite the sissy bar.

In the end, this Fury will surprise more than one with its road behavior and its finishing qualities. Choppers aficionados will have to count on it because its price of 14,990 euros remains, all things considered, very attractive for its engine capacity. I will have kept it for a few more days, just to remake the film for myself…