The Honda Pan European ST is Honda’s 1989 response to BMW for a GT roadster that can cut miles in comfort without investing the price of a GoldWing. First presented in 1100 cm3, it will evolve deeply in 2002 with in particular an increase in displacement to 1300 cm3 then will benefit from significant technical but above all aesthetic improvements in 2008 which mean that it has in the end not lost a wrinkle during all these years. What about a model celebrating her 2nd tenth birthday in 2013? ? 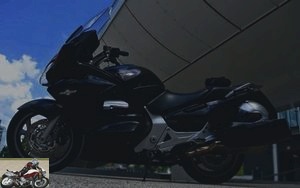 With such a story, everyone knows the Pan, as they say. Long-haul vessel, the ST 1300 stands out due to its size, which makes the BMW K1200RT and Yamaha FJR 1300 seem like half-portions. In fact, it is much more mass-related to the K1600, which appeared much later. Long, wide, it is despite everything almost light for its category with its “just” 329 kilos fully packed. And about full, it carries 29 liters precisely. For all these years, we have consistently distinguished the characteristic twelve-star logo on the grille.. 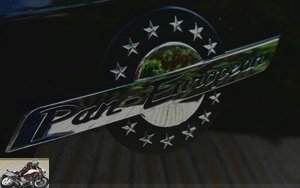 If the general line has changed little since 1989, which makes it invariably recognized from all current production, it has received several facelifts, especially at the front end. So she stays young with a look that is reminiscent of the VFR. 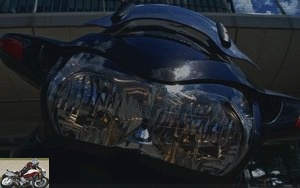 Under the very encompassing fairing, showing just one end of the engine, you could almost believe that it is equipped with a 6-cylinder. But no, it just has a 90 ° V-4 with dual overhead camshaft, 16 valves with the brand’s beloved PGM-FI electronic fuel injection. The shaft transmission (cardan shaft) guarantees longevity and reduced maintenance for a traveler who aspires to cross Europe. Combined ABS braking is the final touch to safety. 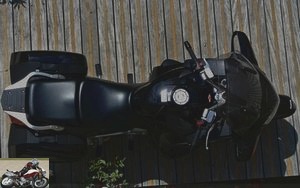 The 1.70m rider barely, but really barely touches the ground with his toes, in part due to a comfortable but relatively wide saddle in the standard position. Fortunately, the latter can be adjusted between 775 and 805mm. In the low position, the same pilot puts the tips of his feet and this simple difference facilitates operations at very low speed. Conversely, the ST 1300 is easily raised for the same pilot. He then discovers a vast dashboard, which is more like the automotive world than that of the motorbike with two huge counters for speed and tachometer, while on the right an orange backlit auto-type screen. displays all the information from the on-board computer: fuel gauge, clock, instantaneous consumption, partial double trip, totalizer, engine temperature and exterior temperature…. Everything is extremely readable, even under strong sunlight. Note the electric adjustment of the headlight. On the other hand, no 12V socket, no speed regulator or traction control. 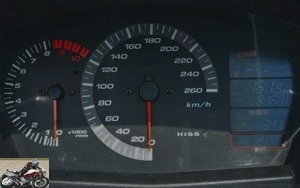 On the left stalk, we find the button to adjust the electric bubble, adjustable in height. And we don’t forget the warnings. 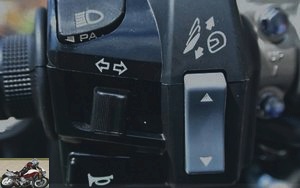 It’s wide in the center, but you can squeeze it well between the thighs. The position allows you to have a straight bust. When stationary, with your feet barely touching the ground, you are careful, especially since the handlebars are ultimately quite narrow and do not offer much leverage. The first kilometers of hours are therefore done with caution. Of course, the Pan comes with crankcase guards that are beautifully integrated into the line, but that’s no reason to put it down. 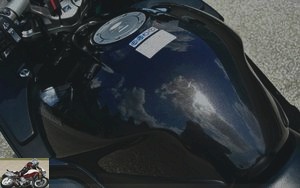 The Pan European snorts with a deep gasp of a turbine that is not unlike some 3 cylinders. It’s serious, velvety and deeply captivating. A kind of deep and quiet force then emerges, like a message and a promise for a very long, distant and safe road..

And then, once launched, we forget the pounds. It would even be almost light with maneuverability from 10 km / h that allows you to take it without thinking, smoothly. The box is easy and precise and is totally forgotten. Only the clutch handle is a bit hard and allows you to do a weight training exercise in the city when you do not have to come down to neutral when stationary. 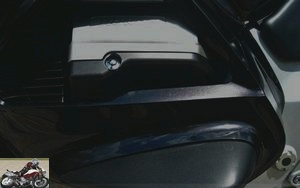 Red light, stop, start. The overall weight means that the starts are straightforward. We could even find the times a little brutal on the first two reports. But his overall demeanor doesn’t encourage playing with it, especially since one has the distinct impression of being fast right away. Large with its 860 mm, it is above all its mirrors at the same level as those of the cars that lead to staying more often in the flow of traffic than trying to zigzag between cars. And yet, the front axle is particularly neutral and allows easy maneuvering. Interfacing is possible on expressways, but difficult in city traffic jams, only because of the width of the whole, rather than being overweight. Regardless, you are well seated, well wrapped up in your overall size and time takes on another meaning where speed is no longer a virtue. It will find its limits at the end of a somewhat narrow street where the U-turn will require more effort and concentration than those achieved with an F6B. The look is important, you have to turn your head well, and maintain enough gas to not get carried away. The first few days of getting started are a bit tricky and then you get used to it and gain confidence to finally realize that it doesn’t take as much effort as it did at the beginning. And all the more so since the V4 is an example of flexibility, accepting to resume at any speed, without hiccuping or snorting, and whatever the speed, thus able to wind on the 5th and last report to 30km / h. You can drive in town at 50km / h at 1,500 rpm. The daily pleasure is really extraordinary…. if not the weight felt as soon as you come back to close to 0 km / h.

The Pan European takes off on the motorway with speed and never seems to want to stop…. running straight and approaching large curves as riveted on a rail. At 120 km / h, it is still only 4,000 rpm, or below half of the rev range possible. We can accelerate again and again or on the contrary make the throttle without parasitic movement…. in the absence of wind and top-case. Sidewind grip is important and if you find yourself on a windy stretch of highway, driving feels blurry and rippling at high speeds that encourage you to give up your hand and return to legal speeds. . A feeling mainly present in solo and in strong winds and in a straight line. Crossing a protected area at the almost maximum speed of 230 km / h at 8,000 rpm will, on the contrary, give a feeling of safety and impeccable road holding. It will be the same on large curves at high speed where it fits on a rail without parasitic behavior.

The bubble height adjustment is particularly useful here in order to vary the pressure according to the pipe, the size of the pilot and the speed. But even in the high position, the bubble does not generate any eddies in the helmet or infrasound, as can be seen on other models.

We can thus inquiller 450 kilometers without the slightest stop, in peace, on the 5th and last report. It just lacks the radio in fact …. 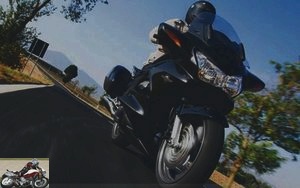 The Pan is just as much fun on small roads and on secondary roads, with a rhythm alternating depending on the mood of the driver between dynamic driving in the laps or cushy pace at 2,000 rpm in the last gear. If the turns are tighter, of course its weight means that it takes its crew a bit, but a simple pressure on the brakes and on the handlebars and the trajectory is adjusted with confidence, even on the angle. ST offers possibilities for improvisation at this level that few models of this size allow. And at the end of a bend, there is always enough under the accelerator to restart the machine without thinking about it. 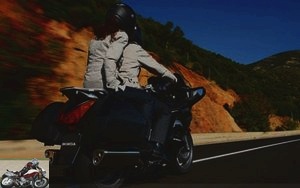 The saddle is pleasant and is comfortable, both for the pilot and for the passenger. The defects of the road are particularly well erased, even in the event of major degradation and without being flexible. The smooth saddle is really smooth but that’s a daily detail. 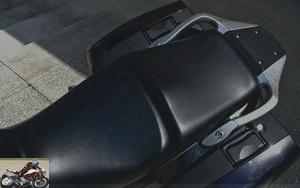 The Dual C-ABS allowing to combine the front and the rear, usual at Honda, still works wonders with an efficiency still present, despite the debauchery of electronics of the competition. As a result, it brakes well and hard with a good feeling and always in line, without ever stepping out. Braking is thus largely up to the machine and its ambitions.. 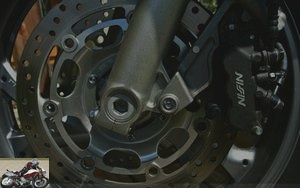 The on-board computer is scary in the city, easily climbing to instantaneous consumptions of around 18 liters / cent. Obviously, the first is sufficient on its own in town and we spend at most the second. Suddenly, half of the fuel gauge arrives from 160 km. Consumption goes down to a reasonable figure on departmental and oscillates between 6 and 7 liters per hundred, which remains reasonable for the cubic capacity. At a stabilized speed and 90 km / h on the national road, it can even stall on 5 liters per hundred. Suddenly, with the 29-liter tank, it is quite possible to envisage long trips of more than 400 kilometers, or even 450 kilometers especially with a cool driving on departmental roads, the 4 cylinders allowing without worry to be on the last report to 3,000 rpm. As soon as the motorcycle falls on reserve, the indicator indicates the number of estimated kilometers remaining.

The two side cases offer an excellent capacity with their 35 liters. They are especially better integrated into the bike (and therefore less wide on the outside) than on other models, which makes you less afraid of not passing.
The saddle can be adjusted to three positions very easily. Just lift it up, choose one of the 3 notches at the front and wedge it to one of the 3 notches at the rear. The operation takes just over a minute. 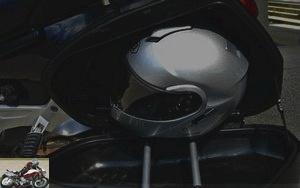 It’s not the funniest bike, nor the most technological compared to the competition which has evolved more since. The Pan European, on the other hand, confirms its reputation as an excellent GT capable of swallowing the kilometers in solo and duo effortlessly and with comfort. Officially 2,000 euros cheaper than an FJR 1300, it can be negotiated even less at dealerships, positioning it at the best quality / price ratio on the market, and all the more so with Honda quality. And yet, it is a far cry from a second choice with day-to-day performance having little to envy much more expensive models. An excellent choice for those who want to travel far in peace.