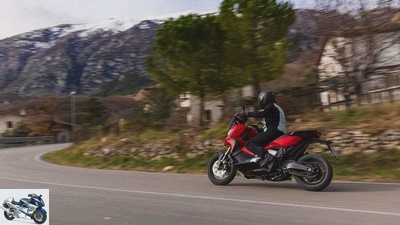 1/19
The Honda X-ADV is the craziest crossover ever. 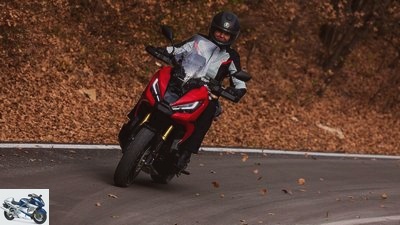 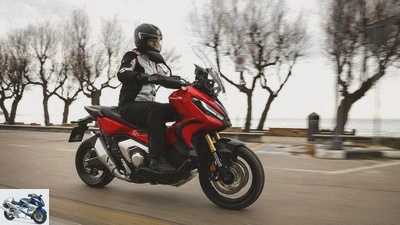 3/19
The extremely active and imposing part impresses with fine technology and cool optics. 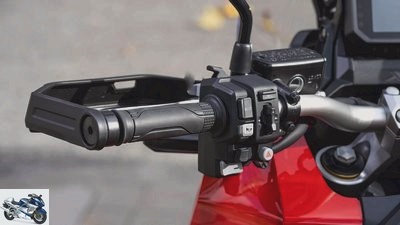 4/19
But it can also be switched manually. With the white switch it goes down. 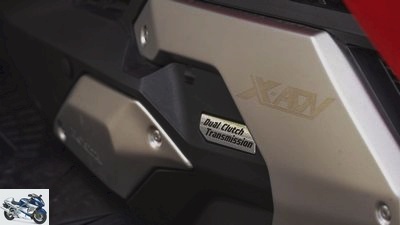 5/19
The Honda X-ADV rolls up with a dual clutch transmission. 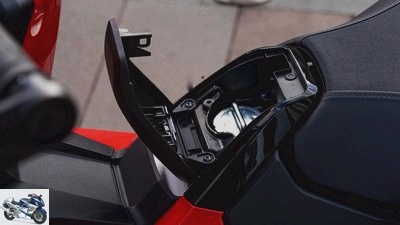 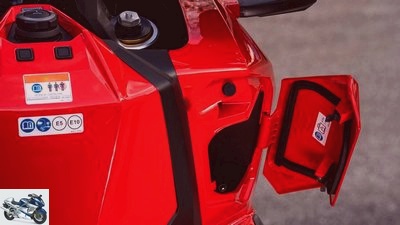 7/19
Here you can see the new, lockable glove compartment of the X-ADV. 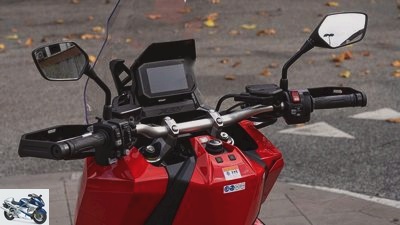 8/19
Switch and Walt control center of the Honda X-ADV. 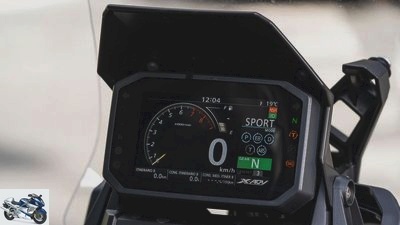 9/19
The state-of-the-art TFT display has many setting options and connects to the smartphone. 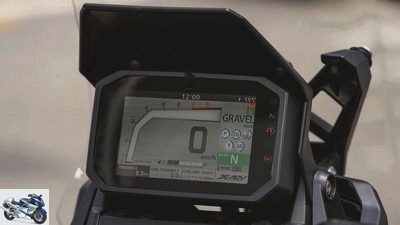 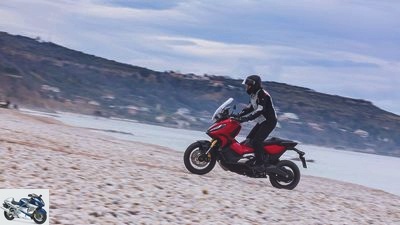 11/19
The traction control then only intervenes minimally, as does the ABS. 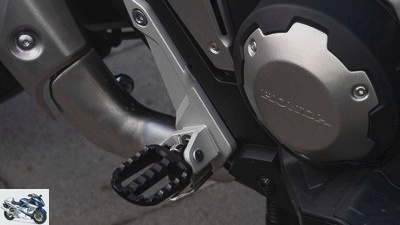 12/19
Footrests in an off-road look are optionally available for the X-ADV. 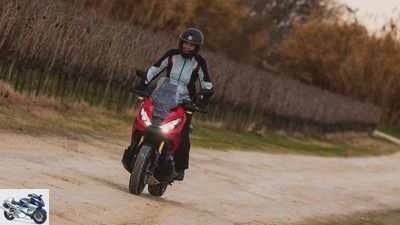 13/19
Driving through the terrain standing up is then possible. 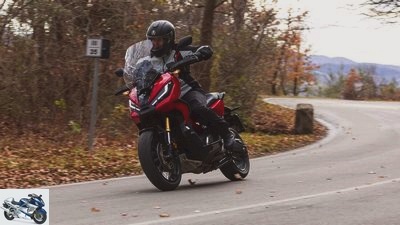 14/19
The pegs also help to achieve a sporty seating position on asphalt. Put your feet on the pegs, put your arms up and your upper body forward – and the X-ADV adds a bit of dynamism 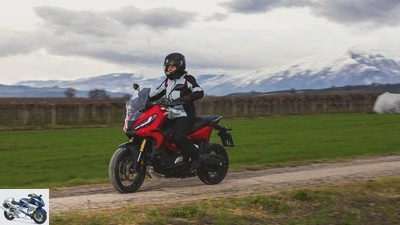 16/19
The engine sounds pleasantly quiet, but develops a rhythmic pulsation that sounds suspiciously like V2. 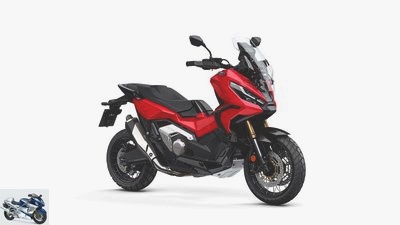 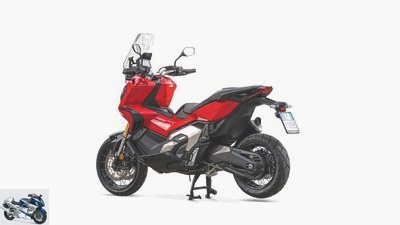 18/19
Technology and workmanship justify the price. 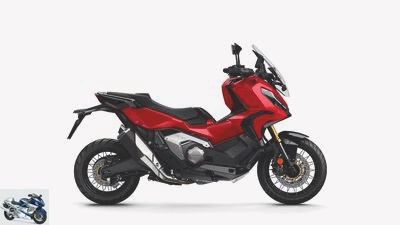 19/19
The X-ADV sells quite well in southern Europe, but not (yet) in Germany.

There were motorcycles and there were scooters – until the Honda X-ADV 750 opened up a third dimension. With the latest revision, Honda has given it even more motorcycle genes. The original concept has so far not been able to establish itself on the German market. Why actually?

We motorcyclists like to think of scooters with a mild smile: they are very nice and certainly practical, but not for us! The Honda X-ADV however, makes anyone who ever moved it puzzled. Because it drives like a motorcycle and almost looks like one.

From the front, the Honda X-ADV is reminiscent of the Africa Twin, which is no wonder, because both come from the Italian designer Maurizio Carbonara. He drew the 750 two-cylinder for the update now slimmer and sharper. This challenging look alone makes you want to jump into curve battles on the spot. In addition, there is an emotional sound that the Euro 5 adaptation could not harm. The engine sounds pleasantly quiet, but develops a rhythmic pulsation that sounds suspiciously like V2. But under the plastic cover is a row twin, which with its 270-degree crankshaft perfectly imitates the sound of a 90-degree engine.

Even getting on works like a motorcycle. Nothing with a scooter-like step-through, but up your leg and swinging over the tightly padded, 82-centimeter-high bench of the X-ADV. Honda has renewed this and rounded the shoulders so that even smaller riders can safely put both feet on the ground. But ground contact is not required now, the tester is almost scratching her feet in anticipation. So, put it on the running board – here it is, the scooter character! – and off to the test in Abruzzo in central Italy.

New on the Honda X-ADV is the ride-by-wire system, which is now accompanied by driving modes, which in turn are coupled with the dual clutch transmission (DCT). That sounds complicated – which it certainly was for the developers – but it works extremely well in practice. The mode fits on the long, wide beach promenades near Chieti on the Adriatic Sea, where the test drive begins “default”, with which the automatic shifts up relatively early and thus tames fuel consumption. According to Honda, it should be 3.6 liters on average, moderate for such a large and heavy vehicle, because despite a small diet during the update, the X-ADV still weighs a hefty 236 kg.

You don’t have to switch, but you are allowed to

Relaxed cruising works perfectly in standard mode. Simply stretch your feet forward on the running board and lean back slightly to enjoy the view of the Mediterranean. But soon the scenery changes on the way to the high-altitude, wild Majella National Park, where there are not only wolves but also brown bears. On the steep, often winding and bumpy roads, the 59 hp is enough, but the mode fits “default” not really anymore. It’s a good thing that Honda also provides manual shifting, namely via a switch on the left side of the handlebar. Aim at the curve, downshift with your left thumb, let the engine brake act – and into the inclined position. No other scooter can do that.

The tester was an avowed DCT skeptic

It works even better in the tumult of curves in the mode “Sports”, with which the Honda X-ADV almost always switches when you would do it yourself. Amazed, the author – so far confessing DCT skeptic – lets Honda’s dual-clutch transmission do the shifting. It couldn’t be more precise, quieter or more jerk-free – big compliment.

With the shorter lower gears and four more horsepower, the Honda X-ADV allows a crisper pace than before, especially with the accessory footrests (around 350 euros). The seating position then corresponds to a sporty mid-range motorcycle, the forward-leaning upper body shifts the center of gravity, control works even better, and the adjustable fork offers a lot of feedback anyway.

The footrests are also intended for off-road excursions for which the driving mode is required “Gravel” are. The traction control then only intervenes minimally, as does the ABS. But even if the Honda X-ADV feels playful at first on gravel: Inexperienced users shouldn’t overdo it, if only because of its weight. In addition, the suspension travel is not really off-road.

The scooter character is basically only served by the running board, the 22-liter storage compartment under the bench, the new, lockable glove compartment in the leg shield and the small 15-inch rear wheel that makes the storage space possible. Otherwise, the look and equipment correspond to a modern motorcycle, from the driving modes to the transponder key, from the daytime running lights to the ultra-modern TFT display. The 59 hp are enough for a top speed of around 170 km / h. Honda also offers accessory packages from “Adventure” (from 1,100 euros) to “Travel” (2,349 euros). Not cheap. But that is not the Honda X-ADV either: With ancillary costs, 12,220 euros are due for it. The technology and workmanship justify the price, but the motorcycle version NC 750 X, which is based on the same platform, is available for almost 4,000 euros less.

Which brings us to the initial question: The fact that the concept, which is as unusual as it is successful, has not yet caught on in Germany is probably due to the price. But not only, because the X-ADV sells quite well in southern Europe. But the rifts between scooter and motorcycle riders are not as deep there as in this country.

The revised Honda X-ADV is more mature and versatile than ever. It inspires on the country road, offers plenty of wind and weather protection on the motorway and practical storage space when shopping in the city. Just a scooter – it’s actually no longer that.